If you are thinking of welcoming a chameleon into your home and don’t know which one is right for you, then continue reading to find out detailed information on two of the most common chameleon pets, the veiled chameleon and the panther chameleon.

Veiled chameleon can live between five and seven years in captivity with the right habitat, diet, lighting, and temperatures.

Panther chameleons tend to live between three and seven years in captivity. Their health is determined by the care you provide while living in captivity.

With proper care and clean habitat, both chameleons can live up to seven years in captivity.

The veiled chameleon is not a heavy-bodied reptile. Males tend to weigh between 120 grams and 250 grams with females being slightly smaller, weighing in at between 85 grams and 180 grams when fully grown.

You will find that the female panther chameleon is also smaller than the male. Males tend to weigh in between 140grams and 180 grams with females weighing between 60 to 100 grams.

There isn’t much of a weight difference between the veiled and panther chameleons.

A healthy male veiled chameleon can grow up to 24 inches (61cm) from its snout to the tip of its tail. Females are smaller and grow up to 14 inches (35cm). Females bodies tend to be thicker than the male.

Male panther chameleons can grow up to 21 inches (53cm) with females growing up to 13 inches (33cm).

You will find that when a veiled chameleon is at rest, it is a light green with a faint pattern on the side. Young stay this color until they are older and their brighter color patterns start to come through.

Panther chameleons show off a bright emerald green, blue green, or turquoise body. Often their lips are bright yellow or white and they have red or gold around their eyes.

They are colorful and exciting to watch as they change colors based on their surroundings and certain circumstances. 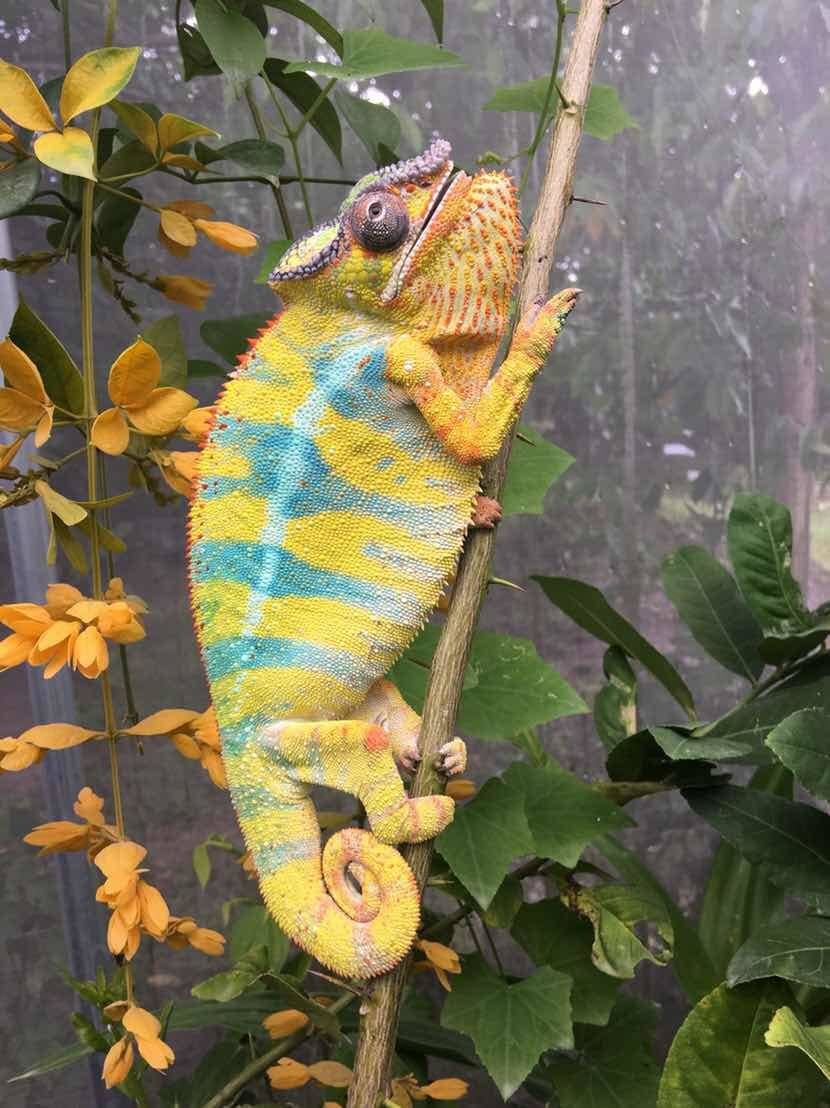 The panther chameleon has awesome coloration and it is amazing to watch them grow and their colors come out. Veiled chameleons do develop brighter colors with age, but the panther is brighter from birth.

Veiled chameleons love to sleep and will sleep a full twelve hours a night. During the day they will be active, exploring their enclosure and hunting for food, along with spending hours basking under their UV bulb.

Panther chameleons are also active during the day, making them fun reptile pets to watch and enjoy.

Both the veiled and panther chameleons are diurnal, which means they are active during daylight hours, soaking up the UV rays, hunting, and exploring. They sleep when the lights are turned off.

Panther chameleons enjoy a diet of insects with crickets being their staple diet in captivity. They also enjoy locusts, roaches, butter worms, silkworms, flies, and grasshoppers, along with mealworms, super worms, and wax worms on occasion.

Panther chameleons tend to be easier to care for with an insect-based diet. The veiled chameleon will need a more varied and balanced diet of insects and greens.

A veiled chameleon should not hibernate (brumate). Living in captivity, their enclosure temperatures remain at optimum, ensuring their lives remain as normal.

It’s not uncommon for them to reduce their feeding when it’s winter due to slight temperature changes. Their appetite will return when winter is over.

Panther chameleons also shouldn’t need to hibernate when kept in captivity. If they decide to hibernate it could be a sign of a health issue.

If your panther chameleon is showing signs of brumation, take them to the vet to be diagnosed and treated.

Ensure you have optimum diet, lighting, and temperature inside the enclosure.

If you maintain the enclosure at optimum, there is absolutely no reason why either of these chameleons will brumate.

Related – What is hibernation and do chameleon hibernate?

Veiled chameleons have very distinct personalities, often they come across as grumpy and aggressive. Many are shy and some may be friendly. The good news is that they can be tamed, based on their own individual personality. 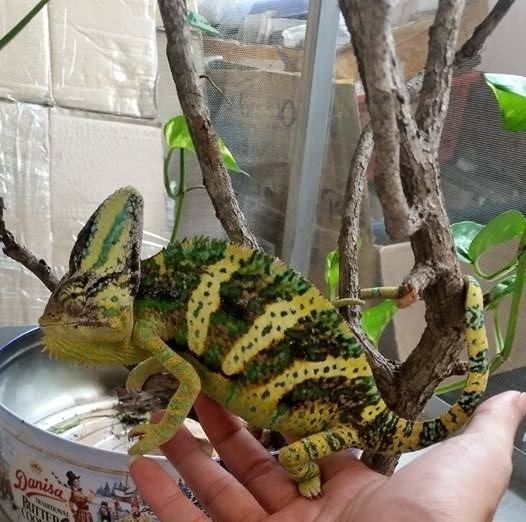 Panther chameleons have their own personalities that can be outgoing, friendly, or shy. They are very intelligent and soon learn your schedule, they will develop expectations when it gets close to feeding time if you remain on a consistent schedule.

Panther chameleons tend to be friendlier and more outgoing than the Veiled chameleon, though both can be tamed with patience and both will learn to climb on your hand when you put it in their enclosure.

Adult veiled chameleons will not enjoy being handled and are best when watched. They may display an open mouth, even hissing, while inflating their body to look bigger than they are.

Some reptile owners have reported that their veiled chameleons have tried to bite them when they feel threatened.

Handling your chameleon from a young age will get it used to you and reduce the risk of it being aggressive towards you.

Babies tend to be docile and easily handled. Though they may try and walk away from you if you try and force them to climb onto your hand.

Feeding your baby by hand is a great way to build trust and get your chameleon to get to know you and feel comfortable with you. This also helps to reduce stress when it comes to being handled.

Panther chameleons tend to find handling very stressful. As with other chameleons, they will be aggressive when there are two males housed in the same enclosure. They may change color and attack each other.

Aggression is sometimes seen in males on their own in a glass enclosure where they get angry with their own reflection, thinking it’s another male moving into their territory.

Both the veiled chameleon and panther chameleon will show aggression and are very territorial. You cannot put two males in the same enclosure.

Overall, they tend to be calm pets, which will make use of their entire enclosure, keeping you entertained with their daily antics.

Related –How to tame an angry chameleon

Veiled chameleons are not cuddly pets and are not keen on being held and petted. It’s best to encourage your chameleon from a young age to climb onto your hand without stress.

Panther chameleons are also best viewed in their enclosure than being handled and petted. Patience and consistency can help you grow a bond with your panther chameleon, getting it to climb on your hand with confidence.

Chameleons are not pets you want to hold and pet. They are great when viewed in their enclosures and with the right patience, they can be encouraged to climb onto your hand.

You will want to create the ultimate enclosure for your new reptile pet. The minimum size is 24 x 24 x 48 inches. The enclosure must be taller than the length and width.

Any smaller and your chameleon will not be very comfortable. Remember that your chameleon prefers being in trees above ground, so focus on the height of the enclosure.

The panther chameleon requires the same size enclosure as the veiled chameleon. Height is your main priority with an enclosure that is 24 x 24 x 48 inches in height.

You do not need a smaller enclosure for a baby and increasing in size as it grows, you can start with this enclosure size from the start of your chameleon owning journey.

Don’t skimp when it comes to enclosure size. Choose the biggest size from the start. It saves you money in the long run as you won’t need to buy a number of tanks during your chameleon’s life. Choose the best enclosure you can fit in your space.

Veiled chameleons are cold-blooded, which means they rely on their environment to control and regulate their body temperatures.

Chameleons rely on the temperature around them to keep their body functioning properly. Without heat, they won’t move properly, making it very difficult to hunt food.

UVB lighting is essential to produce vitamin D3 and reduce the risk of metabolic bone disease.

In addition to this, you want to provide a bright enclosure during the day, creating a 12 day and night cycle, so your reptile knows when it’s time to sleep.

They enjoy an ambient temperature of 75ºF to 78ºF (24-26ºC). Their basking area should be more than thirty degrees Celsius (86ºF). Place your basking brand approximately twelve inches below the basking lamp.

These chameleons also require you to set up a 12 day and night cycle.

You can use a timer switch to ensure that the lights go on and off at the correct times, even when you are not at home or away for the weekend.

Both of these popular chameleons require lighting, heating, and UVB lighting. You want to ensure that you keep the temperatures at optimum to ensure the best health for your reptile pet. Using a digital thermometer can make it easy to monitor temperatures at a glance.

Veiled chameleons are relatively hardy reptiles, though they are prone to respiratory and stress-related illnesses.

They are also at a high risk of calcium and Vitamin A deficiencies when they don’t receive a well-balanced and high-quality diet.

They are also at a high risk of metabolic bone disease when they don’t receive sufficient UVB, which they would normally get from the sun in the wild.

Panther chameleons are hardy animals, but they do experience some health issues now and then.

The most common is liver problems and metabolic bone disease. Both can be prevented with the right care.

A lack of UVB can result in metabolic bone disease, as your chameleon is lacking the necessary calcium for development.

Liver disease is diet related. Ensure they have a high-quality diet with fatty snacks kept to a minimum. They must be supplied with plenty of hydration.

As with any reptiles, the panther and veiled chameleons are prone to illnesses, which can be prevented by keeping their enclosure at optimum, providing a clean enclosure and a healthy high-quality diet.

Veiled chameleons are one of the most popular chameleons to keep as a pet and are ideal for beginner enthusiasts. They are hardy and can handle some minor mistakes, often made by new reptile owners.

Panther chameleons are also a very popular choice for first-time chameleon owners. They are easy to look after, hearty eaters, and hardy. Their needs can be met with ease by purchasing equipment online or in most pet stores.

The veiled chameleon and panther chameleon are both ideally suited for beginner chameleon owners. Being hardy they can deal with some mistakes along the way as the new owner learns how to care for their new pet with confidence.

Until recently it wasn’t easy to find a captive bred veiled chameleon, but due to their popularity, they are readily available, and being captive bred they are more adapted to humans.

These chameleons can be found at reputable breeders and local reptile pet shops, shows, and on the internet. They are readily available and not difficult to find.

Both of these chameleons can be found with ease just about anywhere in the world as pets. Panther chameleons are a bit more expensive than veiled chameleons.

Overall, there isn’t much difference between these two chameleons except that the panther chameleon has proven to be brighter in color from a younger age than the veiled chameleon.

If you want a chameleon that will be bright from when you first bring it home, then the panther is for you.

In addition to this, the panther chameleon tends to be slightly friendlier than the veiled chameleon. Though both can get used to human handling with patience and consistence.

They are both recommended as beginner pets for the chameleon enthusiast.