Veiled chameleons are very popular reptilian pets that offer great coloration and are fun to watch.

There is a difference between males and females and if you are in the process of buying a veiled chameleon or you want to introduce another and need to identify the gender of your chameleon.

Continue reading to get more detailed information to help you sex your reptilian pet with confidence.

Why Should You Know The Sex Of Your Veiled Chameleon

There are numerous reasons why veiled chameleon owners want to sex their reptile pets, these include:

The good news is that it isn't very difficult to sex your veiled chameleon as the males are born with spurs on their hind legs.

The spurs can be found between the two parts on the toes and face backward. They are little bumps that assist the male in stabilizing when mating. Females’ feet look the same without any spurs.

By around five months your chameleon is older and will be easier to sex.

Males will already be larger than the female and will have a larger casque, which is the crest on the head. Males will start showing stronger coloration, along with aggressive colors.

Bear in mind that even though you can sex your chameleon at five months, they are not fully mature and you should wait until the female is at least one year of age before breeding.

Simple Ways To Identify The Gender 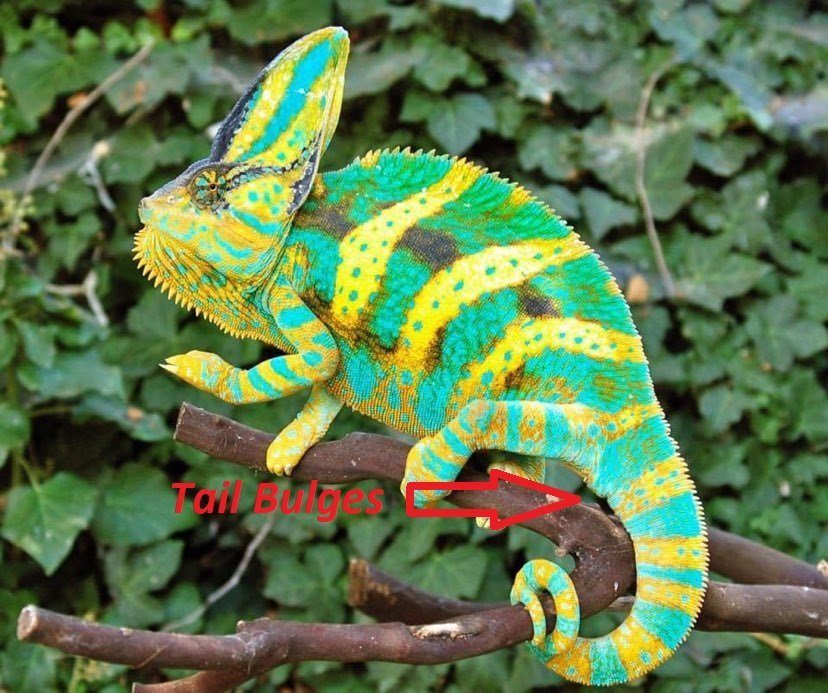 This is easier to identify in older males and younger reptiles may not have obvious bulges. Females have a smooth base to their tails. 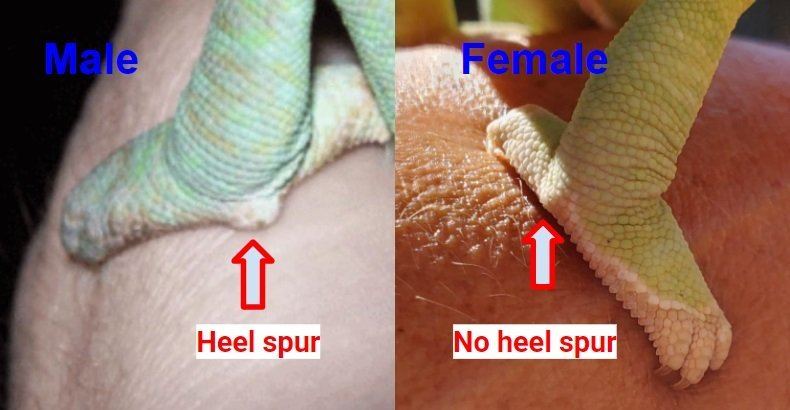 Spurs on the back feet of male and female chameleons

Males have tarsal spurs which can be seen from birth. These are on the back leg and found in male veiled chameleons.

Note that some females also have spurs which is why you need to look at other indicators to identify your veiled chameleon's gender.

Male veiled chameleons will develop casques, which are a crown on the top of the head. Even though the casque is present in both sexes, it is larger in males.

Colors and casques in male and female veiled chameleons

Another easy way to tell the male and female veiled chameleon apart is coloration. Chameleons make interesting pets as they change color, making them fun and interesting to watch. Coloration plays a big role in their communication with other chameleons.

Males tend to be slightly more colorful, brightener with more brilliant colors. They usually have vertical bars on their bodies with gold lines separating them.

Females have some colors, they are less inclined to change colors except when they are pregnant. When pregnant, the female will display a unique contrasting pattern, which puts males off when they want to breed.

You can use size to identify if your veiled chameleon is male or female. Males are larger than females.

Males are able to grow up to 24 inches as fully grown adults with the average size being up to 18 inches, while a female will only grow up to 12 inches in length once mature.

Therefore, the male can be double the size of a female.

One of the easiest ways to identify the sex of your veiled chameleon is how it acts towards other chameleons.

Males will be aggressive and territorial towards other males. This will result in a very flamboyant coloration with aggressive postures.

Females won't act the same towards other females. They adopt receptive or non-receptive colors when males are present, based on their particular reproductive state.

Whether you have recently brought a new veiled chameleon home or you are interested in breeding your chameleon, knowing the sex can be very beneficial.

Taking into consideration that males can be more aggressive and larger than females, means that if you want to house two chameleons, you are better off with females.

Take your time to get to know the behaviors, sizes, and differences between a male and female veiled chameleon to assist you in making your selection with confidence.