There are 14 lizards that you can come across in Louisiana. If you're wondering what lizards you can expect to see when in Louisiana or you're curious as to the lizard your pet just dropped at your feet, then continue reading to find out more.

Are There Poisonous Lizards In Louisiana?

None of the local Louisiana lizards are poisonous, with the exception of the broad-headed skin, which releases a toxin if your pet ingests it.

It is very important to educate children on the fact that lizards can and will bite if they feel threatened and they carry disease, which means you must wash your hands if you handle any lizard to reduce the risk of spreading salmonella.

The fourteen lizards you may come across when in Louisiana, includes: 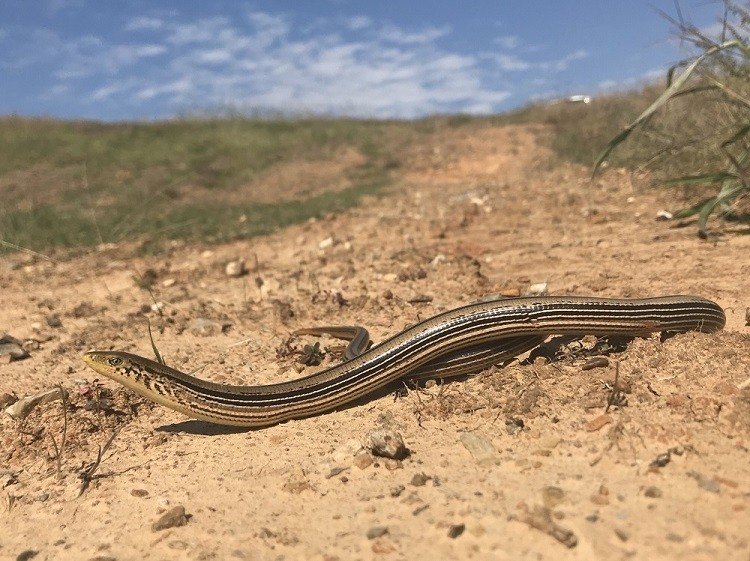 The slender glass lizard (Ophisaurus attenuatus) is a legless lizard with yellow or brown bodies with six stripes, along with a mid-dorsal stripe. They have white specs on their scales, which can form a stripe.

They have pointed noses.

These are fast-moving lizards and if captured, they will break a piece of their tail to distract their predators as they escape.

They can be found in burrows that have been made by other animals, often using the burrows for hibernation.

They are very active during the day.

When they break their tails, the part will grow back, but it will be shorter with each break.

They will very seldom bite, even when threatened, and may even stay still to blend in with the surrounding vegetation. 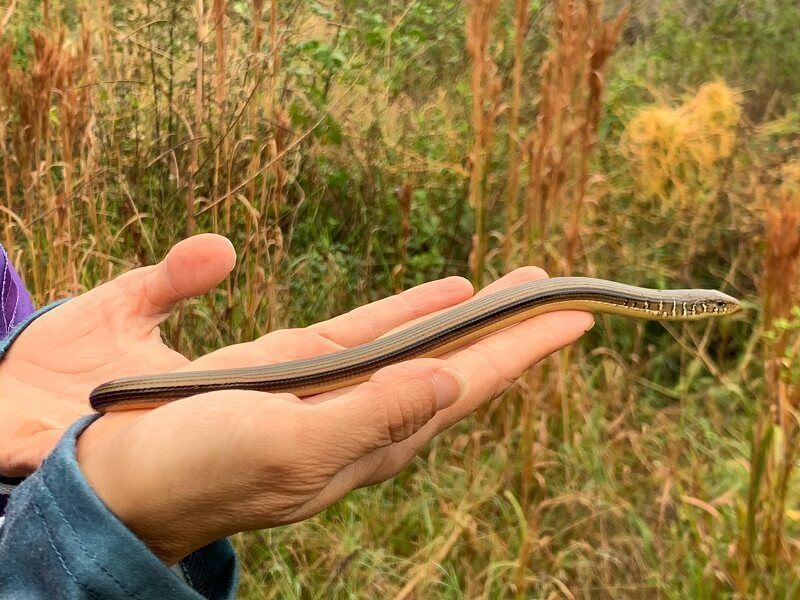 Eastern glass lizards (Ophisaurus ventralis) can grow up to 43 inches (108cm) with their tail making up the majority of their total length.

They do not have a mid-dorsal stripe, but they do have some irregular white markings on their necks and on the posterior corners of the scales.

As they age they develop a pattern of longitudinal dark lines. It's not uncommon for older lizards to have green coloration on the top and yellow on their belly. 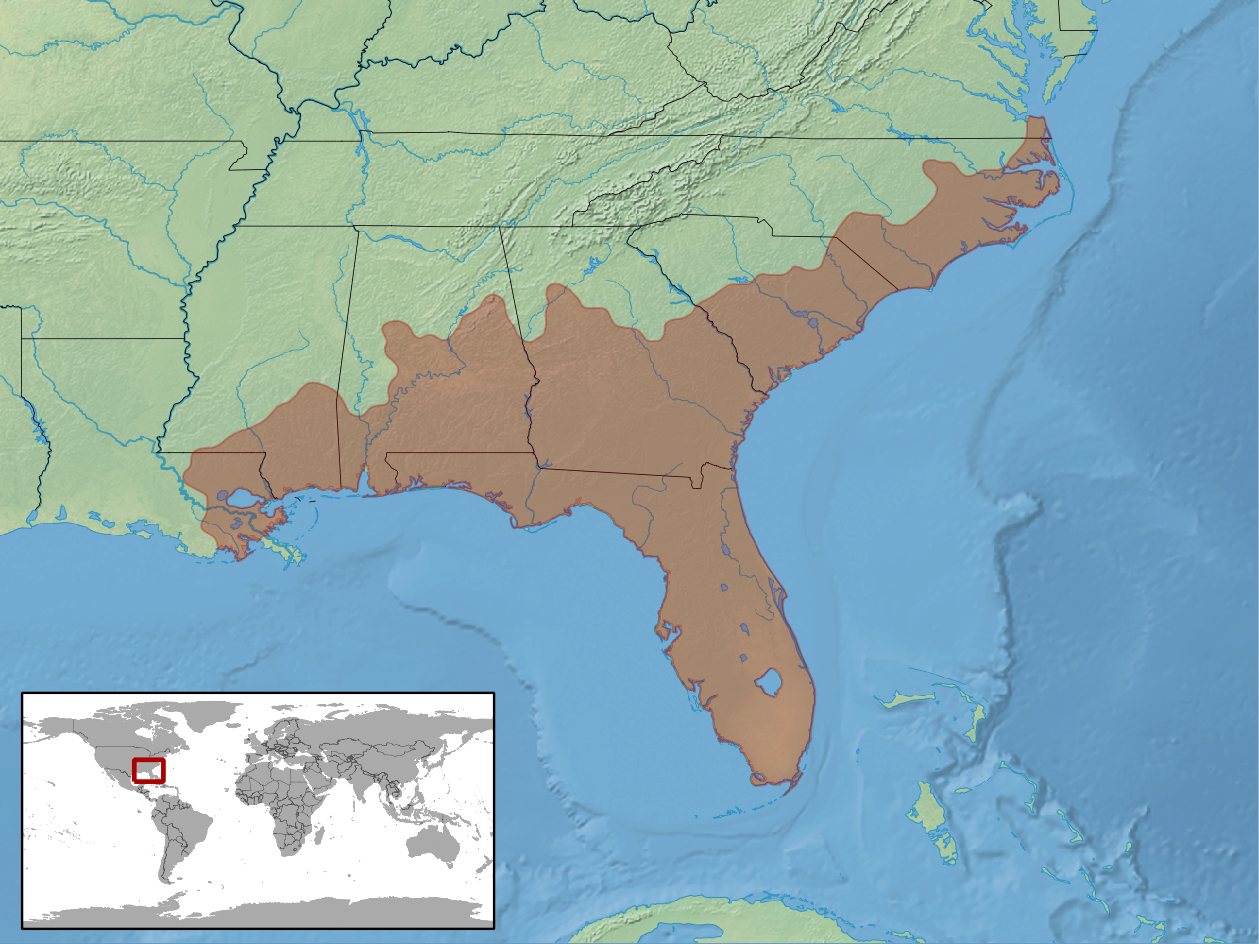 The Eastern glass lizards can be found throughout the United States including Louisiana, Oklahoma, Virginia, South Florida, Missouri, and more. 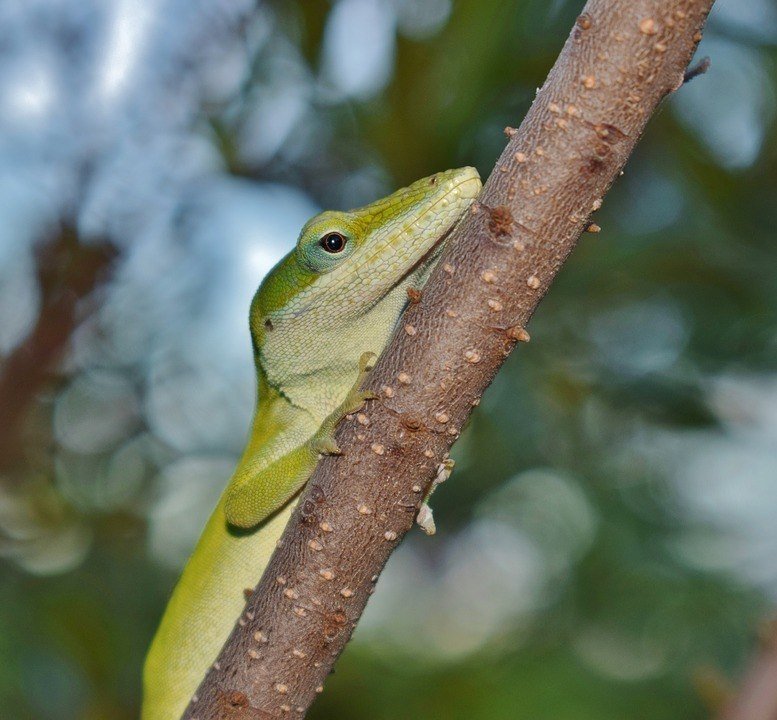 Green anoles (Anolis carolinensis) are smallish lizards that have very slender bodies and long heads with pointed ridges which can be seen between the eyes.

Males are larger than the female with a large bright red dewlap. Females have smaller dewlaps, which are lighter in color from pale pink to white.

An adult male anole can grow up to 8 inches in length, of which around seventy percent of the length is made up of tail.

They are native to North American and are often found in trees or on the ground, hiding among the shrubs.

Green anoles are also common in urban areas and can be seen basking on fences and steps. They prefer a forest habitat with plenty of brush clearings. 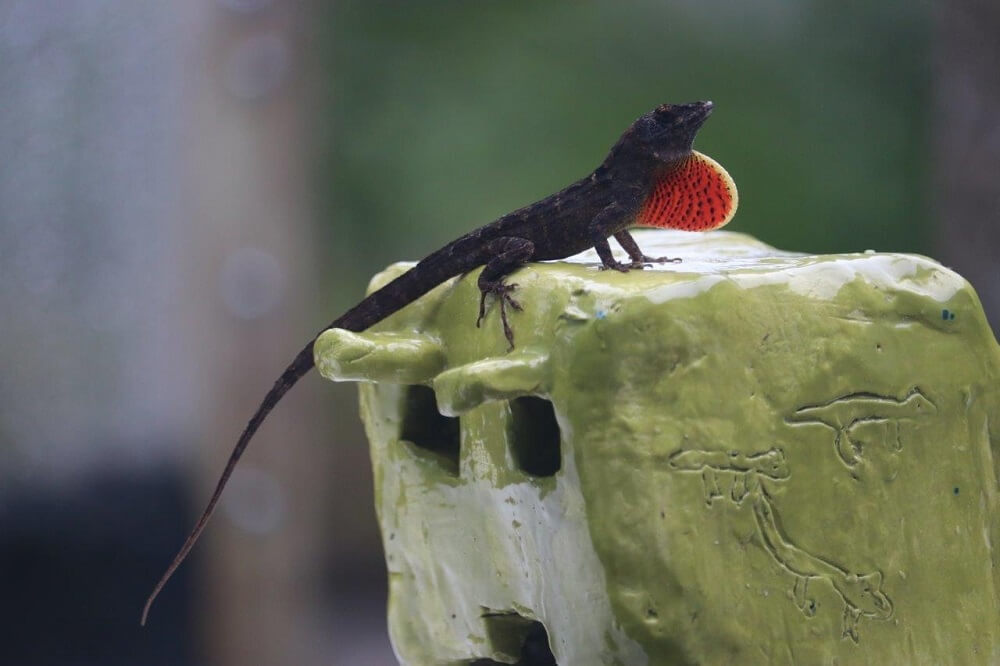 Image by lascuola via iNaturalist

Brown anoles (Anolis sagrei) are light brown with dark brown and black markings on their backs, along with tan to light colored lines on their sides.

Their dewlaps range from orange-red to orange with males growing to around 9 inches (22.9cm).

They have a ridge on their tail which travels to the head.

Females can be identified by the brown strip that runs down the length of their backs, which isn't featured on the males. 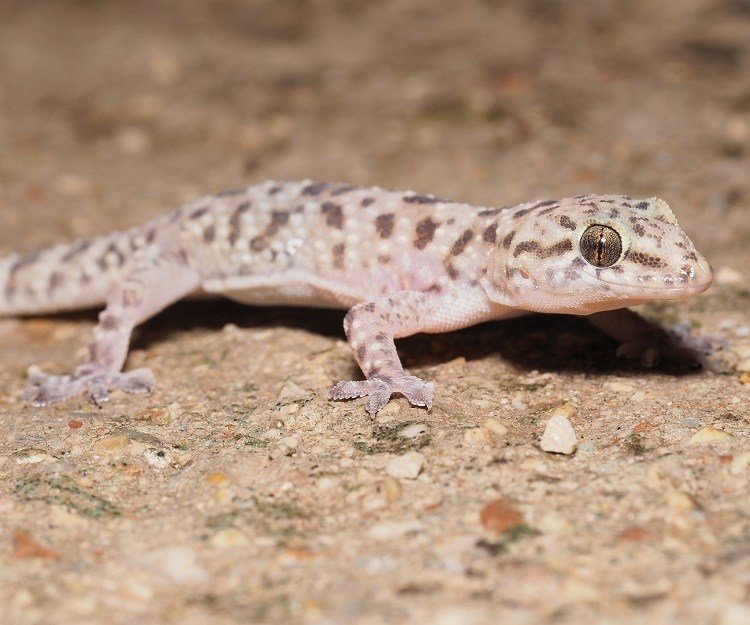 Mediterranean house geckos (Hemidactylus turcicus) are common in most parts of the world, including Louisiana.

They have rounded noses with moderate body ad limbs. Their bodies look like they are covered in tiny granules. They are usually gray or light brown in color with a transparent belly.

They are nocturnal and will head into the darkness if they feel threatened.

They are seen on their own or in small groups. 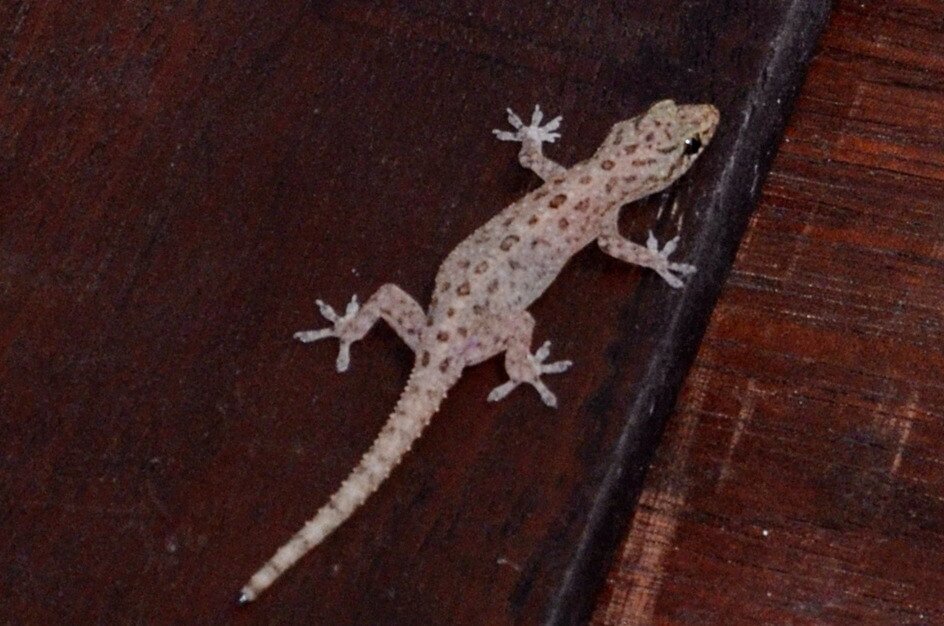 Image by martina via inaturalist

They have been introduced throughout the world including Bangkok, Australia, and Louisiana, where they are common near Jefferson Parish. 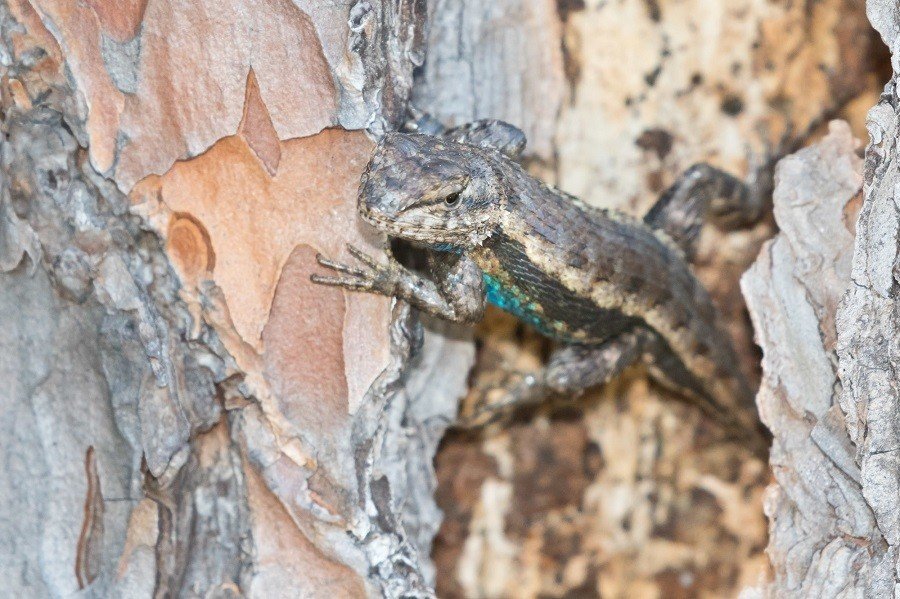 The prairie lizard (Sceloporus undulatus), also known as the Eastern fence lizard is a medium-sized lizard found in forests, rock piles, and stumps and logs.

These lizards can grow up to 7.5 inches (19cm) in total length, including the tail.

Their coloration is gray or brown with a dark line that runs down near the back of the thigh. Females are gray with dark lines on the back, white bellies with black flecks, and pale blue on the belly and throat.

Males, on the other hand, are brown in summer and green/blue to black on their sides and throat. 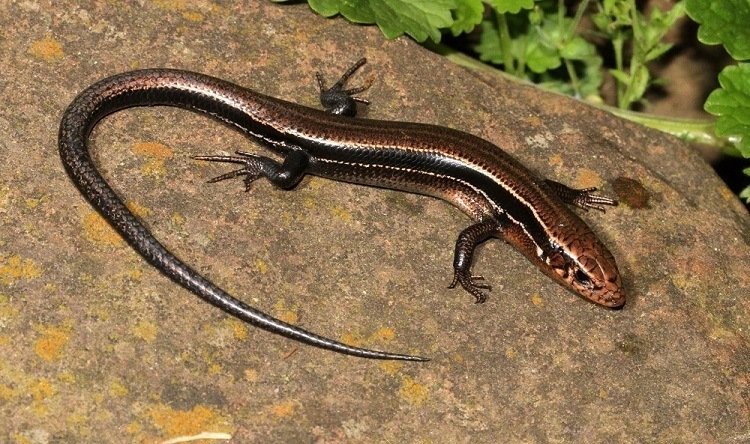 They have light stripes that go onto the tail with broad dark lateral stripes which are around four scales in width.

Males have red coloration on the side of their heads during the breeding season.

They prefer humid regions with wooded areas and loads of leaf litter.

They can swim and will hide in the water, under a stone if chased. 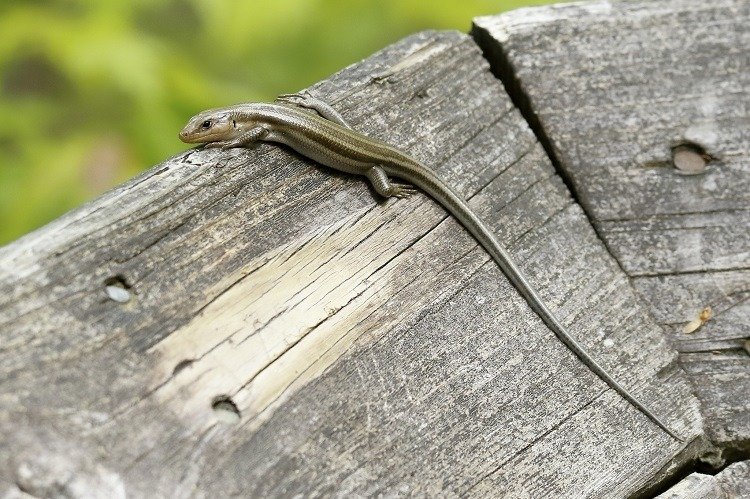 The common five-lined skink (Plestiodon fasciatus) is a small lizard growing up to 8.5 inches (21.5cm) in total length, this includes the tail.

Young lizards are brown or black with five yellow to white stripes and a bright blue tail. The tail color fades as the common five-lined skink ages.

The common fiv-lined skink lives on the ground and prefers wooden habitats that are moist with ample cover. They can often be found in rocky areas. 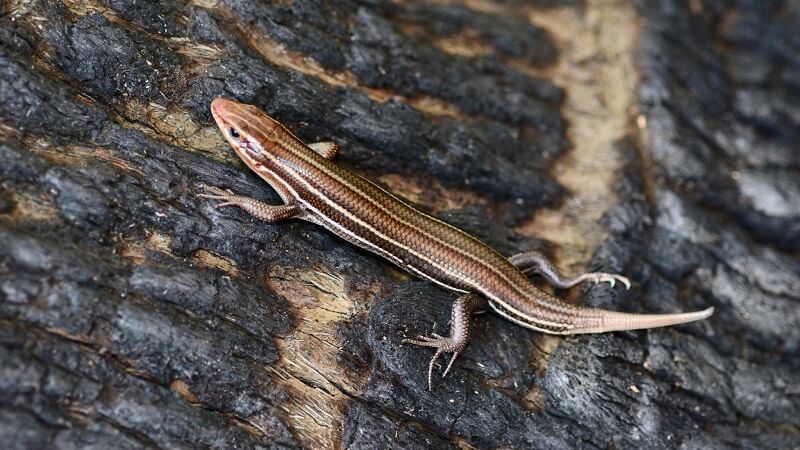 The Southeastern five-lined skink (Plestiodon Inexpectatus) has five narrow lines that run down their bodies, fading with age. The middle stripe is narrower than the others. They have distinct brown areas between the stripes.

When they are young, they have bright blue tails, which fade as they get older. The stripes become more red to orange as they get closer to the head. 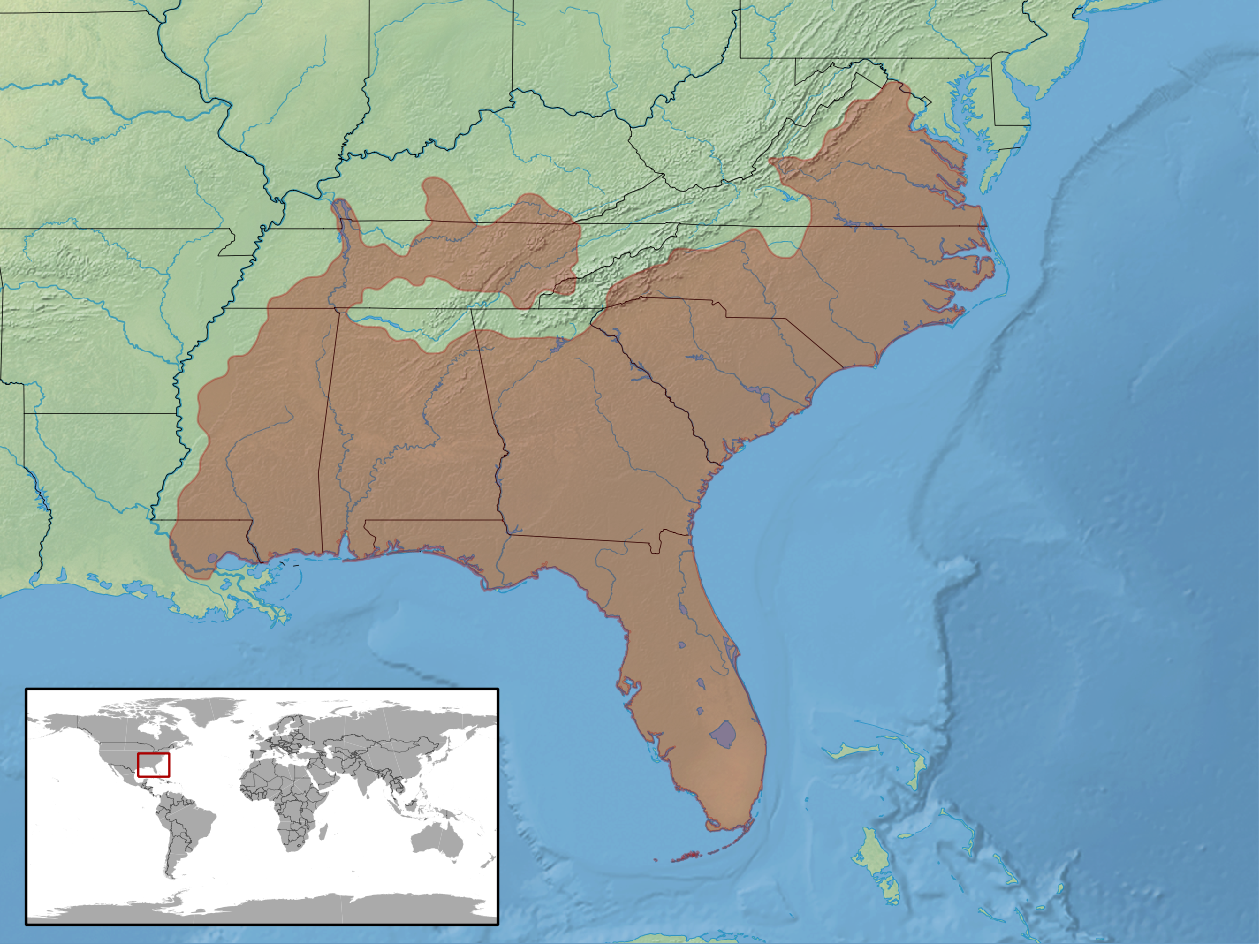 These skinks can be found throughout the southeastern United States, often found near freshwater with ample vegetation. 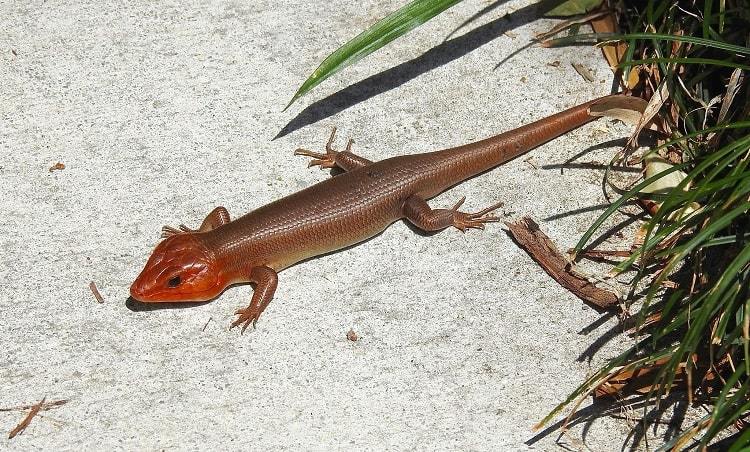 The broad-headed skink (Plestiodon Laticeps) is one of the largest skinks in the United States growing up to 13 inches (33cm) in total length.

These lizards get their names from their triangular-shaped heads and wide jaws.

Adults are olive-brown to brown in color with orange heads, which are displayed during the breeding season.

Females have five light stripes down the back, while juveniles have bright blue tails, which fade with age.

These skinks prefer humid forest areas with plenty of leaf litter, though they can be found in urban areas.

They are the skink that will spend most of their time in trees, where they sleep, find shelter, and hunt for food. 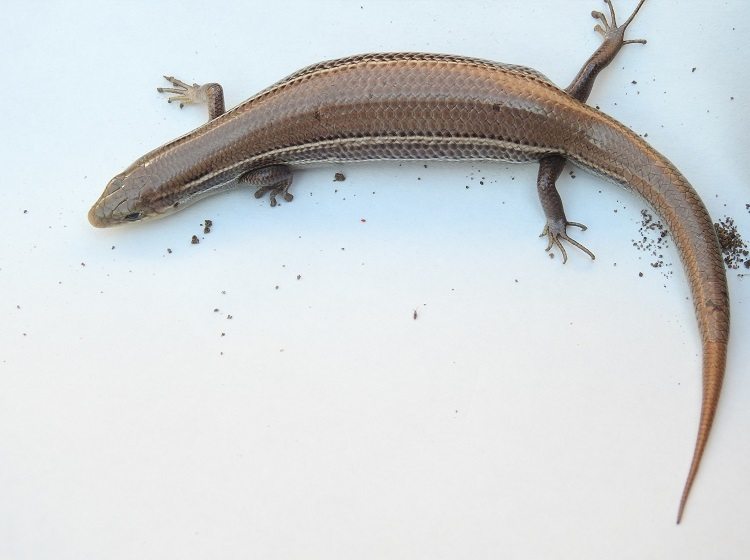 Image by Jacob via iNaturalist

Prairie skinks (Plestiodon septentrionalis) are small lizards that grow to 9 inches (22cm) in total body length, including their tails.

They are tan or brown in color with darker coloration on their sides with light stripes down the side of their backs.

Juveniles have bright blue tails, which fade with age.

These are excellent at burrowing and will hibernate in burrows.

They are secretive and are very seldom seen in the open. 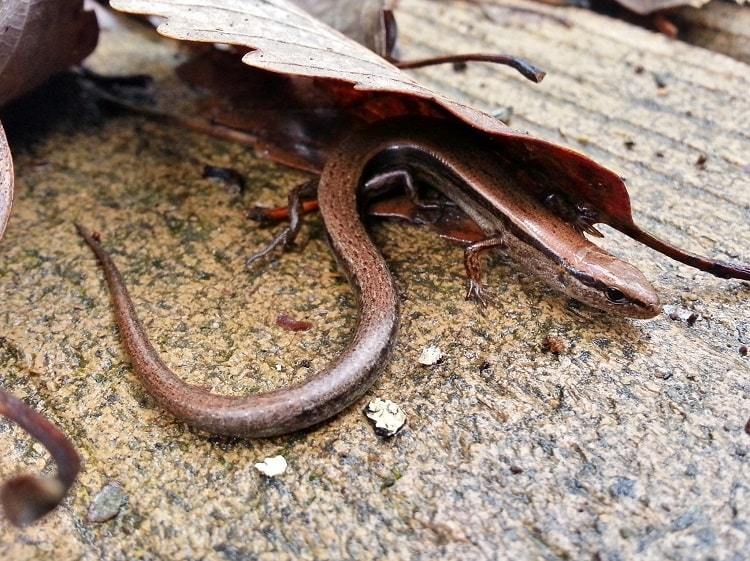 Image by Evan Spears via iNaturalist

The little brown skink (Scincella lateralis) is one of the smallest reptiles you will find in North America.

They grow up to 5.5 inches (14.5cm) in total length and are a brown to copper color with yellow or white bellies.

They have short legs with an elongated body. 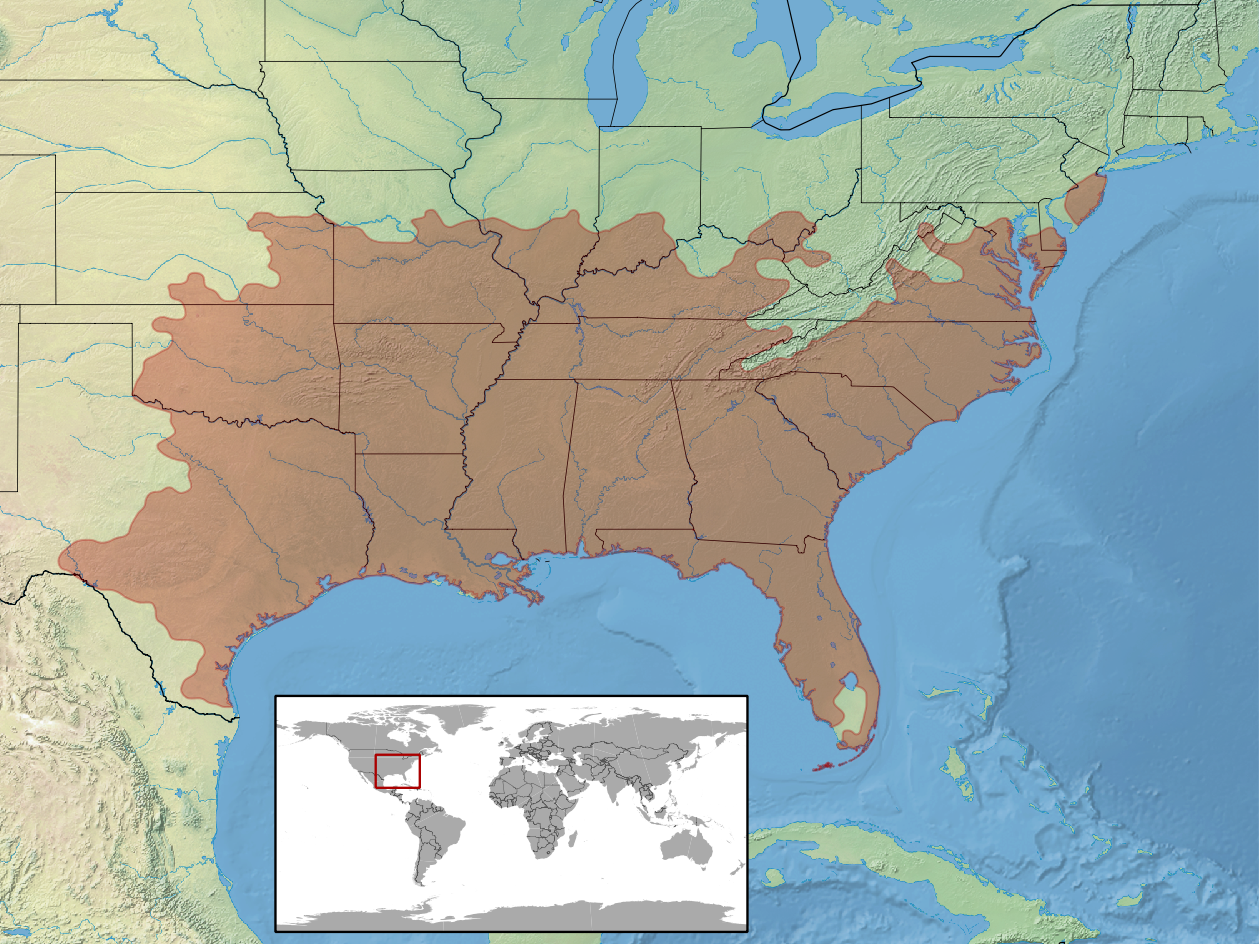 They can be found throughout the Eastern United States, where they make their habitat in forests, hedgerows, and on the edges of ponds and streams. 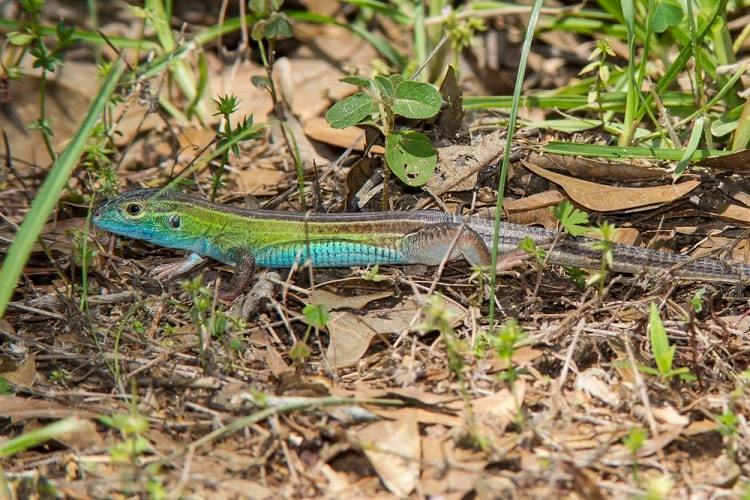 Six-lined racerunners (Aspidoscelis sexlineatus) can be black, brown, or dark green in color. They have six yellow or green-yellow stripes that run all the way down their body from their head right down to their tails.

Females tend to have a white belly, while males may have a pale blue belly. Males have a pale green throat.

These are slender-bodied lizards with their tails making up the majority of their total body length.

These lizards are insectivores and are very fast-moving, reaching speeds of 29 kilometers / 18 miles per hour. They can head to cover very quickly and are wary in nature.

The six-lined racerunner can be found in a wide variety of habitats, including woodlands, floodplains, rocky outcrops, and grasslands. They prefer lower elevations where there is dry soil.