Did you see a lizard with a blue tail and want to know what it is? There are a number of lizards with blue tails you may see in your yard or when you are out and about in the United States and Canada.

There are 16 different lizards with blue tails you may come across, these include:

These lizards may have striking blue tails that stay blue their entire lives, they may only have blue tails when they are juveniles or they may have a splash or dot of blue that makes them unique. 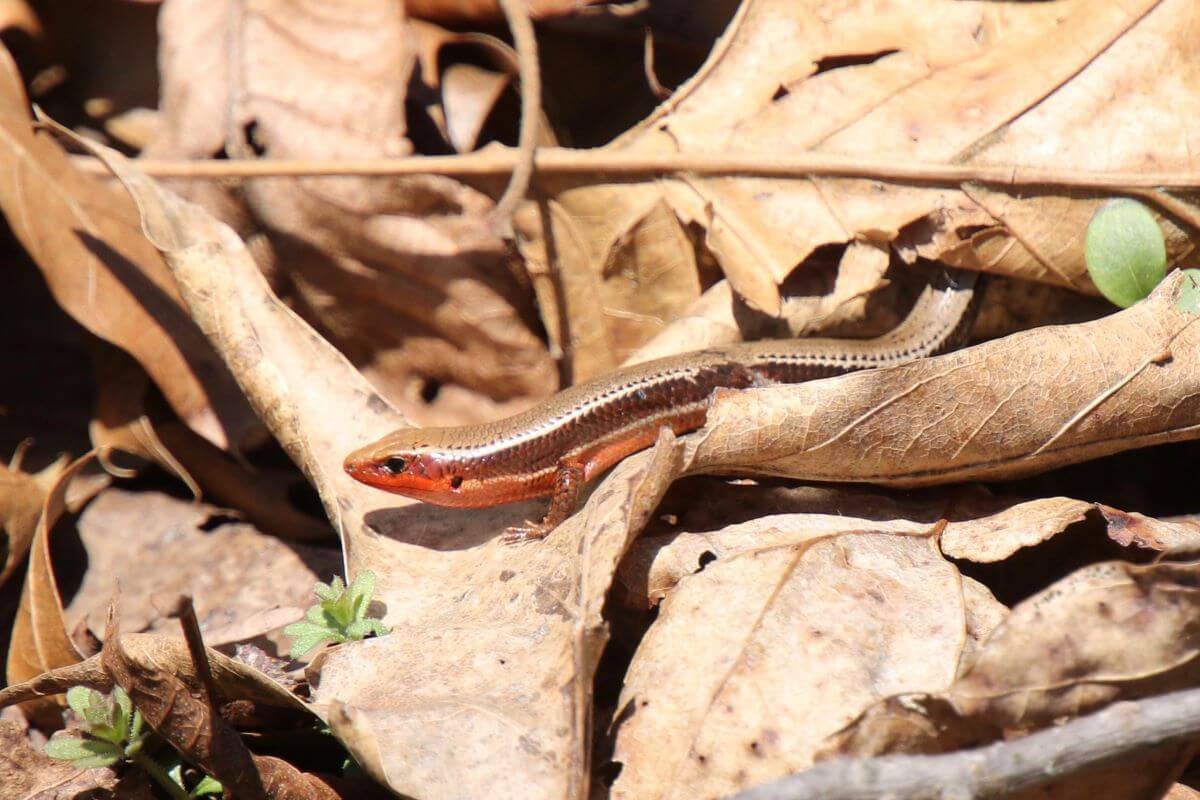 Image by er-birds via iNaturalist

The coal skink (Plestiodon anthracinus) comes from North America, growing up to 7.1 inches (18 centimeters). The coal skink has four distinct stripes that extend to the tail.

These skinks are identified by the large lateral stripe, which is approximately four scales in width with no light lines on the top of the head. There is a light strip on the edge of the third and fourth row of scales.

Males have reddish sides to their heads during mating season.

Juveniles tend to have blue tails and are often called “scorpions” as their blue tails are believed to be venomous, but this is completely false and while the skink can give quite a nip, it is not dangerous to humans. 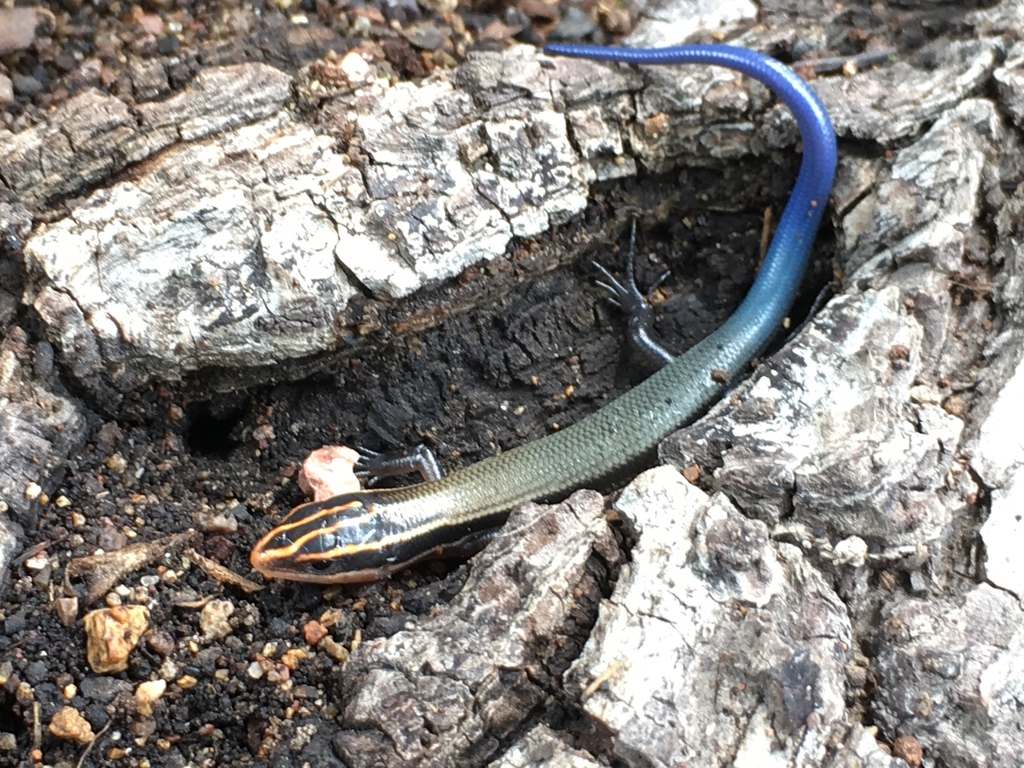 Image by Nathan via iNaturalist

The mountain skink (Plestiodon callicephalus) is a medium sized member of the Plestiodon skinks, which are native to North America.

These medium sized skinks can breach up to 3 inches or 7 centimeters with a brown body and black stripes down the side.

The head shows a distinct Y shape in a lighter colored pattern.

Juvenile Mountain Skinks have a strikingly blue tail, but unlike some of the other skink species, these do not lose the color as they age, it may fade but they hold onto the blue tail into adulthood. 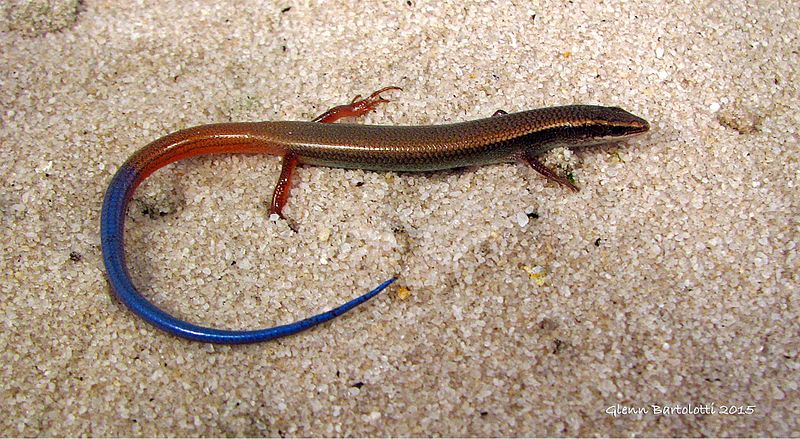 A juvenile mole skink lizard with its blue tail

The mole skink (Plestiodon egregius) is from the Southeastern United States and is a small sized lizard.

The mole skink lizard, or better known as the bluetail mole skink is a cylindrical lizard that is shiny and brown in color with juveniles boasting a bright blue tail, bearing in mind the tail takes up more than half the entire reptile’s length.

Tail regeneration is common with these skinks, but when tails regrow or when the skink ages, the tail tends to change from bright blue to a pinkish color. Males show a spectacular orange on their sides when it’s mating season.

These skinks tend to grow up to six inches or fifteen centimeters. 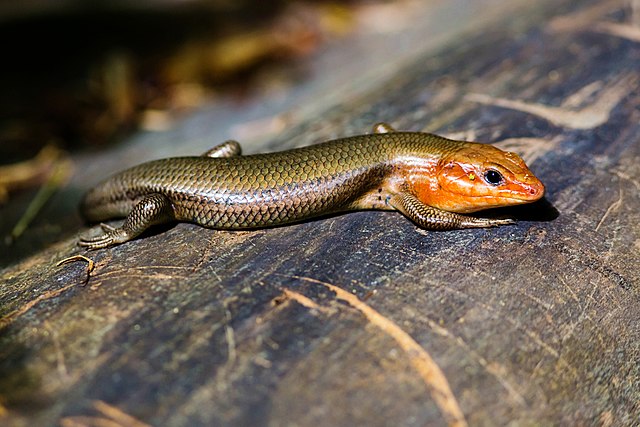 The broad-headed skink (Plestiodon laticeps) is native to the southeastern United States and is the largest of the Plestiodon skinks. This skink can grow up to 9 inches or 33 centimeters.

These skinks have a very wide jaw which gives their head a triangular look.

Males can be distinguished by the brown or orange coloration with bright orange heads during the mating seasons, while females have light stripes that run down the back and tail.

Juveniles are either black or drank brown with bright blue tails.

The prairie skink (Plestiodon septentrionalis) comes from the east of the Rocky Mountains and is one of seven lizard species found in Canada.

This is a small lizard that only grows up to nine inches or twenty centimeters.

Adults are brown or tan with darker coloration on the sides and thin light stripes along the sides at the back. Juveniles boast bright blue tails which fade as they age.

The western skink (Plestiodon skiltonianus) is a smooth scaled lizard with small limbs that grows up to eight inches or twenty centimeters. It is one of five lizard species found in Canada, spending their day soaking up the sun.

These skinks are easily be identified apart from the other species by their broad brown or black band that starts on the side of the head and goes all the way down the body to past the back legs.

Adults have a brown strip on their back which is edged with black and bordered with white on each side.

They have another pale stripe starting on the upper jaw and carrying on down the first broad dark band on the side of the head and extends into the tail.

Juveniles have bright blue tails that will fade and turn gray when they reach adulthood. Younger skinks have vivid colors when compared to adults. Image by David Barker via iNaturalist

The four-lined skink (Plestiodon tetragrammus) is from North America, a medium sized lizard, which is easily distinguished by their color and stripes.

The long line skink is light brown or gray with stripes that start from the eyes and go to past the forelegs, while short lined skinks are much darker in color with stripes ending before the forelegs.

Both species juveniles have bright blue tails that will fade as they age. As adults, they can grow up to seven inches or eighteen centimeters. 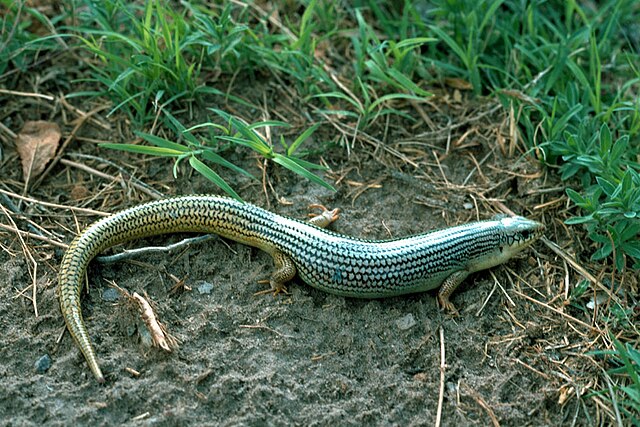 The great plains skink (Plestiodon obsoletus) is native to North America and is one of the largest skinks reaching up to 34 centimeters in total length.

This light gray to beige lizard has black and dark brown edged scales that run diagonally with a yellow belly.

Juveniles can be distinguished for their black and white spots on the lips and head along with their blue tails, which fade as they age.

These skinks are often found in the eastern foothills of the Rocky Mountains close to water.

A juvenile five-lined skink lizard with a blue tail

This five-lined skink (Plestiodon inexpectatus) is very common in the Southeastern United States and can be distinguished by their narrow stripes along the sides of their body, which lighten with age.

The middle stripe is narrower.

Young skinks have black between the stripes which become brown as they age.

Juveniles showcase a bright blue or purple tail, brighter closer to the tip. Stripes are bright red to orange on the head. In some cases, the juvenile coloration carries through into adulthood, leaving the head an orange/brown.

An African five-lined skink lizard with a birhgt blue tail

The African five-lined skink (Trachylepis quinquetaeniata) is an African species, often referred to as the rainbow skink. It is a medium sized lizard that grown up to approximately eight inches or twenty centimeters.

They have variable color, based on the gender and age of the skink. They have glossy scales with a base color of olive brown or dark brown.

White spots and three light olive or brown stripes are common that run from the head to the bright blue tail. The stripes often fade as the lizard ages.

These skinks have a very pointed snout with black spots behind the ear openings.

This lizard (Aspidoscelis uniparens) is an all-female species and is a small lizard grown up to just over five inches or just shy of fourteen centimeters.

These are long and thin lizards with a thin tail that is longer than their body. You can identify them by their brown or live body that fades as it goes down the body, ending in a blue or gray on the tail.

Juveniles have a bright blue tail that is vibrant but fades as they age.

These lizards can be found from Southern Arizona to New Mexico. They are often seen in grasslands and low valleys. 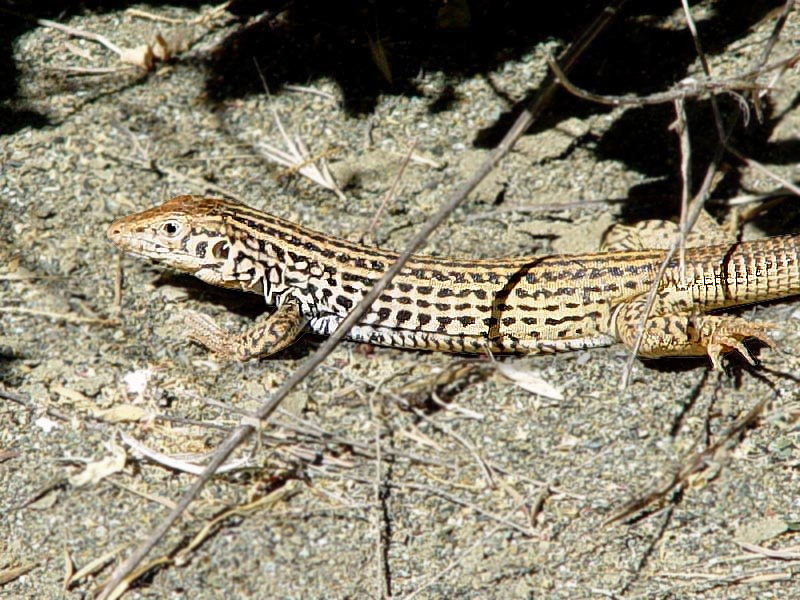 This lizard (Aspidoscelis marmoratus) can be found from Texas to Mexico. This whiptail grows up to twelve inches in length and is often gray or black with four to eight yellow or white stripes.

The dark mottling the lizard has is what gives it the marbled appearance. They have a yellow or white underside with peach-colored throat and long tails with a slender body. 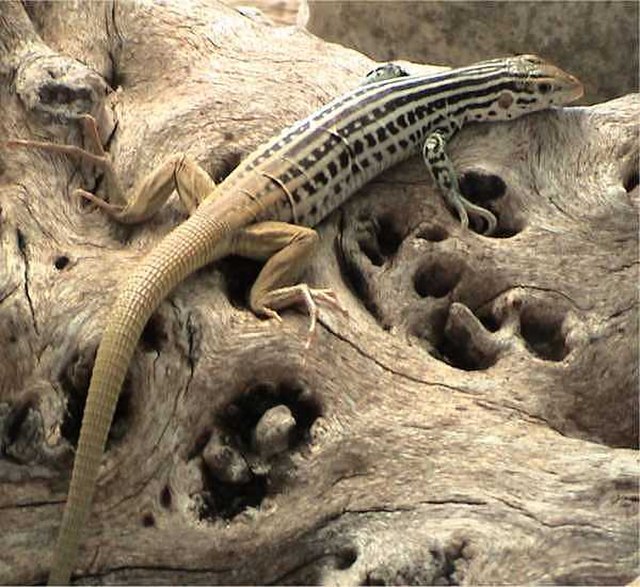 These lizards grow up to nine inches and are back with yellow or white stripes that run from the head to the tail.

You can identify these whiptails for their light blue belly and slender bodies with blue tails. The tail is three times the length of the body. The blue is more noticeable in males than females.

An orange-throated whiptail lizard with its blue tail

The orange-throated whiptail (Aspidoscelis hyperythrus) can be found in Southern California to Mexico. They have five or six light-colored stripes which are shown on a brown or black side. The middle stripe has forks at both ends.

Males have a distinct orange throat, which is not seen in females and juveniles. They have forked tongues and grow up to seven centimeters or just shy of three inches.

Juveniles have blue legs and tails, while males may include orange, gravid females also have orange coloration around the jaw. 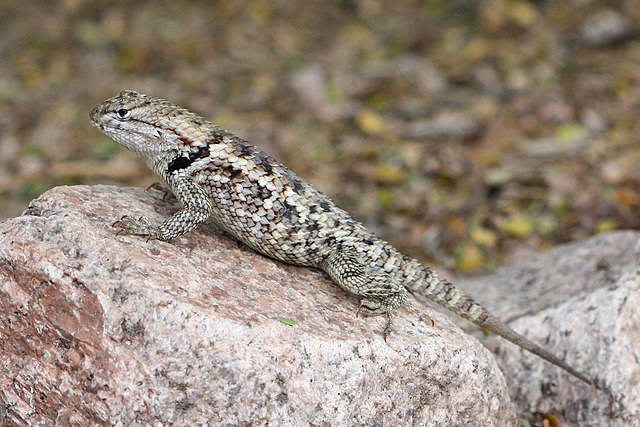 The desert spiny lizard (Sceloporus magister) can be found in the Sonoran Desert of North America, it is also common in Arizona, Texas, California, and New Mexico along with a number of Mexican states.

Males have distinct blue or violet patches on the belly and throat with blue tails and sides, while females and juveniles tend to have dark spots on their backs and no blue in their coloration.

All of these lizards have brown or yellow triangular spots which can be found on the shoulders. As adults, they can grow up to six inches. Their colors change to darker during winter and lighter in the summer.

The ashy gecko (Sphaerodactylus elegans) was introduced to the United States from the West Indies. The Cuban Ashy Gecko is the largest of all the North American dwarf geckos, growing up to seven centimeters.

These gray/brown geckos are lighter in the dark of night. Juveniles have bold black cross bands on their body and head which is set over a greenish gray with a red or blue colored tail.

Tail colors vary from red to blue or those with a green midsection.

These geckos are often spotted on walls or in trees, they are nocturnal, so they are active at night hunting small insects.