Lizard With Orange or Red Head

It's not uncommon to see a lizard in your yard and wonder what lizard it is. There are a number of lizards with orange or red heads throughout the United States and Canada. Identifying the lizard shouldn't be hard, whether its head is completely red, more orange, its entire body is red or the red is more of a pink. Continue reading to find the most common orange or red headed lizards. 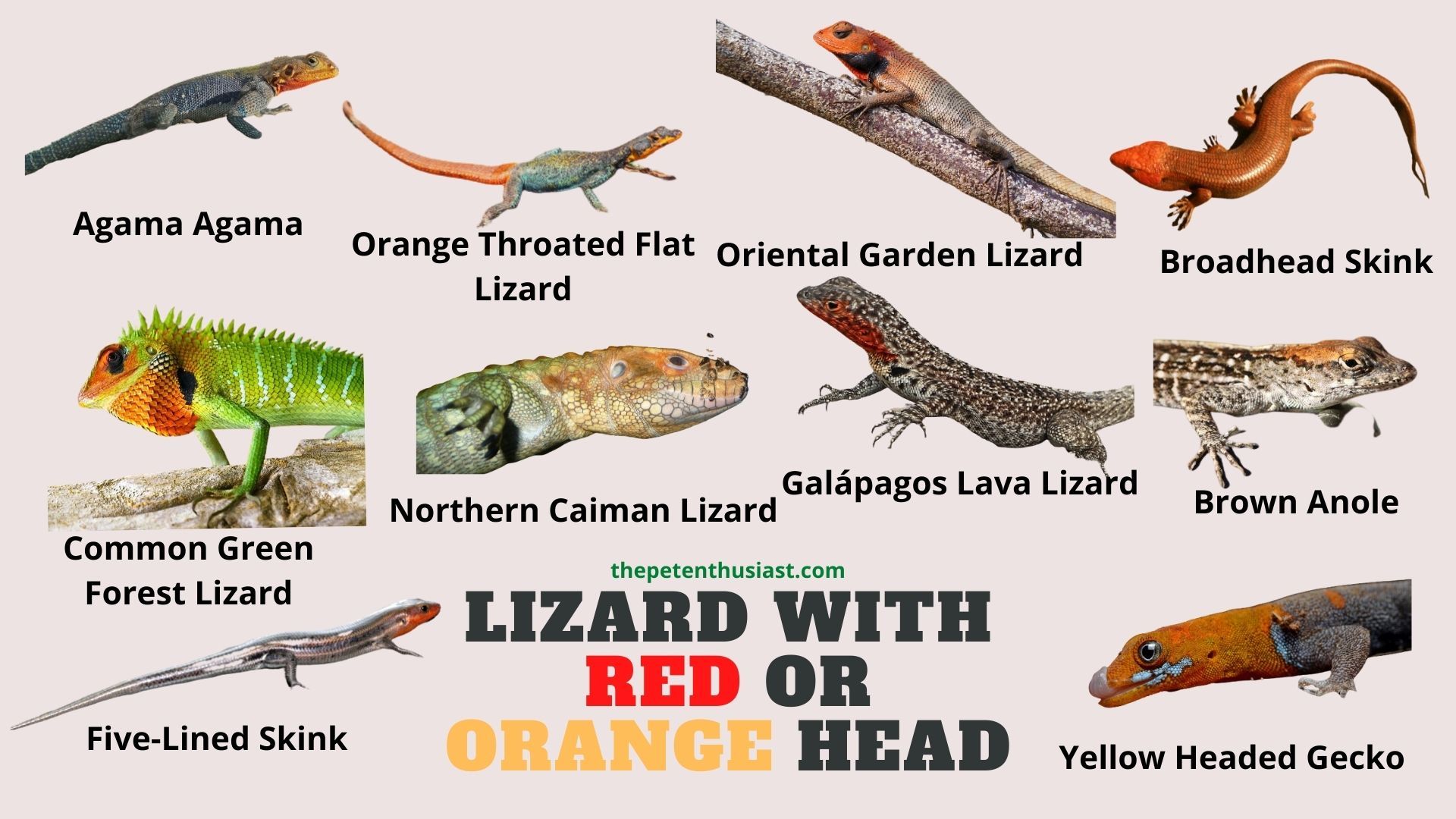 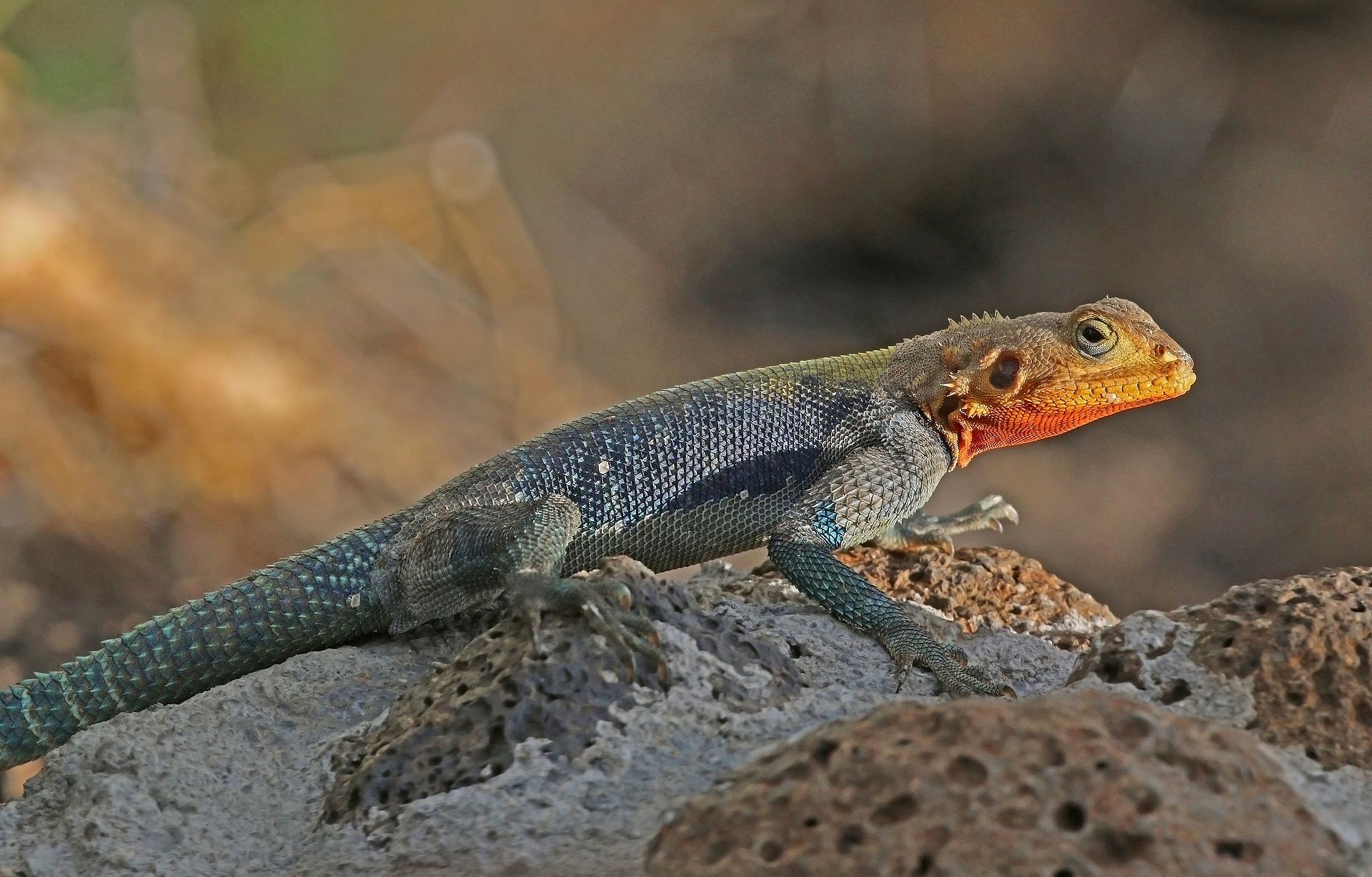 A rock agama lizard with a red head

There are a number of Agama Agama species, including the red headed rock agama, common agama, and the rainbow agama. These are found in sub-Saharan Africa. These lizards can grow up to 30 centimeters (12 inches) in length, with the male up to 12cm (5") longer than the female. You can identify the agama with its white underbelly, brown back limbs, and the stripe down the middle. The stripe on the tail has up to seven dark patches on the side. These lizards are active during the day eating a diet of mostly insects, though they do eat reptiles, vegetation, and small mammals.

The male agama is territorial and will fight with other males. They tend to live in social groups of females with one male. These lizards reach reproductive maturity at about two years, mating during the wetter seasons. Females lay clutches of up to seven eggs, which hatch within ten weeks. 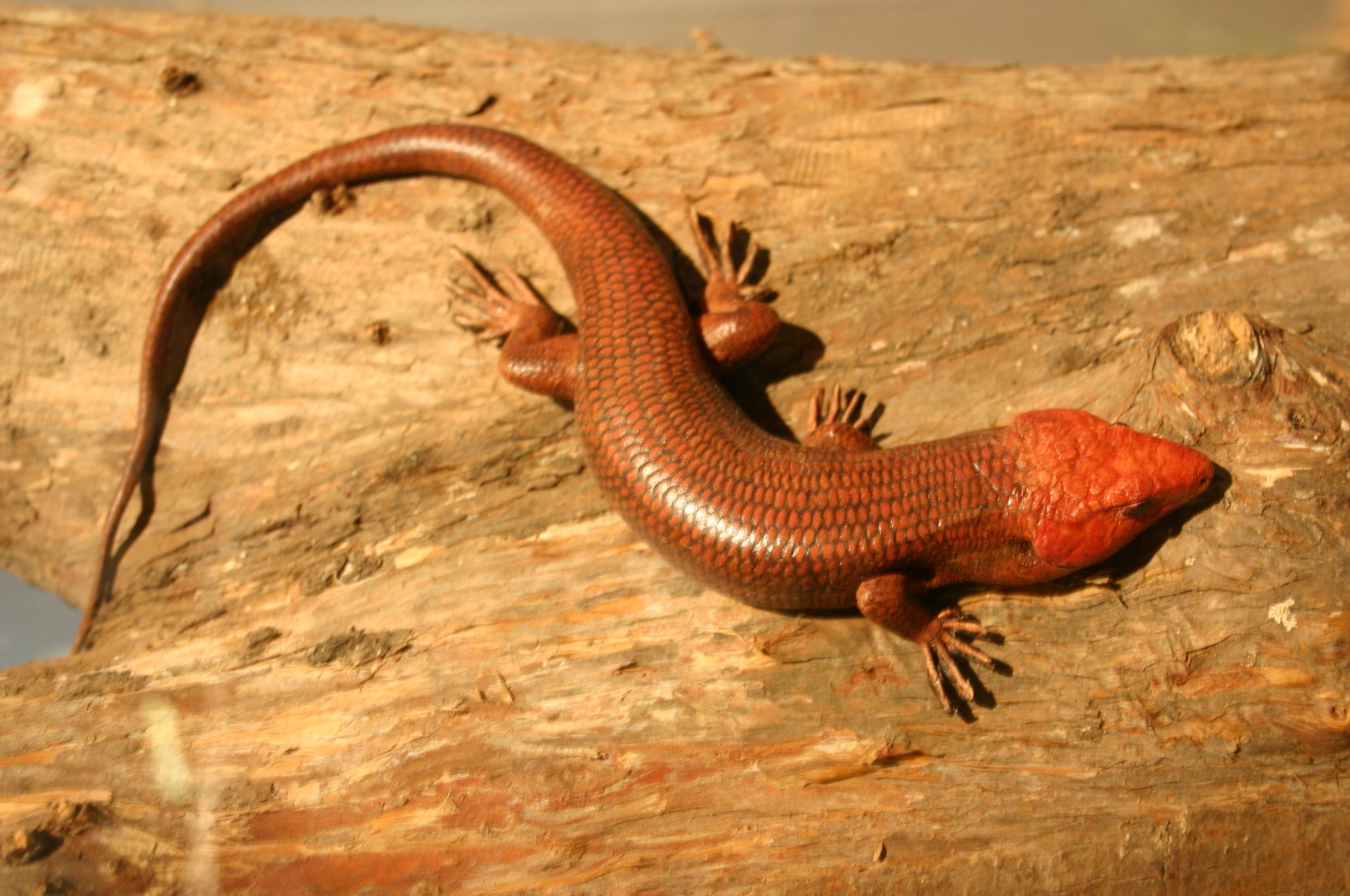 Broadhead skinks are lizards that come from the southeastern United States and is one of the largest skinks that can grow up to 33 centimeters (13 inches). These lizards get their name from their wide jaw and triangular head. The males have bright orange heads when it is mating season, which is springtime. They are olive or brown in color. Females have stripes than run down their tails, while juveniles stay dark brown, even black with blue tails.

The broadhead skink lives in humid forest areas where they forage on the ground. The male is larger than the female and they tend to choose the largest female to reproduce with. Females can lay up to 22 eggs, which she protects until they hatch. Due to their bright orange heads in mating season, these are believed to be venomous lizards, but they are completely harmless and non venomous, so don't worry if you see them in your yard. Often, it’s the size of these skinks that scare people, but you need to remember they are shy and are best left alone. 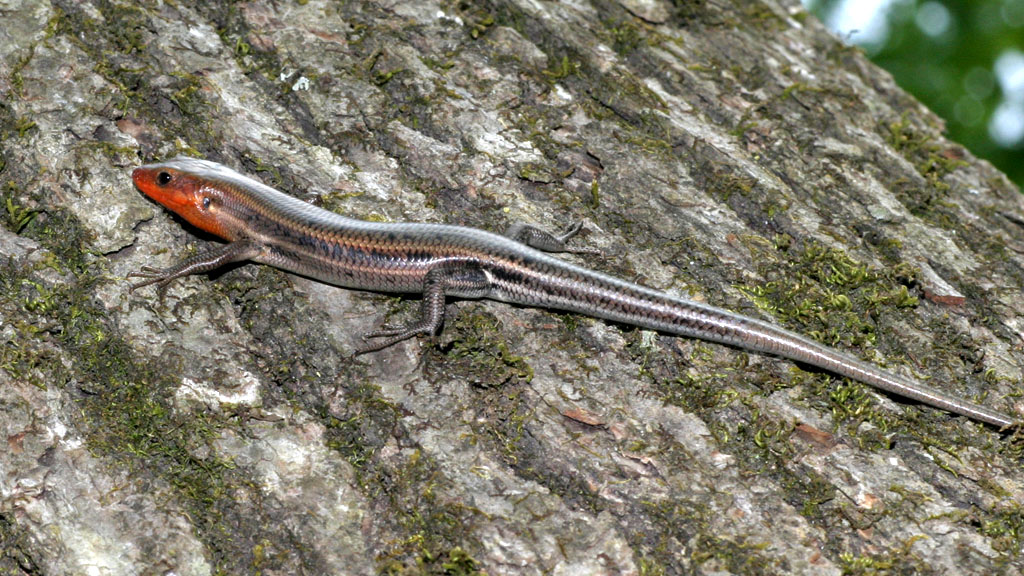 The five-lined skin is a Northern American lizard species and is a common lizard found in the US and Canada. The juveniles are often called blue tailed skinks, while the adults are referred to as red headed skinks. The five-linked skink is medium in size and can grow up to twenty one centimeters (8.5 inches) in length. Younger skinks are black or dark brown with five white to yellow stripes that run all the way down the body, complete with a bright blue tail. As they age the blue fades and the stripes start to vanish.

The five-lined skink is ground dwelling, preferring wooded habitats that are moist. Females lay their eggs between May and July with an incubation period of four to six weeks. Up to eighteen eggs are laid usually under a stump, rock, or in a decaying log. Females will protect the eggs for up to two days after hatching. Male five-linked skinks are aggressive against other males that come into their territory, though they do tolerate females and juveniles. These skinks will bite when threatened. They also disconnect their tails, which continue twitching, while they run for shelter from predators. They eat a varied diet of crickets, spiders, beetles, frogs, other lizards, and newborn mice. 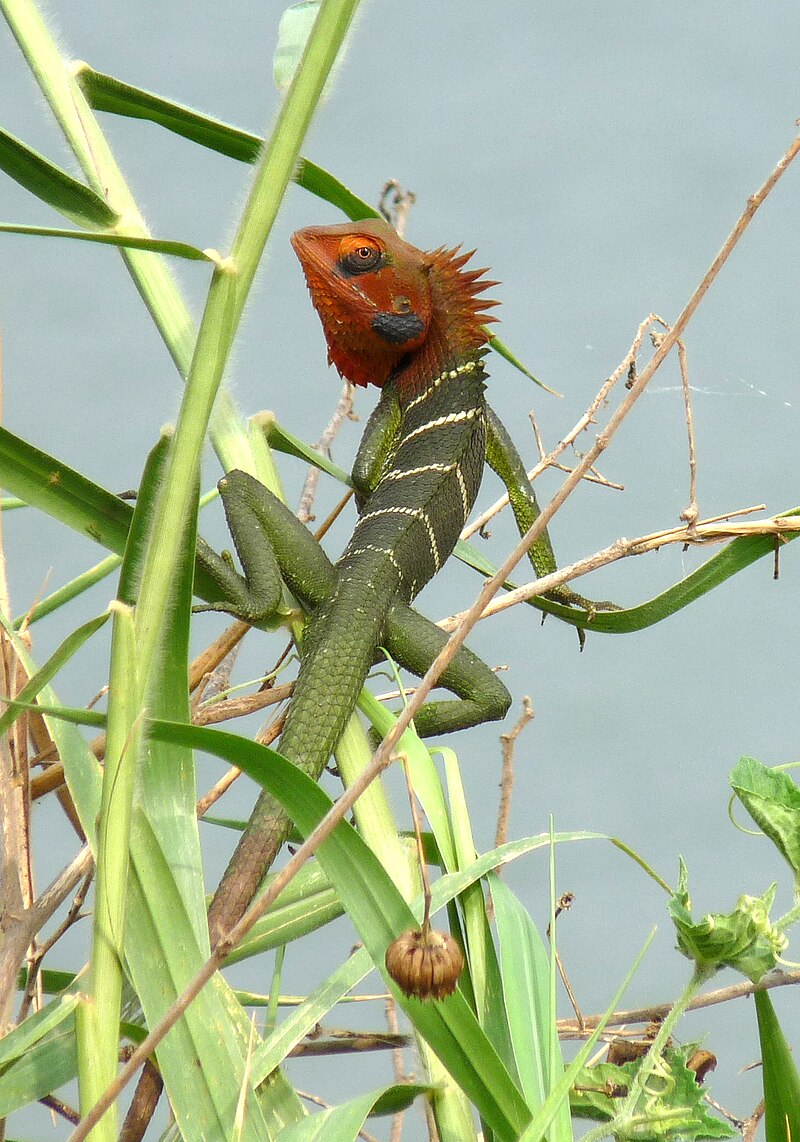 The common green forest lizard comes from India and Sri Lanka and is a large agamid species that measures up to 65 centimeters in length (25.5 inches). It can be easily identified by its large head, which is one and a half times the size of the width of the lizard. It has a concave forehead, smooth upper head scales, and swollen cheeks. They have a row of up to nine compressed spines, which are separated into two groups, located just above the tympanum. They have long and slender tails.

These lizards are bright green with white, dark green, or cream stripes, which usually continue all the way down the tail. The common green forest lizard has a grown to yellow head, which turns bright red during the breeding season. The tail is light brown. 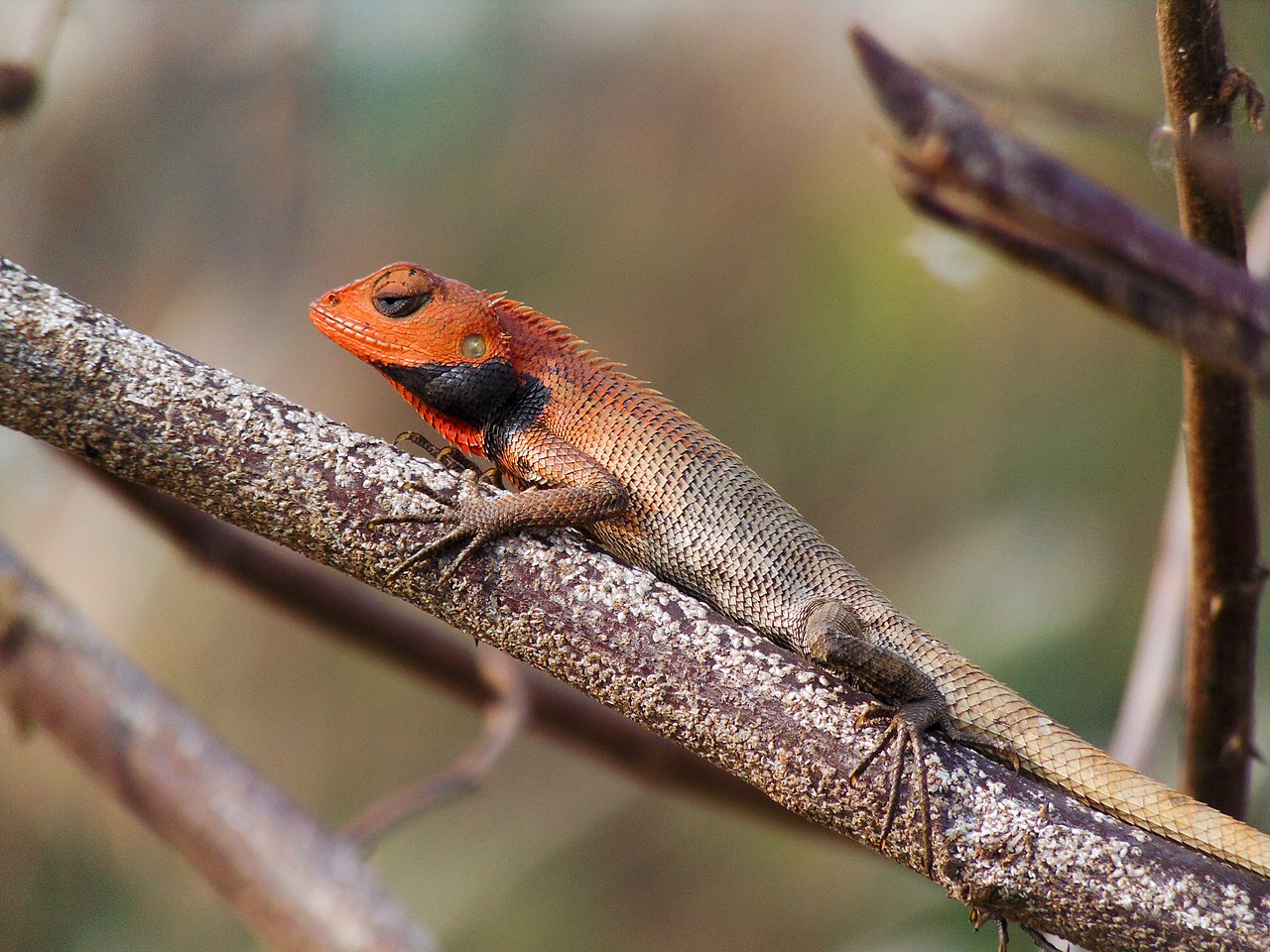 The oriental garden lizard comes from Indo-Malaya and is found throughout the world. These lizards have spiny backs with males developing a bright red throat during the breeding season. These are insectivores, eating a diet of insects. They are fairly large lizards measuring up to 37 centimeters, if you include the tail, or ten centimeters snout to vent.

They have variable coloration and you can find them in yellow, green-olive, and uniform brown. They have broad bands across the bank with a yellow lateral band. The black streaks that radiate from the eyes can continue down and over the throat. These lizards are light brown but can quickly change to bright red or a mixture of brown and red. The changing of colors is common for males during breeding seasons.

The males head and neck can turn anywhere from bright orange to bright red with a black throat during mating season. Their heads turn red when they defeat a rival in battle. They are very territorial during the breeding season and discourage males from entering their territory by bobbing their bright red heats. They inflate their throat in order to attract a female. Females lay up to twenty eggs, which they bury in moist soil. The eggs match within seven weeks and reach reproductive maturing by twelve months.

The Galapagos lava lizard is also referred to as the Albemarle lava lizard, which comes from the Galapagos Islands. Males tend to be larger than females, measuring up to 10cm from snout to vent. They tend to be heavier than the female. Females grow up to seven centimeters. Males are blue gray in color, sometimes brown with spots of ash gray and brown. They also have dark cross bands on the neck and back. The male also has spined scales than run down the full length of his body, longer than the females.

Females have some light specks and they don't have the dark crossbars that the male Galapagos lava lizards have. They also don't have the black throat, but a distinctive patch of orange, salmon, or bright red which extends from the eyes to the snout and down to the base of the front legs. 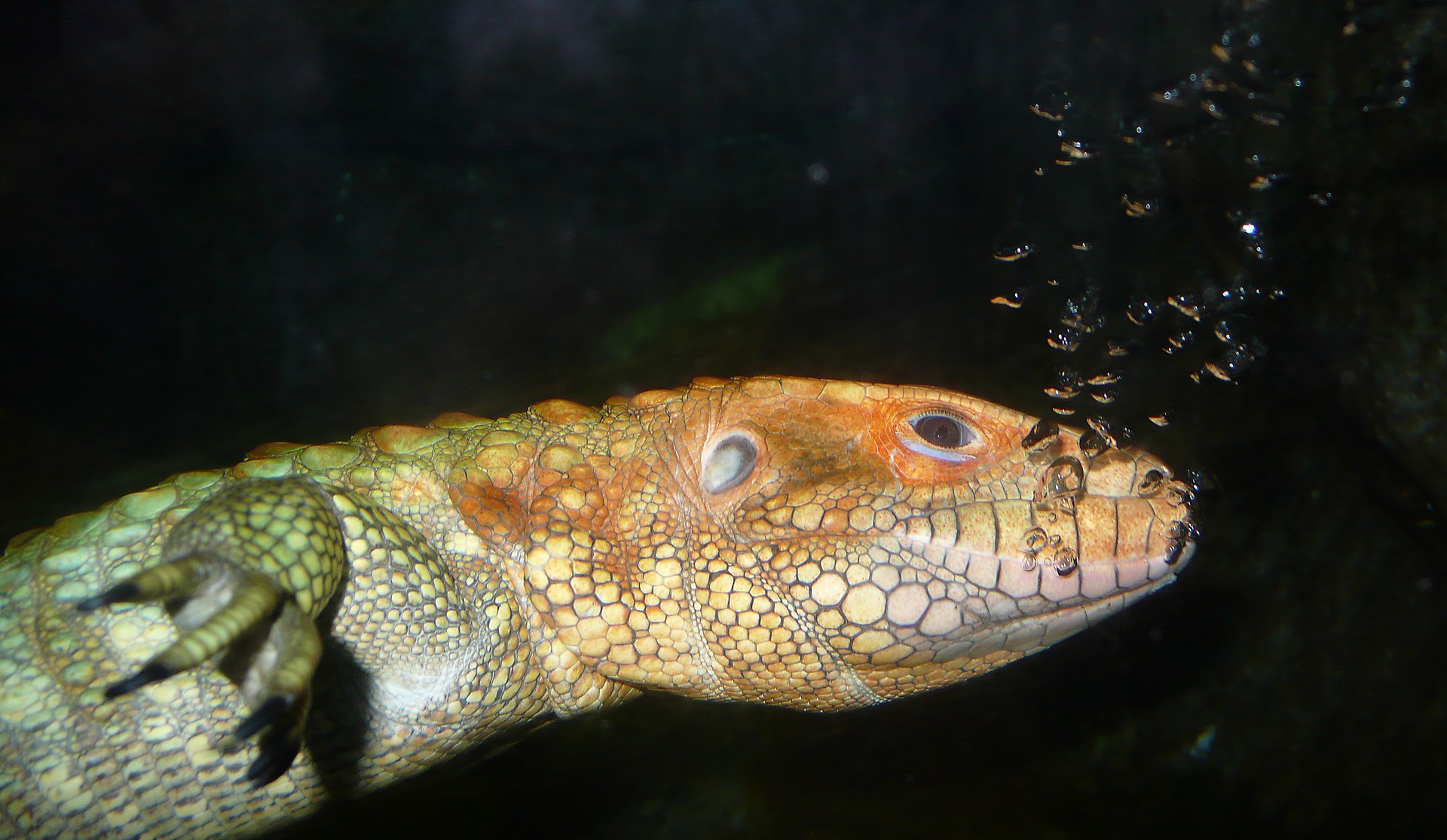 A northern caiman lizard in the water with its orange head

This lizard is found in Northern South America. It is a heavy set lizard with powerful short limbs and a bulky head which is red or orange in color. They have muscular jaws with a long flattened tail, which helps them adapt to a watery habitat, they are able to swim and dive with ease. Their body can be described as that of a crocodile in bright green with dark green banding, horned scales that are raised to protect against predators. These lizards can grow up to four feet in length and can weigh up to ten pounds.

These are found in Southern America in swamps and flooded wood areas. They are aquatic, but don't be fooled, they are excellent at climbing, so they can be found soaking u the sun on branches that overhang the water. These lizards eat a varied diet of fish, snails, clams, inverts, and freshwater inhabitants. 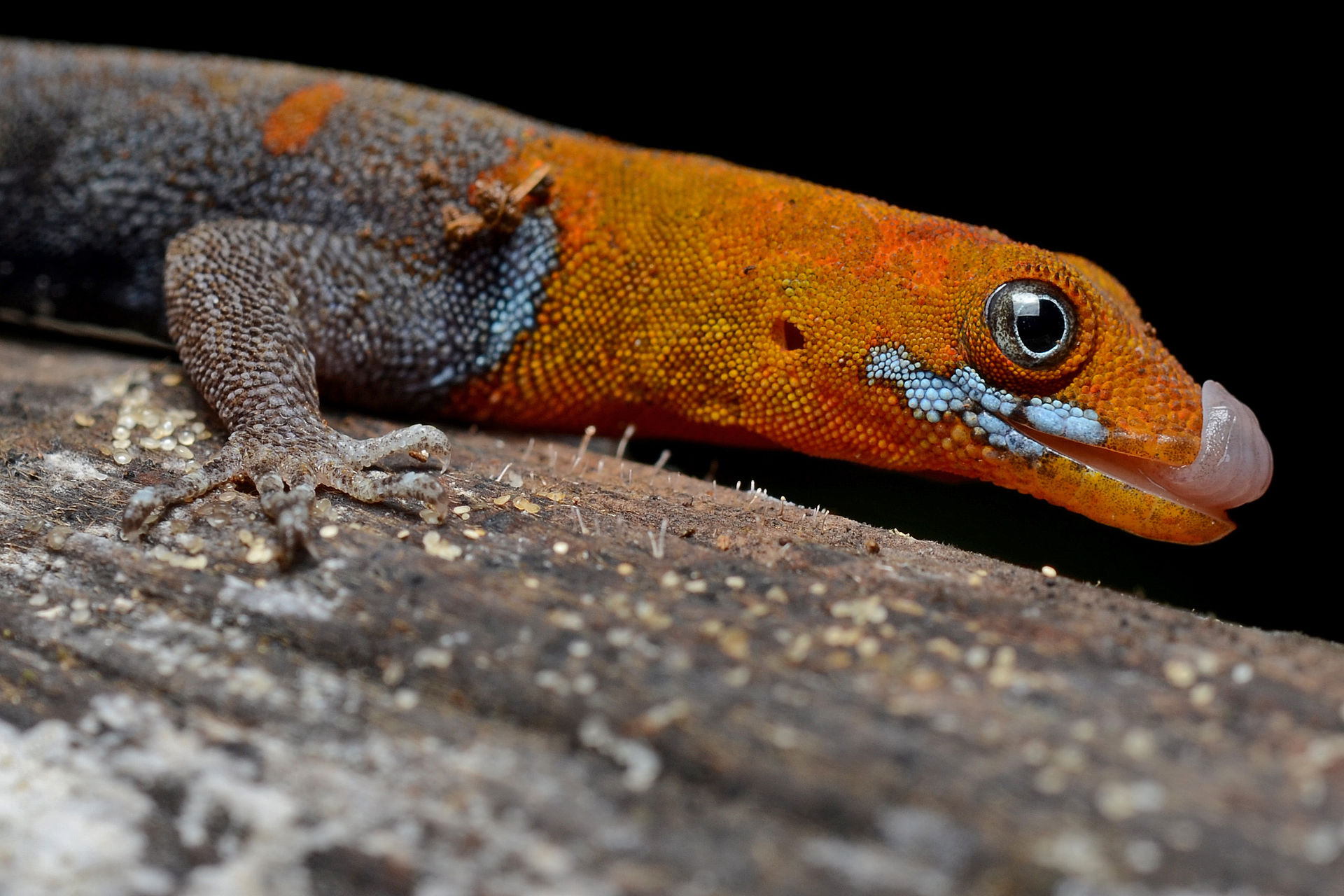 A male gecko with orange head

These small geckos can be found in Central and Southern America where the temperatures are warm. The male and female gecko can easily be identified with females being dull gray and males being bright and colorful. They don't have sticky pads like most geckos, these geckos have claws, similar to lizards.

These geckos can grow up to ten centimeters. Males have yellow or orange heads with dark blue bodies and females tend to be gray to white with brown heads. Their diet consists of insects and they hunt at night, avoiding direct sunlight. These geckos can be found in tropical forests and in homes.

A colorful male lizard with its orange head

The orange throated flat lizard is a flat lizard with females being brown to black in color with white stripes. The males are colorful with blue green bodies, red tails, and orange heads. They have a black collar on the throat. These can be found in Southern Africa where they live in sandy outcrops.

These lizards are rock specialists and they tend to occupy narrow cracks. Being social animals, they live in dense colonies. Males create territories only during the breeding season. The males have beautiful coloration. Territorial disputes see the male expose their bright belly by pointing it towards their rival. They are also known to raise their head and forebody to reveal their bright throat and chest. The orange throated flat lizard produces one to two eggs each year

The brown anole can be found just about anywhere in the United States. Originally from Cuba and the Bahamas, it can ow be found everywhere from Southern California to Texas. These are very invasive lizards. These are brown lizards that have black or dark brown markings on the back and light colored lines on the sides. They can change color, often the dewlap can change from yellow to bright red or orange

Males can reach up to 22 centimeters with females growing up to around 15 centimeters. It's not uncommon to see red headed brown anoles in your yard.
Previous Post Baby Leopard Gecko Care Next Post Fantasy Pacman Frog