Are you wondering what that lizard with a blue belly is in your yard or the one you came across during your weekend hike?

There are thirteen lizards that have blue bellies or blue patches on their bellies in the United States and Canada.

Continue reading to find out more about these lizards, helping you identify them with ease. 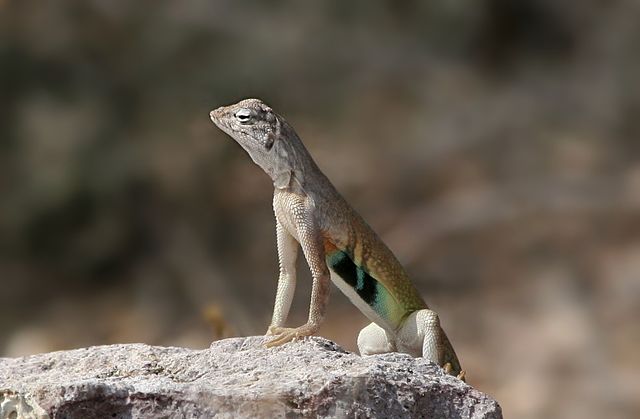 The zebra-tailed lizard (Callisaurus draconoides) is from the Southwestern United States and Northwestern Mexico. It lives in the desert, where the soil is hard and the vegetation is scattered.

These lizards can grow up to four inches or ten centimeters snout to vent. They are sandy brown in color with dark gray spots on the back and crossbands on their tail.

Males tend to have blue patches on their belly, while females have no blue coloration. 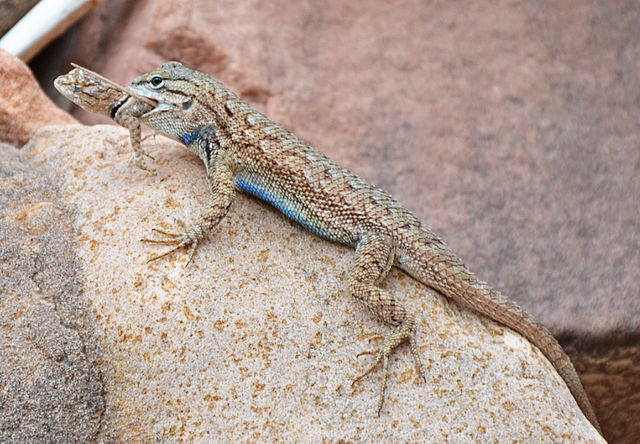 The desert spiny lizard (Sceloporus magister) comes from North America and can also be found in California, New Mexico and Mexico.

Adult males have blue and violet patches on the belly and throat, their tails and sides are a green blue color.

Females and juveniles do not have blue coloration, but rather have dark spots on their belly and backs.

They have triangular yellow or brown spots on the shoulders. Their body length can reach up to six inches.

They are darker in color during winter, lightening in the summer months. Being darker when it’s cooler, helps them absorb more heat while lightening in color reflects solar radiation. 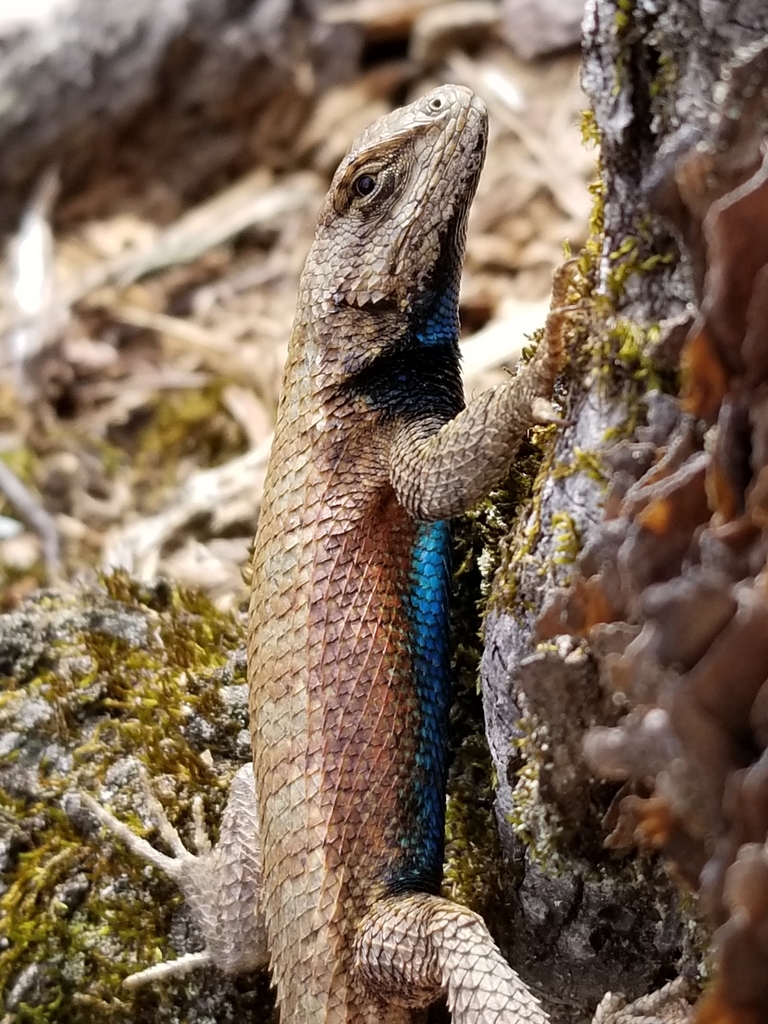 Image by Kimberly Scott via iNaturalist

The eastern fence lizard (Sceloporus undulatus) is a medium sized lizard found on rock piles and forest edges in the eastern United States. This lizard can be found throughout the United States from Florida through to New York.

These lizards can grow up to 19 centimeters or 8 inches, including their tail. They are gray or brown in color with a dark line that runs along the thigh.

Females are usually gray with dark wavy lines on her back with a white belly and black flecks, some have blue on the belly and throat.

Males are brown, but during the summer months they are a blue green color with black sides and throat.

Juveniles look like females but are darker in color.

The sagebrush lizard (Sceloporus graciosus) is common and found in the western United States. These lizards are very similar to the western fence lizard but can be distinguished by its smaller and finer scales.

The dorsal scales are keeled and gray or tan in color. The main color is light gray or tan stripe running down the back with a lighter stripe on either side.

These lizards often grow to around four inches or nine centimeters from snout to vent.

These are gray, brown, or olive in color. with blue or green on the dorsal surface. There is a black bar on the shoulder and irregular patterns of banding, which is identified on the tail and body.

Females have a white or yellowed belly, while males have blue patches on the throat and abdomen.

During the breeding season, males often develop orange coloration. Juveniles look like adults but have no blue markings. 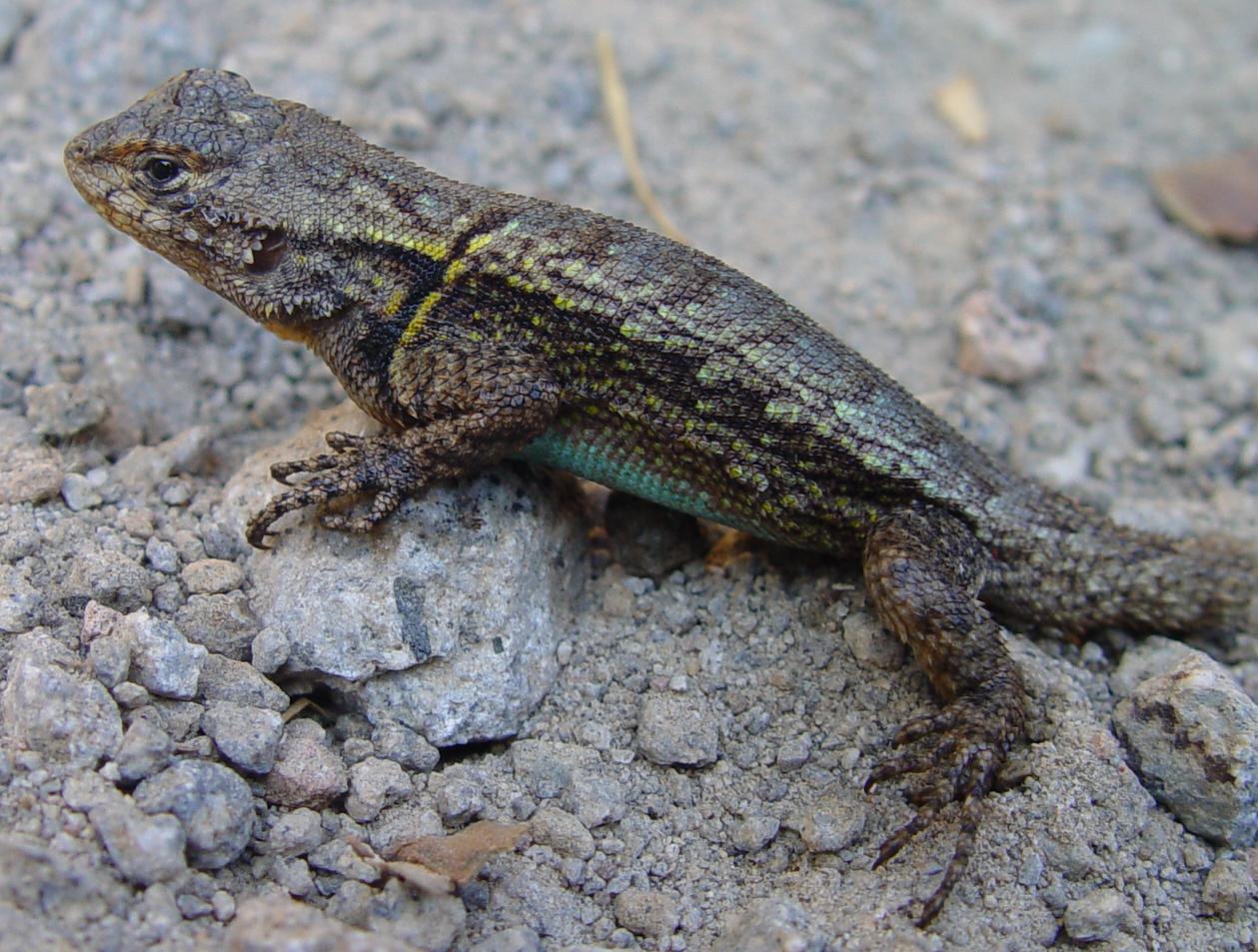 The graphic spiny lizard (Sceloporus grammicus) comes from Mexico and the southern United States. This lizard is a fat bodied lizard with a tail that is slightly longer than its full body length.

Adults can grow up to eighteen centimeters or seven inches. They are olive or gray with up to six dark crossbars. The tail and forelegs have narrow crossbars. 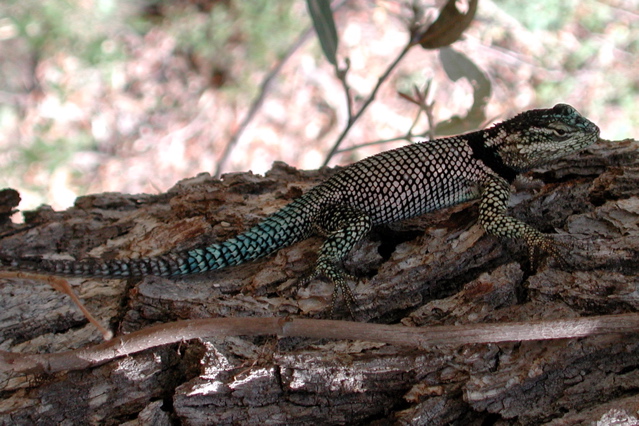 They can grow up to four inches from snout to vent and the edge of the color has a thin white line, making it easily identifiable.

Their base color is gray and olive. Their heads are dark gray or olive with a pale scale which is edged with black. The pale scales reflect oranges, blues, green sand pinks. The underside is white and gray with males having blue patches on the belly and throat.

Females have very faint or no belly markings. These lizards can be found in forests, rocky canyons, outcrops, woodlands, and more. 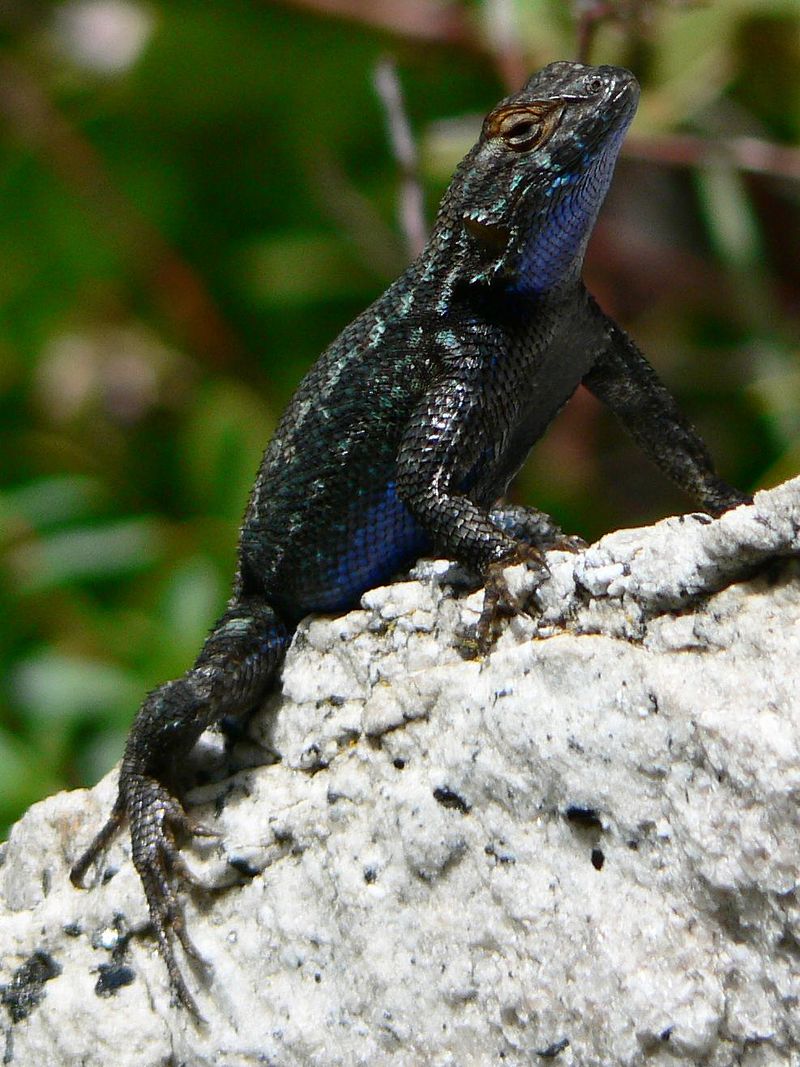 The western fence lizard (Sceloporus occidentalis) is common in Arizona, California, Nevada, Utah, and Northern Mexico, to name a few.

The adult lizards have blue bellies.

They are brown or black in color with black stripes on their backs. Their bright blue bellies are what really sets these lizards apart from the others. The sides of their limbs are yellow with blue patches on the throat.

Females and juveniles don’t have the same coloration. In some, the males have bright turquoise blue spots on their dorsal surface. Image by Kimberlie Sasan via iNaturalist

This lizard (Sceloporus olivaceus) is native to the south-central United States. Adults grow up to twenty eight centimeters or eleven inches in total length and are gray with black or white coloration with red or brown blotches on the back.

Males have blue bellies. The underside is light gray with males enjoying blue patches, they have long toes with sharp claws, which assist in climbing.

These are very shy and nervous lizards and will retreat quickly if approached. 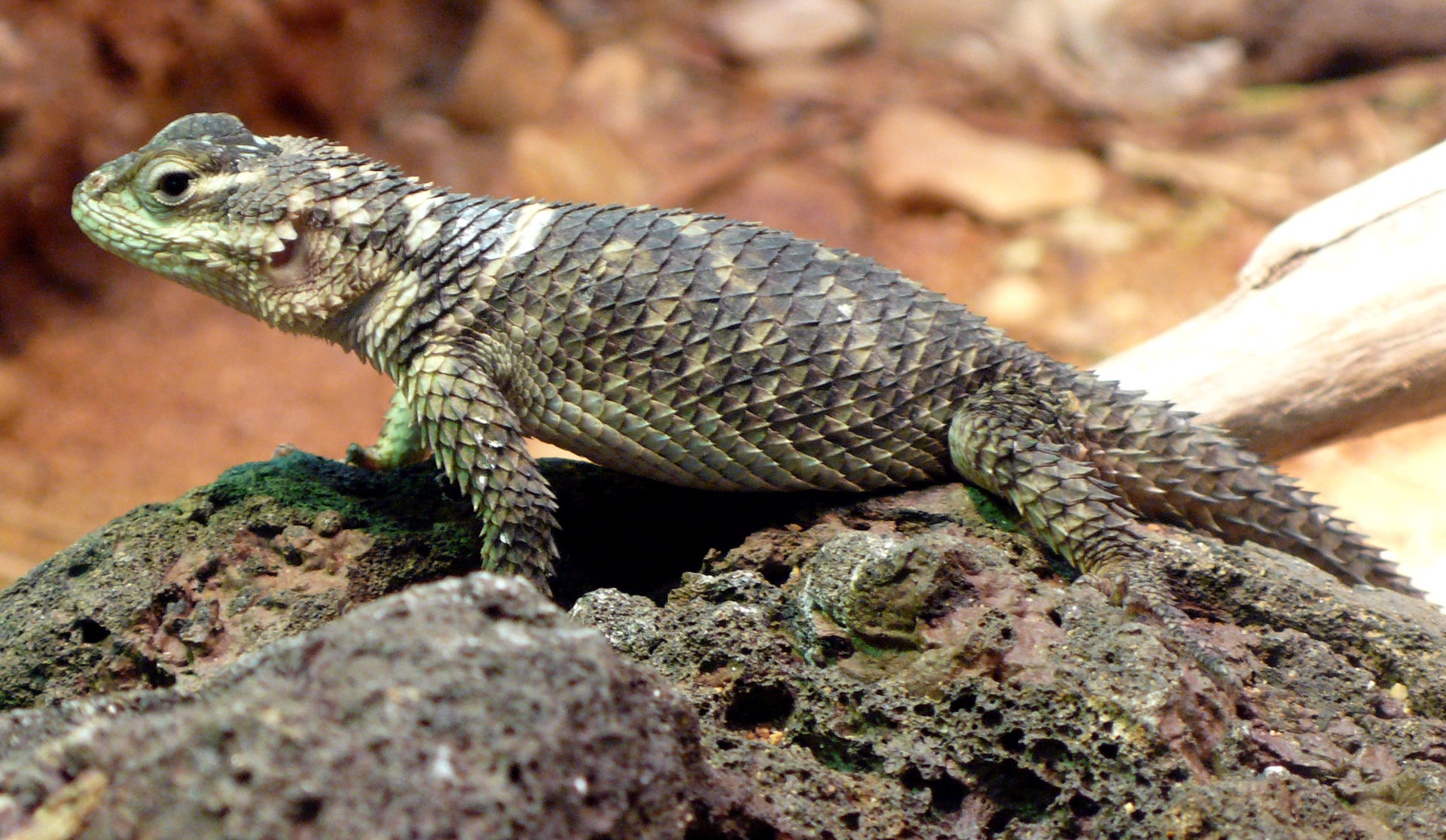 The crevice spiny lizard (Sceloporus poinsettii) is a small lizard that can be found in the United States and Mexico.

They are usually gray in color but can have a red brown appearance with black and white collar. The underside is gray, with males boasting blue patches on both sides of their belly. The tail has black banding.

They can grow up to twelve inches or thirty one centimeters in total length.

They are nervous lizards and will retreat quickly if approached.

They can be found in semi-arid habitats. 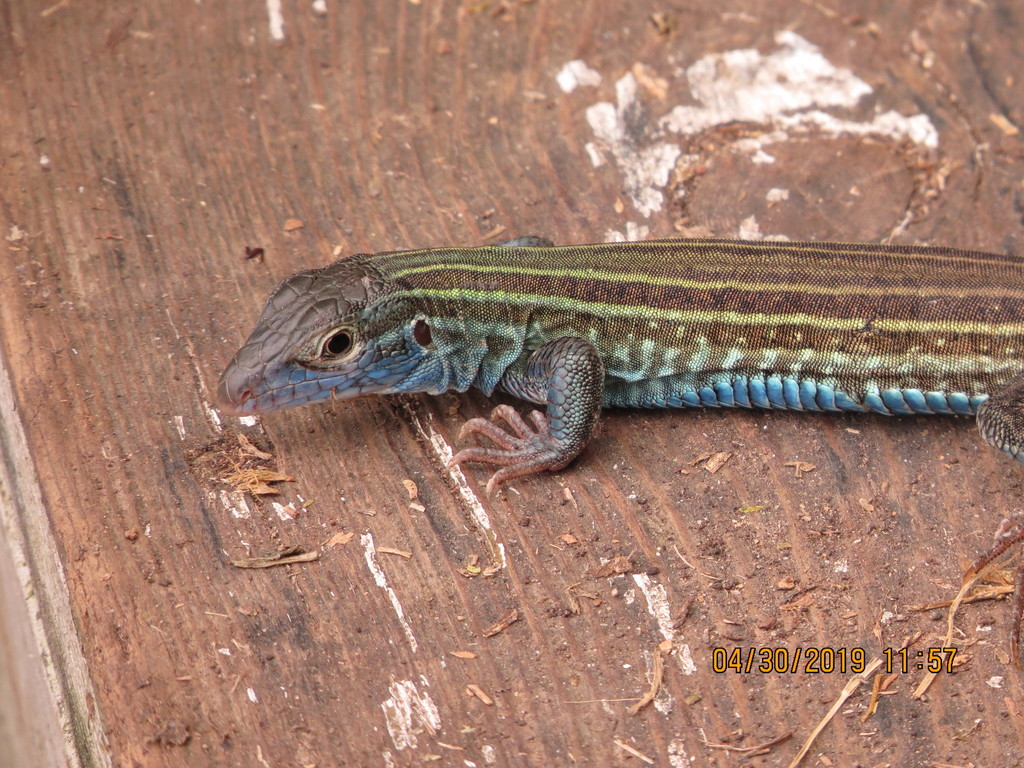 The Texas spotted whiptail (Aspidoscelis gularis) is a long-tailed lizard found in south-central and southwestern United States and North Mexico. These lizards grow up to twenty eight centimeters or eleven inches.

They are tan brown to green brown in color and have gray or white stripes that run the length of their body. The light-colored spots can be found on the sides with a white belly.

Males have a red throat and blue belly with blue patches on their chests. Females have pink throats.

These active lizards can be found in grasslands and semi-arid areas.

This lizard (Aspidoscelis inornatus) is found in the United States and Mexico. They grow up to ten inches and are usually black with yellow or white stripes from head to tail with a blue belly.

They are fast moving and very energetic lizards that will hide if approached. 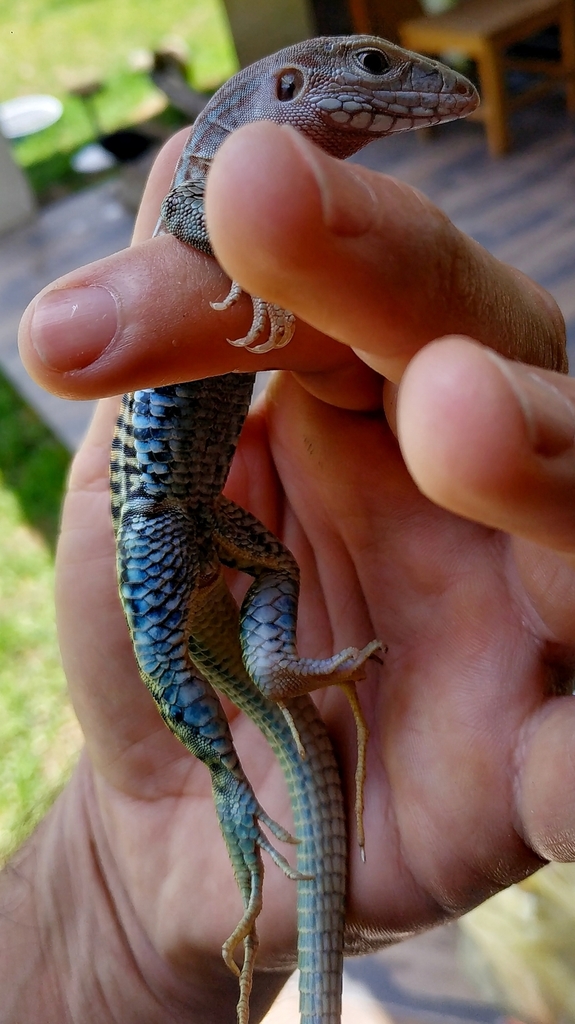 Image by Victor Gomez via iNaturalist

The plateau spotted whiptail lizard (Aspidoscelis scalaris) can be found in the southern United States and Northern Mexico. These are large lizards that grow up to 13 inches in length from head to tail.

They are dark green, black or brown and have up to seven cream stripes running down the body. In some lizards you will see some white spots between the stripes.

They have a pale blue or white underbelly with females having an orange throat.

This lender bodied lizard has a tail three times the length of its body.

These are also fast moving lizards that will run off if approached.

These are black, brown, or dark green lizards that have six green-yellow or yellow stripes running down the body from the head to the tail.

The tail is double the length of the body.

These lizards can run up to 29 kilometers or 18 miles per hour and will dart if approached.

The six-lined racerunner is typically dark green, brown, or black in color, with six yellow or green-yellow stripes that extend down the body from head to tail.

The underside is usually white in color on females and a pale blue in males. Males also sometimes have a pale green-colored throat.

They are slender-bodied, with a tail nearly twice the body length.