Anoles are lizards often found in forests and gardens in the United States. They are also sold in pet shops to be kept as pets.

The green and brown alone are native to the United States and are very similar, even though they vary in coloration. This article will compare green anole vs brown anole in all aspects.

Brown Anole – Some shade of brown. The shade can vary

Verdict – Only real difference in terms of appearance is the coloration.

Lean body with a triangular head and a dewlap below the jaw, which is used in territorial displays.

The dewlap on the green anole lizard is pink or in some instances red.

Tends to change color. This anole can be bright green or dull brown. The color is not matched to the surrounding leaves. Their color is prompted by light and temperature, along with a level of excitement.

A green anole will be brown when basking, green when scared and asleep. Sunlight will determine the vividness of the color.

This anole also has a lean body with a triangular head. They also have a dewlap below their jaw.

The brown anole lizard shows a red/brown dewlap which is dark in color.

A brown anole being aggressive will change the color of dewlap to black, when relaxed the anole may lighten in shade.

Both varieties offer the same appearance with one of the differences being that the green anole is able to change its appearance to brown, while the brown anole remains brown and cannot change to green.

The green anole changes color more than the brown based on its mood.

Similar sizes to the green anole with males reaching approximately eight inches and females in the region of six inches in length.

Both species are similar in size.

In the wild, this anole will live up to three years of age and up to six years in captivity.

This anole also offers a short life span of three years in the wild, but can live up to six years in captivity.

Both anole species have the same lifespan.

The green anole tends to live higher up in trees and bushes. They are often seen walking along fences. Only the hatchings tend to live on the ground.

This anole is actually native to the Caribbean, Bahamas and Cuba. Each location offers a different subspecies. All subspecies have managed to make their way to Florida and South Georgia, where it is impossible to tell the subspecies apart and where they came from.

The brown anole tends to live on the ground, which is easier for them to blend in and hide from predators.

Green anoles are the only native species in the United States.

The green anole is insectivorous and eats any insects that can fit into their mouths. They also eat smaller anoles as part of their regular diet. They love crickets, roaches and mealworms.

The anole requires water, but they don't always drink out of a water dish. You need a shallow dish to reduce the risk of drowning.

Consumes a diet of insects that can fit in its mouth and smaller anoles. These anoles also eat a varied insect diet of small roaches, crickets and mealworms.

They also require water, but may not drink as expected, rather looking for water on leaves and branches, which is why misting now and then maybe useful to ensure your anole gets the hydration it needs.

Green anole hatchings tend to live on the ground, where the brown anoles are searching for food, making them an easy target.

No difference in diet between the two species, except the risk of the brown anole eating the green anole hatchings on the ground.

Common pet lizard, easy to maintain and a great starter lizard for any family. They require vertical enclosures as they love to climb.

Make sure there is plenty of foliage to provide excellent hiding places for the anole to feel secure.

They require around eight hours of sunlight each day with basking temperatures around 90ºF.

This is also a common reptile as a pet offering easy maintenance with eight hours of sunlight and 90ºF basking temperate.

In addition to this, the brown anole loves to climb and hide, so ensure you provide plenty of vertical climbing places with fines and plants.

Both species require the same habitat requirements when kept in captivity, making both an easy first-time reptile pet for any family. 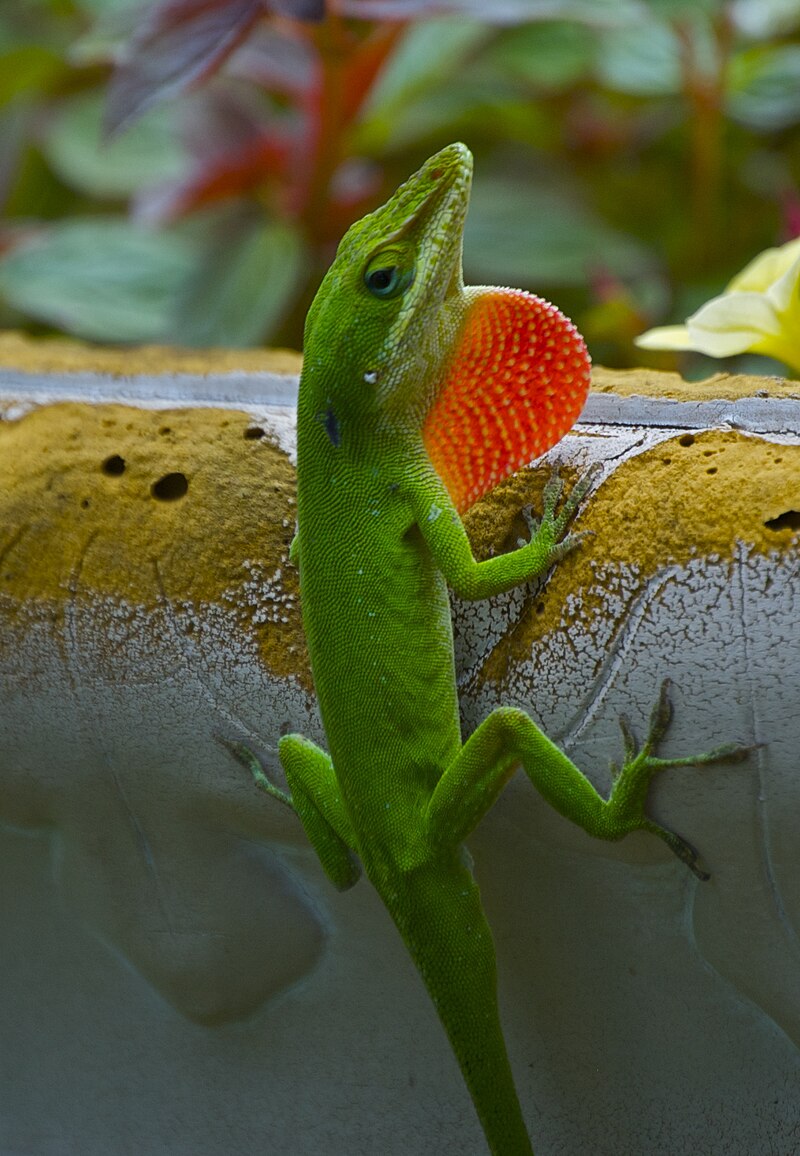 Anoles are better known as Florida yard lizards. Anoles do not change their colors like a chameleon, the green anole lizard will be brighter in color when healthy and in a green habitat with reduced stress. The brown color may shine through when the lizard is basking. The green may be more vivid when the anole is stressed. The brown anole's hormones will turn his color of brown to gray or back, this is determined by temperature.

Male and female anoles of both species have dewlaps. A display of the dewlaps is used when females select a suitable mate.

Around ten percent of all anoles will lose their tails by shedding it on purpose. Just like leopard gecko, anole tails do grow back after a few weeks. Tails are used for balance when climbing.

Should be fixed. Thanks for pointing out 🙂

I have brown anoles living on my porch. If they are territorial, why are they together? Today 3 hatchlings on my porch. Some are older so they are multiplying. Adults are also still here

i am getting two anoles to breed green anoles so maybe you guys could help me with that?

Why do some male green Anole have a raised fin on their back and neck? We have seen these around our home a few times in South Carolina 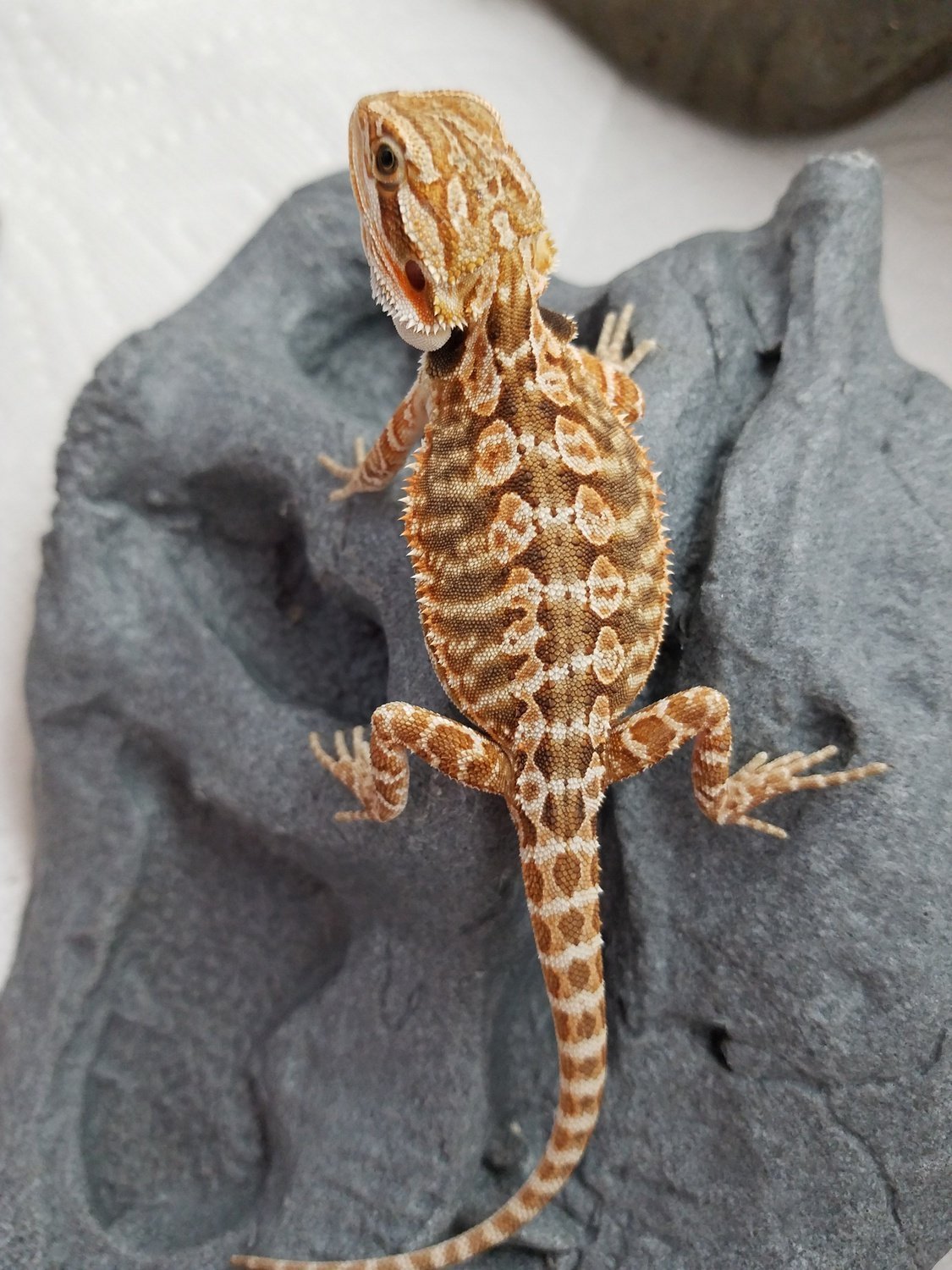