If you have ever heard of a black widow spider, then you probably think of a dangerous spider. In fact, it is only the female black spider that is dangerous to humans.

It can be confusing as there are a number of spiders that look just like the black widow, some are completely harmless, while others are also considered dangerous.

Wondering if it was a black widow you saw? Continue reading to find out more.

What Are Black Widow Spiders?

In North America, there are a number of black widow species: 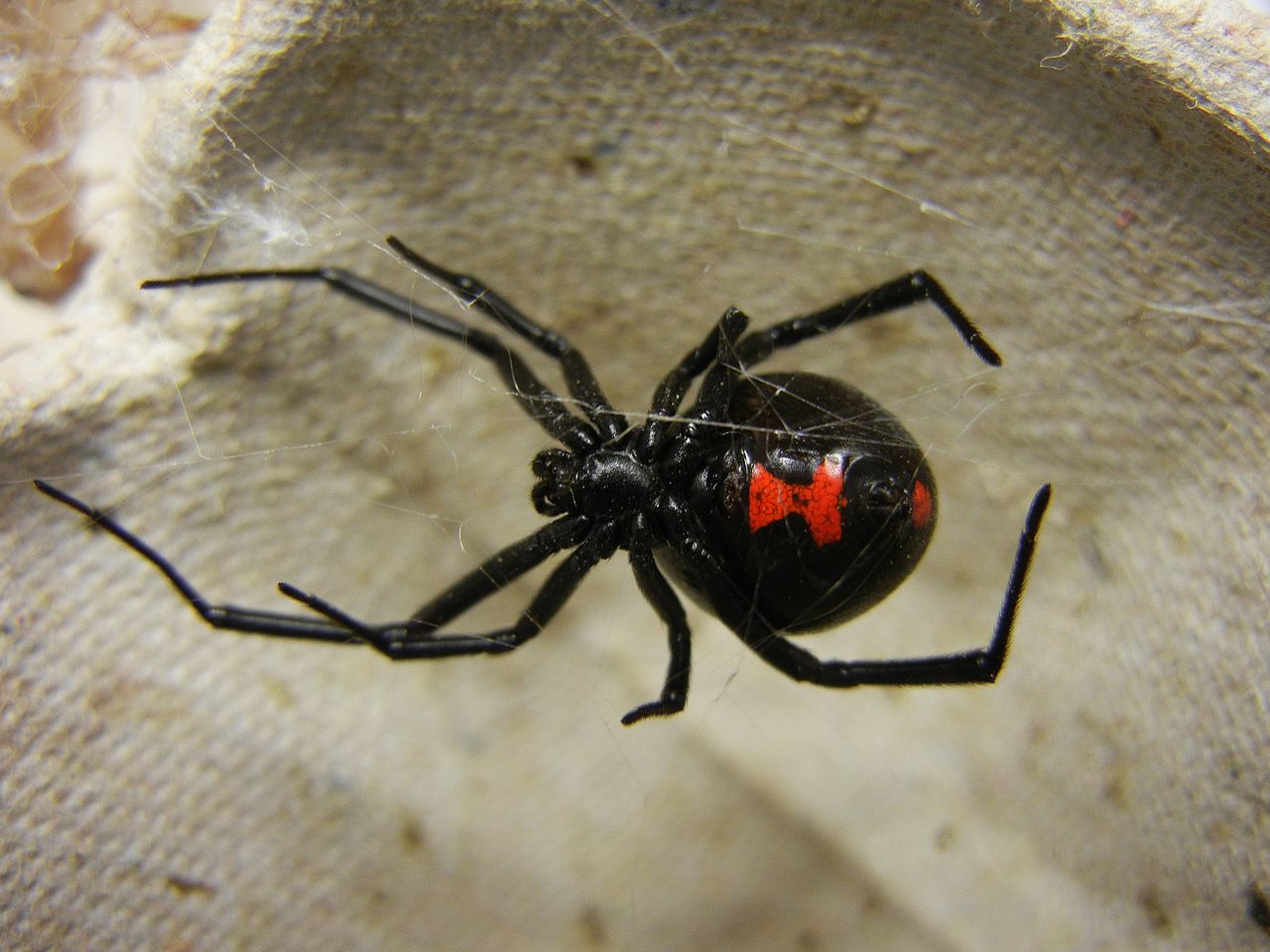 Female black widow spiders are the most dangerous and are easily identified by the red hourglass on her belly with a shiny black body.

Males, on the other hand, have red and yellow bands and spots on their backs. They also have longer legs and smaller bodies. 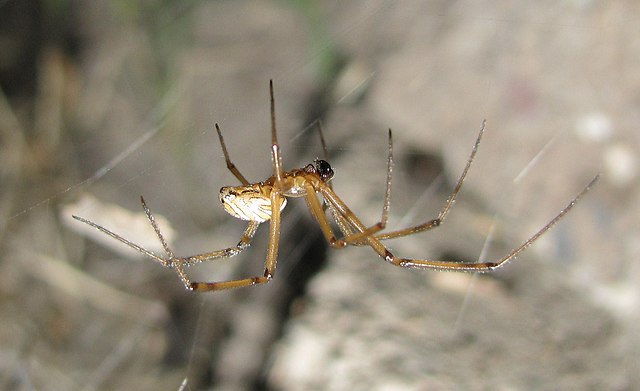 How to Identify a Female Black Widow Quickly

If bitten by a female black widow, you can experience some unwelcome side effects due to her toxic venom.

Symptoms include nausea, dizziness, sweating, pain at the bite site, high blood pressure, chest pains, salivation, and headache. In addition to this, other symptoms include itching, rash, eye-watering, problems breathing, and swollen eyelids.

People might develop many different symptoms after getting bitten by a black widow spider. Some of these symptoms might be mistaken for the symptoms of another disease, especially if the patient in question has a tendency to get sick.

In the event you think you have been bitten by a black widow, it’s recommended you seek urgent medical treatment at your closest emergency room.

If there is someone with you, ideally they should capture the spider in a jar and take it with you to the emergency room.

Where You Can Encounter Black Widow Spiders

Black widows are usually found where there is sparse vegetation, hollow logs, and piles of debris.

They are seldom encountered indoors, though they may be brought into the home in firewood or other items that have been sitting outside.

These are nocturnal spiders, that will hide in their nest during the day. At night they prowl for food on their webs, hanging upside-down waiting for prey to pass by.

Black widows are almost everywhere in the United States. 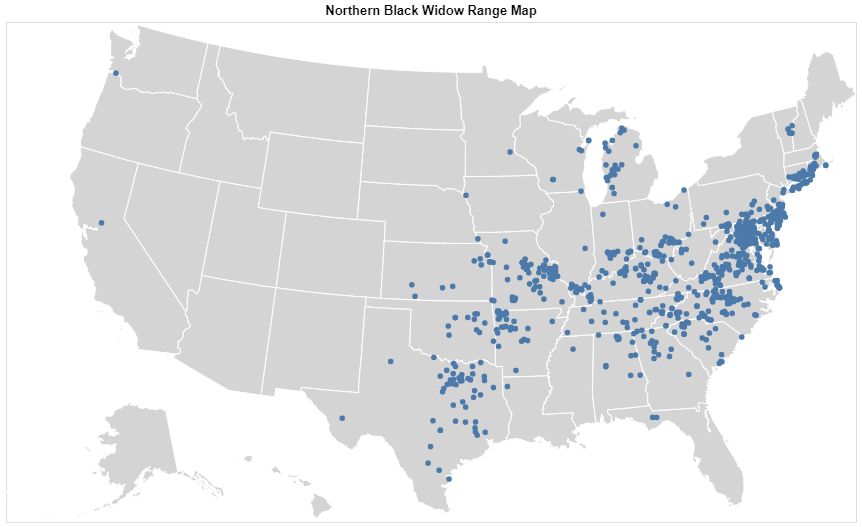 As in the below map, southern black widows are often reported in the southeast states such as Texas, Florida, Oklahoma, Louisiana, Alabama, Georgia, Mississippi, South Carolina, North Carolina, Virginia, and more. 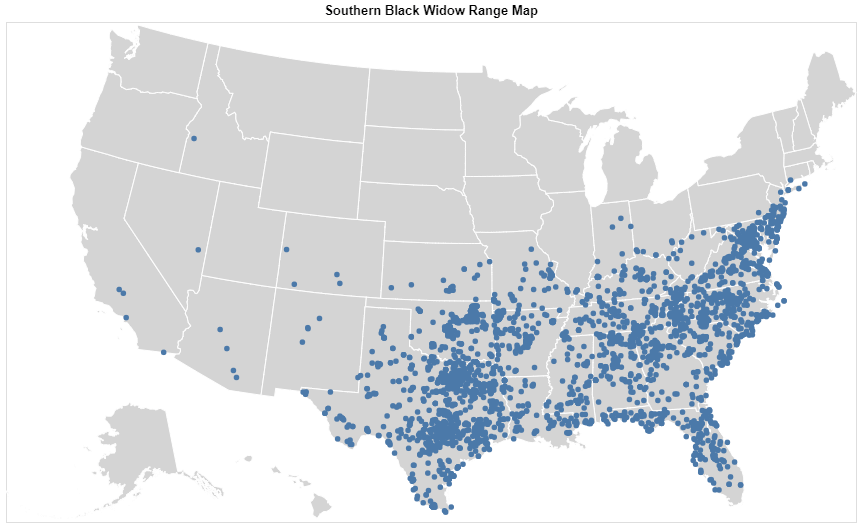 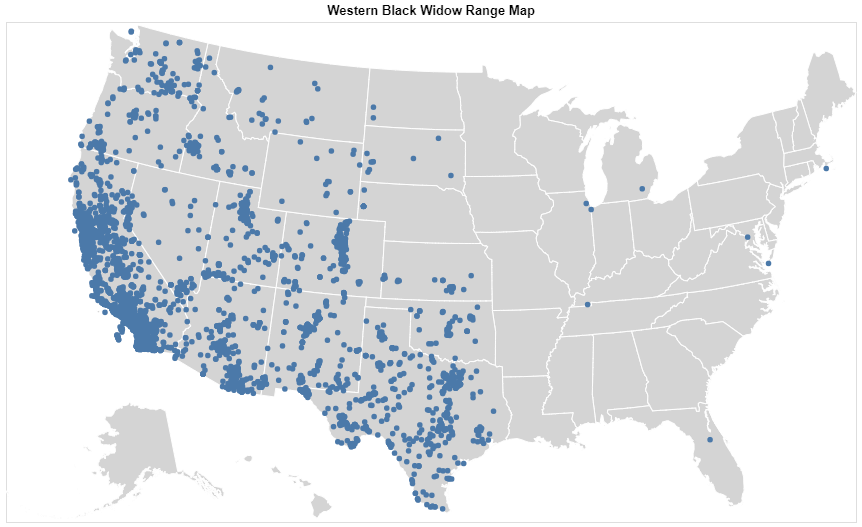 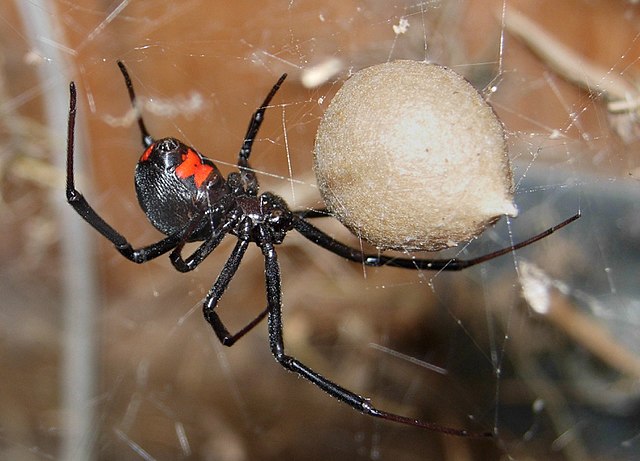 A black widow with an egg sac

Black widows have a small sac that contains their eggs. The egg sac is only one centimeter and holds up to two hundred and fifty eggs, which take around two weeks to hatch. The spiderlings stay in the sac until their first molt.

Note that this is when the female black widow is mot protective and will bite if you go near the egg sac.

There are a number of spiders that can be mistaken for the black widow, these include: 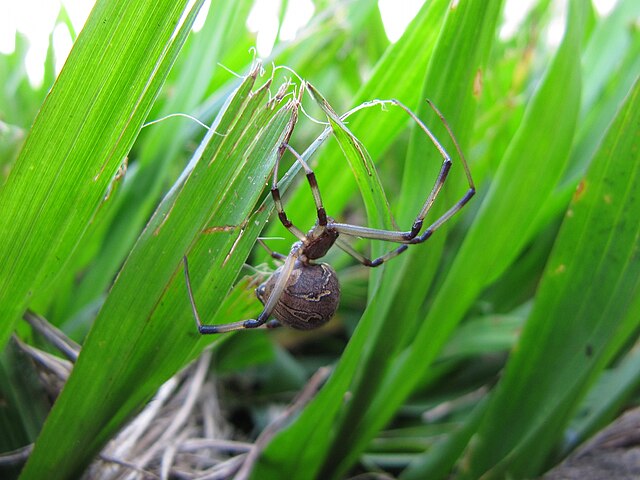 The brown widow is related to the black widow but is not as dangerous.

Brown widows have black and white patterns on the side of their abdomens and an orange to yellow hourglass shape.

These spiders are smaller and lighter in color than the black widow with stripes on the legs.

If you are bitten, their bites are painful but are not considered dangerous. 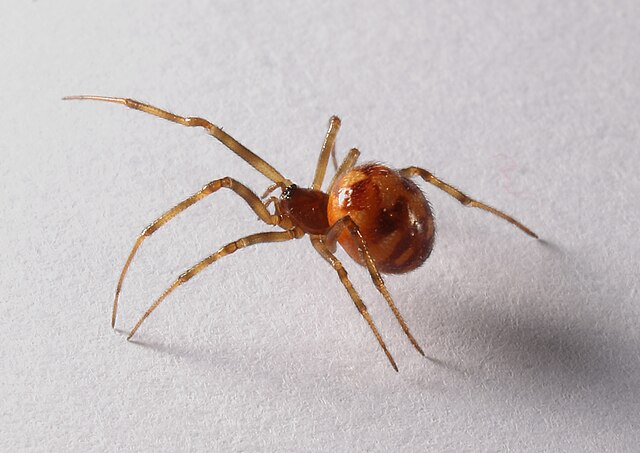 Triangulate cobweb spiders are common house spiders that tend to hide in the dark corner of outbuildings.

They have poor eyesight, relying on their sense of touch, feeling vibrations to find their prey.

They are small in size and are not aggressive towards humans.

These spiders are considerably smaller than the black widow, growing to 6mm in body length with a brown to orange head region and yellow legs.

Their bulb-shaped abdomen is cream with purple to brown zigzag patterns. 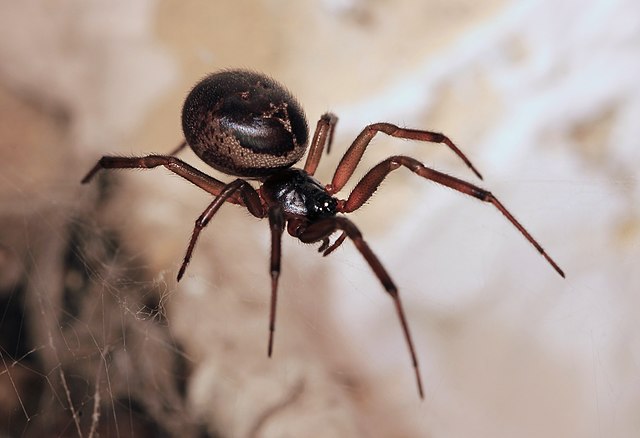 Noble false widows are the largest in the false widow species and are often found near homes.

They have dark brown on the front of their bodies and their legs.

The large bulb-shaped abdomen can vary in cream with dark brown, sometimes there are very few markings if any.

Bites from the noble false widow are rare, they are not an aggressive species.

They grow to a similar size as the black widow, of up to 14 millimeters.

False black widows are found throughout the United States and are sometimes called cupboard spiders.

Their body shape and color are similar to a black widow, as are their webs.

It is considered medically significant if you are bitten by a false black widow, even though their bite is not as dangerous. It will cause severe pain.

The female has a large bulb-shaped abdomen with a body-color that ranges from brown to black or purple.

They do not have the red hourglass warning sign on the underside of their abdomens. 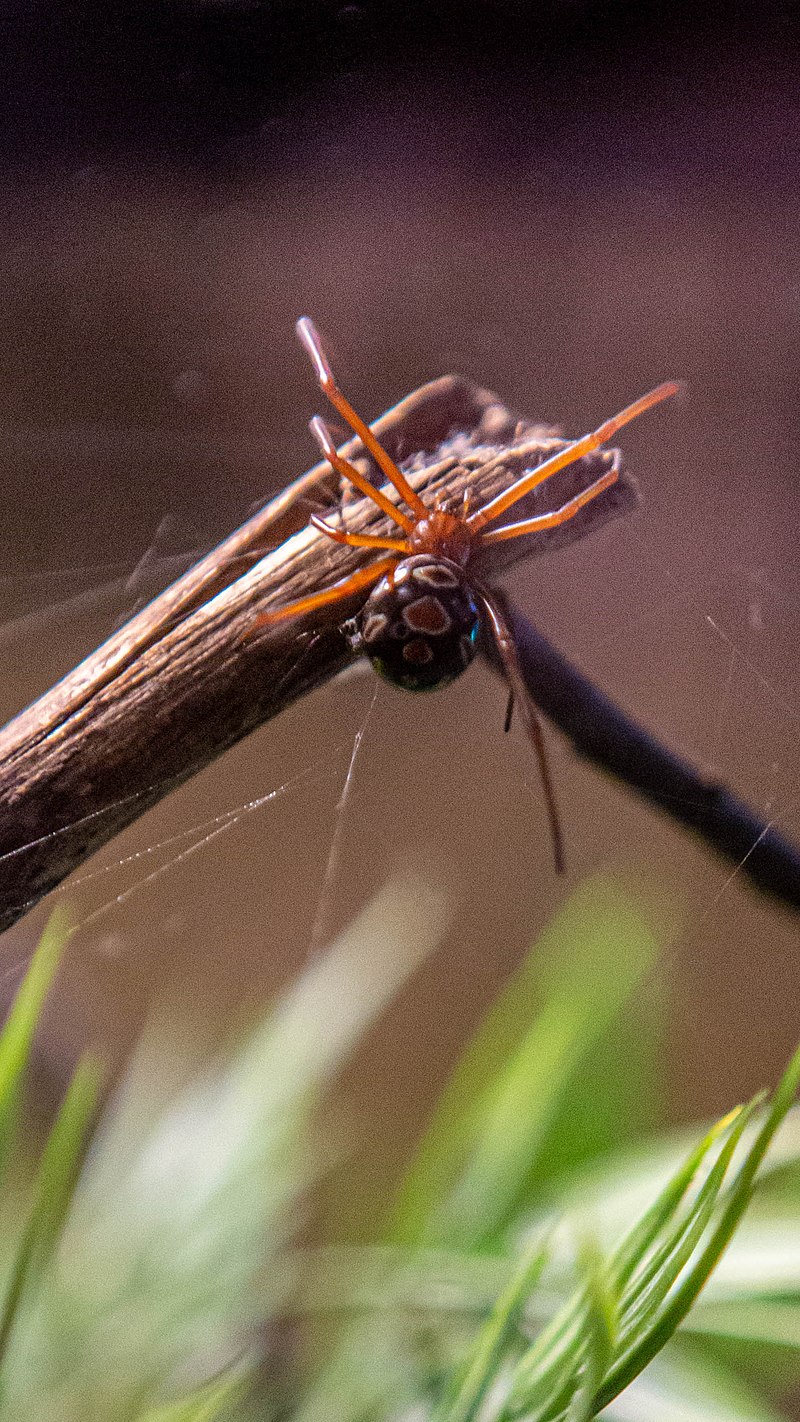 Red widows are endemic to central and southern Florida, where this spider prefers a sand dune habitat.

They have an orange to red head space with a black abdomen, that has yellow rings that outline a row of red spots.

The legs are red.

They do not have the famous red hourglass on their underside, this is replaced with two small red marks.

This is considered a venomous spider, but there are no bites recorded as it seldom comes into contact with people. 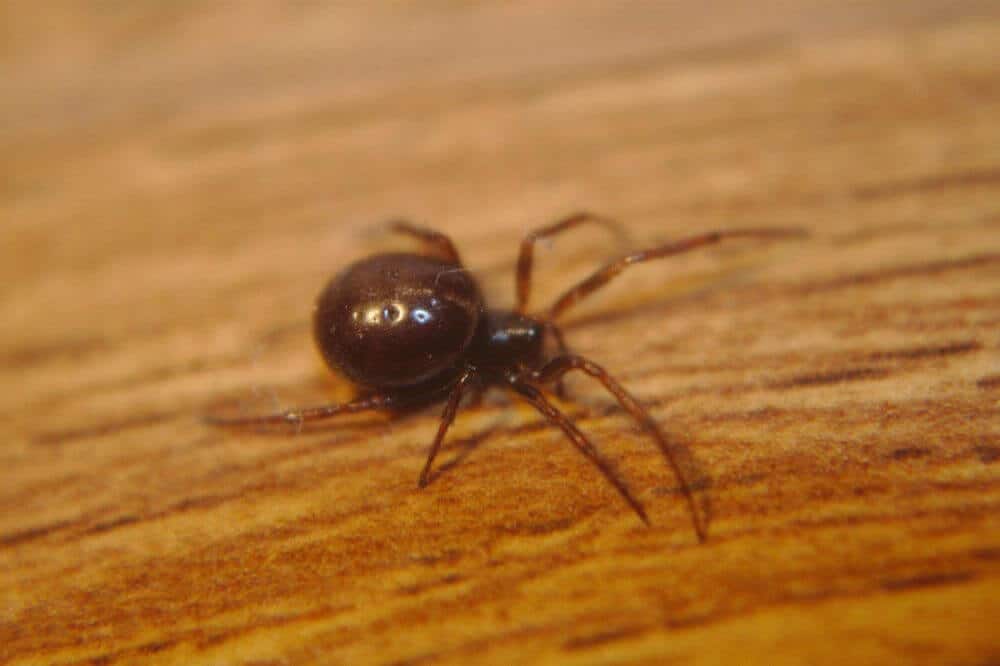 The Boreal combfoot spider is often confused with the black widow, though they have a red to brown colored abdomen with a T-shaped marking on the front end. The underside is lighter than the top of the abdomen.

They are encountered East of the Rocky Mountains, though they are known to be moving south. They are usually found under stones, in rock crevices, and outbuildings.

They are significantly smaller than the black widow, growing to only 7mm in body length. 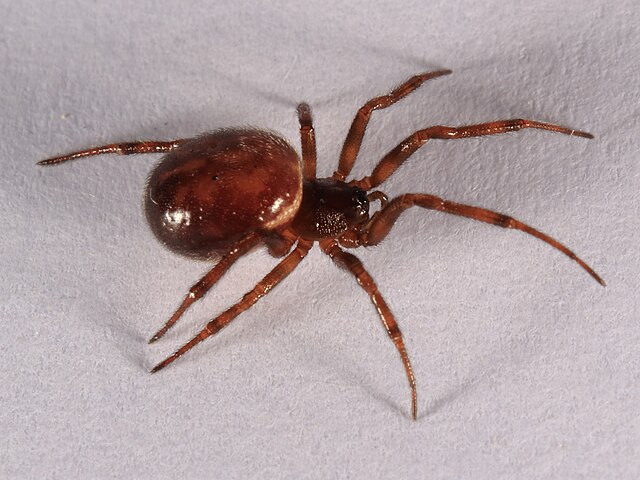 Rabbit hutch spiders are common in North America and are often encountered close to homes, especially in sheds and basements.

They have bulb-shaped abdomens that are brown with a broken line down the center and another on the anterior portion of the abdomen. They have an interesting infinity pattern on their underside.

They can grow to around 7mm in body length. 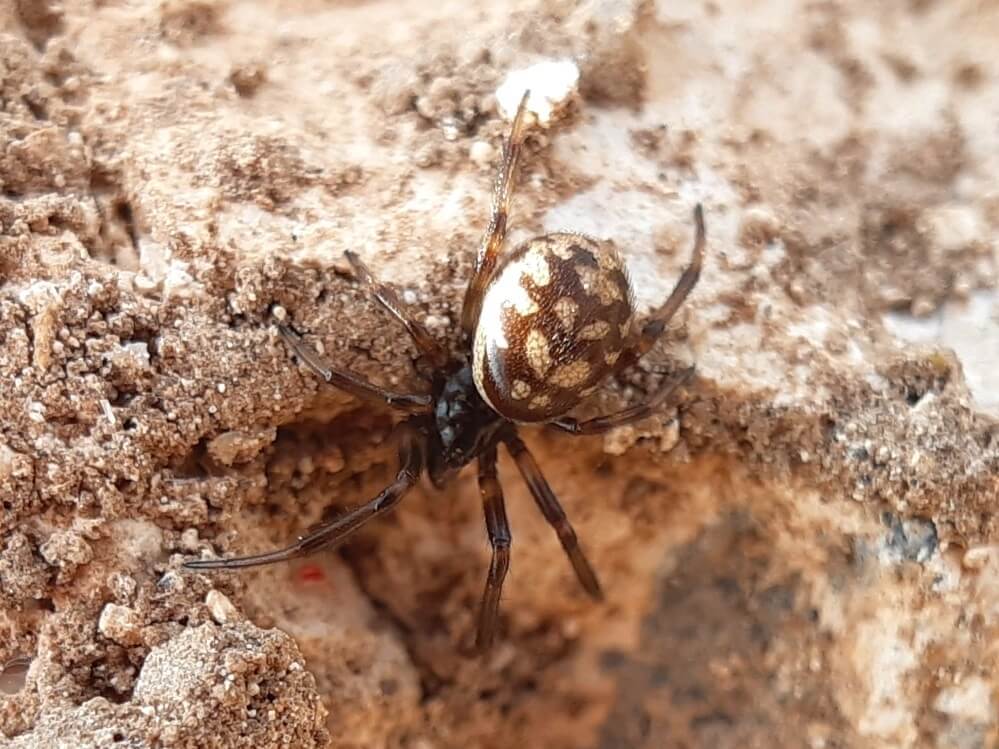 The white-spotted false widow is a common cupboard spider that spins its webs in undisturbed areas of the home and garden.

They are often mistaken for the dangerous female black window, though they are significantly less harmful.

They come in a variety of sizes and colors, which range from red plum and satin black to pale brown. Their bulb-shaped abdomens have white, beige, or orange markings. 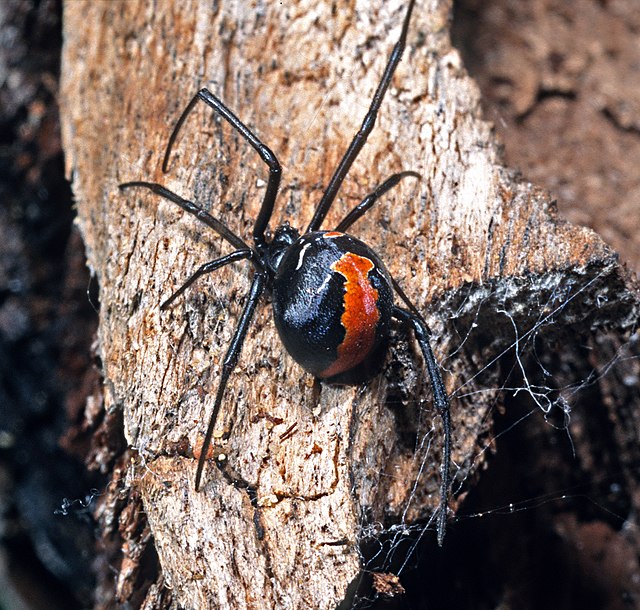 The redback spider has slender legs with the front pair being longer than the rest with a one centimeter body length.

They have a rounded abdomen which is brown or deep black with red to orange stripe on the upper surface, along with an hourglass shape on the underside.

Some females have plain black abdomens without any marketings.

Spiderlings are gray with darker spots.

Males are light brown in color with white markings on the upper sides of the abdomen and a pale hourglass on the underside.

This is also considered a dangerous spider and if bitten, you should seek medical treatment as the pain can be intense in the bite area. 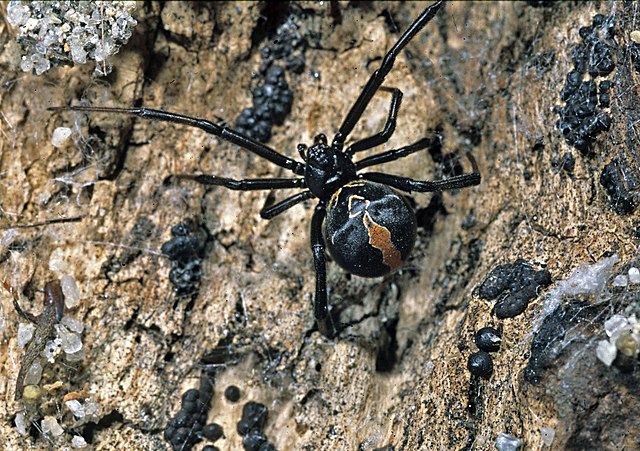 This medium-sized spider grows to around 8mm with a leg span of 32mm.

The female has a large black bulb-shaped abdomen, similar to the size of a pea with slender legs.

They also have a white-bordered orange to red stripe on the back.

Their abdomen is velvet black, which looks silky in appearance, rather than the shiny black of the black widow.

They have a red patch or partial red hourglass on the underside of the abdomen.

There are variations in this species which are completely brown with yellow or dull stripes and cream-colored spots. 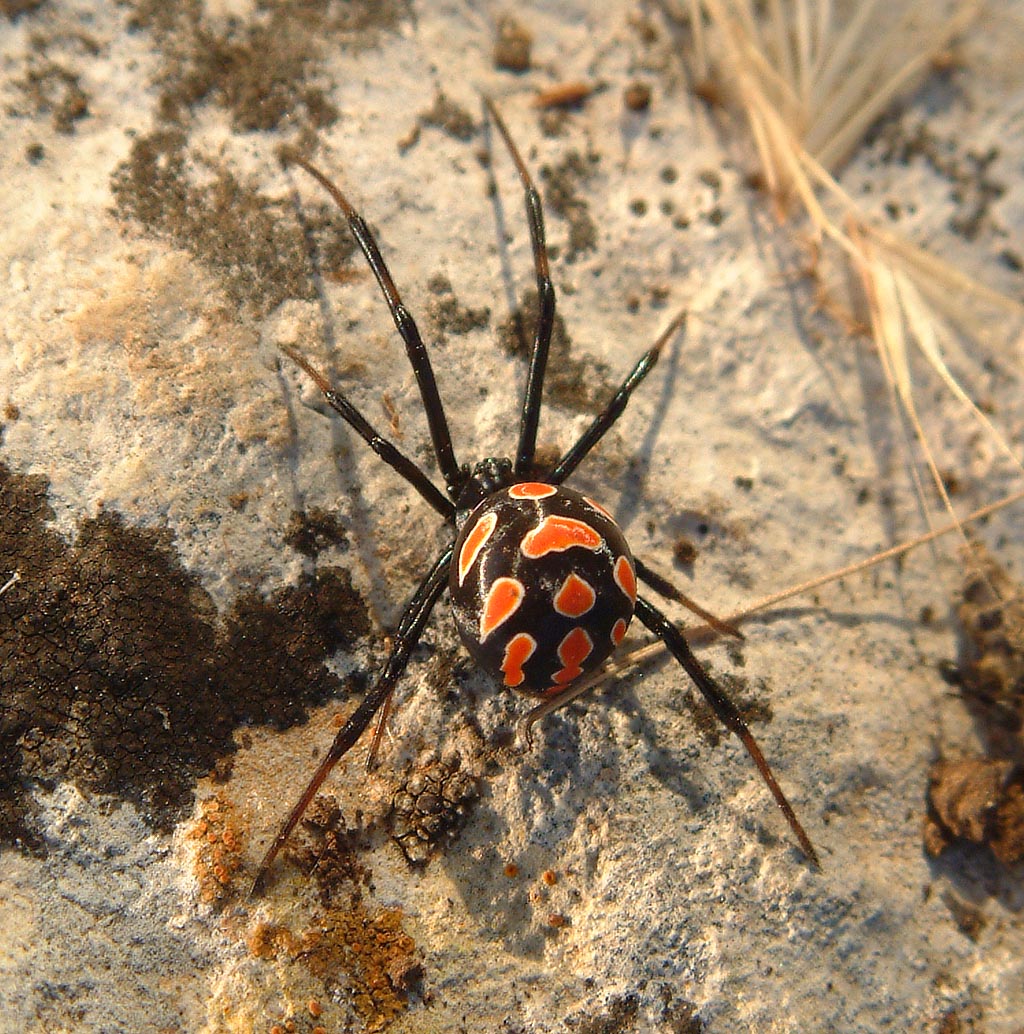 The European black window is best identified by the thirteen spots on the dorsal abdomen. The spots are usually red, but they can also be orange or yellow.

Females can grow up to 15mm in body length and the female is considered dangerous to humans and pets.

A bite from this spider is considered medically significant and can be fatal in some rare cases. 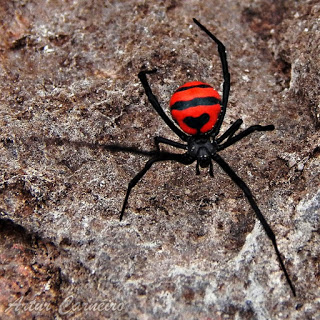 The South American black widow female can grow up to 17mm in body length with the body and legs being black and red, which helps you identify them apart from the black widow.

Males are white or brown in color.

They are a nocturnal species and are not normally aggressive towards humans, though females will attack to protect their eggs.

Unlike the black widow, a bite from the South American black widow usually only affects children and those with respiratory problems and cardiovascular issues. 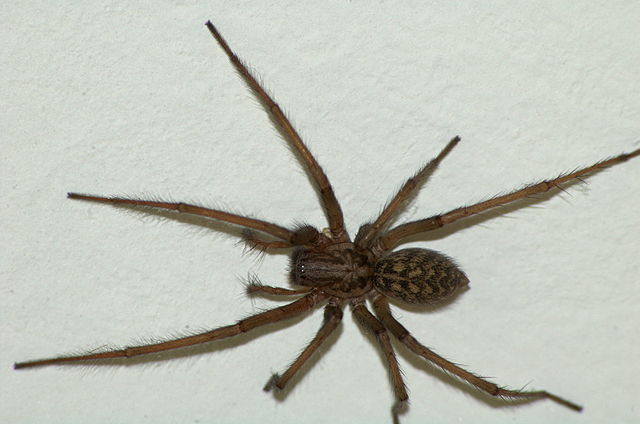 The domestic house spider has an elongated body with flattened head space.

They are smaller than the black widow, growing to 11.5mm in body length.

They are dark orange to beige or brown in color with striped legs and two dull black stripes on their heads. The abdomen in brow, beige and gray mottling with a chevron pattern. 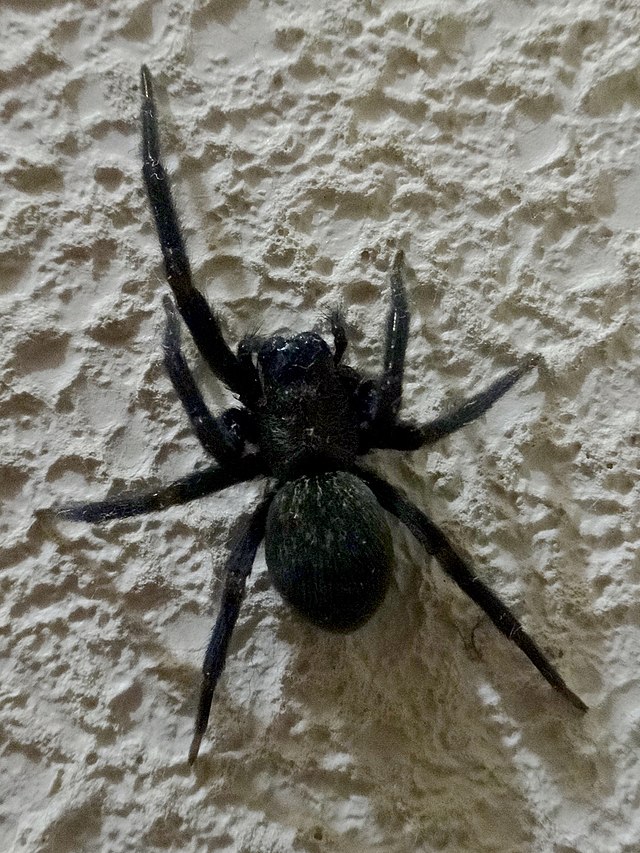 The black house spider female can grow to 18mm in body length with a 30mm leg span. They have a dark brown to black head space and legs with a charcoal gray abdomen, along with being covered in velvet hair.

While they are venomous, they are not considered dangerous with bites being rare. If you are bitten, you can expect pain with localized swelling.

The black widow is shiny black in color without any patterns, dots, or stripes. The underside of the female has a large red warning sign, an hourglass shape. These are the two things to bear in mind if you think you have been bitten or seen a black widow.

While there are many spiders you may think are black widows, the other spiders usually have different colors, they are different sizes and don’t have the bright red hourglass on their underside.

If you think you have been bitten, seek urgent medical treatment at your local emergency room and if you can, take the spider with you to help the medical team identify the best course of treatment.