Ants are such common insects that most of us barely give them a second thought. But in fact, they're a fascinating species, with over 49,600 known varieties found all over the world

While ants are often confused with termites, due to their similarities in appearance and behavior, it’s more surprising that many spiders have evolved specifically to look like ants.

Wondering why this is, or if it was an ant or a spider you saw? Continue reading and find out more.

Ants belong to the order of Hymenoptera, which also includes bees and wasps. They've existed on earth for millions of years.

The oldest known ant fossil, found in Myanmar, dates back 99 million years, though it’s believed they may have been around long before that – up to 168 million years ago.

Ants are some of the most numerous insects on the planet, with over 13,800 named species.

Their astonishing success is due to the way they organize their colonies, seeking out and creating suitable resource-rich habitats, and the effective strategies they’ve evolved to defend themselves.

In each next, there will be a queen, who may live up to fourteen years, and whose sole job is to reproduce.

Male ants have the sole function of mating with the queen, after which they typically die.

The ants we humans typically encounter are the wingless females, who perform multiple tasks: they search for food to bring back to the nest, they take care of nest hygiene and dispose of dead bodies, they care for each brood, and even train novices to forage.

Importantly for the survival of their colony, some females take the role of 'soldier' ants, defending their nestmates against intruders.

They are well-armed for the task, with powerful jaws for biting and gripping, as well as stingers that can spray or inject powerful formic acid to deter attackers.

With just one exception, spiders are predators. While a few large species feed on small birds and lizards, most feed mainly on insects or other spiders.

It’s no surprise that over millions of years, they have evolved into cunning and sophisticated hunters

Impersonating ants (or myrmecomorphy) is an effective strategy for any spider who either wants to hunt and eat ants, or who wants to avoid predators who may want to eat them.

Of the 49,000 plus identified spider species, over 300 have evolved bodies that resemble the three segments of an ant's body.

They also mimic the behavior of ants - for example waving their front legs around to mimic antennae, bobbing up and down as if searching for pheromone signals, and walking in a zig-zag pattern.

These strategies are especially effective against larger predators who rely on visual clues, such as wasps or birds, and who may not like the taste of ants.

There are various terms used to differentiate the ways that mimicry can be employed.

This is the term that describes a spider making use of its resemblance to ants to avoid being attacked by potential predators, sometimes including the ants themselves.

For example, jumping spiders mimic both the body shape and the movements of ants. This is mainly a defensive behaviour, but can also be used to catch prey off-guard and make it easier to hunt.

Wasmannian mimicry occurs when two species live close to one another.

The spider will mimic various features of the ants either with its appearance or by using chemicals.

One example is the Slender Ant-Mimicking Jumping Spider, which attacks vulnerable young ants to adopt their odor and deter predators.

Another would be the Red Weaver Ant-Mimicking Spider which is typically found in trees and bushes close to the nests of weaver ants.

Aggressive mimicry is used by spiders to enable them to approach ants and prey on them successfully. Although they may not visually appear very ant-like many jumping spiders can get close enough to leap and attack without putting themselves in peril.

Some spiders employ more than one type of mimicry. For example, the Variegated Ant-mimic Sac Spider employs Batesian and Wasmannian mimicry.

Of the many species of spiders that resemble ants, these are some of the most common.

This jumping spider is one of the few found outside tropical regions, and there are many varieties. Around 6mm in length, they resemble wood ants.

They’re most active in the USA in the warmer months and can be found in buildings as well as in open areas.

But how do spiders jump such great distances relative to their body size? Unlike grasshoppers which use powerful leg muscles to help them leap, jumping spiders propel themselves by suddenly increasing the blood flow into their legs.

This causes the legs to extend and enables them to fly as much as 50 times their own body length, to ambush unsuspecting prey.

Because of this ability jumping spiders don’t need to trap prey using a web. They're active stalkers and hunters. 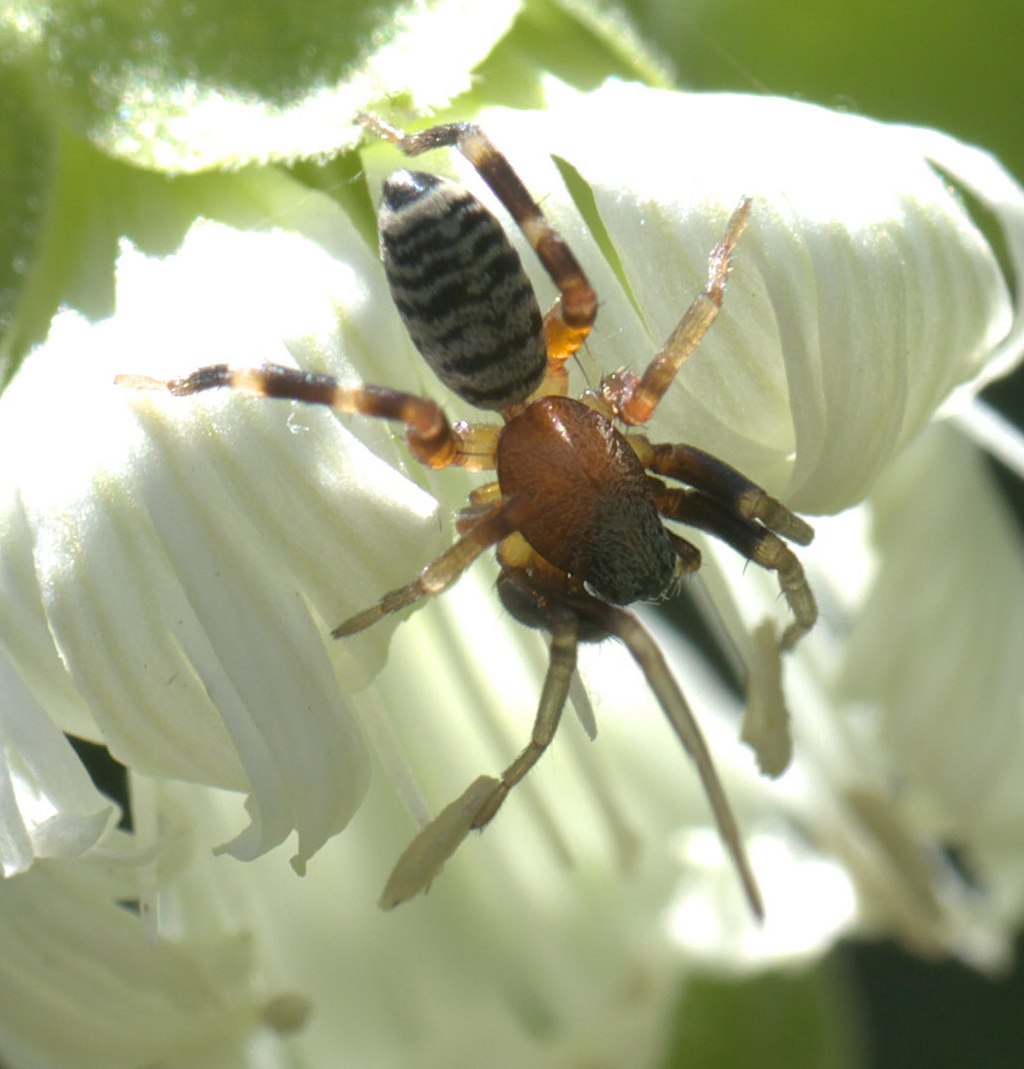 This timid and beautiful species can be found in North and Central America.

Their body length is typically 7 to 9 mm, the females being somewhat larger. Their exoskeleton varies from reddish-brown to almost black and is covered with slender white hairs.

It has to be said they’re not the best at ant mimicry – they definitely look more like spiders. However, their behavior and movement imitate that of ants - they wave their front legs like antennae, bob their abdomens up and down, and move in zig-zags.

They don’t prey on ants but do live near them, as this is likely to confuse and deter predators. 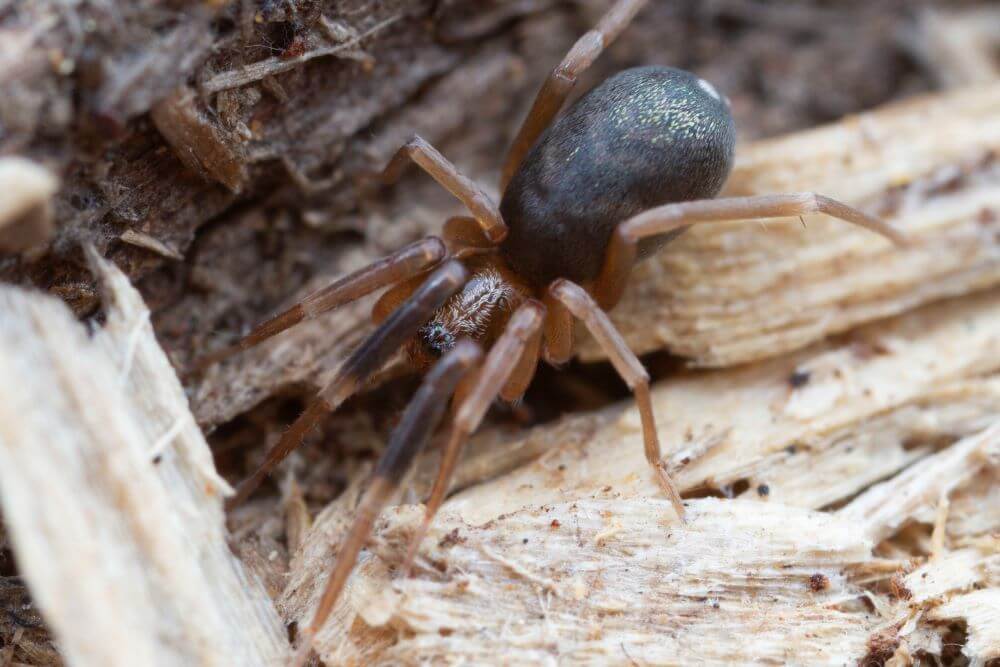 Found in the USA, this is another ant-mimic that physically resembles a spider far more than an ant, so relies on behaving like an ant.

It ranges in color from metallic black to mid-brown, with an enlarged oval abdomen. 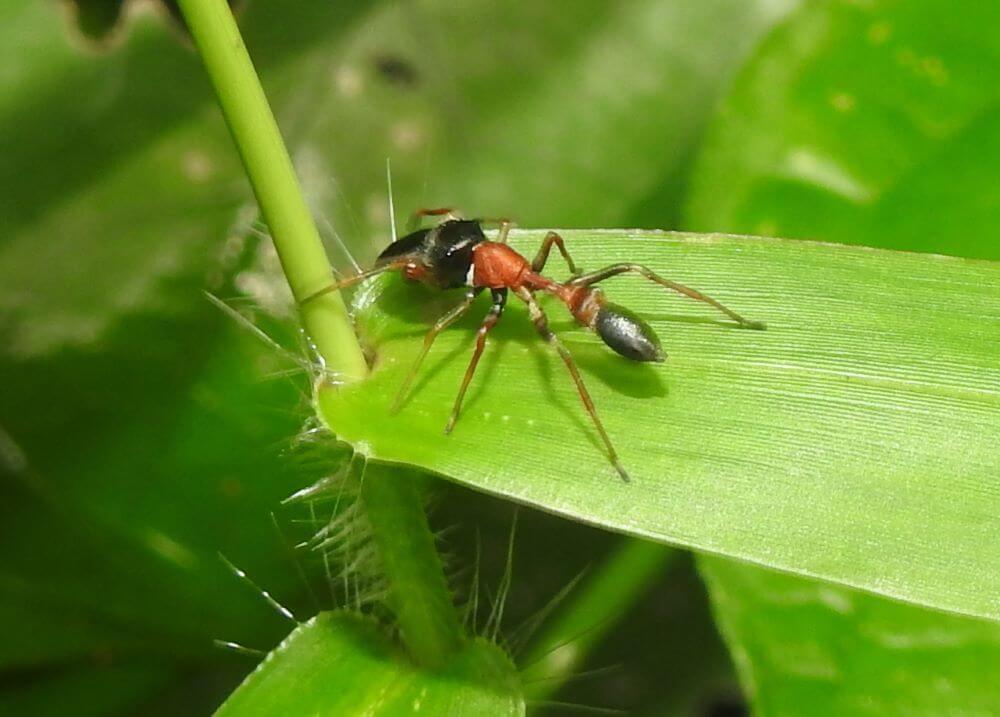 A truly spectacular species, it doesn’t appear to resemble ants very closely, but given its ability to propel itself from a distance onto a lone ant, this is not much of a disadvantage in terms of hunting. It may look enough like an ant to deter larger predators. 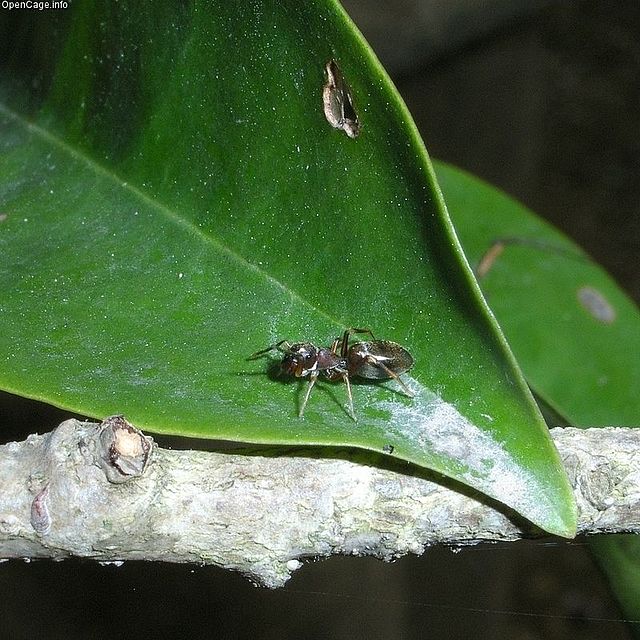 This spider has an extremely ant-like appearance: its thorax has adapted to make it seem that the body is divided into three segments. It also has huge forward-facing eyes which indicate that it is a jumping spider.

Their remarkable binocular vision is used to locate, stalk, and then ambush their prey.

These spiders don’t resemble ants in appearance very closely, but their behavioral mimicry may be sufficient to confuse the ants they prey on.

They can look very different according to their sex and life stage.

They will always have a black abdomen marked with four lateral grey or white stripes. The head may be black, brown, or almost white. In adults, the two front leg pairs are shaded, from black near the body to brown towards the end.

They are relatively small - adult females can reach 1/2 in (13 mm), while males and juveniles are much smaller at between 3 mm to 6 mm. 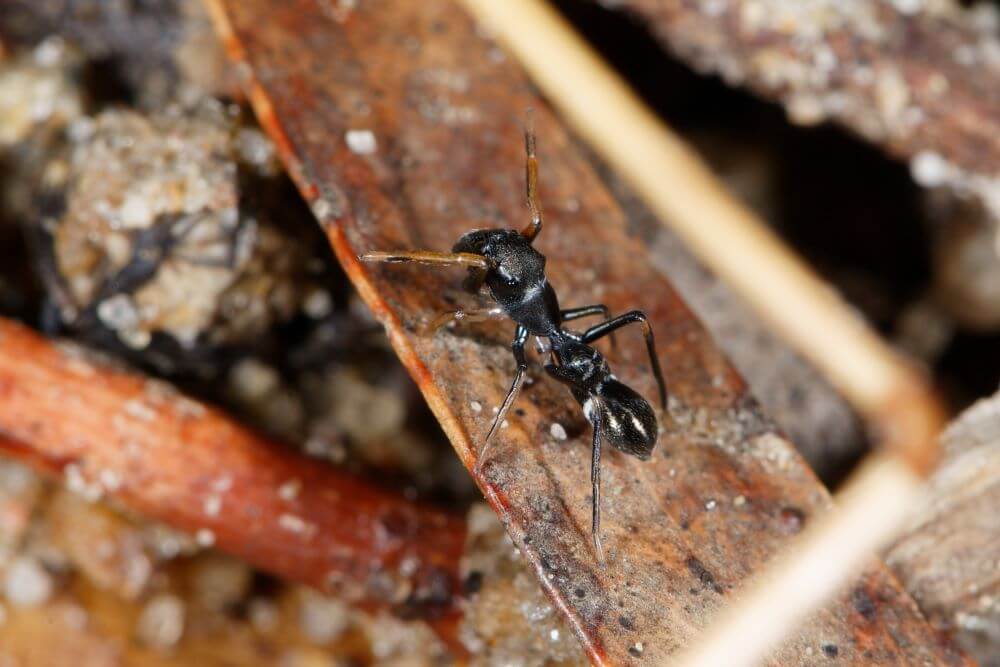 Found in New South Wales, Australia, this is another jumping spider.

With an elongated body that could be confused with an ant to deter predators, it also has distinctive variegated markings on its abdomen. The two large black spots could be mistaken for eyes by birds and other flying hunters. 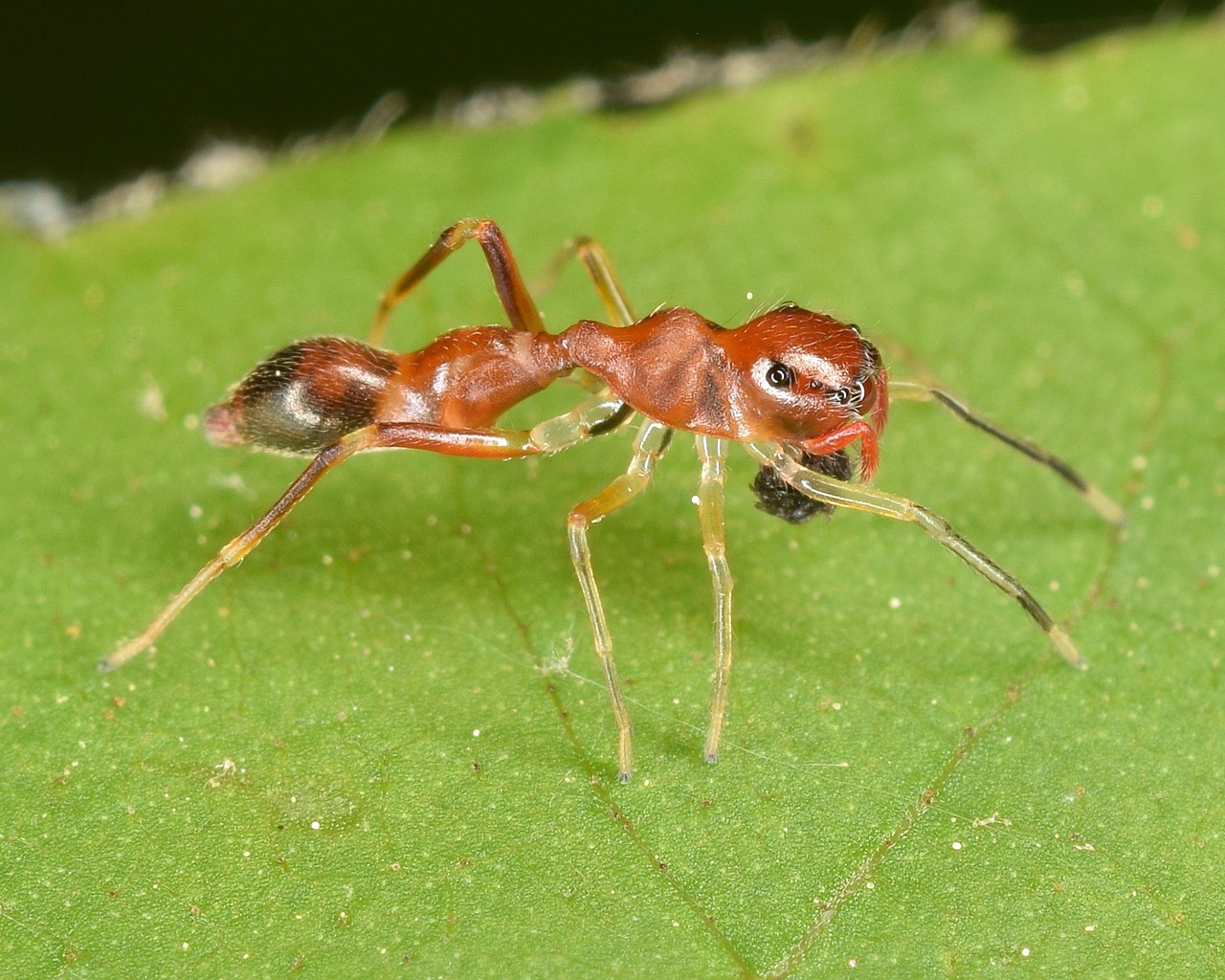 Interestingly the slender ant-mimicking jumping spider is preyed upon by ants, yet it will build its next close to an ant nest.

The construction will be such that ants cannot penetrate it – while the odor of the ant nest keeps other predators, such as mantises, larger ants, and other spiders, away.

The spider derives its name from its constricted abdomen, which has evolved to resemble ants. Dark specimens have white marks, and lighter specimens have paler markings. 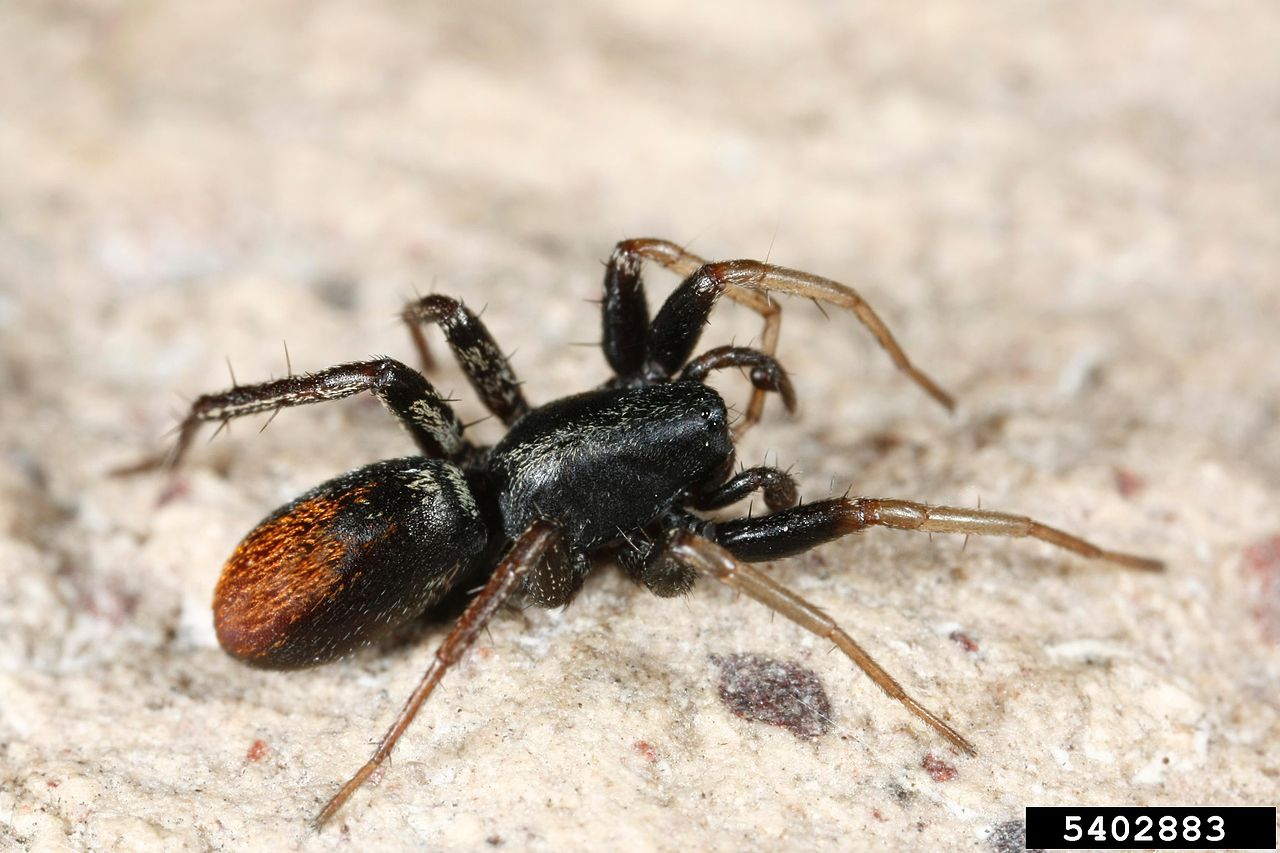 This spider is sometimes confused with certain species of the Black Widow, as it is black and hairless with red markings on its back.

However, it is rarely aggressive towards humans, preferring to target insects, ants, or in some cases, pets.

If it does bite, this is painful but not considered dangerous to humans (unless they have a specific allergy, in which case, medical attention should be sought).

This spider mimics the behavior of ants, walking on 6 of its 8 legs and waving the front pair in the air like antennae. The female grows to 13mm, while the male is smaller. 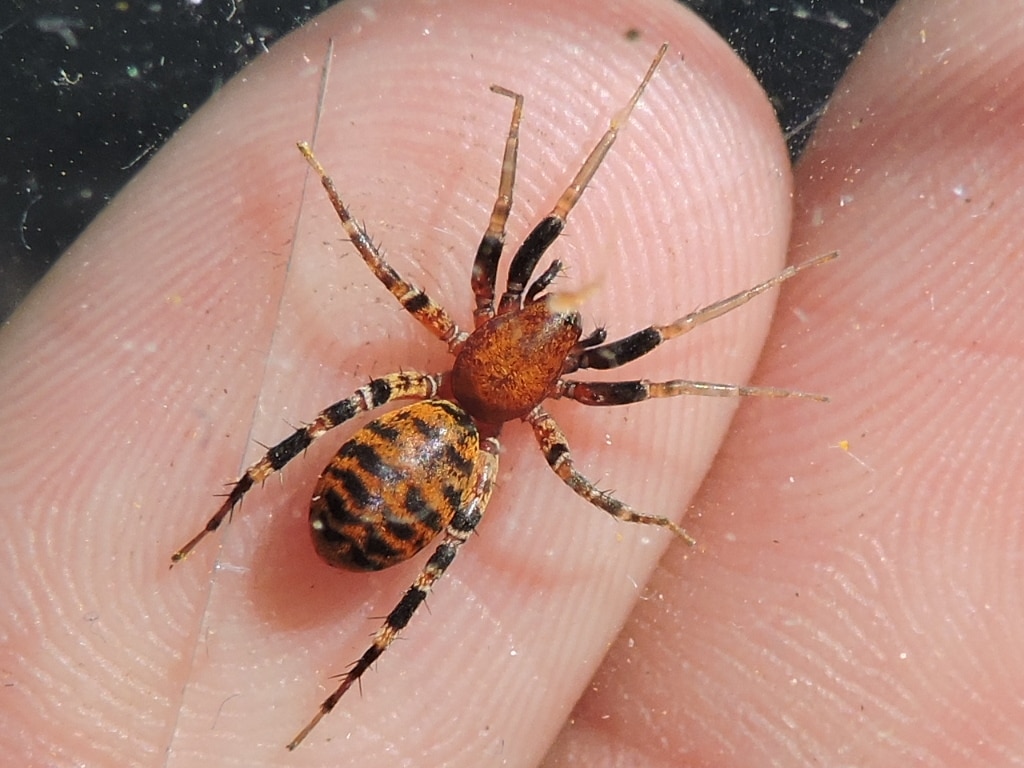 These spectacular spiders are believed to mimic velvet ants (mutillidae) which are not true ants but brightly colored wingless wasps, with extremely powerful and painful stings.

By imitating these much more dangerous creatures, Orange Ant-mimic Sac Spiders gain an advantage and so remain safe from cautious predators. 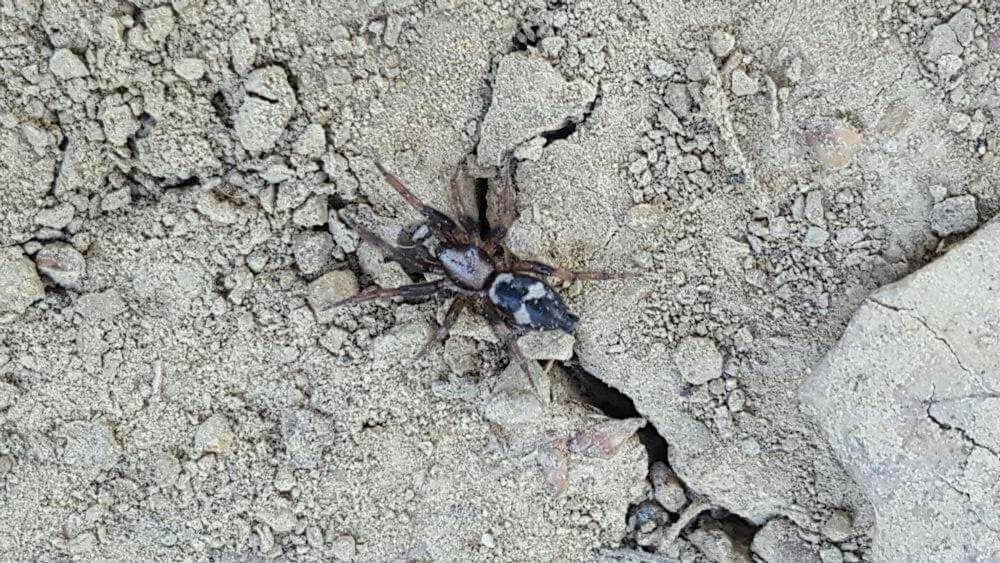 Another brightly patterned spider, which is also thought to be mimicking velvet ants, rather than true ants, as these deter many predators.

While they are fairly nomadic, they do build nests for their eggs, and to overwinter. They don’t use webs to capture prey but are active hunters. 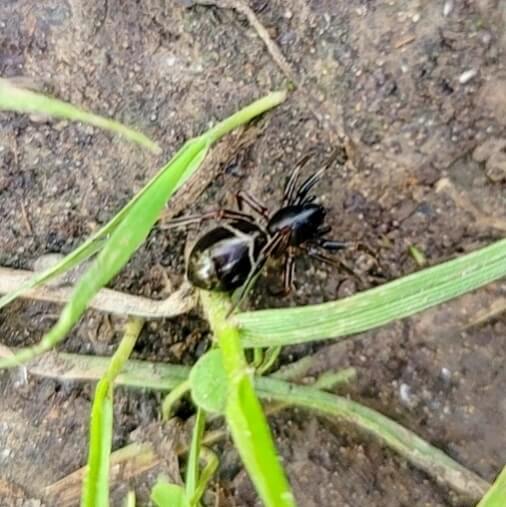 With a dark, elongated body to closely resemble that of an ant, this spider can be identified by two light-colored strips across the top of its abdomen

This jumping spider with an elongated body mimics the Asian weaver ant (Oecophylla smaragdina) in behavior.

However, unlike weaver ants, the Red Weaver spider is timid and doesn’t bite humans.

The front legs of the female resemble the antennae of an ant, while those of the male look like a large ant, transporting a smaller one.

They live in trees and bushes close to ants’ nests and gain protection from predators.

They also use the ant brood as a way to absorb the odor of the nest. However, they rarely attack ants directly, preferring to hide under a thin web on a leaf, and wait to ambush them.

As the name suggests, Crab spiders move sideways. They move slowly, preferring to wait for prey to land in front of them rather than to go hunting actively.

Their front two pairs of legs are longer and heavier than the others and are equipped with spines for gripping their prey.

When resting, it doesn’t look at all like an ant at all, but when it’s hunting, it mimics the typical movements of a dying ant, thereby attracting the attention of nearby workers and increasing its chances of grabbing an unsuspecting victim.

Two large black dots on their abdomen resemble the eyes of the weaver ant, especially when approached from behind.

They live in trees, close to weaver ant nests. When it catches an ant in its jaws, it allows itself to fall, using a silk strand as a safety line. The ant is helpless, and can only wait for the venom to take effect.

These often astonishing ant-mimicking adaptations have evolved over hundreds of millions of years to give spiders an advantage in the battle for survival.

It’s a powerful tool in the armory of weapons, including silk spinning, jumping, and injection of venom these fearsome predators have at their disposal.

Next time you find yourself observing an unusual-looking ant, take a closer look and you may well find that you've come across an ant-mimicking spider. Examine it closely and prepare to be fascinated.