There are 12 gecko species you can find throughout Florida, only one of them is native with eleven being invasive species.

The good news is that they are not venomous. In fact, geckos pose no threat to humans or pets.

They are docile, but if your pet attacks them, they will bite, which can pierce the skin with some of the larger gecko species.

It’s important to bear in mind that geckos often carry Salmonella, which can cause illness.

Therefore if you do find a gecko in your home and you or a family member has touched it or handled it, it’s recommended to wash your hands thoroughly to reduce the risk of infection.

The reef gecko (Sphaerodactylus notatus) is a small gecko with a round body and large scales on its back that overlaps.

They grow to around 2.25inches (5.7cm) in total length, including the tail, which is covered in darker spots on a brown body.

Females have three broad stripes on the head.

This is the only native gecko to Florida.

They are active at dusk, often seen rushing to hide in debris or find cover. 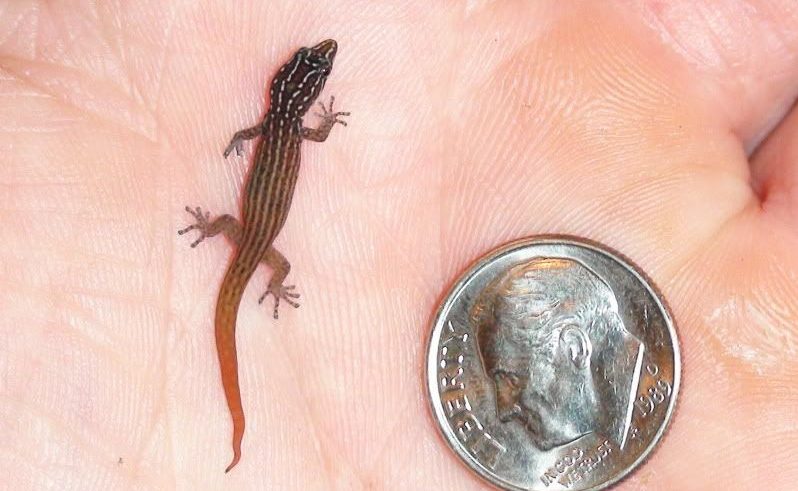 This is a matchstick-sized lizard which grow up to 2.5 inches (6cm) in total body length.

They are brown to olive-brown in color with tiny spots of white at the base of their necks, sometimes they turn into thin lines. In some cases, these geckos may have no pattern.

This small gecko lives among leaf litter and debris.

This is a large gecko growing up to six inches (15cm) including its tail.

They have large scales covering their backs in gray to tan with four distinct white spots on the shoulders and white bellies.

These geckos come from North Africa and have been introduced to several Florida locations over the years.

They are seen on the walls of the building.

Note they are not as shy as other geckos and they will bite and squeak if caught. Their bite can pierce the skin, ensure you clean it properly to reduce the risk of Salmonella infection.

These geckos (Hemidactylus platyurus) have long snouts with a concave head and small ear openings. They have granule-like scales on their bodies with fat, flat tails.

They are often gray in color with some dark gray streaks from one eye to the shoulder. Their bellies are white.

The total body length of the fat-tailed house gecko, including the tail, is around 6cm.

They can be found in numerous countries around the world and have also been introduced to Florida.

The Ashy gecko (Sphaerodactylus elegans) comes from Cuba and is the largest dwarf gecko found in North America, reaching a total length of 2.75 inches (7cm).

They have tiny black and white spots over the body, tail, and legs with a dark brown to gray background. They are often paler in color at night.

Juveniles have cross bands in black on their heads and body, which are more green than gray with red coloration to their tails.

These geckos have been recorded in Florida Keys since the early 1920’s.

The ashy gecko can be found on walls and in trees, where they hunt for food.  They are active at night. 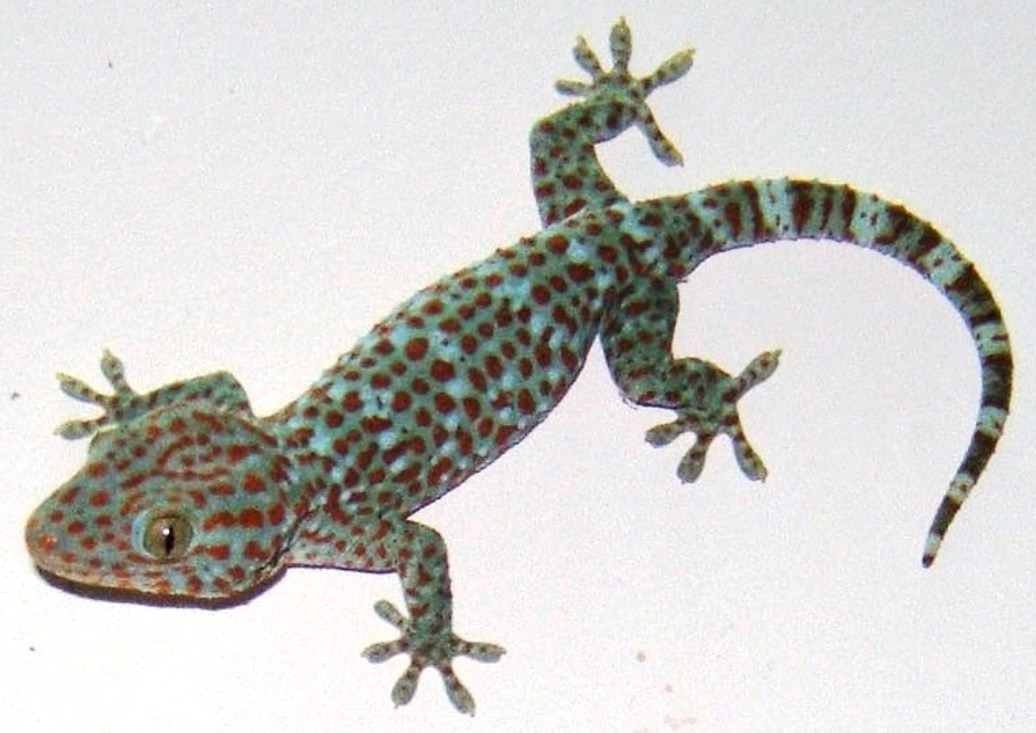 The Tokay gecko (Gekko gecko) comes from India and Southeast Asia and has been introduced to Florida.

They are native to rainforest’s, living in trees and rocky outcrops, adapting to rural human areas.

Female Tokay geckos tend to be duller than males.

They are large and can grow up to twelve inches (30cm) including their tails. They are the third largest gecko species with a flattened body and soft skin that is gray with red spots.

They can change their color to blend in with their environment.

They are territorial and aggressive and will bite if captured or if females are protecting eggs.

The Mediterranean house gecko (Hemidactylus turcicus) has a rounded snout, concave forehead, and oval ear openings. The head has large granular scales, white the body is covered in tiny granules.

They have a cylindrical tail, which is slightly flattened.

This gecko is gray to brown in color with darker spots and a translucent belly.

They are nocturnal and often seen at night, rushing into the darkness when trying to get away.

They can be found on their own or in small groups.

These geckos can break their tails to escape with the tail regrowing.

The tropical house gecko (Hemidactylus mabouia) grows to a size of around five inches (12.7cm) from snout to vent with females being slightly larger than the males.

They are medium-sized geckos with slender bodies, flat heads, and large eyes.

Their bodies look like they are covered with small warts in a brown, gray, or pinky color with four chevron type markings, which tend to fade in the light.

Their tails comprise of between ten to twenty darker bars.

They are darker during the day than at night.

These nocturnal geckos take advantage of light sources outside and inside the home, hunting insects that have been attracted to the light.

They are excellent climbers and can be aggressive if caught.

This gecko can grow up to eight inches (20cm) in total length, including its tail.

It is heavier than most other geckos with females being smaller than the male.

They are brown with beaded patterns and black crossbars. Males have white dots. Their belly is very light brown to white.

They are great climbers, but also spend time on the ground with males being very territorial and aggressive with other males of the same species. 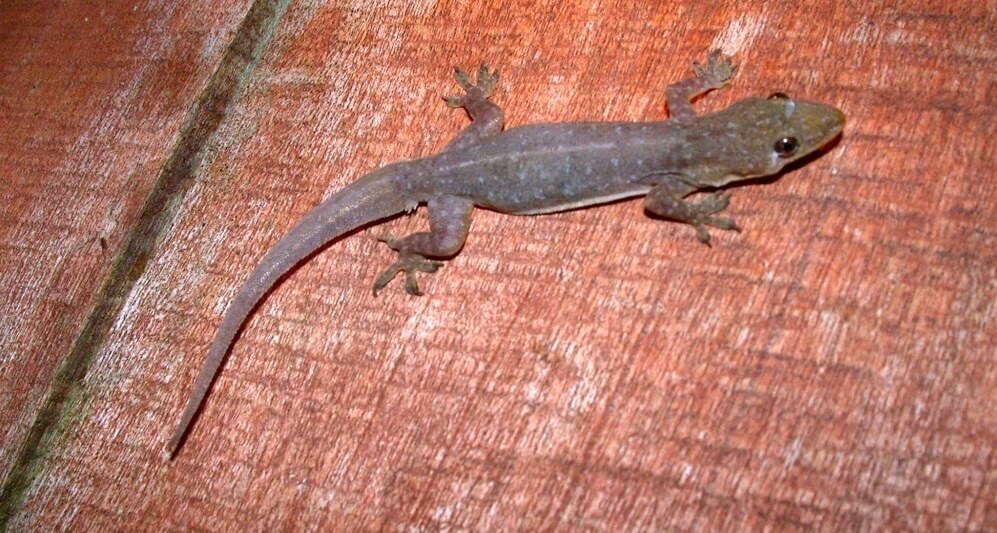 The Indo-Pacific gecko (Hemidactylus garnotii) has a flat tail and enlarges spiny scales on the edge of its tails.

They are a gray color with dark markings and a yellow to orange underside. At night their bodies appear translucent.

They have a long thin snout and they can grow to fourteen centimeters (5.5 inches) in total length, including the tail.

These geckos are often seen in southern Florida with some scattered locations in the panhandle and northern Florida.

They are nocturnal, hunting and feeding on insects. During the day, they hide in loose leaf litter and tree bark, along with crevices in buildings and homes.

They are often seen hiding on the underside of branches.

Females tend to be gray in color with a light collar.

They have a white tip to their tails with hatchlings being banded yellow on a gray body.

They can grow up to 3.5 inches (9cm) in total length, including the tail.

These geckos were introduced to Florida Keys and can now be found in many other US locations, often hiding in rubble or on buildings.

The male uses his yellow head to defend his territory and attract a female.

They do not have a voice, unlike other gecko species.

They are very active on the ground and can be found on low branches and tree trunks.

The Madagascar giant day gecko (Phelsuma grandis) is a large gecko that can grow up to around 12 inches (30cm) including its tail.

They are bright green, sometimes a blue/green with a red stripe that runs from the nostril to the eye. They have red dots or bars on their backs, which can be absent in some geckos.

Adults sometimes have large calcium sacks on their necks.

Younger geckos have brighter red markings than adults, which do fade with age.

Their bellies tend to be a creamy white to very pale yellow.

If they feel threatened, the colors will change and the gecko will turn dark green with red markings seen on the face with orange on their backs.