Cuban tree frogs are invasive to the United States, causing serious damage to ecosystems, not to mention the damage they can cause in your home. If you think you have Cuban tree frogs in your backyard, then you are going to know how to identify them and how to get rid of them humanely. Continue reading for detailed information on Cuban tree frog control methods.

Why Are Cuban Tree Frogs An Invasive Species?

Cuban tree frogs are invasive in Florida, United States, along with other tropical areas. They have caused damage to native ecosystems and for residents. They eat other frogs, lizards, and snakes. They are mostly located in the city, where they hang on walls, near lights, windows, and in plants. They leave stains on windows and walls. They will reproduce in your pond.

How Did Cuban Tree Frog Get To Florida And Other States?

These frogs are native to the Bahamas, Cuba, and the Cayman Islands. They are large frogs which have also been introduced to the US Virgin Islands, British Virgin Islands, and Puerto Rico. They were first discovered in the US in the 1930s, believed to have arrived on cargo ships circa 1800s. They survive in most habitats, including brackish water. They are now established in southern Florida, and as far as South Carolina.

These frogs have the knack of getting onto shipments of potted plants, vegetation packaging, on boats and motorized vehicles. When they arrive in a new location, they become invasive. They have excellent colonizing traits, including a short generation time, diverse diet, coexist with humans, and more. They secrete toxic mucus from their skin, which limits their predator list considerably.

They live in a wide variety of habitats from low-density suburban developments to estuaries, towns, agricultural areas, lowland forests, swamps, and more. They can be located in shady areas that are damp and have ample trees and shrubs to hide. They do prefer areas where the temperature never drops below ten degrees Celsius. 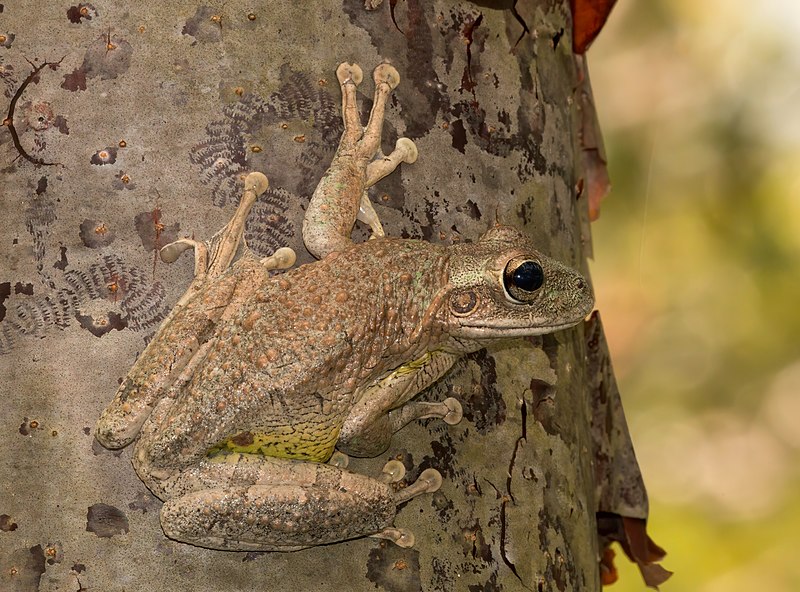 The Cuban tree frog is not easy to identify. These invasive frogs can be a host of colors ranging from brown to green, gray, and white. They also change colors based on the substrate they are on. Some have dark patches on their backs, some are solid color without any pattern.

These are the largest of all the tree frogs found in North America and they can grow up to 12.7 centimeters or 5.5 inches. They tend to have more green in their coloration as adults. Their wart-like skin can change color to camouflage themselves. They have bright yellow inner thighs, which can be seen when they jump.

The Cuban tree frog can be found in agricultural, urban, natural, and suburban areas. They are invasive wherever they go.

Because these frogs are comfortable in urban areas, they also cause problems in the home and office, by making their way through windows, doors and through plumbing. They tend to clog drains, reproduce in ponds and pools increasing the number of spaces in the area. They tend to occupy bird nesting boxes. They also tend to cause serious problems with electrical systems, as they get into the transformers, causing many electrical issues.

Because they are so invasive and cause such a problem with the local environment, it has been recommended that the Cuban tree frog be captured and humanely euthanized. They do not appreciate very cold temperatures, which makes cold one of the most humane ways to rid yourself of these invasive frogs. The minute the temperatures are comfortable, they will increase in number. These frogs continue to move north, disrupting natural ecosystems in their path.

There are a number of control methods you can use to rid yourself of Cuban tree frogs. Note that having a cat or dog, placing rubber snakes in ponds and pools and even pesticides and chlorine will not get rid of them, they will just keep returning.

Freezing a Cuban tree frog is probably the most humane way to eradicate them. Frogs go into hibernation when the weather gets too cold. Placing the frog in a ziplock bag and placing it in the refrigerator and then the freezer a few hours later, will freeze them, putting them into hibernation. When killing them, they will feel no pain and will already be asleep.

It's a fact that a frog will die if it's dehydrated. Salt leads to dehydration. Simply mix salt and water and spray the frog directly and around the area where they live. Watch that you don't spray your plants, as they will turn brown and die.

Mix 1.3 pounds dry citric acid with a gallon of water, spraying directly onto the frog for fast and humane eradication of this invasive frog pest.

Stop the problem before it starts by looking for frog eggs in the water. Cuban tree frog eggs clump together, making it easier for you to scoop them out. Leave them in the sun to dry before you throw them away.

If you have Cuban tree frogs in your yard, then chances are that you have some form of water features that are attracting them, such as a pond or a pool. Drain the pond or pool and try leaving it dry for a few weeks to see if this removes the frogs from your space. Be sure to trim back any plants near the pond or pool, along with any weeds. Do not leave water out for birds and other animals. Ensure you work to make your yard unattractive to frogs.

Frogs need to eat. They also need plenty of plants and a water source. There must be something in your yard that has them staying. Getting rid of the food supply is an effective way to remove the frogs without having to kill them. Remove the food source and they will head off to find another food source. This can be done by turning off outside lights that attract bugs, use mild insecticides to eradicate bugs, which attract frogs. Don't leave your pet’s food outside. Remove a water source if you are dealing with noisy frogs.

Scoop up any tadpoles you find in your pond or pool and leave them in the sun to dry out. They die as they dry. This will reduce the risk of the Cuban tree frog being able to successfully continue breeding in your yard, which can reduce the number of these frogs invading your local area.
Previous Post Lizards in Washington State Next Post Veiled Chameleon Growth Chart And Developmental Stages