A happy ball python is a healthy pet, when stress creeps in, there are numerous health disadvantages from a lowered immune system, making your python susceptible to illness along with lack of appetite.

Knowing the signs of a stressed or happy snake can also make your handling experiences more enjoyable, helping you identify when you can and when you shouldn’t pick up your pet.

There are numerous signs that will tell you when your pet is relaxed and happy when it’s safe to pick it up without it getting stressed.

Remember a ball python is not a cuddly pet and should be handled with care.

One of the signs of a happy ball python is when it’s calmly flicking its tongue every now and then.

It will flick its tongue into the air, taking chemical samples to supplement its sense of smell. It will sometimes like objects, getting a better sense of its surroundings.

This is how your pet would normally explore its environment in the wild. 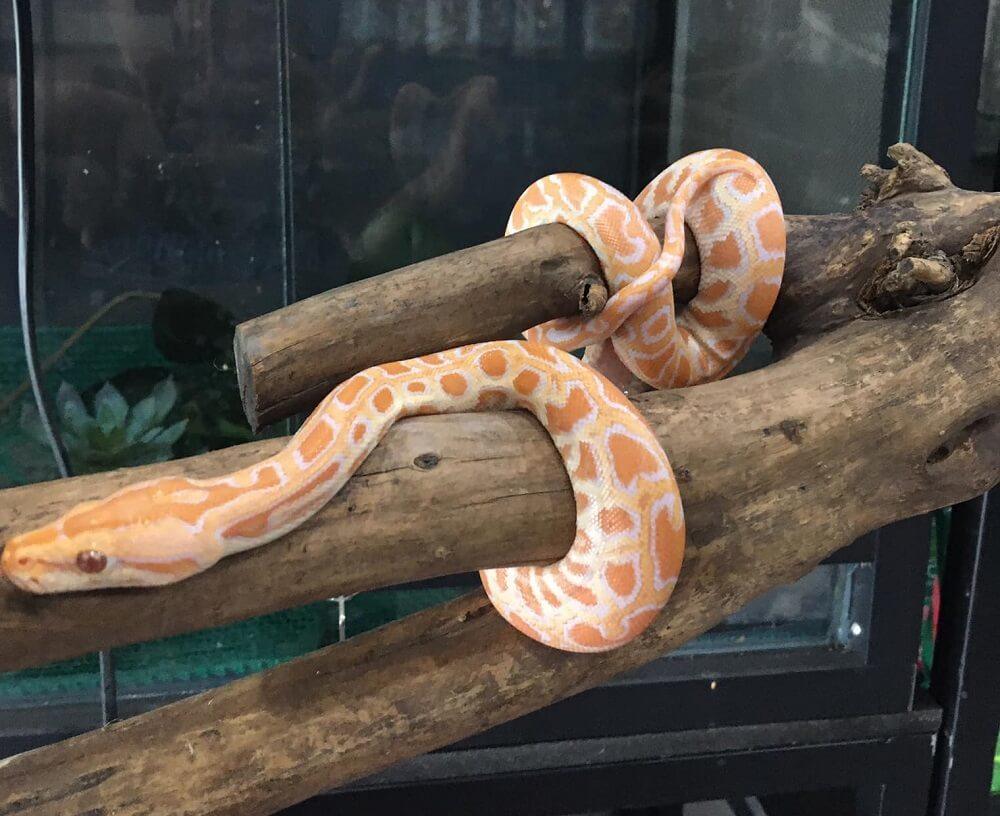 A ball python hanging on a branch

Watching a snake comfortable with its surroundings, you will see it slowly move around its enclosure, exploring. It’s slow, it’s relaxed and there is no rush to it.

Ball pythons can almost appear lazy in the way they explore their enclosure.

You may see your python stretched out on a branch or literally hanging from a branch, this is a definite sign your pet is relaxed and happy. 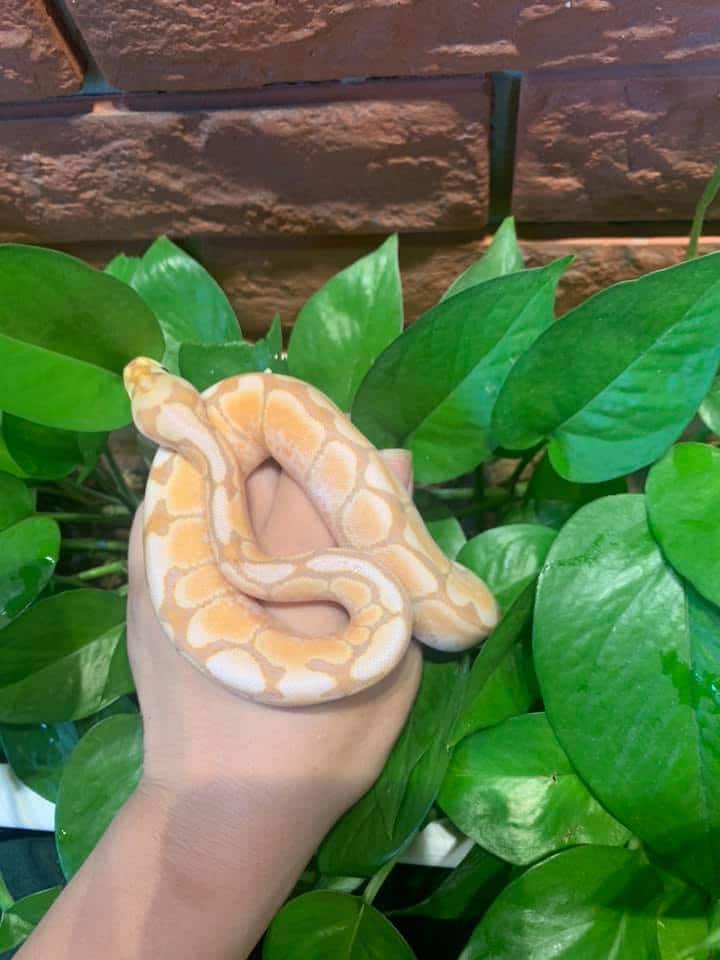 When you handle a ball python that knows you and is comfortable with you, it will have a gentle grip around your arm.

It should not be tight. Even though the grip may be firm, it should be for stability.

If it squeezes too hard, then it is not as comfortable as you thought. Your pet should slowly and comfortably explore your hands and arms when you handle it, using you as a jungle gym.

Once you have had your ball python for a while, you will get to know its normal behavior.

You will learn its breathing, how often it explores the enclosure and you will learn the tell-tale signs that your pet is happy and relaxed.

Every ball python is different, they have their own unique habits, which you will soon learn which are associate with happiness and comfort.

A stressed ball pythons body language will differ from its normal behavior. It’s not uncommon for a stressed python to stop eating, even hissing at you when you approach the enclosure.

Stress can be dangerous for your pet’s overall health, which is why you want to identify stress signals, reducing handling during that time, while trying to make your pet as comfortable as possible.

Stress in ball pythons can be broken down into moderate and severe stress.

When moderate you should reassess before handling your pet or putting your hand in its enclosure.

When your pet has severe stress, it’s best to be left alone.

Moderate stress could be based on a number of factors and is not considered bad stress.

These behaviors are often seen when a python has been returned to a cleaned and disinfected enclosure, or you have added new accessories.

It’s important when you see moderate stress signs in your pet that you stop what you are doing and identify what may have caused the behavior.

If you are handling your pet or you place your pet in a clean enclosure and it wraps itself around an object firmly without it being prey, this could indicate stress.

Pythons will also force themselves into a small hide, which is also a sign of stress.

If your pet is outside the enclosure and gripping firmly to your arm, squeezing, then this is a sign it had enough or it’s simply not in the mood to be handled. 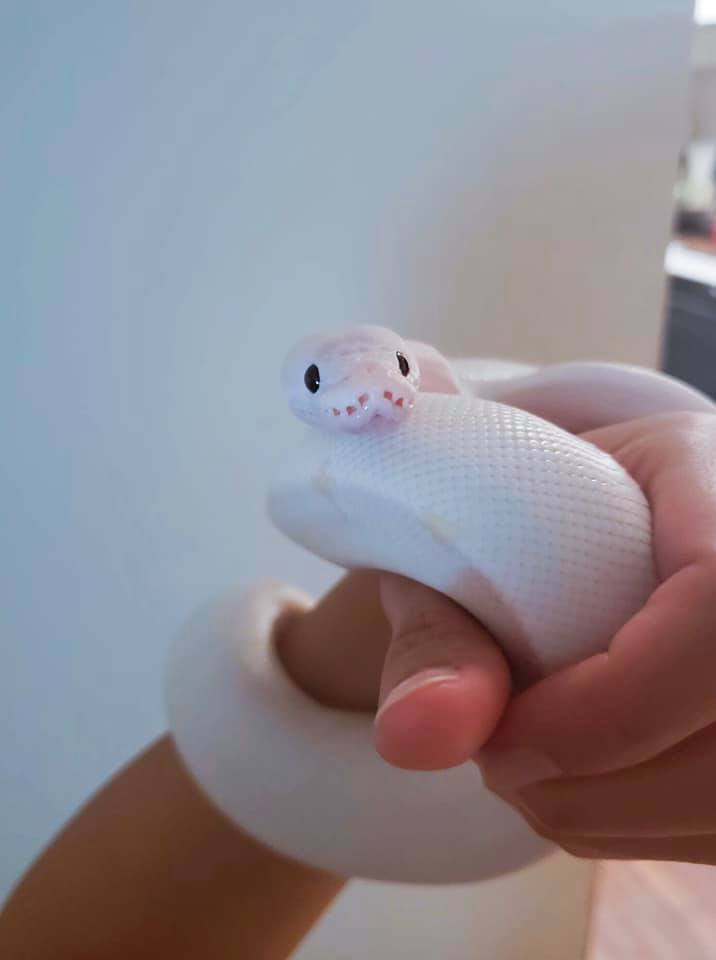 Don’t handle when you see signs of stress

When a python becomes hyperactive, constantly moving around the sides of the enclosure and pacing, it’s a sign of stress, but it doesn’t have to be bad.

It’s not uncommon for python owners to see their pet trying to lift the lid of the enclosure with their nose, rubbing the sides of the enclosure, and pacing when their pet is used to a set schedule, which includes a feeding and handling schedule.

They are clever and will get to know their schedule.

This could be a sign that they are expecting food or to get out of the enclosure for some exercise.

When your ball python freezes, lying and staring at something, then it is taking its surroundings into consideration, deciding whether it is safe or not.

This is not uncommon and is good stress.

No Flicking of the Tongue

A happy and relaxed ball python will flick its tongue into the air calmly as it moves around.

When they stop flicking their tongue, combined with other signs of stress, it could mean that your pet’s stress levels are rising.

If your ball python starts to flinch or jerk away when you touch it, it is a sign of stress. This is often noticed in conjunction with other signs of stress.

A ball python that has its head or the upper third of its body raised, doesn’t have to mean stress.

Sometimes it can just be an exploration movement, but on the other hand, it could mean worse.

If your pet raises its head and stiffens its posture and starts focusing intently on something, then it could mean something is increasing its stress.

It’s best to stop what you are doing and allow the snake to return to a relaxed and comfortable state. Ball pythons are known to make an S curve or slightly coiled posture as a stress signal.

Severe stress is when you want to stop what you are doing immediately to reduce additional stress on your pet and the risk of you being bitten.

This stress is often an indication that your pet has encountered something that they feel is scary or threatening.

If you have your pet outside its enclosure, now is the time to put it back safely, allowing it to calm down and relax.

A ball python that refuses to eat is going through serious and ongoing stress. This could be due to a move to a new enclosure or a new home.

It could also be a result of incorrect temperature and humidity levels, unhygienic living conditions, or its enclosure being in a high traffic area.

It’s not uncommon for ball pythons to urinate on their owners.

In fact, some pets simply don’t enjoy urinating in their own enclosures, so they relieve themselves the minute they are removed.

Stress urination and defecation are different than when your pet wants to relieve itself. This is often associated with other stress signs, such as flinching.

Ball pythons will wag their tail when breeding or feeding, but high arousal can also lead to stress.

When you see tail wagging when you are not feeding and it’s not breeding season, then this shows a very stressed pet.

Attempts to Get Away

When a stressed ball python is being handled, it flinches and jerks. This can also be seen in the enclosure.

Your pet may start pacing fast around the enclosure, moving around the perimeter at high speeds, or tightening its grip on anything.

This behavior quickly escalates to urinating, defecating, and hissing.

It’s not uncommon for a ball python to breathe heavily after doing some mild exertion, but the heavy breathing will quickly return to normal.

When you see your pet is breathing heavily for long periods, this is a clear sign that it is stressed.

Any ball python that hisses and bites is scared and stressed. If your pet is acting this way, return it to the enclosure immediately, do not force it to be handled any longer.

If you continue handling you will cause your pet to have a negative association with handling.

If your ball python starts striking at you, anyone else, or anything in its environment that isn’t prey, then it is very stressed.

This is a defensive behavior used in snakes that are feeling threatened.

If this is a consistent and repeated behavior, then you will want to identify the cause, make necessary changes and try and get your pet to relax.

You want what is best for your ball python and by reducing stress, you can provide your pet with a comfortable and happy life.

There are numerous causes of stress to take into consideration such as a small enclosure, no hiding places, incorrect temperatures and humidity, a dirty enclosure, an ill pet, or incorrect handling.

Get to know your pet, give it time to settle into its new home before you try and handle it, and remember the signs of stress, so you can return your ball python to its enclosure to help it calm down and relax.