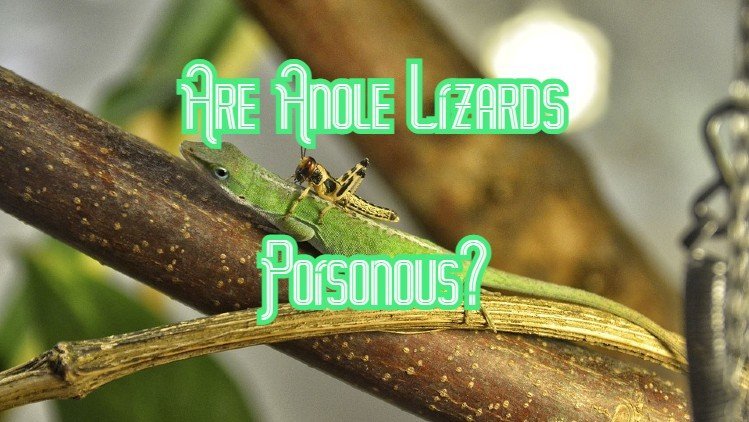 There are 8 species of anole lizards in North America. Maybe you've rescued one that was injured in your back yard or your dog or cat came home with one as a gift for you. If you are worried if the anole lizards in the US are poisonous, then continue reading for detailed information on these lizards and how they can impact you and your pets without taking careful precautions when handling them.

Are Anole Lizards Poisonous To Humans, Dogs, Or Cats?

Poisonous lizards release dangerous toxins once eaten. The good news is that the anole lizard is not poisonous to humans, but they do carry a host of diseases, which means you want to take careful preventative measures after handling. Even when your pet decides to eat an anole lizard, there is no poison released.

These lizards are not poisonous to humans, dogs, or cats.

Venomous means that the lizard would bite or sting you or your pet in order to release toxins. The anole lizard is not venomous.

Don't be fooled by their small size, they will try and bite if cornered. Anole’s bites are not painful and the teeth very rarely break the skin.

These lizards are not venomous.

Anoles do tend to carry disease, which can be easily avoided with proper hygiene in humans. They carry salmonella bacteria, which is one of the most common reptile to human diseases.

When it comes to pets, the anole can be easy for a dog or cat to catch and possibly even eat. While they are not poisonous, they do carry diseases, including liver fluke in cats. This is a parasitic liver fluke that some lizards have and is most common in the southern US and Hawaii. While it doesn't harm the lizard, it can be harmful to your cat, impacting its liver, gall bladder, and bile ducts. It can take 12 weeks to mature and cause problems, which can include liver inflammation, which can be fatal. Symptoms include diarrhea, lethargy, vomiting, weight loss, yellow eyes and skin, and loss of appetite.

Then there is the risk of salmonella for your dog or cat, whether they have bitten or eaten the anole. Some lizards can harbor salmonella bacteria, which can make your pet sick. It causes inflection in dogs and cats, no matter how healthy they are. Lethargy, vomiting, and bloody diarrhea are the symptoms to watch for.

What Lizards are Poisonous?

Should you or someone you know be bitten by a Gila monster or Mexican beaded lizard you will experience numerous symptoms including bleeding, burning and throbbing pain, swelling, teeth in the wound, weakness, nausea, and much more.

Anole lizards make great pets and are popular in homes throughout the United States. The good news is that they are not poisonous or venomous and with the right hygiene, the risk of catching a disease is limited. If your pet has eaten or bitten an anole, watch for symptoms of salmonella and flukes of cats.
Previous Post Tree Frogs In Michigan Next Post 8 Popular Pet Anole Lizards