There are 13 scorpions you may come across in Nevada, whether they have made their way into your home or you see them out in the wild.

Knowing the scorpions in Nevada and their behavior and venom can help you quickly identify how to deal with one when you come across it.

Continue reading below for detailed information on the scorpions of Nevada, when and where to find them, along with essential preventative measures.

Are Scorpions In Nevada Dangerous?

The majority of scorpion stings in Nevada are not considered medical emergencies, though the sting can cause pain, swelling, and redness.

The intensity of the sting varies on the scorpion, some can result in an allergic reaction, which includes trouble breathing, facial and throat swelling.

The Arizona bark scorpion is the most dangerous in Nevada with a legal sting to pets, children, and the elderly.

Luckily, they are not keen on attacking and will only sting when they feel threatened. Mostly, children under ten are affected.

Types Of Scorpions In Nevada

The 13 scorpions you may see in Nevada include: 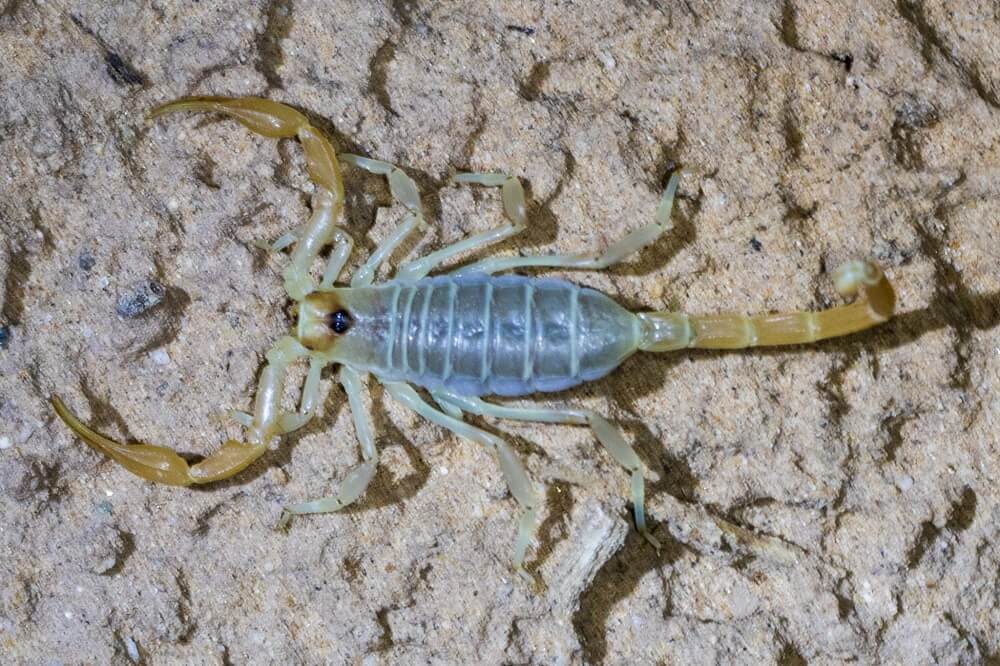 The Beck's desert scorpion is a light tan, which helps it blend into its sandy surroundings.

It can be identified by the number of white lines running across its back.

There have been very few observations of this secretive scorpion. 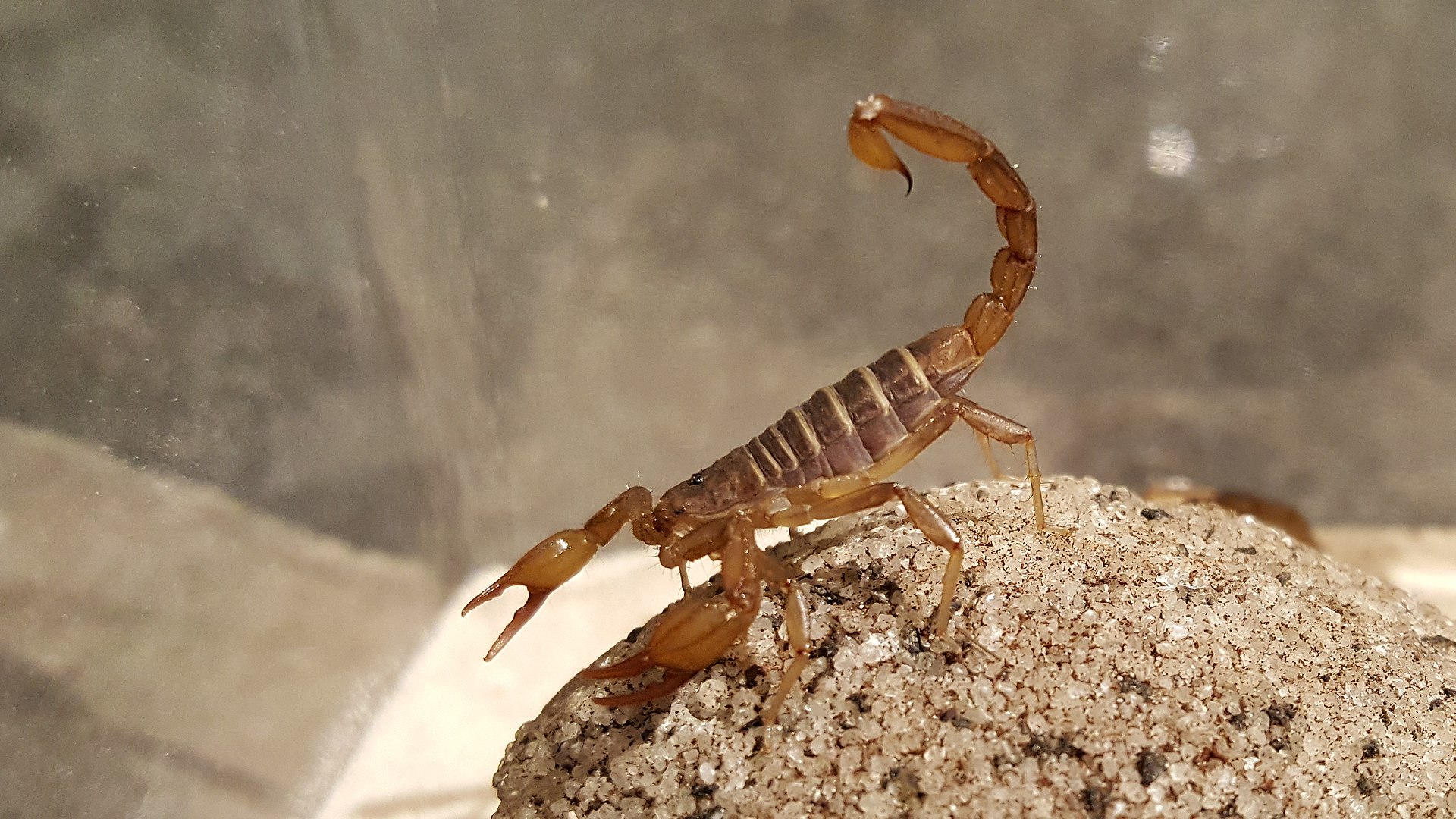 The Northern scorpion is native to the United States and is exceptionally hardy, enabling it to handle a variety of temperatures.

They have dark stripes on the body and a venom-packed stinger on the tail.

They roam the ground hunting for prey at night.

When you see one of these, they are usually the only scorpion in the area.

Their sting causes discomfort, swelling, and redness, which can be relieved with a cold compress. 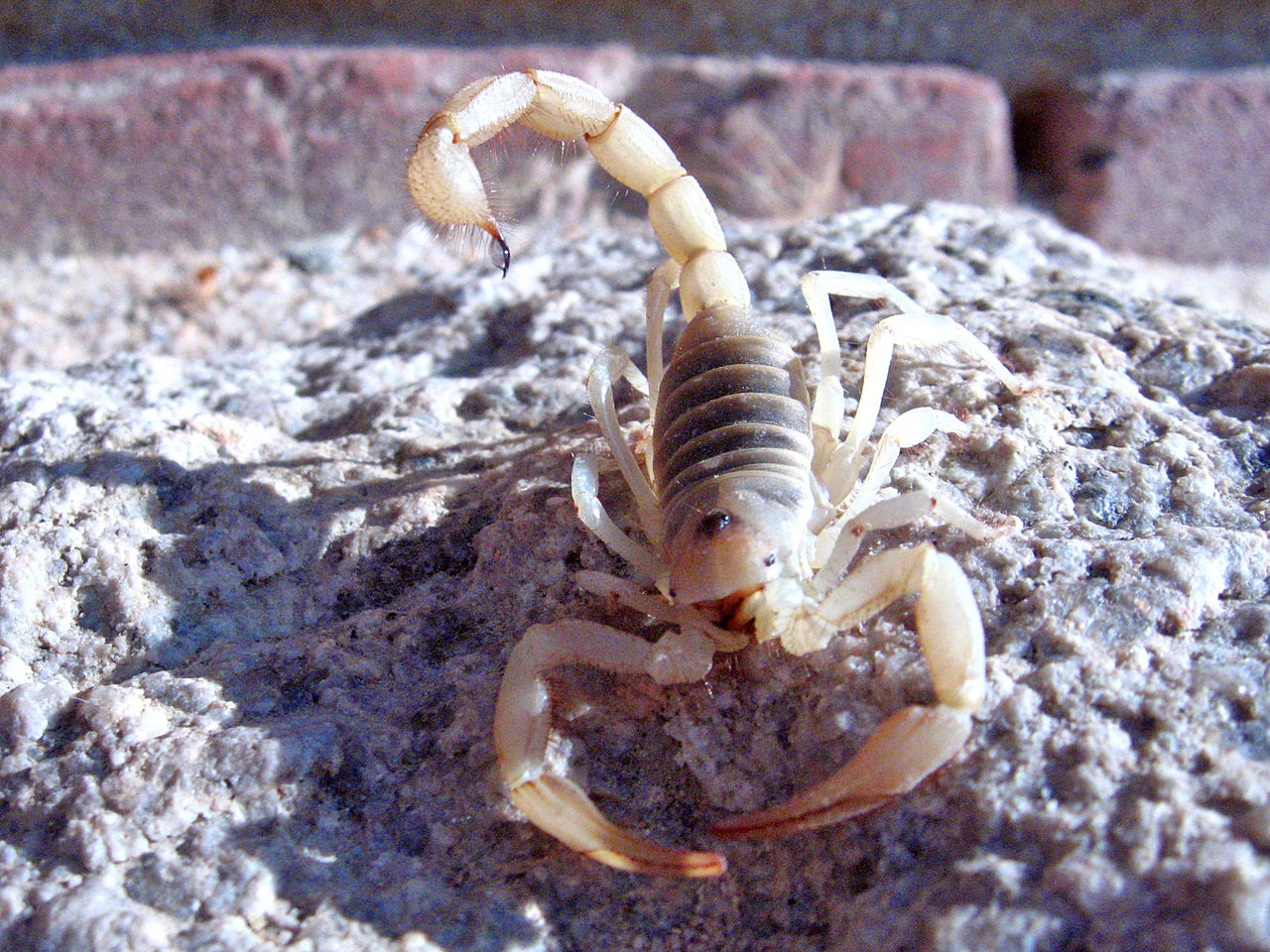 It enjoys a varied diet based on its size, including other scorpions, lizards, and centipedes.

They are yellow with a dark top and crab-like pincers. The body is covered in brown hairs.

They are common in southern Nevada, where they enjoy the warm desert habitat.

Even though this is a large scorpion, its venom is not potent and is equivalent to that of a bee sting. 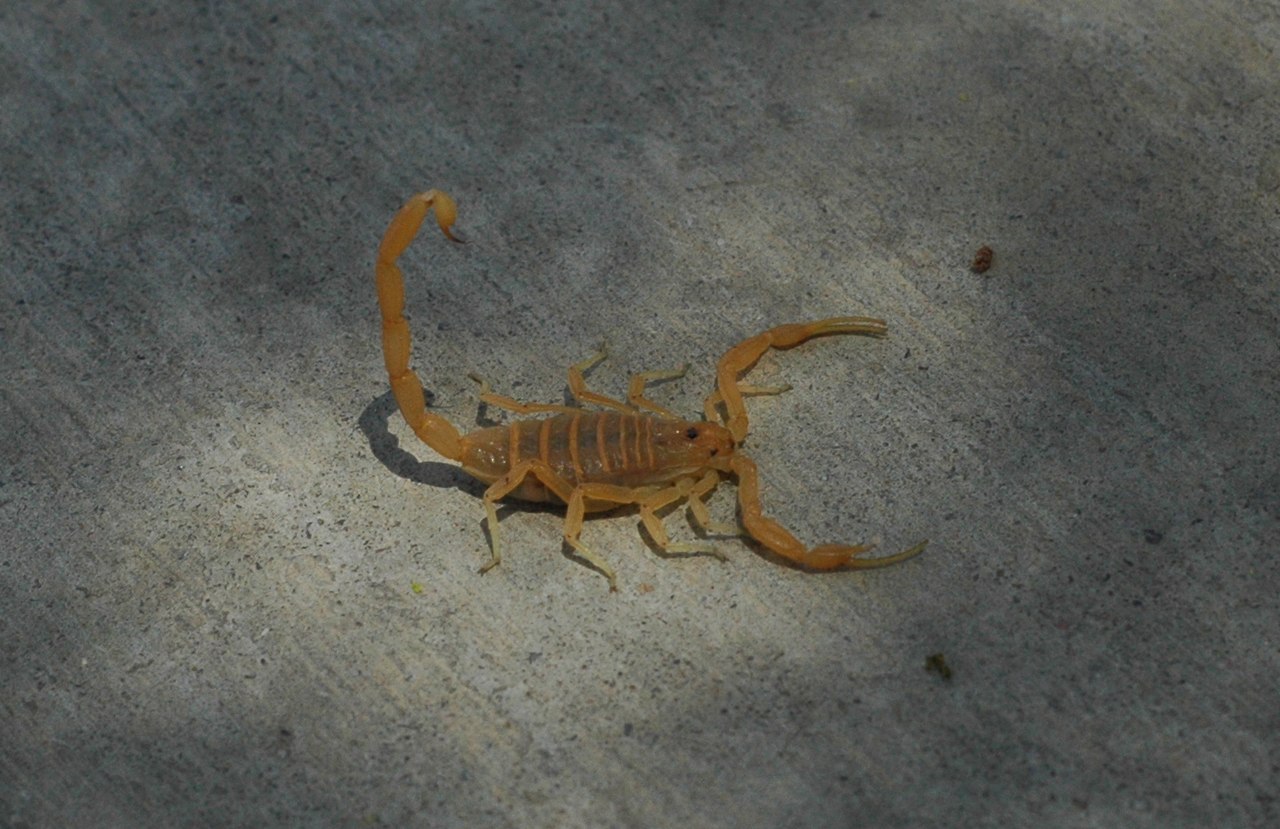 Arizona bark scorpions are light brown scorpions that are small in size with females being smaller than the male, growing to around 2.75 inches (7cm) and males growing to 3.14 inches (8cm).

These nocturnal scorpions are adapted for desert life with an exoskeleton that makes them resistant when it comes to water loss.

They hide during the day, when the sun is at its hottest, under woodpiles, tree bark, and rocks.

They are not burrowers and often make their way into home.

This is the most venomous scorpion in North America and its sting can cause severe pain, numbness, tingling, and vomiting in adults, which lasts up to 72 hours.

The sting site can become immobilized, some people experience shortness of breath for a short period. If you experience any allergic reactions to the venom, it is important to seek immediate medical treatment. 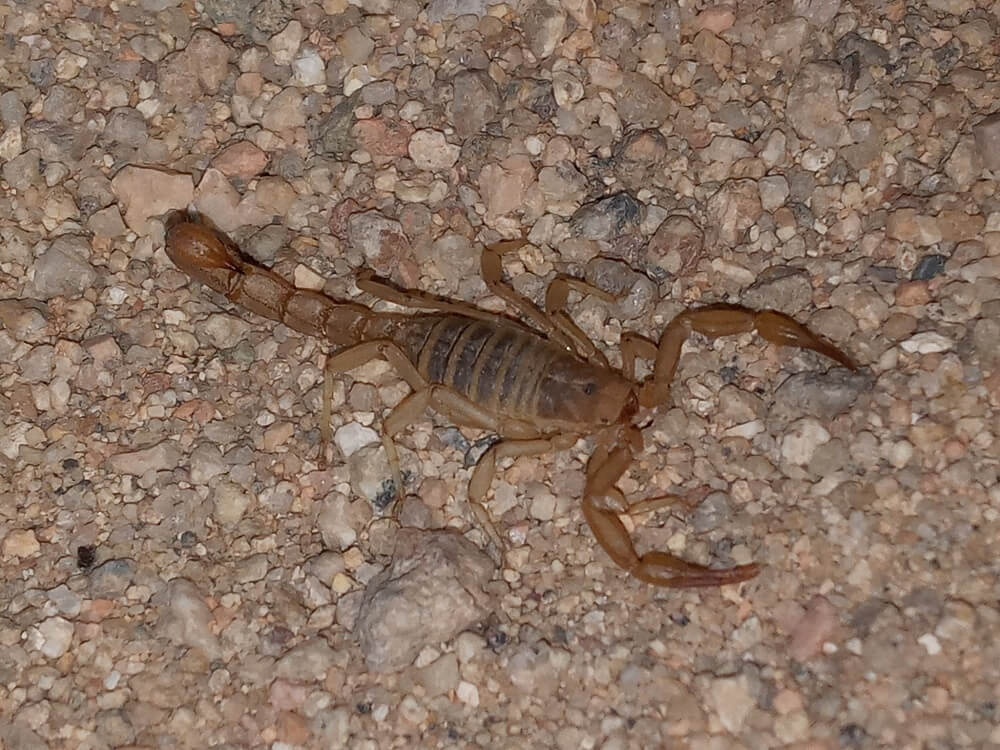 This is a medium-sized scorpion with adults growing to 7cm and weighing up to 10g.

They have brown to tan stripes on the back of their tail, which helps distinguish them from the Arizona bark scorpion.

They are slender with thicker hands.

Some have a yellow to golden brown base color with markings on the tails.

They are often found under socks, in sleeping bags and shoes, and on sandy soil. 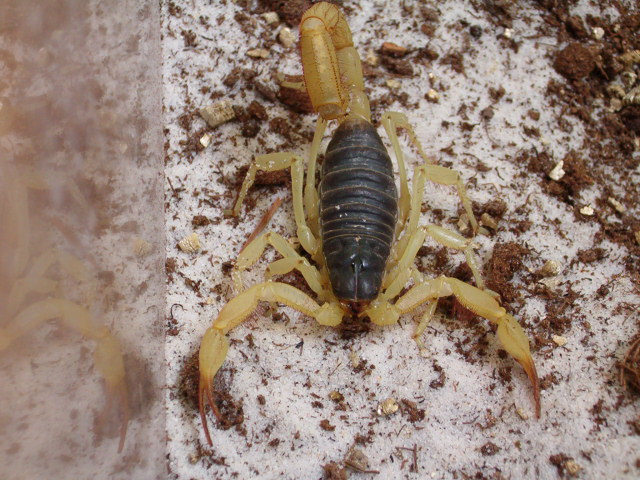 The black hairy scorpion is a large scorpion that can grow up to 5.51 inches (15cm) and is native to the southern desert areas of Northern America where it burrows, spending most of the time digging and enlarging its burrow.

They are nervous and will show aggression if threatened.

These large and active scorpions give a painful sting, but they don't have very potent venom. 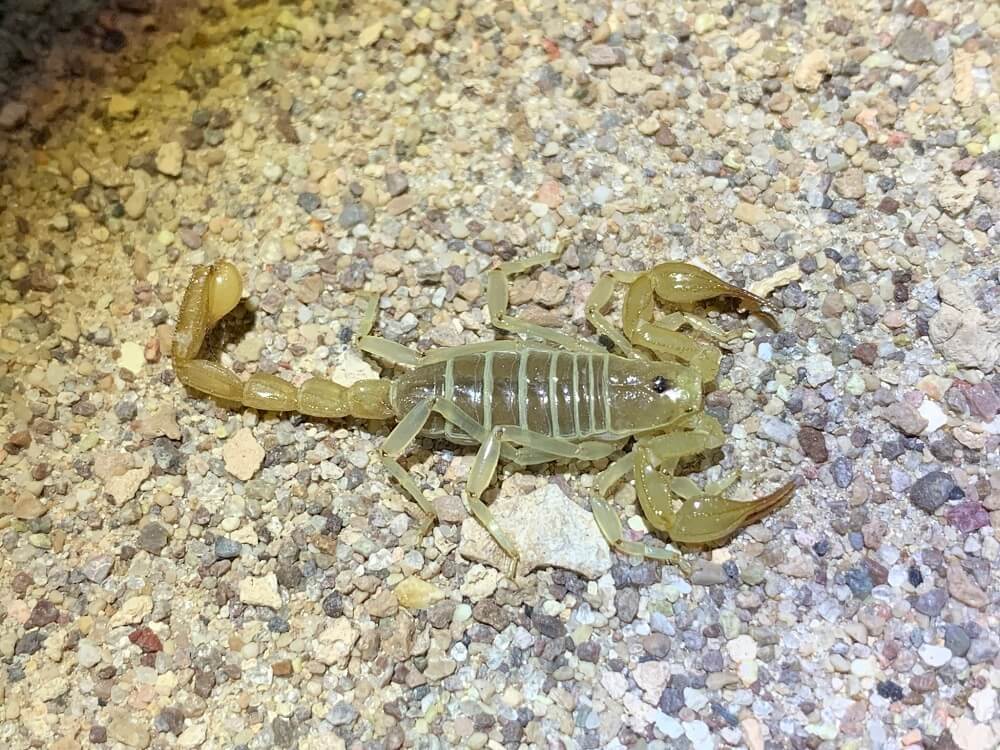 The Paruroctonus aenicola is found in Nye County Nevada with a few observations to date.

They are shy and nervous scorpions and being nocturnal, they are not often seen.

Males grow to around 4.7cm with females, slightly larger at around 4.8cm. 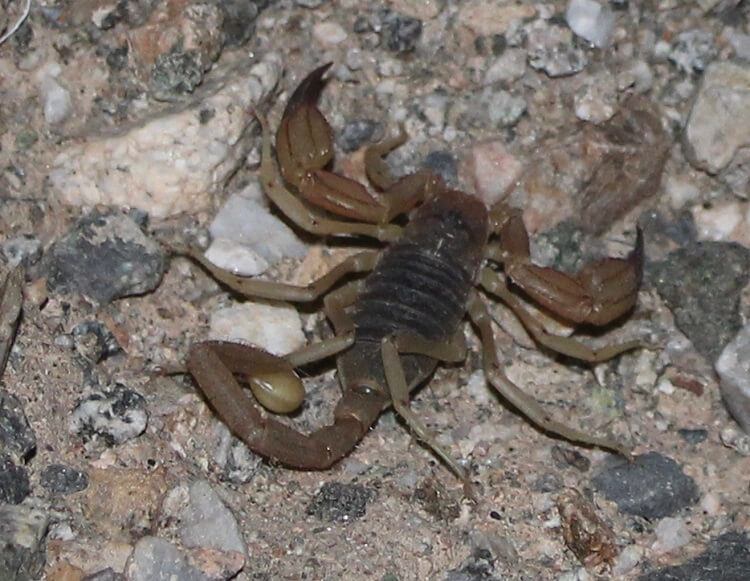 The smeringurus vachoni is a member of the Vaejovidae family and is found in the southwestern United States.

They are completely harmless to humans, though their sting does cause localized pain, swelling, and redness, which should clear on its own within a day or two. 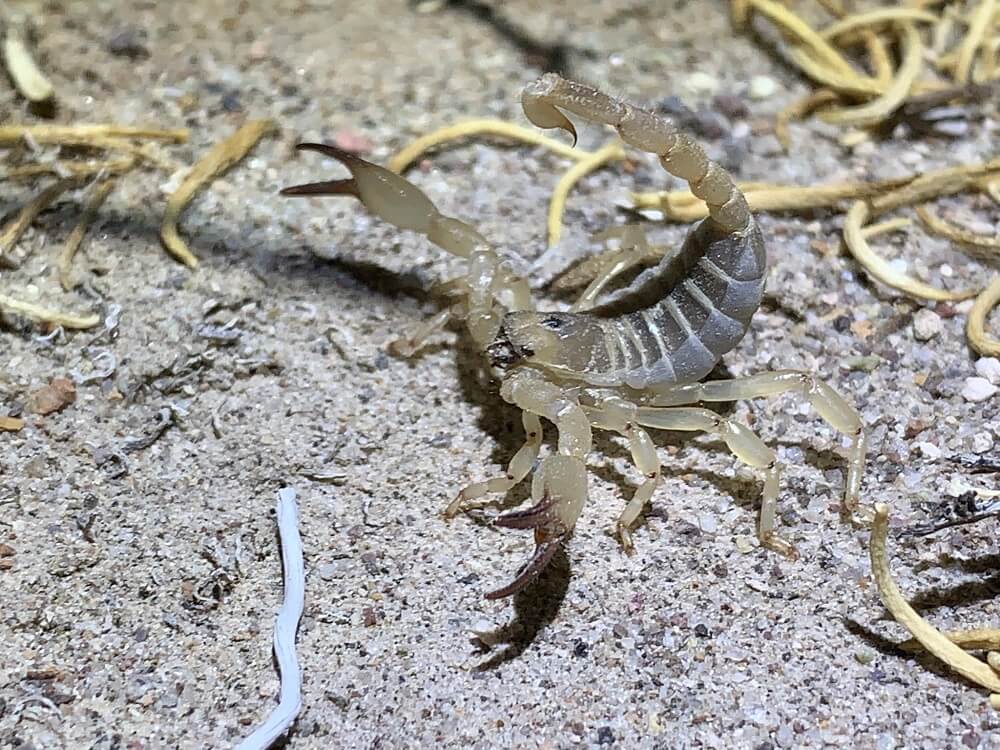 The Anuroctonus phaiodacylus is a very aggressive scorpion that is an excellent burrower.

Males are often seen wandering around looking for a mate.

Males can be distinguished from the female for their swollen stinger.

Their stings are painful and are not considered medically significant. 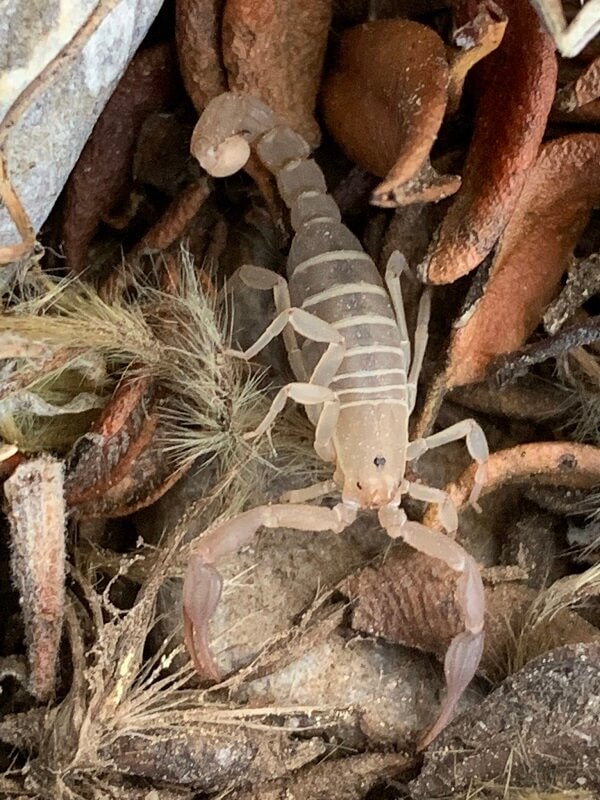 The Sin City scorpion has a yellow to orange or brown base color with black marketings and light-yellow legs.

These are often seen wandering into the home when hunting for food.

They are not dangerous to humans and can be safely captured and released.

If threatened they will try and sting, which is not medically significant and causes discomfort and swelling in the sting area. 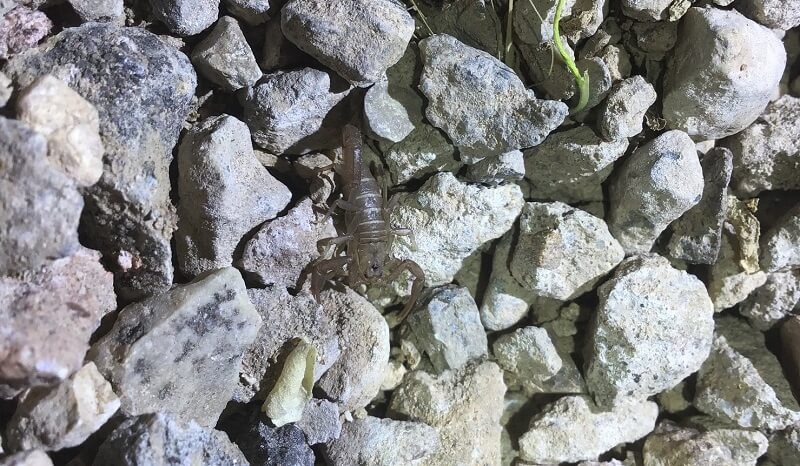 They are not often observed and have a low toxicity venom, which means that you may experience some swelling and pain for a day or two if stung. 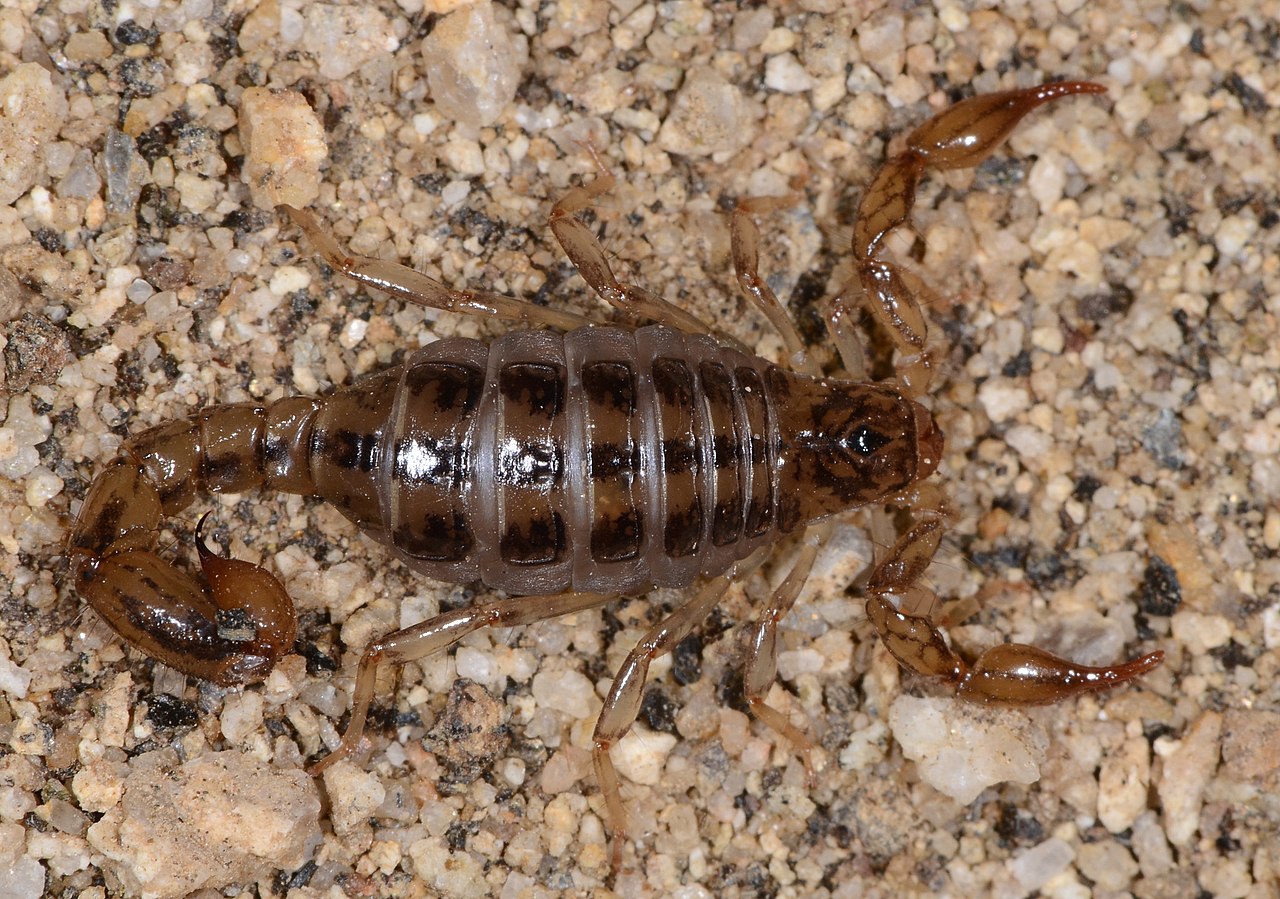 The Superstitious mountains scorpion is the only species from the Superstitioniidae family, which was discovered in Arizona in 1940.

They are predominantly found in southern Nevada, where they prefer mountainous terrain, living under rocks or near plants in desert areas.

While their venom is different from other scorpions, it is not more dangerous and is not considered dangerous.

The paruroctonus luteolus is a member of the Vaejovidae family and one of eight described species in Paruroctonus.

There is very little known about this secretive and nocturnal scorpion, which only comes out of hiding at night to hunt for prey.

Where To Find Nevada Scorpions?

The scorpions you find in Nevada all prefer hiding from the hot summers sun, which is why you often find them hiding under rocks, debris, and tree bark. 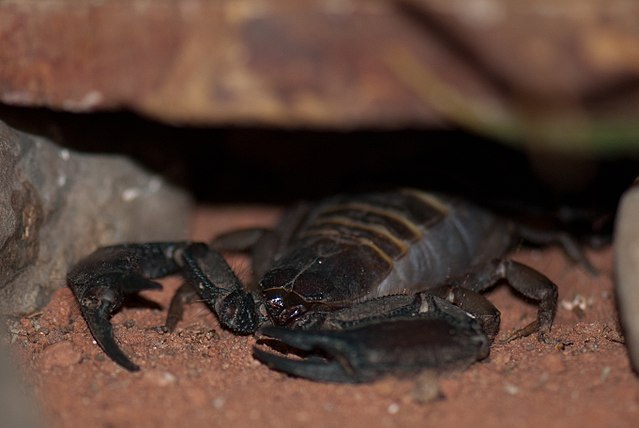 If they cannot find adequate shelter, it is not uncommon for them to wander into the home to take advantage of the air conditioning.

The desert climate of Nevada sees a rise in scorpions and other pests with spring and autumn seeing a large number of scorpions coming out.

They are everywhere at this time of year and you can find them in gardens, bushes, palm trees, and private yards.

They come out at night, hiding by day.

The easiest way to find them is to use a UV light at night, as their exoskeleton becomes fluorescent under the light for a short period. 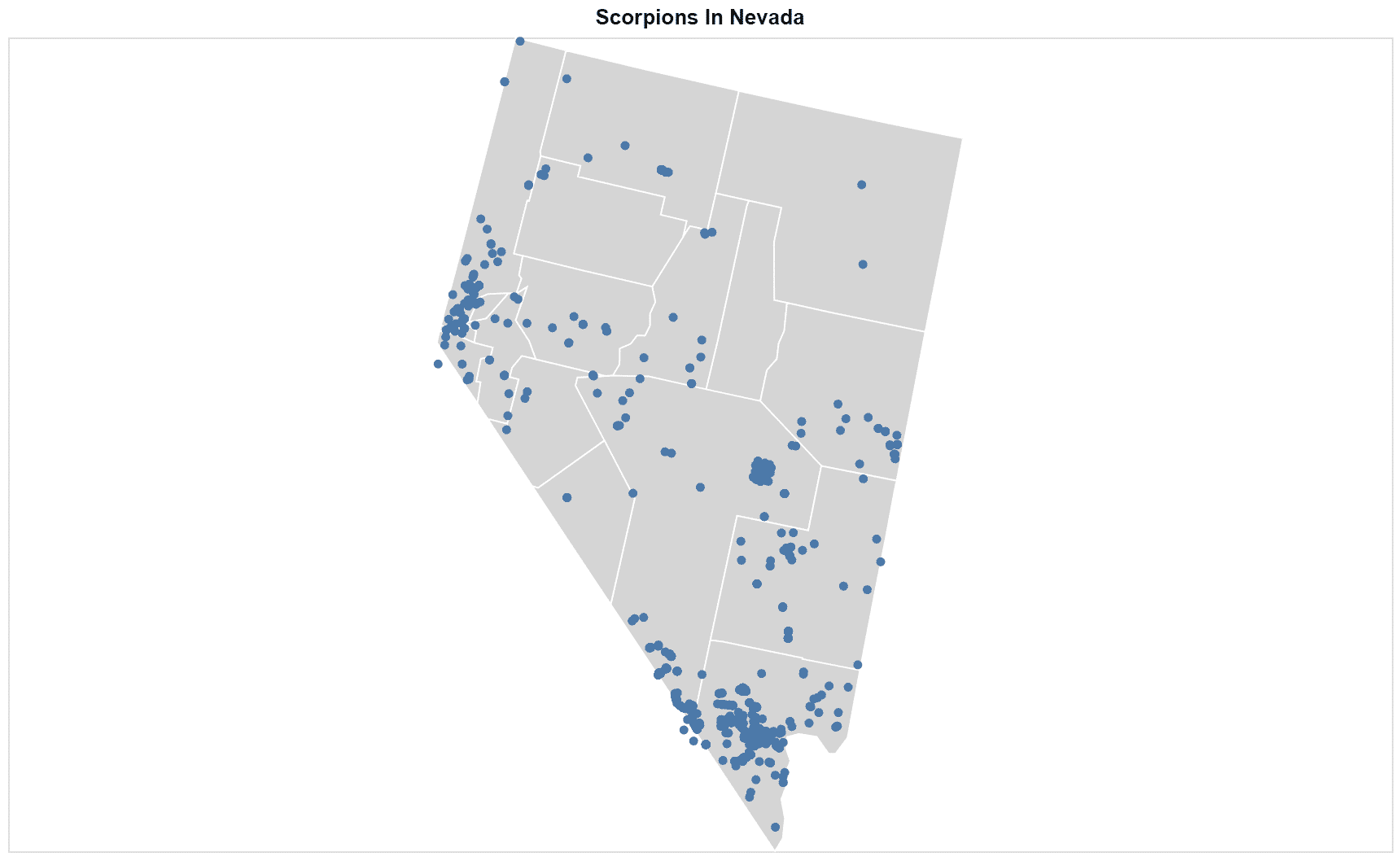 The best thing to do if you are out in the yard or out in nature and see a scorpion is to look, but do not touch or try and capture.

While most are not dangerous to humans, their sting is exceptionally painful and can be irritating for a few days.

If the scorpion is in your home, keep a close eye on it, as they are excellent at running and hiding. If it's close to a door, use a broom and gently brush the scorpion back outside.

How To Get Rid Of Scorpions In Nevada

It's not uncommon to find a scorpion in your home now and then, but if you live in an area that has an abundance of scorpions, then you will want to take some preventative measures to stop them from gaining access into the home.

A clean and well-organized yard will reduce the number of scorpions you have.

Scorpions need shade and cool places to hide during the hottest times of the day, as they are vulnerable to dehydration.

It is recommended to landscape bushes and trees, not allowing them to overgrow and touch the walls of the home.

Keep grass short and declutter the yard, removing any unnecessary items, such as woodpiles, lawn equipment, and debris and brush.

Keeping the home clean is effective in reducing the number of scorpions you encounter.

Crumbs attract bugs, which attract predators, such as scorpions.

Being organized will ensure that you clear under bests and keep closets clean. Scorpions love piles of clothing and boxes to hide in.

Do Some Home Maintenance

A scorpion can get into your home through a hole that is no larger than a credit card. This means foundation cracks, baseboards, doorways, and windows need to be checked regularly to ensure there are no tiny gaps the scorpion can use to get in.

Fix any screens on windows and doors. Keep doors and windows closed, so you don't offer an open door for the scorpion.

Look around the home and remove any sources of water, as scorpions are prone to moisture loss and often enter a home looking for water and a chance to cool down.

Removing standing water, puddles, and moisture sources, such as hose pipes can reduce the risk of the scorpions being attracted to your property.

There are a few essential oils that scorpions don't seem to like. These include cinnamon, peppermint, cedar, and lavender.

Diluting the essential oils with water in a spray bottle and spraying the problem areas and entry points can deter scorpions from entering the home.

Most scorpions are more scared of you than you are of them and they can be carefully and safely captured and released into nature.

Taking preventative measures around the home and yard can reduce the number of scorpions you have.

Always try and watch a scorpion only, do not provoke them as you increase your chance of being stung.