Panther chameleons are one of the most popular chameleons kept in captivity today. These tree-dwelling reptiles come from Madagascar but are popular pets for reptile enthusiasts throughout the world due to their outstanding coloration and host of variations.

While panther chameleons came from Madagascar, there is a difference depending on where in Madagascar they come from. Males tend to be more colorful than females with colors changing based on their mood and living conditions.

What Is A Panther Chameleon Locale?

The panther chameleon locale is how you identify where your panther is from. It represents where your pet originates from and in turn, this will determine your chameleon’s colors.

How To Identify The Locale?

You would think it would be quick and easy to identify what your panther chameleon’s locale is, but this is not the case. Here are some tips to assist you.

Females are not easy to identify their locale, because there isn't much difference between the females no matter which locale they are from.

One of the ways you can try and identify your female panther chameleon’s locale is to let her mate with a male you know what his locale is.

Now while this isn't full proof or one hundred percent accurate, you want to wait until the babies are adult size and judged the locale on the males in the cluster.

Looking at the coloration of the males, you should be able to identify the female’s locale.

Note this is just a guess, as male genetics are usually more dominant.

Even though the male is more colorful than the female, it doesn't make it any easier to identify his locale until he reaches adulthood.

Remember male babies look similar to the females, making it very difficult to identify where he comes from.

In addition to this, many captive chameleons have been bred with a mix of different locales. 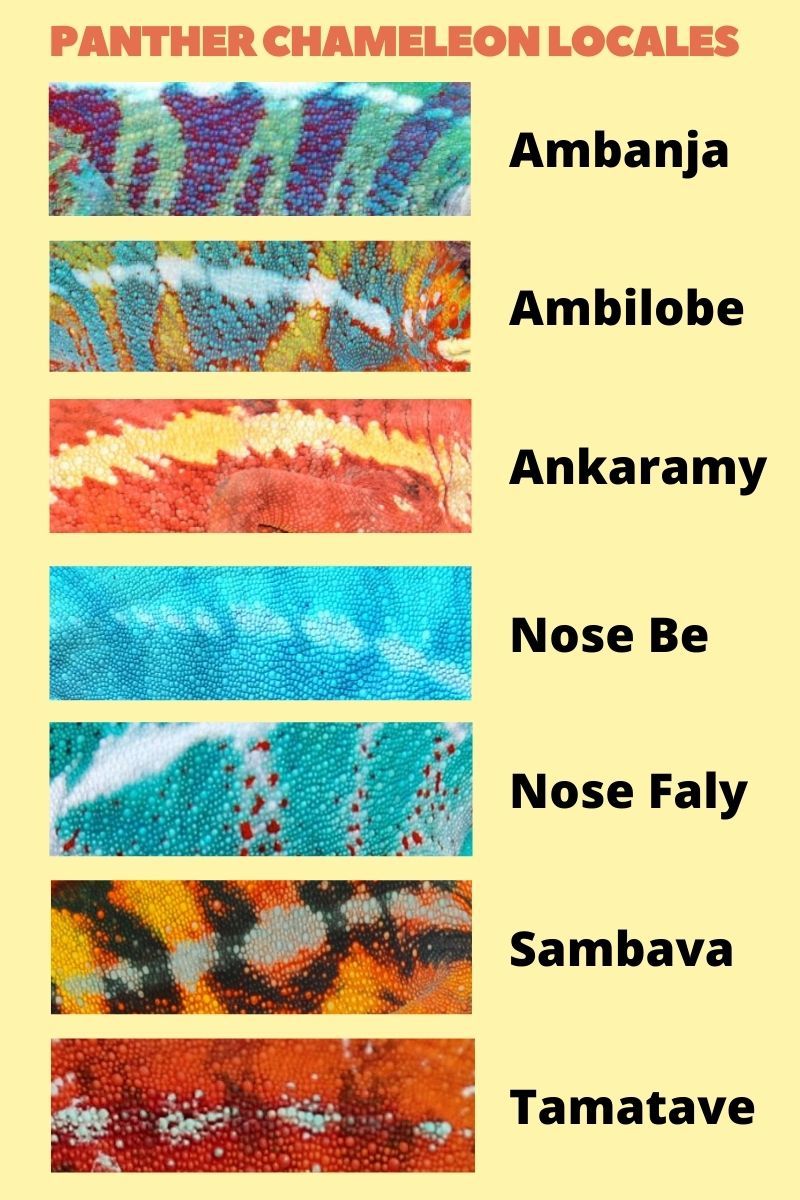 When buying a chameleon and wondering its locale, there are some popular and common locales on the market. These include:

Ambanja panther chameleons come from northwest Madagascar and the males show off a lot of red, green, and blue with the body being green to blue with red or blue barring. The body can show some yellow and the eyes usually have red patterns.

Ambanja is one of the largest Madagascar cities and is surrounded by cocoa plantations, shrubs, bushes, and trees, which is where the Ambanja panther chameleon can be found.

The male Ambilobe panther chameleon has great colors and shows distinct color changes when they are warm or excited.

These chameleons are usually red and green with bright red around their faces, feet, and underside of their bodies. They have orange to yellow patterns in between blue or green stripes.

Ambilobe is one of the largest cities in North West Madagascar and is surrounded by plantations, where the chameleons are found.

They are not that common in the city. They can be found in the shrubs, rice fields, and sugar fields surrounding the main city.

The Ankaramy panther chameleon offers a unique color that you won't find in the other locales.

The male tends to be a dirty red color that changes to pink with white lips and white lateral stripes. Due to the pink coloration of the males, they are often referred to as “Pink Panthers.”

When you look at a male Nosy Be panther chameleon, you will see that they have less patterns but bolder coloration of blue, green, or both.

They often have a thin white strip running down their body over green coloration and blue stripes down the spine.

They are the most camouflaged of the locales, which look fantastic in a captive environment.

These panther chameleons come from an island in North West Madagascar, which is a popular holiday location attracting visitors by air and sea.

It comprises of beautiful beaches but you will find your panthers in the national park, plantations, and abundance of vegetation surrounding Nosy Be.

These are a very interesting locale to purchase when looking for a panther chameleon, as they are similar to the Nosy Be panther, but they tend to have large patches on their bodies, which are displayed as colored spots.

The coloration varies from red and green to yellow and blue green.

In some instances, the chameleon can be mostly white. They have a white line that runs the length of their backs. The patches of white help to hide the panther behind leaves and branches to protect them from predators.

These chameleons are the easiest to see when they are cold or stressed as they change their color quickly to become very dark, almost black.

Nosy Faly is an island that is found in the Mozambican channel, which comprises of beaches and savannas. You find the panther chameleons in amongst the vegetation and mangroves surrounding the area.

These panther chameleons have warm colors. The males show reds, oranges, and yellows with blues and whites. They have a white stripe down the side, which is also on their lip.

Some males offer brilliant yellows and greens with a red, brown, or burgundy stripe from the spine to the middle of the back. They also have a stripe under the belly, which breaks up the shape of the panther.

These panthers are from the East Coast of Madagascar which is known as the “Vanilla Island,” due to its vanilla plantations. You will also see rice fields and ample vegetation for chameleons to hide.

The Tamatave panther chameleon is from the East Coast of Madagascar.

These panthers have green base coloration that will turn red with white specks. In most cases, they tend to be bright red with a host of variations.

These chameleons are often found in the Toamasina's Gardens in Tamatave, where there are overgrown lawns and plenty of trees.

Panther chameleons remain one of the most popular chameleons to be kept as pets. They offer excellent colorations.

Bear in mind you cannot use locale alone to identify where your panther chameleon comes from, as the majority of captive bred panthers have a host of locales in them.

It is always best to speak directly to the breeder to identify which locale you are purchasing.