The blue tongue skink species (Tiliqua scincoides intermedia) is a blue tongued lizard, also commonly referred to as blue tongues in Australia. The most common characteristic of these lizards is the blue tongue that is used to warn potential predators.

These lizards are common pets, bred in captivity. They enjoy a varied diet of insects, flowers, fruits, berries and gastropods.

Unlike many of the other lizard species such as bearded dragons or leopard geckos, the blue tongue skink is shy and a slower lizard with their short legs.

These lizards are mostly found in Australia, with an exception which is found in New Guinea and on numerous Indonesian islands.

These are large lizards with a light body, short legs, broad heads and they grow up to forty-five centimeters).

There is a wide choice of blue tongue skink species, these include:

This is a very popular species which comes from the Tanimbar Islands, which is approximately thirty islands found in East Indonesia.

This species grows up to eighteen inches in size and are slow growing. As they age the species tends to turn a silvery color. They have dark colors on their heads with white lips and chin with glossy scales and a hard body. 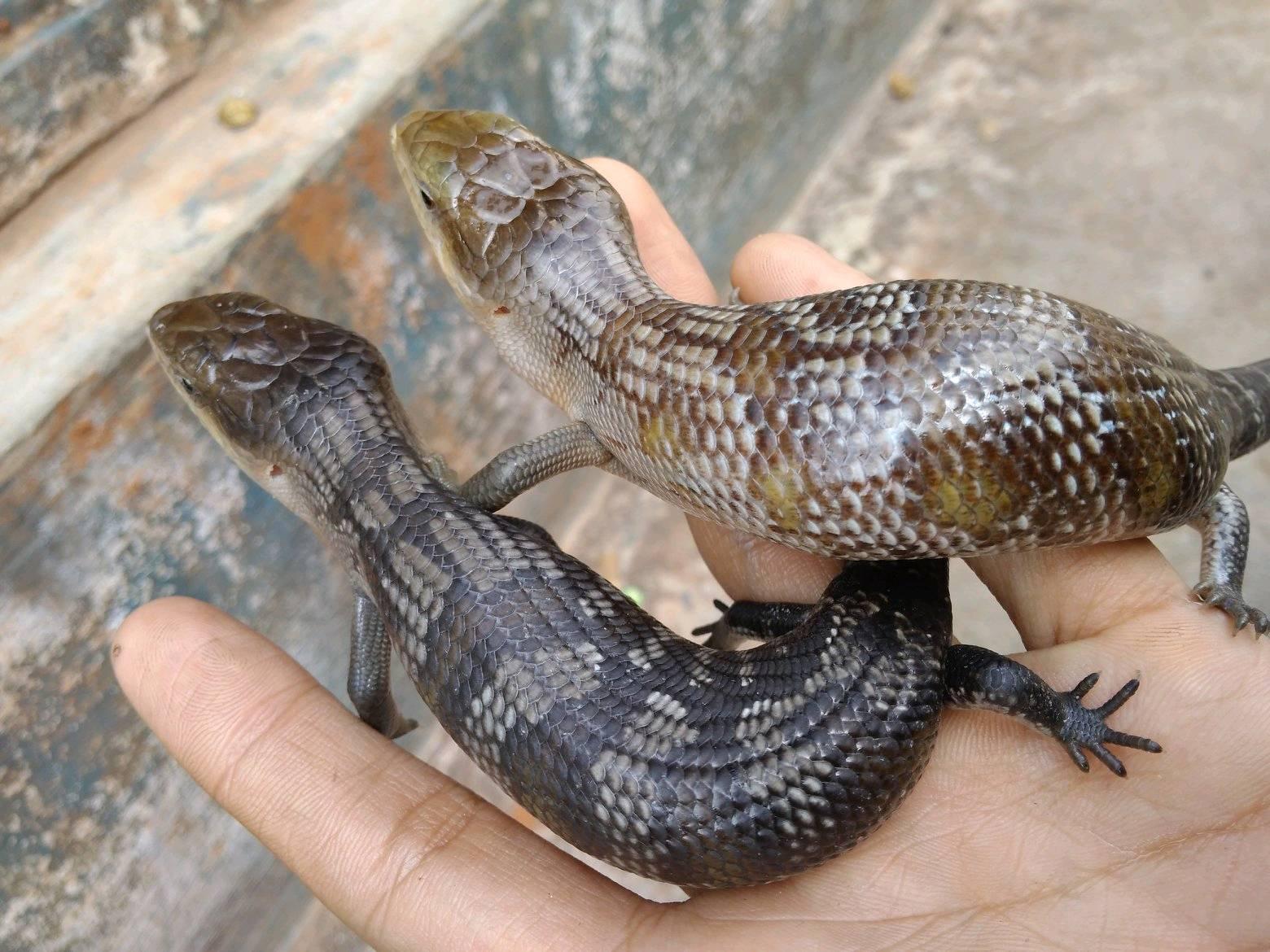 The Tanimbar blue tongue skink can live up to twenty years with a diet that consists of plants and animals, including:

These popular lizard pets can live up to twenty years.

They come in a choice of distinctive patterns and a range of orange colorations from soft to bright orange and in some cases, they are more yellow with dark stripes, which can be found on their back and sides.

The blue tongue is used as a warning for predators. They have short legs and can grow up to twenty-two inches. Being ovoviviparous, the eggs are hatched within the body with a one-hundred-day gestation period.

Their diet is varied in captivity and includes insects, worms and vegetables from peas and carrots to dandelion greens and crickets and mealworms to super worms. They tend to be an affectionate lizard and a popular pet.

The Eastern blue tongue skink (Tiliqua scincoides scincoides) can be found in Eastern Australia. Their natural habitat includes bushland and some suburban areas. The blue tongue is what makes this lizard so distinguishable.

This slow and short lizard has grey to brown scales with a barred pattern which is found across the tail and body. The underside is pale in comparison to the rest of the body. 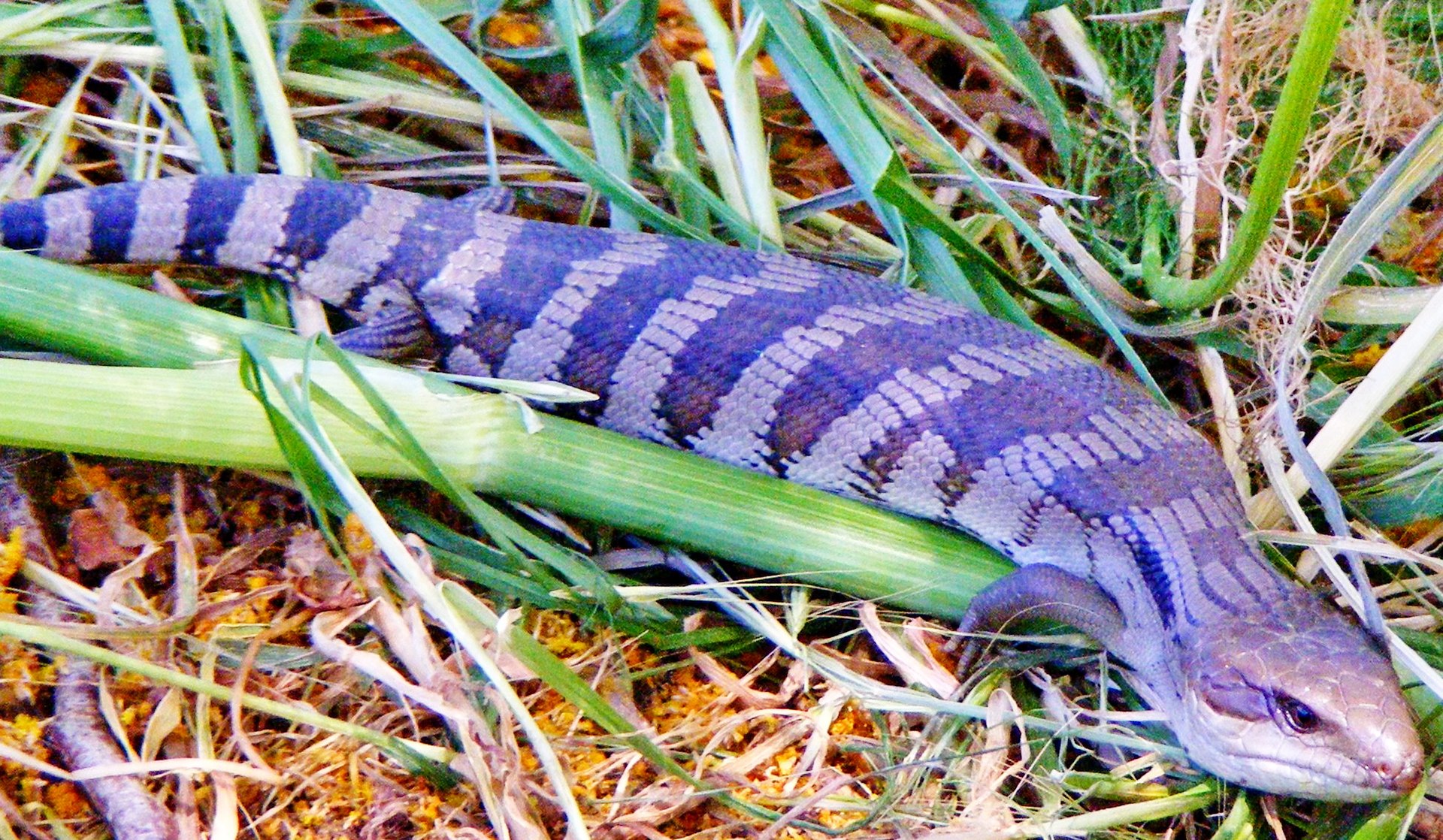 In captivity, the lifespan of the Eastern blue tongue skink can be up to thirty years. Distinguishing features include a short and fat tail, thin lateral lines that run vertically, a narrow head and brown areas on the side of the belly.

The Eastern blue tongue skink spends most of their day searching for food and basking in the sun. Their tongue is used when the skink feels threatened. When threatened the lizard will puff it's body out and stick out its blue tongue while hissing. 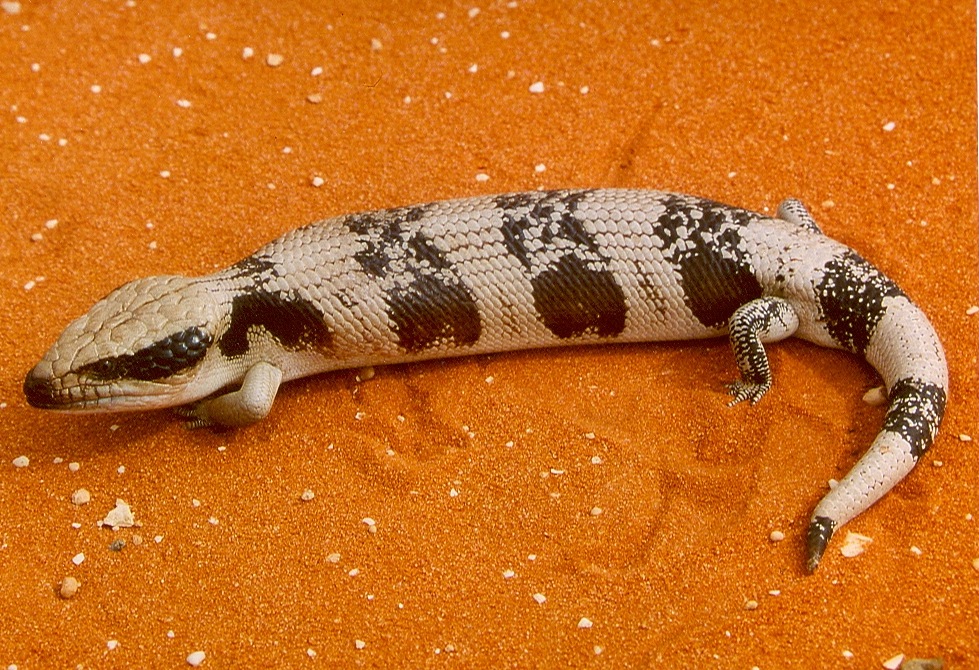 The Western blue tongue skink (Tiliqua occipitalis) is native to Western Australia, found in dunes, shrubs, grasslands, woodlands and more. They tend to sleep under rocks. They can grow up to eighteen inches in length with a wide and large body with short legs.

The pattern on the lizard is brown bands on the body and tail with a pale underside. There are distinctive marketings at the back of each eye.

These lizards use their blue tongue when they feel threatened. They hiss, flatten their bodies and stick out their tongue to make themselves look more dangerous and bigger than they are.

Their diet varies from insects and snails to berries and vegetables. They are slow moving with a very powerful jaw, they can give a painful bite. In captivity, your lizard can live up to thirty years.

Distinguishing features include bright orange coloring, thick horizontal stripes, short tail, and black streaks on the tip of the nose.

The Central blue tongue skink (Tiliqua multifasciata) is a blue tongue lizard that is native to New South Wales in Australia.

These lizards have a short body, think tail with five digits on both the hind and fore limbs. This skink is pale brown in color, which can range to pale grey with orange / brown banding which is found down the body and tail. The bands are wider than the paler colors.

The Central blue tongue skink has black stripes that surround the eye, these extend to above the ear. The underside is pale cream or white.

Their diet comprises of seeds, insects, invertebrate and vertebrate materials and more. When kept in captivity, the lifespan of this lizard can range from fifteen to twenty years, sometimes more.

As with the other blue skinks, the blue tongue is used to scare off predators. This is a very robust lizard that is completely harmless and a popular pet choice. They adapt very well in captivity and can grow up to twenty inches in length.

The natural habitat of the Blotched blue tongue skink is forests, woodlands and heath lands of South Eastern Australia.

It enjoys an omnivorous diet of insects, wild flowers, fruits, snails and more. These lizards spend their day basking in the sun and searching for food.

You will find with this skink there are no body stripes, but small flecks are often found on the face. They have a very flat tail with some offering a pink color.

There are a variety of shinglebacks, including: 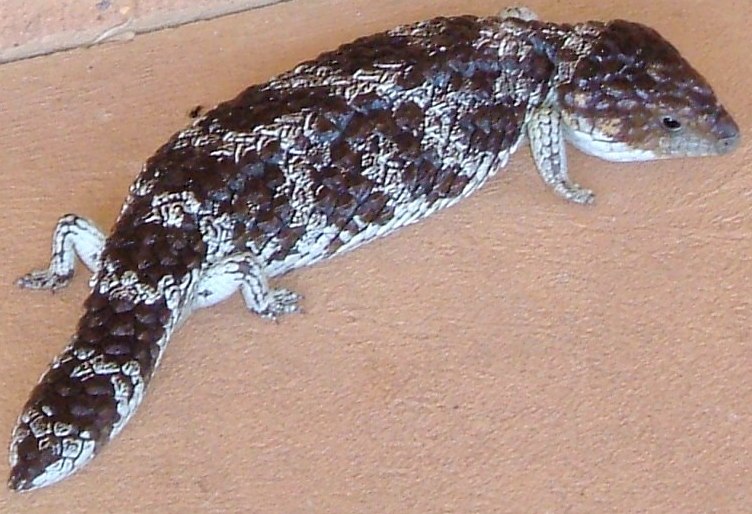 The shingleback (Tiliqua rugosa) is a skink which is natural to Australia. There are four recognized subspecies which are all slow moving, short tailed and have blue tongues, which are used to scare off predators.

These skinks have armored bodies and come in a choice of color. variations which can range from cream to dark brown.

Its tail, which is wide, short and stumpy resembles the head, which confuses predators in the wild. This skink is omnivorous and eats a variety of insects, fruits and vegetables. In captivity, this skink can live up to fifty years and can grow up to eighteen inches.

What is very interesting about these skinks is that they are monogamous and will pair at the end of spring.

In the wild, these lizards move together and spend around seventy-five percent of their time together, even, sharing the same living areas. They will come together every mating season, which can be for twenty or more years.

What distinguishes this blue tongue skink is its armored scales, it's very wide head and short tail. A fun fact about this skink is that they only have up to three young at a time with the babies looking exactly like the parents with large heads.

Pygmy blue tongue skink (Tiliqua adelaidensis) was thought to be extinct but was rediscovered in 1992. This skink comes from South Australia, where the lizard has a limited habitat.

They rely on grasslands, old spider burrows and more to create a home. This lizard’s natural habitat is shared with around seven thousand people, which is why such focused conservation efforts have been made to maintain the species where possible. 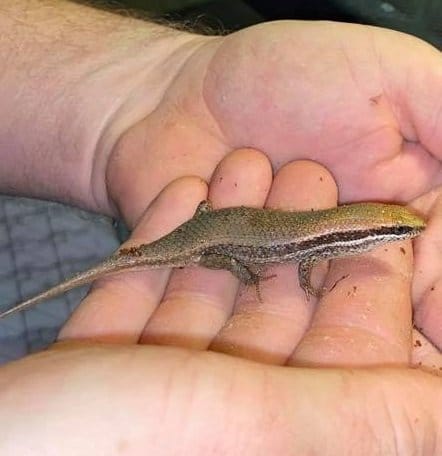 These are much smaller than the other subspecies of skink. They are often only seven inches in size with females being so slightly larger than the male.

These lizards have large heads with Armour plated scales. Their tongues are rose pink in color. and are not blue, which is very interesting. Body coloration is a light brown to tan orange with the tail and legs being slightly lighter in color.

They often comprise of scattered blotches and spots, which are darker than the rest of their bodies.

These lizards are more cautious, being so much smaller than the other blue tongue skinks. They tend to sit in holes and wait for insects to pass.

What makes these skinks stand out is the fact they don't have stripes or batters and their heads are too big for their bodies with a thin and short tail.

The Indonesian blue tongue skinks (Tiliqua gigas) are found on the island of New Guinea and other surrounding islands. This lizard is a close relative to the Eastern blue tongue skink and is found in rainforests.

These lizards have long tails and prefer high humidity levels, something to bear in mind when keeping them in captivity.

There are three subspecies: 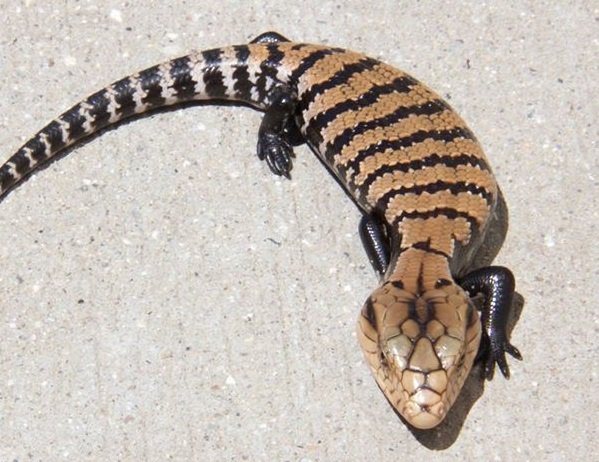 These are opportunistic eaters and in the wild they eat everything from small inverts to vegetables and fruits. Their diet should comprise of forty percent protein, fifty percent greens and vegetables and ten percent fruits. Feeding should be done one to three times per week.

The Indonesian blue tongue skink has a light blue tongue which can turn pink over time. They have solid black legs with think horizontal stripes on their bodies. The top of the head is smooth with a mottled tail. 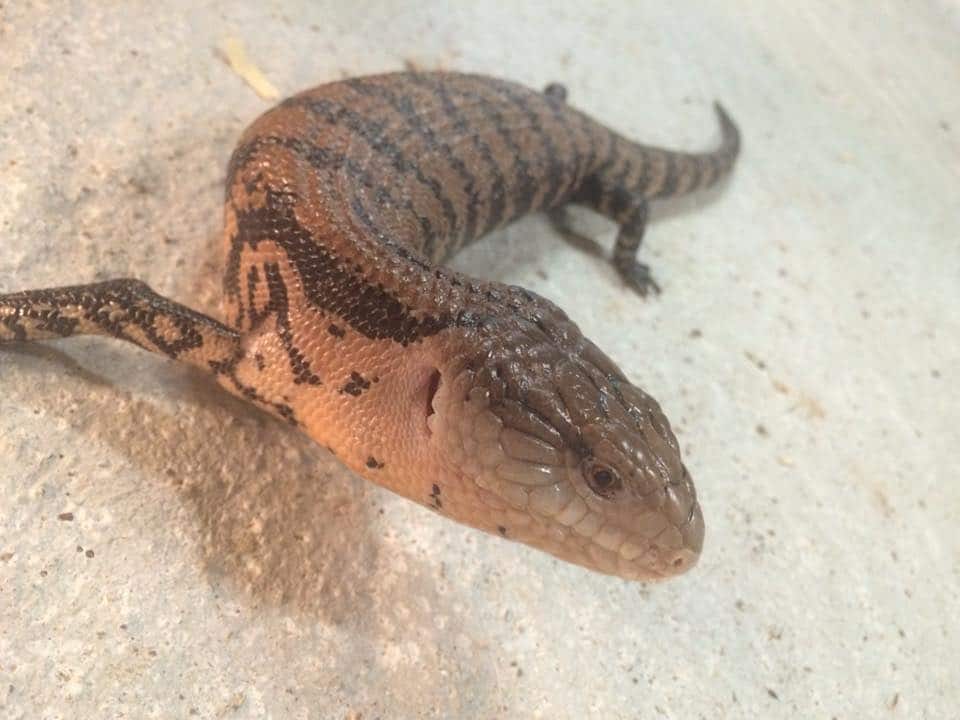 These skinks come from Merauke city in Southern Papua New Guinea. With good temperament and majestic look, these lizards are a top pet choice for many.

Their diet consists of snails, insects, greens, vegetables and fruits. What sets these Indonesian skinks apart and what makes them easy to identify is their large size. These are the largest in the skink family reaching up to thirty inches when fully grown.

They have a cleaner body with distinct striping. They can be a faded grey color. and their forelegs are not a solid black. What makes these skinks stand out is their calm nature. 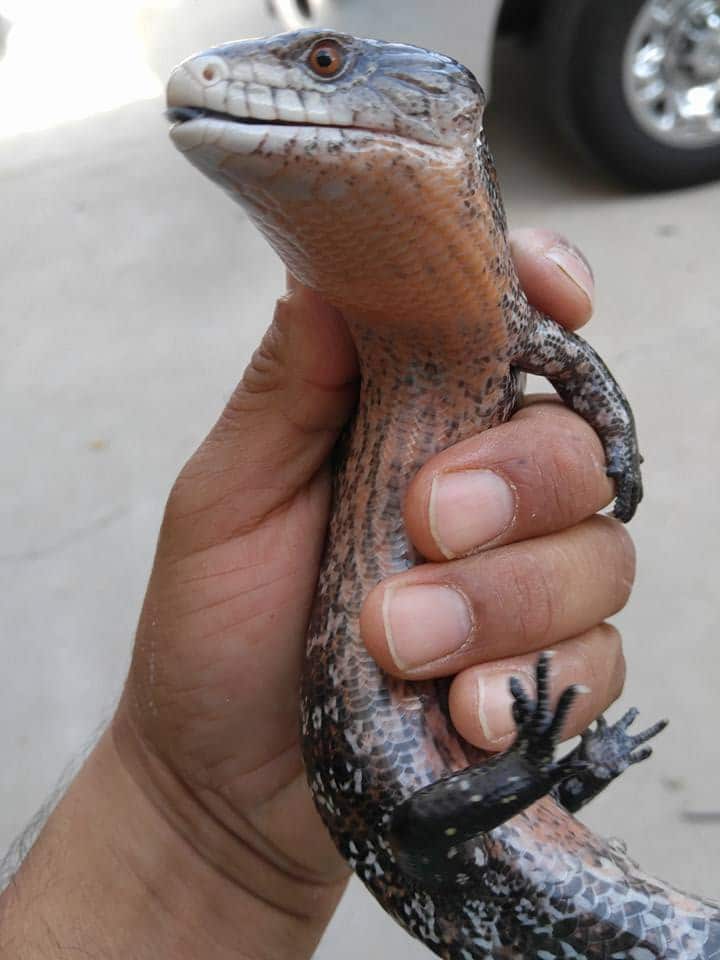 This lizard comes from the Kei Islands with green being its main body color, usually with some black and brown splotches and stripes.

There are a variety of colors including yellow with orange and red stripes. The colors can often vary from dark to light greens. These lizards have a very unique head which looks like an extension of the body.

These are very robust lizards, ideal to keep in captivity as pets. They are more active than the other species. These lizards can grow up to thirty inches and are easily identifiable with their short heads, white tip of nose, olive and lime green colorations and more.

These lizards have very distinct patterns which are beautiful. The thick dark black or brown stripes stretch over a brown or peach gold undertone. Their bellies can range from a light cream to red.

The blue tongue is used in times of danger to warn off predators.

These lizards can grow up to thirty inches and have an impressive lifespan in captivity of up to thirty years. They have up to fifteen babies per litter after a long one-hundred-day gestation period.

The lizard's diet consists of anything from snails and insects to greens and vegetables. In captivity, they enjoy a diet of forty percent protein, fifty percent greens and ten percent fruits with feedings up to three times per week.

The blue tongue skink is a popular pet due to it being very quiet, gentle and docile. These lizards are easily tamed completely with dull teeth, which makes it very hard to break skin if you experience a bite.