Blue tongue skinks (BTS) are a popular lizard pet kept in homes around the world. These lizards are native to Australia, new Guinea and Tasmania, where they live in a mixture of scrubland, woodland and semi desert areas.

The blue tongue skink is omnivorous, which means it eats animals and plants, which comprises mostly of insects, plants and some other reptiles.

What makes these reptiles stand out is their long blue tongue, which is a defensive mechanism, protecting the lizard against predators. These are very docile reptiles which rarely will show any aggression.

They are shy and enjoy hiding in their shelters. When they feel threatened, they open their mouth to display their blue tongue, puffing out their body while they hiss. The body puffing increases their size, making them look larger than they are, while the tongue shows them as dangerous.

The majority of blue tongue skink species you purchase are bred in captivity due to Australia prohibiting the export of their wildlife, which includes lizard.

Morphs (sometimes called phases) are very popular in the reptile world. This is when a lizard is different from the parents due to altered DNA and genes. The majority of morphs are bred, but morphs do occur naturally as well.

Altering the DNA and genes results in offspring that are a mutation, changing skin colors, patterns and behaviors.

When selecting a lizard, the majority of owners will make their selection based on colors and patterns.

The Language of Variation 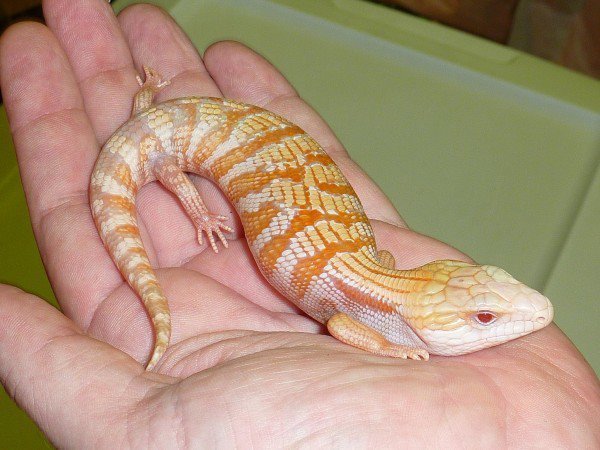 The Albino blue tongue skink lacks normal pigmentation and are very light in color. These are extremely rare and unavailable, so finding one is a true treasure.

Two blue tongues may produce a white albino baby, but it's not always successful.

In most cases these blue tongue skins are pure white with feint yellow or orange stripes. Often, they have red or cloudy eyes.

The T+ stands for Tyrosinase positive. 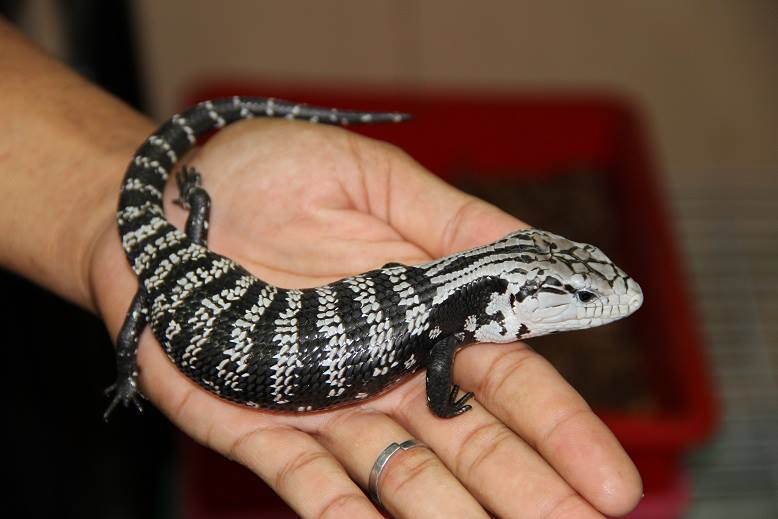 When organisms are referred to as Axanthic, the “A” at the start of “xanthic” means without. Therefore, it is missing a colored pigment.

Anerythristic is referred to a reptile that is missing a red pigment. A skink that would normally be red and doesn't show any red pigmentation will be called Anerythristic / Axanthic. 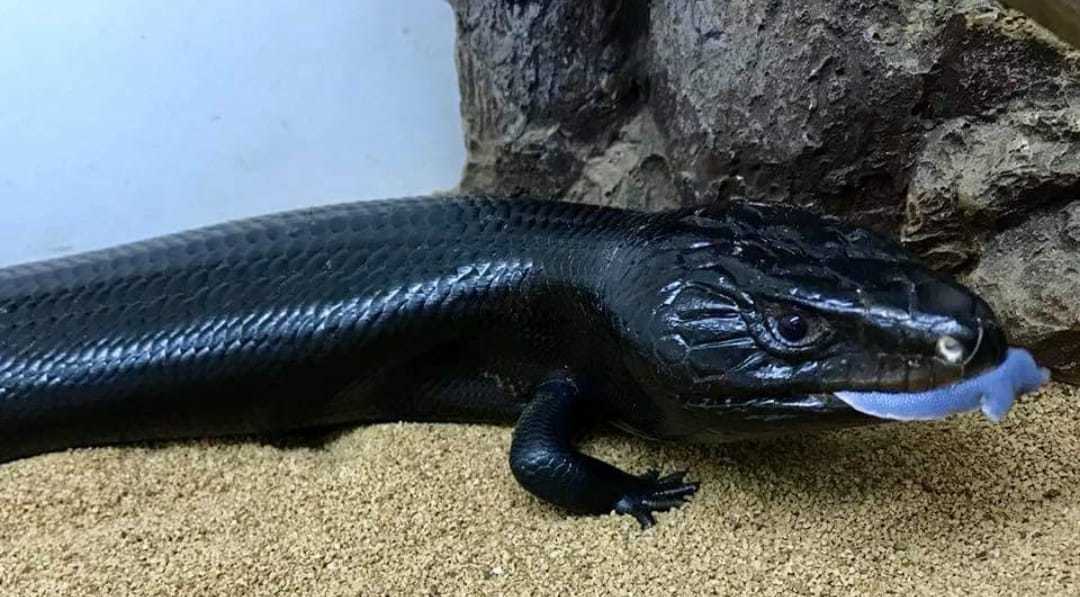 Melanistic blue tongues are jet black and very striking in appearance. They usually come with "hyper" and "hypo".

Rather than having a recessive gene, these animals have visible darker than normal colorations. They are one of the most sought after blue tongue skinks for their beautiful sleek black color. 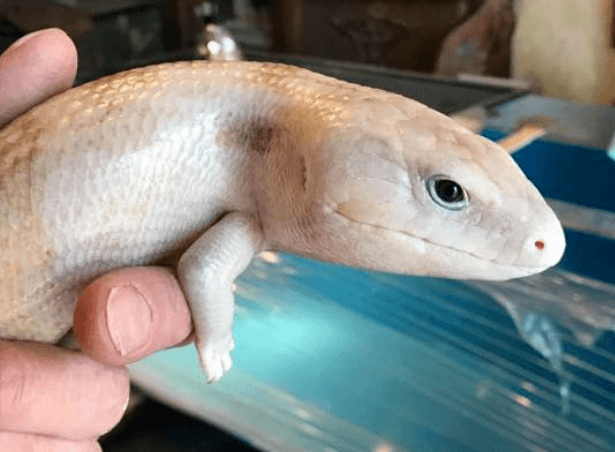 Leucistic are lacking all pigmentation. These are usually pure white blue tongued skinks. As they age, they can develop some smudgy coloration. While these skinks lack pigmentation, their eyes remain normal. The dark eyes are a startling contrast against the pure white skin. 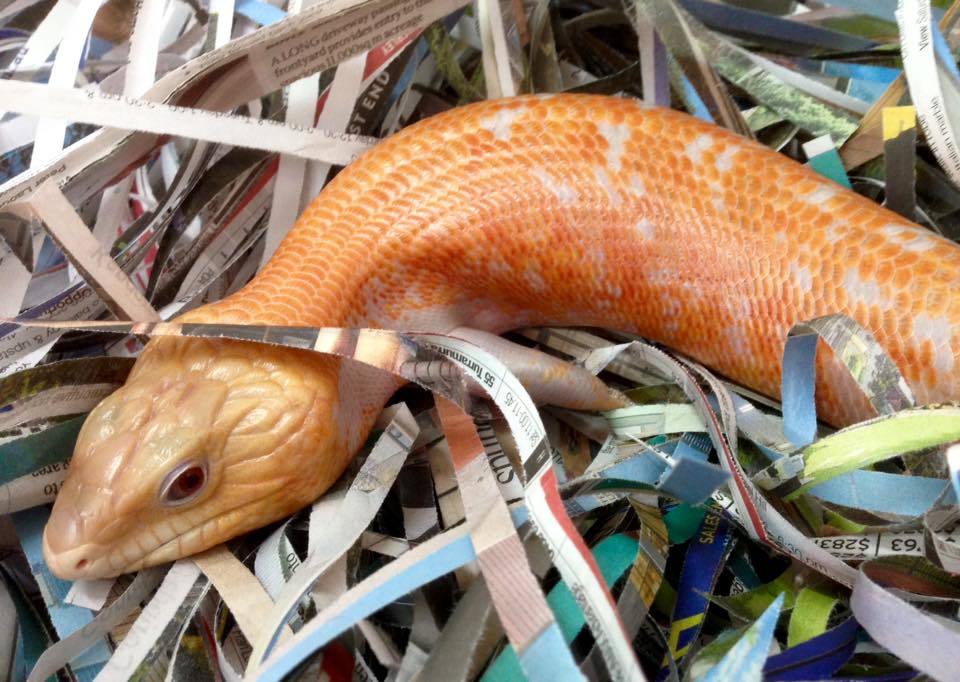 A black blue tongued skink mated with an albino can produce a lava. This is a beautiful morph that has reptile enthusiasts lining up for one. They have become a highly in demand morph when it comes to blue tongued skinks.

This morph is burned orange in color. It's body color blends in with the stripes to produce a beautiful skink.

It's not uncommon for these skinks to have some white on their bodies, patches or parts of stripes.

There are so many great morphs, but the one that stands out is the caramel blue tongue skink.

This is tan colors skink with black bands across the back. It is easily identifiable and is a northern skink. The black on the sides do vary slightly. 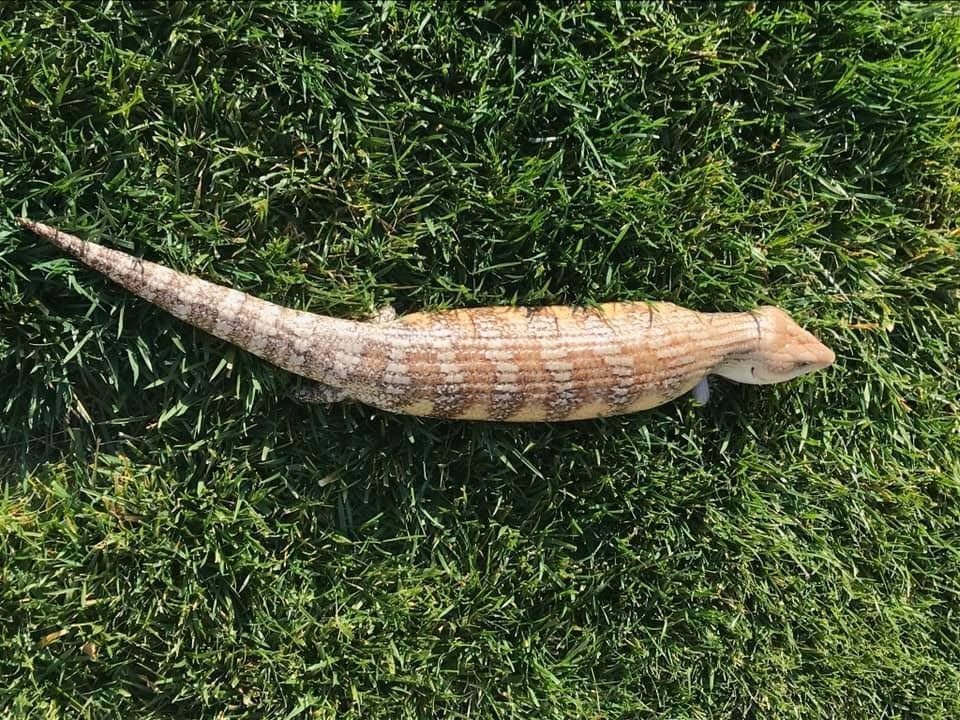 They are different from the Caramel morphs. They are white, yellow and even gold in color without the black bands. They also tend to have blue eyes, even though they do look black from a distance.

The T+ Caramel blue tongued skin has developed through years of careful breeding to provide a recessive gene that is increasing in popularity.

The Turner White and Fenn White are both lightly colored blue tongued skinks that have very light and subtle patterns. This makes them unique, a stand out pattern which makes a wonderful and interesting pet. 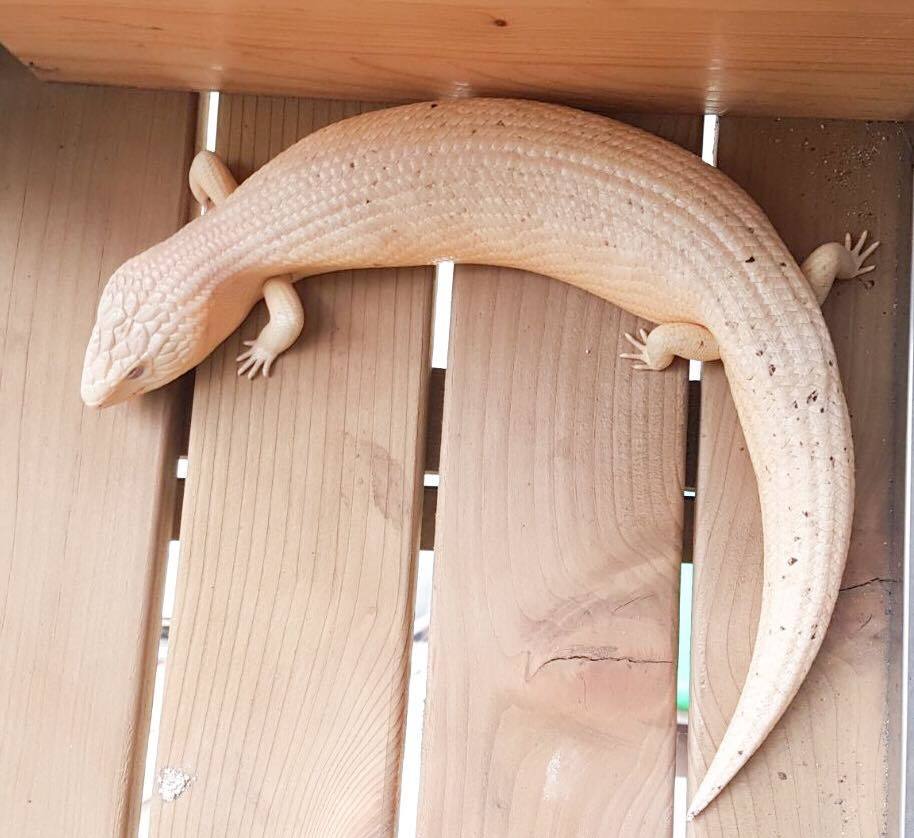 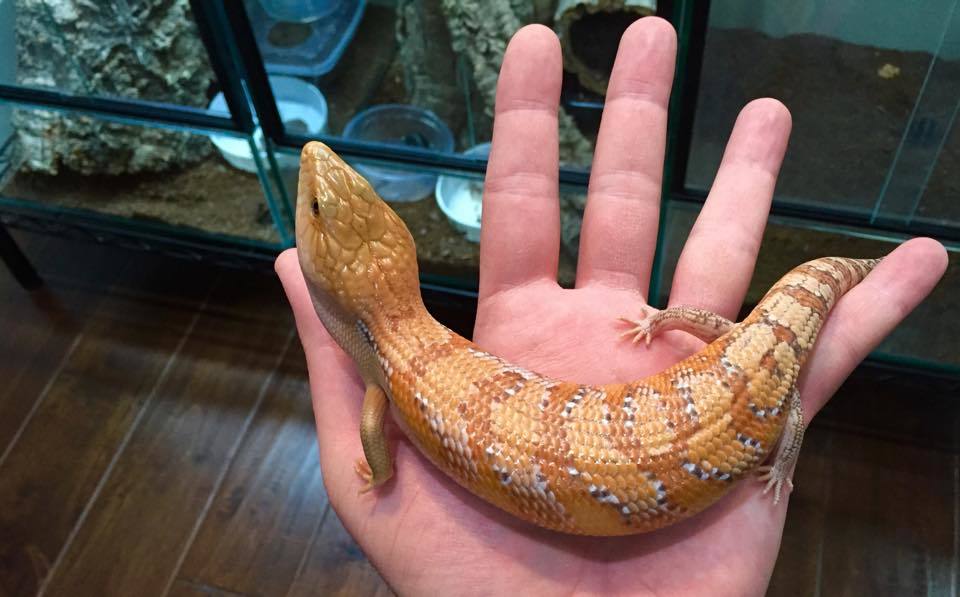 The Orange blue tongue skink is a Northern variety that is bright orange with peach orange or yellow colorations. The stripes are dark and can be found on the back and sides. The belly of these skinks is a creamy color, much lighter than their backs, sides, heads and tails. 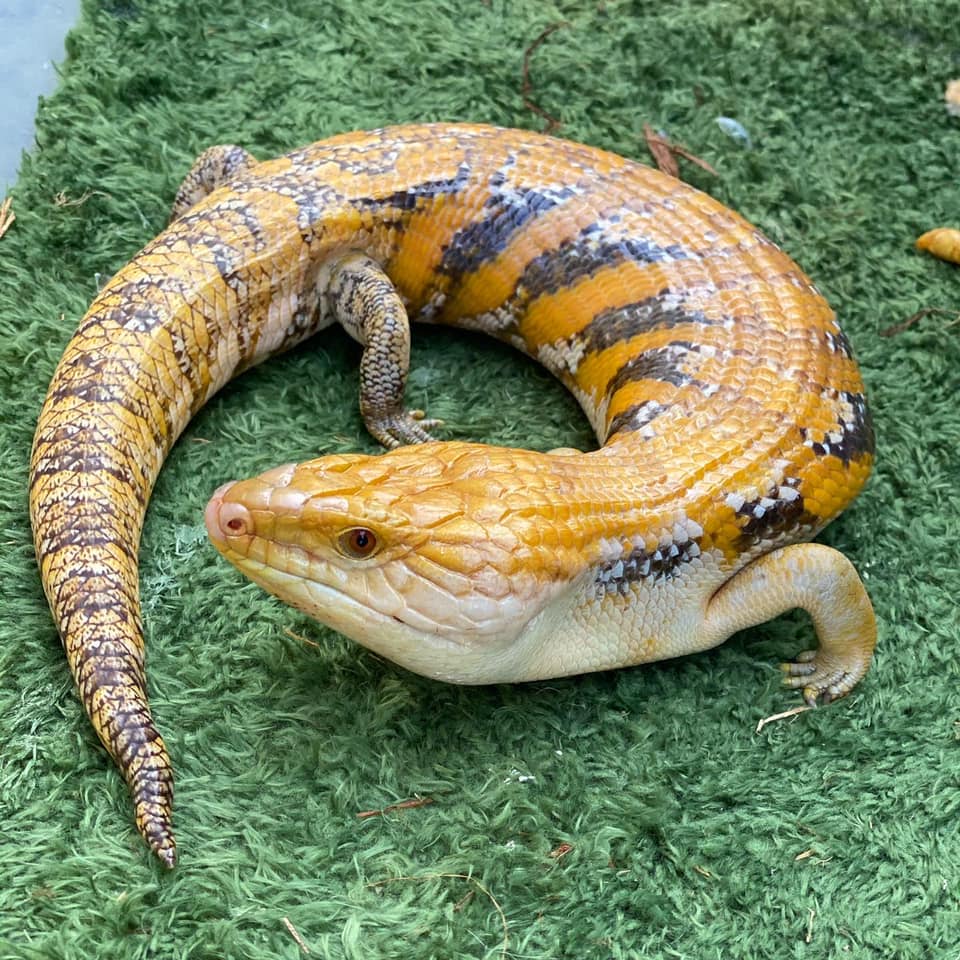 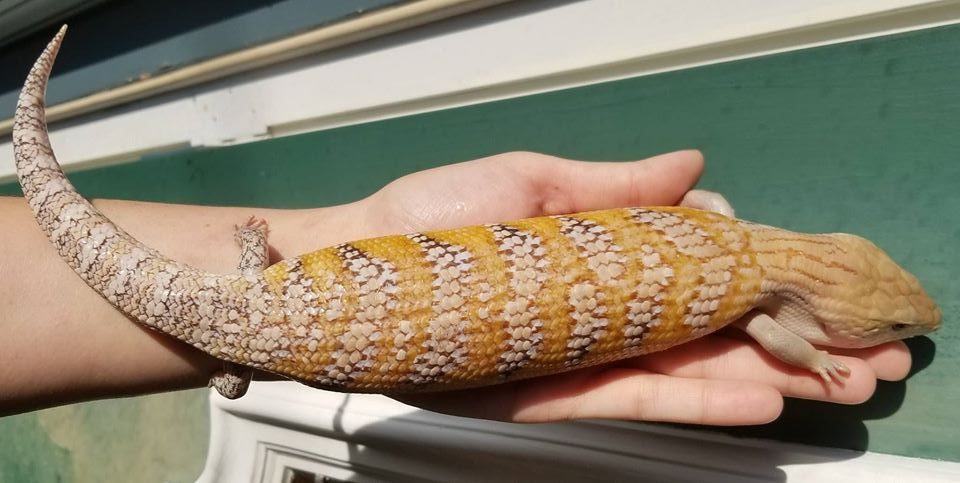 This is a beautiful skink with stripes down the side of body, that is lighter in color across the back. The sunrise skink is proving a popular choice with reptile enthusiasts.