Tarantulas often make people uncomfortable due to their large bodies that are hairy, but these spiders are in fact harmless to humans, but they can give a painful bite with a mild and irritating venom.

They have become popular pets, but there are some aggressive species which are not suitable for the beginner tarantula owner.

Unfortunately, there is no scientific evidence that identifies the more aggressive and defensive tarantula species. The list of 18 most aggressive tarantulas has been researched through different tarantula owners on social media platforms and tarantula forums.

A male and female Cyriopagopus lividus in courtship

The Cobalt Blue Tarantula comes from Myanmar and is considered a medium-sized tarantula with a leg span of around five inches (13cm).

They have blue legs with females and males looking the same until the final molt when males start taking on a lighter tan coloration.

Over time females grow larger than the male.

They spend their time in deep burrows in the tropical rainforests of Southeast Asia.

Note these tarantulas are common in the pet trade, but they are highly defensive, very fast, and will bite with a potent venom, which can cause inflammation and muscle cramps.

This tarantula comes from Southern Africa, mostly from Lesotho and Botswana, where they can reach around 5 inches in body length.

They are ash gray to black in color with a black foveal horn.

They are one of the common tarantula pets kept in captivity, but they are very aggressive and exceptionally fast.

They eat a host of insects and worms.

In captivity, these tarantulas can live up to 12 years. 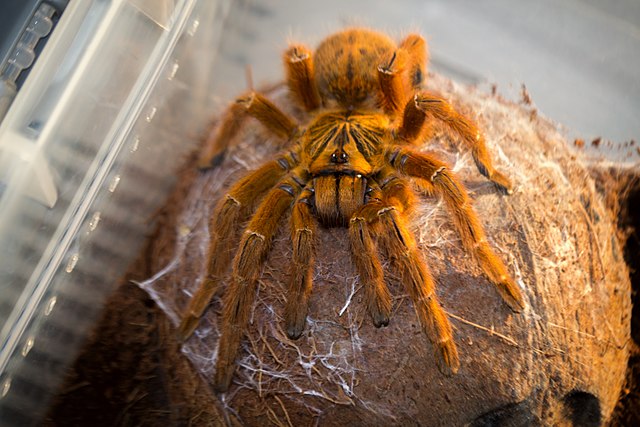 This tarantula species can be found in Angola, Africa.

It is one of the baboon spider subfamilies. The name translates to orange baboon tarantula but is also known as the Mombasa Golden Starburst tarantula. This species is highly aggressive and should not be held.

It will bite and while not serious, the bite can be exceptionally painful.

Females can grow up to 6 inches, while males are smaller at around 4 inches.

Their belly, carapace, and legs have the same color, but the legs have colored rings. There are five color variations, each color comes from a different geographical location.

It is only recommended to keep this tarantula as a pet if you have extensive and prior handling experience in handling venomous spiders.

This tarantula is also known as the Gooty Saphhire Ornamental tarantula and is the only blue species in the Poecilotheria family.

It has a fractal-like pattern on the belly.

They are considered endangered by the IUCN.

They are the only species in the family with blue hair, which increases in color as the tarantula ages.

Males tend to be more slender than the female with longer legs.

In nature, these tarantulas live in the holes of trees where they make tunnels of webs.

They will try and flee first, but when provoked, they will give a painful bite.

While there have been no recorded deaths due to a bite from this tarantula, it is medically significant, due to the intense pain the bite can cause, which is why this species is not recommended for beginner enthusiasts.

The Skeleton tarantula is native to a number of South American countries, known for its skeletal markings on the legs.

Adult males can grow up to 4.5 inches with females growing to around 6 inches.

They have black legs, brown abdomens, and a coffee-colored carapace.

They are very fast and aggressive, which makes them best suited for experienced tarantula pet owners.

This species is native to Brazil and a common pet.

They have black bodies and legs, which may be slightly lighter in color. They also have bright white bands on the legs.

Males are smaller than females and they also have less coloration. This is a large species with the body reaching 3.5 inches.

These are considered prized pets due to their size and coloration, but they are very defensive and will bite if provoked.

This species is better known as the Bahia Scarlet, which comes from Brazil, growing up to 10 inches with dark red hairs on the belly.

They are very defensive and aggressive and not very tolerant. They are active and fast-growing, preying on reptiles and insects.

These are popular tarantulas, considered monsters in size.

They have enormous fangs, which give you good reason to be cautious if you intend keeping one of these as pets.

This tarantula is commonly known as the Thailand Zebra Leg Tarantula, which is found in Myanmar, Cambodia, and Thailand.

It spends the majority of its time in a burrow and has white stripes down the leg and a zigzag pattern on the belly.

They are nervous, skittish, but very defensive and aggressive.

Their only defense is to bite and flee, they are also known for their venom, which is more potent than the other species.

This is a large tarantula from Singapore and Malaysia that is known for growing more than nine inches across.

They have bright blue legs with a gold to brown carapace. Males are not as colorful as the female.

They are common pets due to their beautiful coloration, but caution must be taken as they are an aggressive species and will bite as their first choice before trying to flee.

This tarantula has a body length of 2.5cm with females being larger. It is also the largest of all the spiders in Israel with coloration varying between brown, black and gray.

They have tiny hairs covering their body, which looks velvet.

They are mostly active at night and can be found hiding under rocks.

If the spider feels threatened, it will lift its front torso and swing its feet, exposing the red on its mouth and claws. If the threat continues, it will bite.

While not dangerous to humans, they can give a very unpleasant and painful bite. Not recommended for beginner tarantula owners.

The Kilimanjaro mustard baboon spider can be found in Eastern Africa.

It can grow up to five centimeters in body length with a leg span of 15 centimeters.

It is fairly aggressive and is not recommended as a beginner tarantula pet.

They come from humid and hot scrublands and hilly terrain. They dig elaborate burrows and tunnels in substrate.

This is considered an Old World tarantula species first described in 1899. They are native to West Africa, found in Ghana and Togo.

They reach their full size by three years and can grow up with a leg span around thirteen centimeters.

They are chalky white in color with black and brown markings and thick rear legs.

They are fast, aggressive, and have a potent venom.

They do not have urticating hairs, which means that their bite is their first line of defense.

The Goliath bird eater, native to Guyana and Brazil with a carapace reaching a length of 4cm and a width of 3.7cm.

They have long legs and heavy bodies.

Their color ranges from brown to burgundy or dark brown with red on the legs and belly and white lines on the legs.

They build tunnels under the ground where they hide.

They are nocturnal, which means they come out at night and they tend to be defensive when threatened.

They will rear up, expose their fangs and use the back legs to flick the hairs from the belly, which cause irritation to the skin of their predator.

It will bite with the fangs as a last resort, which is why they are not recommended for beginner pet owners.

This tarantula comes from Brazil, Venezuela, and Guyana where it is known as the Venezuelen Suntiger.

They are unique with black colors and vibrant orange chevrons and marketings on their legs.

They are exceptionally defense and do not enjoy being disturbed. They are fast and can escape very quickly.

Females can reach 6 inches in leg span with males having thinner legs.

The Colombian giant tarantula grows up to 8 inches and can be found in the Colombian tropical rainforest’s where it feeds on crickets, insects, and lizards.

These tarantulas are known for their highly defensive behavior.

While they are very interesting and docile, they are defensive and bob up and down as a first warning. While bold, they can be skittish and bolt to safety without warning. 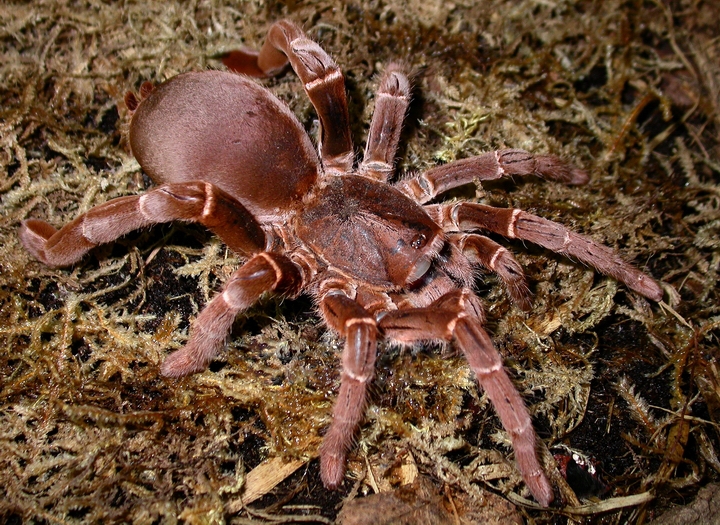 The king baboon spider comes from east Africa and was first described in 1885. They can be found in Kenya and Tanzania.

They are brown to orange in color. They are slow-growing and can reach a 20 centimeter leg span. They use their thick back legs for burrowing.

While they are popular pets for the experienced hobbyists, they are very defensive and not suitable for beginners.

Their venom is strong and while not deadly to humans, it can be painful and itchy for days after a bite.

This tarantula is one of the most common tarantulas available in European and American pet stores.

Females can live for up to 20 years with a natural habitat of scrub regions and deserts.

They enjoy a diverse diet of insects, beetles, worms, lizards, and small mammals.

They are affordable and low maintenance, but they can become very aggressive if you handle them too frequently.

Their first line of defense is to run away, but they will defend themselves with a painful and uncomfortable bite.

They are known to be very defensive after molting. 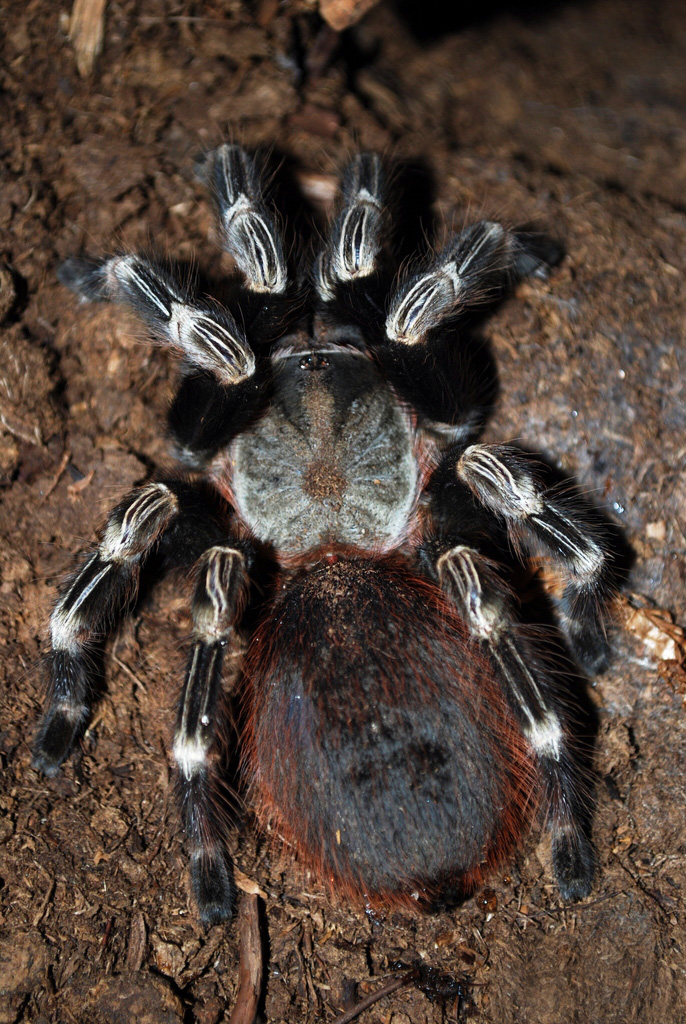 This is a large tarantula that has a diagonal leg span of around 6.7 inches.

They are known for their white striped legs and red hairs on the opisthosoma.

Males and females look the same until they reach sexual maturity, where males become duller in color.

They come from tropical rainforests and savannas in Brazil and are fairly common in the pet trade, even though they are defensive and aggressive and should not be handled unless by someone with experience with these spiders.