Tarantulas can be found throughout the world, though the majority come from the Central and South American jungles. There are numerous species with each species looking different, which is why they have become such popular pets.

With their large size and hairy bodies, they have become in demand with exotic pet enthusiasts.

Arboreal tarantulas are tree-dwelling with some being suitable for beginners, while others are best left for the experienced owner. Interesting in an arboreal tarantula, continue reading to see which one will be the right match as your new pet.

The caribena laeta is better known as the Puerto Rican Pink toe tarantula, which is very unique with a blond appearance.

It is more aggressive than the other pink toe species but tends to be smaller, growing to 12 centimeters as adults. These are shy spiders and seldom come out during the daytime.

They need plenty of structures to create their webs and plants for shady spaces. They should have high humidity with good ventilation. A habitat that is too wet, warm, and humid can kill your pet.

The Caribena laeta is suitable for beginners.

They are one of the fastest tarantula species and are able to move quickly, even as slings.

They are sleek in appearance with a silky appearance.

Juveniles and those freshly molted tend to be dark purple to violet in color with gold sheen over their bodies. When they’re older, the golden overlay becomes more prominent over the purple.

While they are New World species, they are more like Old World and do not have urticating bristles, but be warned their bites can be painful, though their venom is considerably weaker than the Old World species.

This tarantula is suitable for beginners, offering an excellent introduction into learning how to manage behavior, temperament, and speed. 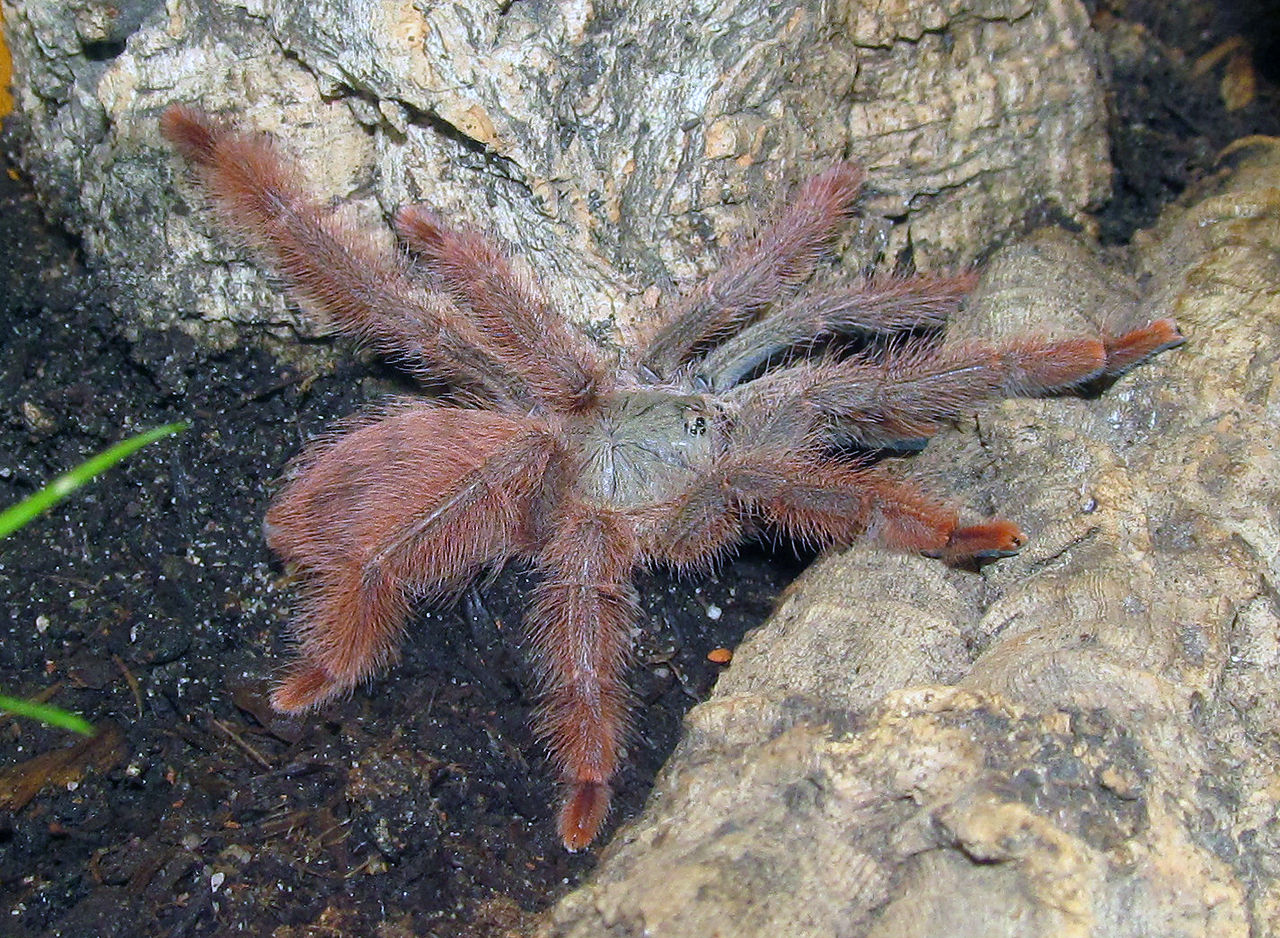 Also known as the Orange Tree Spider is the fastest tarantula, able to move at lightning speeds. This New World species acts more like an Old World without the urticating bristles, but with a painful bite.

The Orange Tree Spider is suitable for intermediate tarantula owners who want to own an old world tarantula, offering an excellent introduction into the species, helping new owners manage their temperament, behavior, and exceptional speeds. 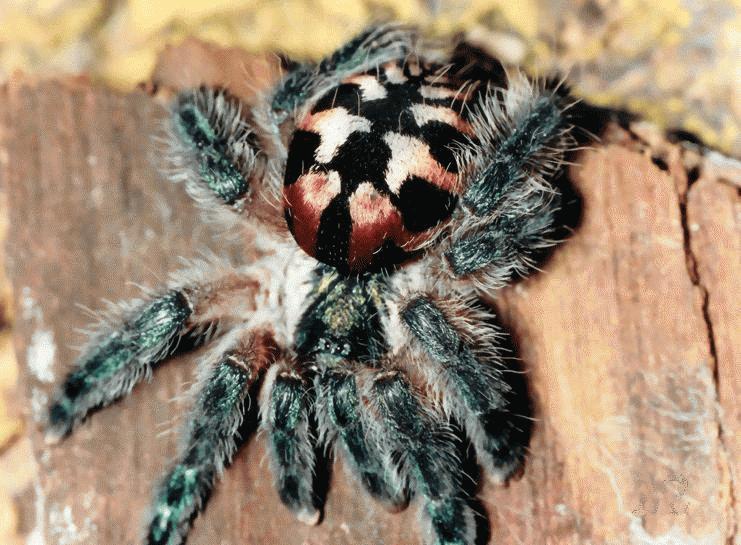 It is one of the most beautiful tarantulas and very attractive to hobbyists.

They are a dwarf species, which means they don't grow more than a few centimeters.

They are arboreal tarantulas, but will also create a shelter in a dead tree or near the ground.

This species is best suited for intermediate to advanced tarantula hobbyists and not beginners, due to their sensitivity when smaller, where the incorrect habitat could kill them.

It not only grows fast, but it grows to a large size with a small body and long hairy blue legs.

It is a fast mover and is shy in nature, spending most of its time in arboreal shelters.

They are great eaters of any age and will seldom turn down a meal, which is why they grow at such an alarming rate.

They have a painful bite and should be respected.

Suitable for advanced hobbyists. As an Old World tarantula, it is not recommended for beginner or intermediate hobbyists. Their bite can be painful and the venom can be anything from mildly irritating to absolutely agonizing.

The Venezuelan Sun Tiger is a very attractive New World tarantula in black with orange accents.

Even though it is a New World tarantula species, it is more like an old world without any urticating hairs and a wicked venom.

They have very hearty appetites and grow at a rapid rate. They make webbed structures where they hide with a manageable temperament.

They are unpredictable and skittish and can become defensive or aggressive if provoked. Be careful, this tarantula does jump.

The Venezuelan Sun Tiger is only suitable for advanced hobbyists as it has a medically significant venom, which can cause discomfort and pain, maybe even requiring hospitalization based on the severity of the bite. 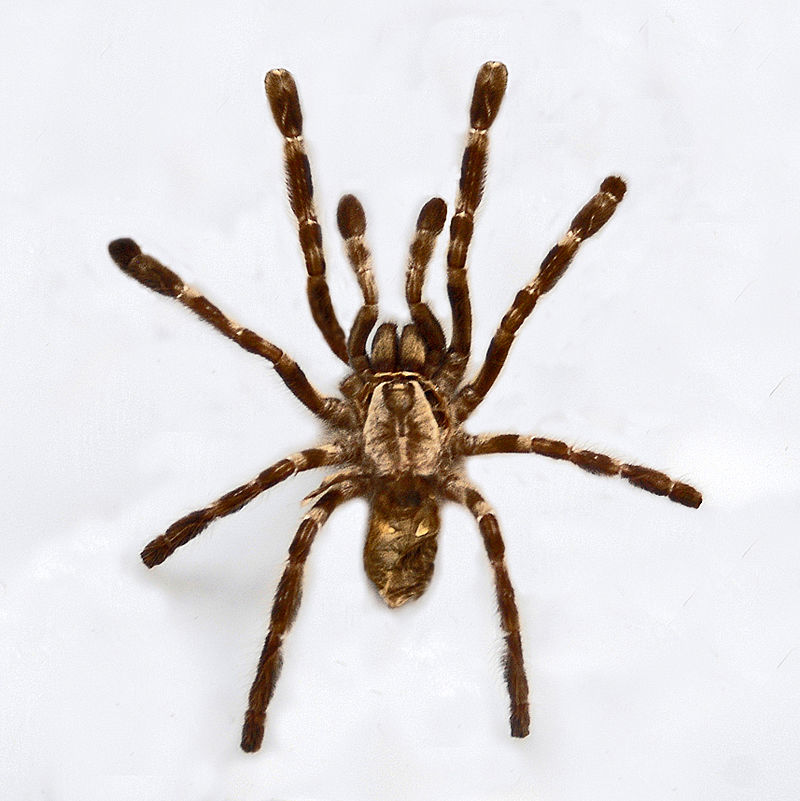 The Poecilotheria vittta is a large tiger species with a dark triangular stripe on the femur of the fourth pair of legs.

This tarantula is easier to keep and doesn't pack such a powerful venom, even if it does bite.

This species is suitable for the beginner hobbyist that wants to learn more about the species and learn how to manage them properly before moving onto more venomous and aggressive species. 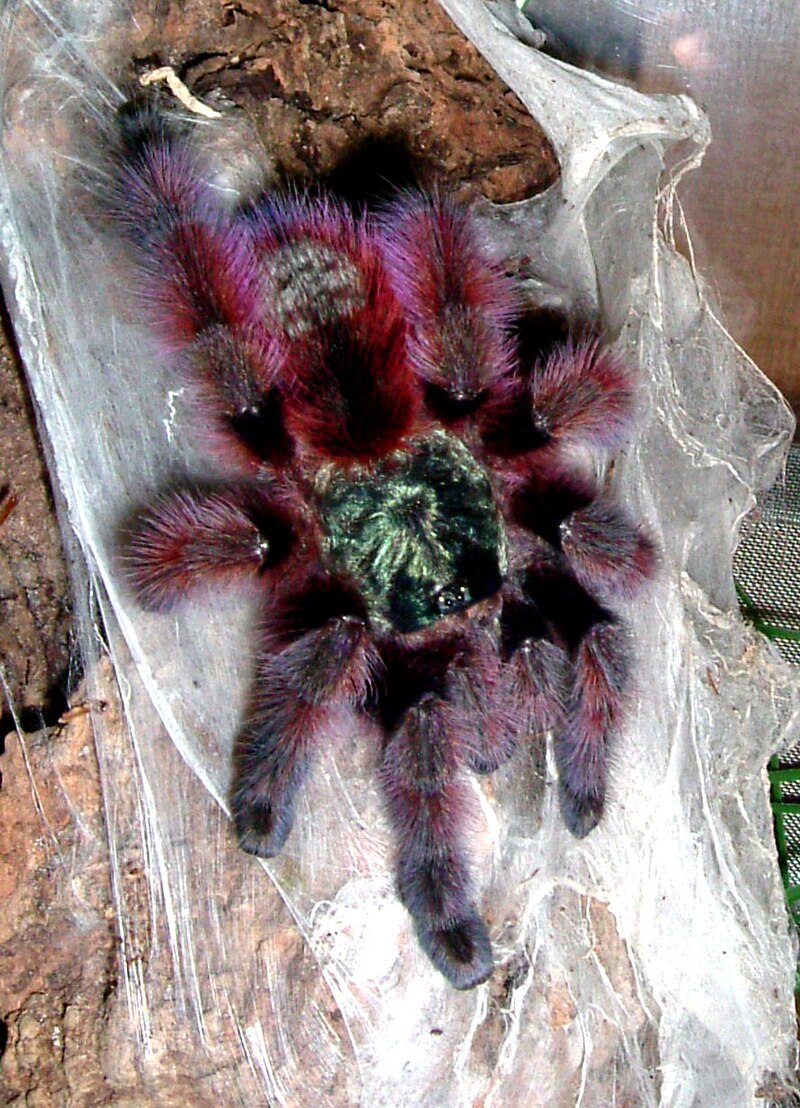 This is a really docile species and easy to won. They are fun to watch, good eaters, and grow at a good rate.

Suitable for beginners with their docile natures. 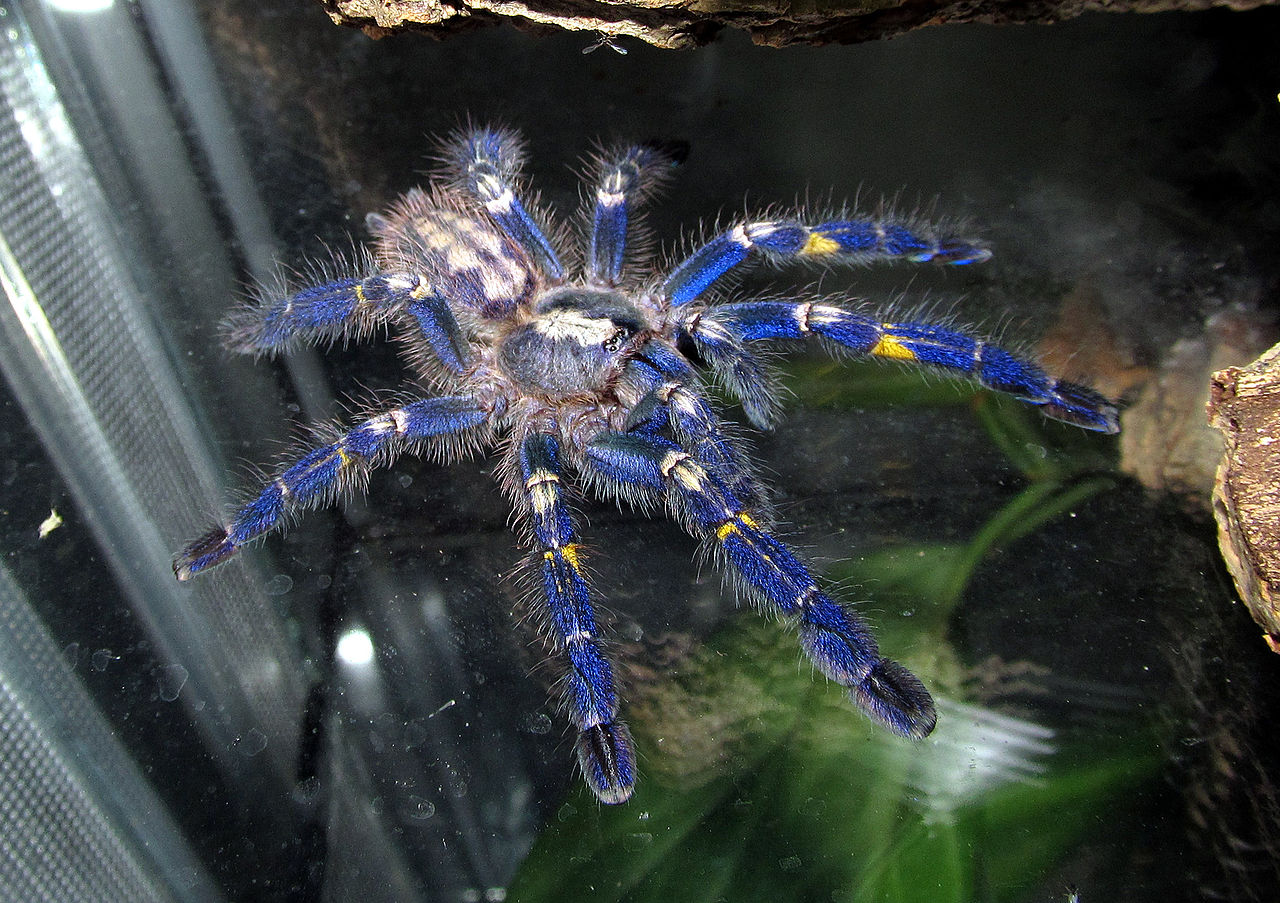 Poecilotheria metallica is completely covered in blue hair with the coloration becoming less vibrant with age.

They are arboreal tarantulas. In the wild, they live in tall trees making asymmetrical funnel webs where they catch flying insects. They do live communally in some territories.

They are skittish and will try and run and hide at first. They are tarantulas and will defend themselves with a bite if provoked.

Females can live up to fifteen years, while males tend to live for four years.

This tarantula is suitable for advanced hobbyists due to its involved husbandry requirement, exceptional speed, and medically significant venom.

The Red Slate Pink Toe is a docile and adorable tarantula species to own with excellent feeding responses. These tarantulas are arboreal and rewarding to keep.

They do make heavy webs, which means they require plenty of plants and structures that they can create their webs on. They also require high humidity with excellent ventilation.

This species is an excellent beginner tarantula with its docile nature and adorable personality. 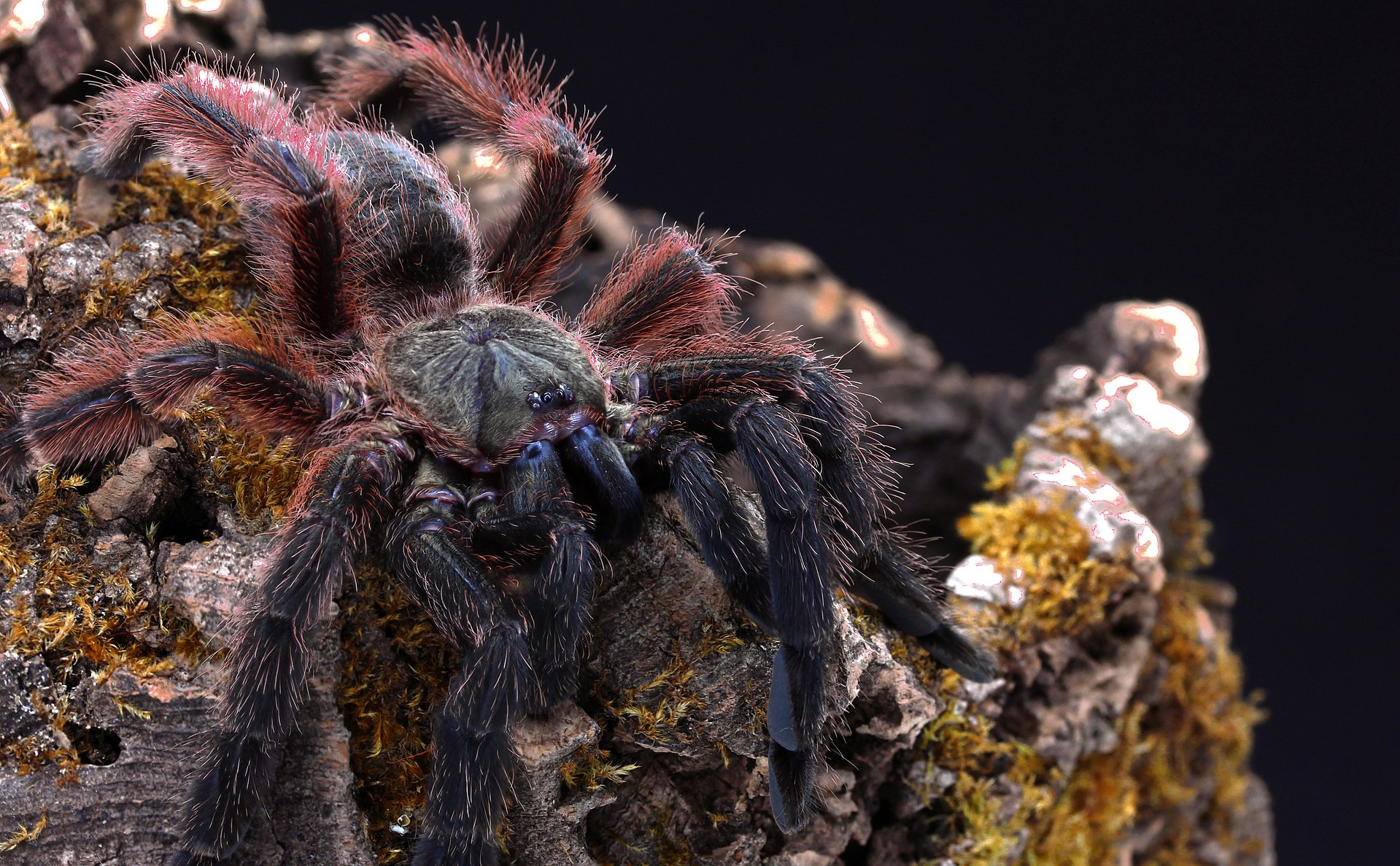 Common name: Mexican Half and Half, Darth Maul Tarantula.

This tarantula is known as the Mexican Half and Half or the Darth Maul Tarantula and is the first arboreal tarantulas that were described in Mexico.

Males are smaller than females and gray in appearance.

Slings tend to be dark grey with a red glow.

Even though they are a New World species, they are Old World in the definition. They do not have urticating hairs, but they do have potent venom.

This species is ideal for beginners.