Many people are scared when they come across a scorpion in their home or yard. There is only one scorpion you may encounter in Oklahoma, the striped bark scorpion.

Continue reading to learn the 5 important facts you need to know about scorpions in Oklahoma.

Types Of Scorpions In Oklahoma

Scorpions can cause fear for homeowners and tenants with their threatening appearance and tail with stinger.

The good news is that there is only one scorpion in Oklahoma, the striped bark scorpion (Centruroides vittatus).

They are easy to identify with four sets of legs and two dark stripes that run down the length of the body. The body is light brown to tan in color. They have a long tail with a stinger and two pincers.

Most scorpions are burrowers, but not the striped bark scorpion. This scorpion prefers hiding under debris, logs, rocks, and vegetation. They also live in buildings, including homes.

They are nocturnal, coming out only at night, seeking somewhere cool to hide during the day, which is why they frequent homes.

The striped bark scorpion eats insects, including spiders, flies, and centipedes. They use their venomous tail to inject their prey, immobilizing them while they eat them.

The striped bark scorpion is not a venomous scorpion, its venom is not enough to cause serious medical harm to a human.

It's important to note that a scorpion would rather run away and hide than sting you. They only sting when they feel threatened or they are provoked.

Thousands of people are stung by the striped bark scorpion every year. It is a very painful sting that caused swelling, redness, and itching.

It is dangerous to those that experience an allergic reaction to the venom, the same as you would with a bee or wasp sting. This needs urgent medical treatment.

Signs of allergic reaction include shortness of breath, wheezing, and swelling of the face and throat.

The symptoms of a sting from a striped bark scorpion usually lasts up to 48 hours and can be relieved with an ice pack, which is placed directly on the sting area to reduce swelling and discomfort.

Where To Find Oklahoma Scorpions?

The striped bark scorpion lives in a variety of habitats from forest regions to deserts and grasslands. You can usually find them under a rock, surface debris, and vegetation, as well as in old sheds, barns, and in houses.

At night, these scorpions can be seen hunting for prey in vegetation and on the ground.

They can also be found inside the home, usually in small crevices and cracks in walls, attics, and basements. They are attracted to the bathroom and kitchen areas where they have access to water.

When temperatures rise, you may find the scorpions move into your living areas to get to the cooler area of the home.

Note that you may sometimes see scorpions in swimming pools or plumbing. Scorpions can not swim but they can survive in the water for up to 2 days. 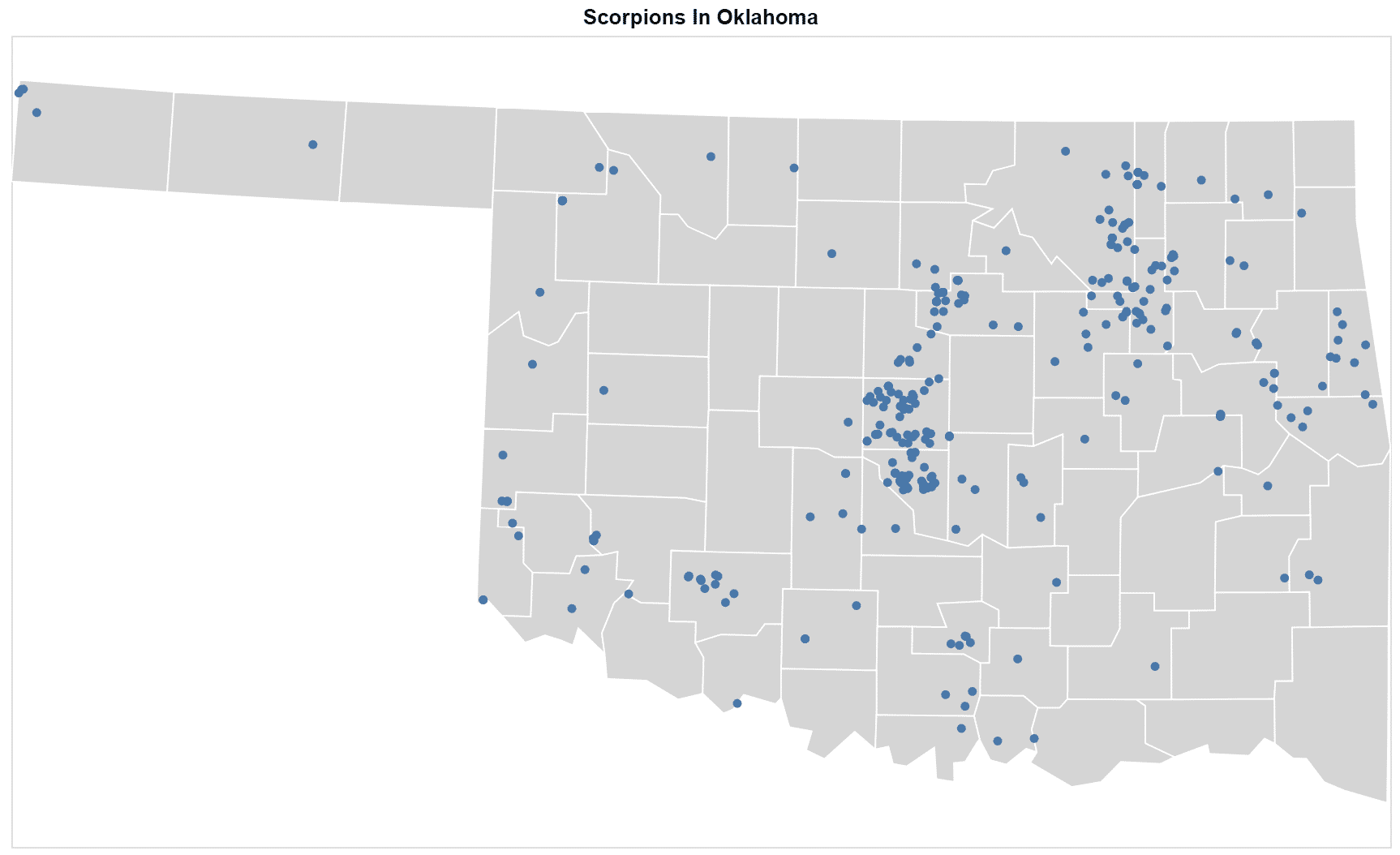 Scorpions require warm and dry environments. Due to the dry weather conditions in Oklahoma, it's almost always scorpion season.

Their activity can be impacted by the mating season, construction, and monsoons, which is why observations are more common during July and August.

The three things you can do if you see a scorpion include:

If you see a scorpion in the wild, the best thing to do is leave it alone. Even if you accidentally lifted a rock it was hiding under, the likelihood of the scorpion rushing off for cover is higher than it attacking you.

In the wild, walk away and leave the scorpion to go about its business. Do not provoke it to see what it will do.

If you have a dog with you, keep the dog away from the scorpion and keep it on its leash until you are a good distance away.

It's not uncommon to have at least one scorpion in your Oklahoma home at some point. The best option is to catch and release.

Once you have it trapped, turn the container or jar over and carry it far from your property. Release it back into the wild. 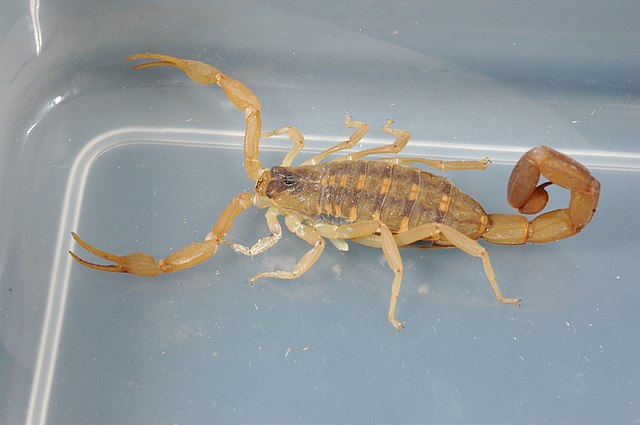 Catching a scorpion with a plastic container

Due to the fact that scorpions can get into the smallest crevices and cracks, they also get into your foundation and can become a pest.

If you experience regular scorpion visits, then it may be worthwhile calling your local pest control and asking them to investigate.

How To Get Rid Of Oklahoma Scorpions

Prevention is better than having to kill a scorpion. If it accidentally gets in the home, it isn't there to cause harm. A scorpion in the home is looking for somewhere cool to hide during the day.

Interestingly, a scorpion on your home represents letting go of old and making room for new, it means that good luck is on the way.

There are a number of ways to rid your home of scorpions, these include:

Scorpions will glow under ultraviolet light

While you may encounter a scorpion in the home or the wild in Oklahoma, they are not something to worry about unless you provoke them.

You can ignore them or remove them with care. Use preventative measures to reduce the risk of having a scorpion in your home.