Scorpions in Georgia: Facts You Should Know

Most people are afraid of scorpions with their sharp pincers and stinging tail, but most scorpion species are harmless to humans. Scorpions can be found in Georgia.

Knowing the types of scorpions, whether they are dangerous and how to prevent them from coming into your home can be beneficial. Continue reading to find out more.

Types Of Scorpions In Georgia

There are 4 types of scorpions in Georgia. They are:

The southern devil scorpion is the most observed scorpion in Georgia, belonging to the Vaejovidae family.

This scorpion is not deadly, but will still give you a very painful sting if it feels threatened or is provoked. The tail injects venom, causing the sting area to become sore and red, which can last a few days.

Allergic reactions are more of a concern and require urgent medical treatment.

The scorpion sting is used to subdue their prey, enabling them to eat them easily.

The southern devil scorpion is solitary and hunts and lives on its own. They are nocturnal and burrowers, which is why they are not often observed unless you accidentally come across one in your clothing or home.

The Hentz striped scorpion belongs to the Buthidae family.

These are large scorpions with interesting patterns on their bodies. This scorpion can grow up to 3 inches and are tan to dark brown in color with green to yellow stripes on the midsection.

They are usually encountered by lifting stones or debris from the ground. 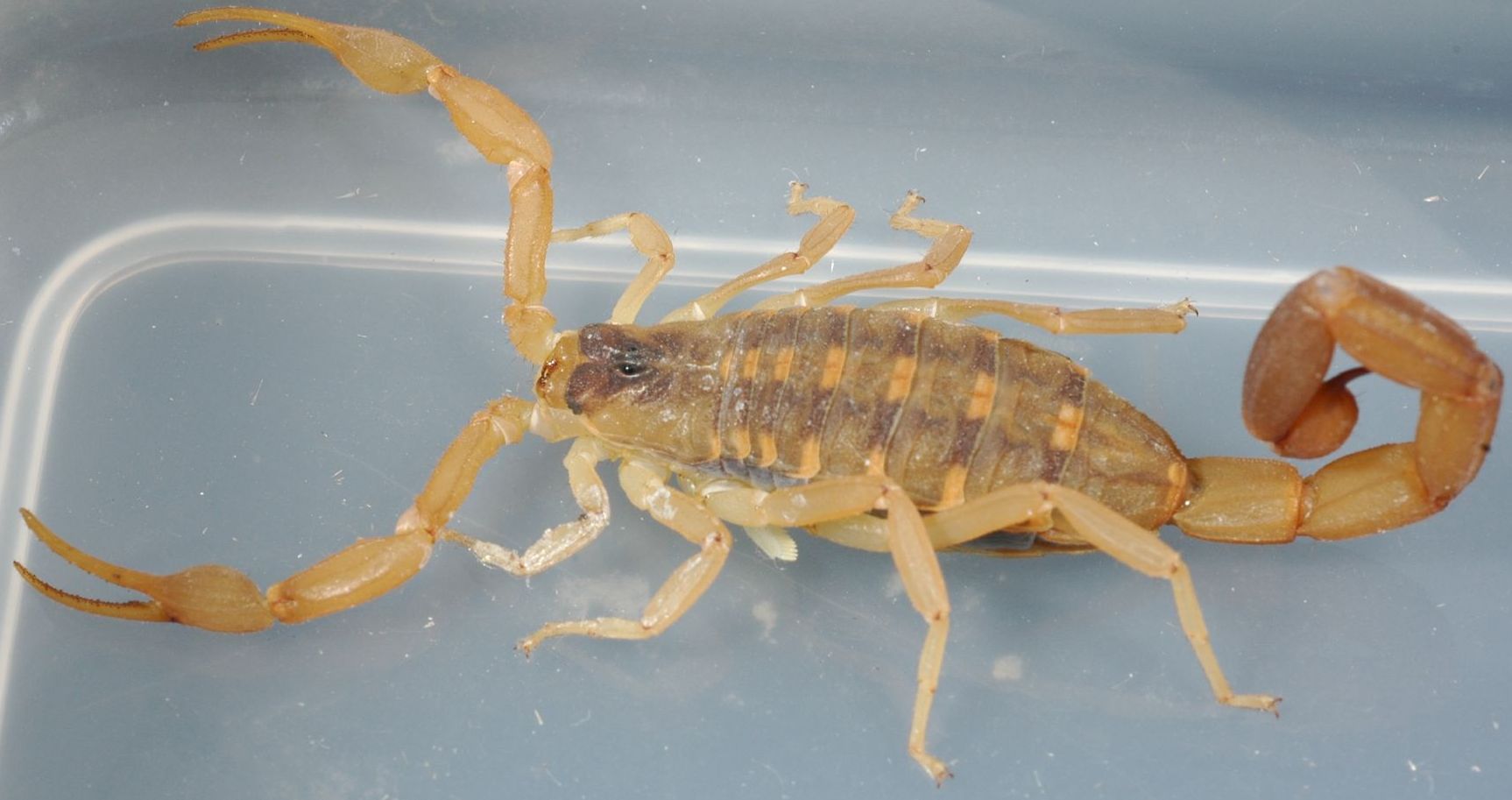 The striped bark scorpion lives in a range of habitats, both indoors and outdoors.

They are bark scorpions, which are nocturnal, preferring damp and cool areas, often found hiding under fallen locks, rocks, and inside homes.

This scorpion can grow up to 3 inches with the tail being longer in males than in females.

Their bodies range from tan to yellow with younger scorpions being lighter in color. They have two broad black stripes on the abdomen and a dark triangle on the front of the head. 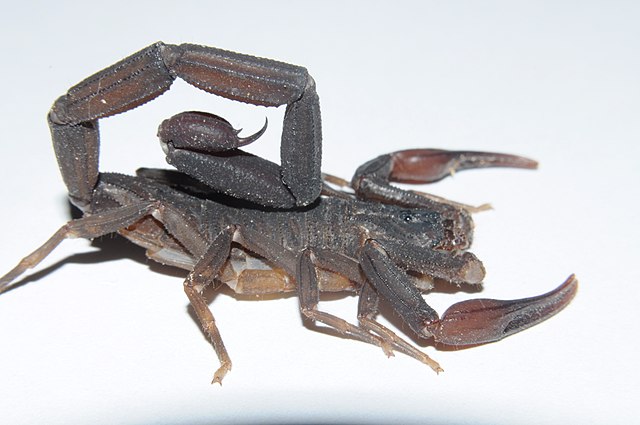 The slender brown scorpion also belongs to the Buthidae family of bark scorpions.

Females can grow up to 10 centimeters, while males are larger at around 15 centimeters with colors varying from red to dark brown. They have yellow on their legs.

They prefer living under rocks and bark. They will move into property walls and rubbish piles.

While they have a venomous toxin, it is not as toxic as some of the other scorpions.

Local effects of a sting include redness, swelling, pain, and itching, which disappears after a few days. Allergic reactions are serious and require urgent medical treatment.

The good news is that the scorpions in Georgia are not dangerous and their sting is no worse than a wasp sting.

In the event of a sting, apply a cold compress to the area for relief from the symptoms associated with the sting.

If your face or throat swells or you experience a rash, then seek medical treatment for a potential allergic reaction, which can be fatal, the same as an allergic reaction to a bee or wasp sting.

Where To Find Georgia Scorpions? 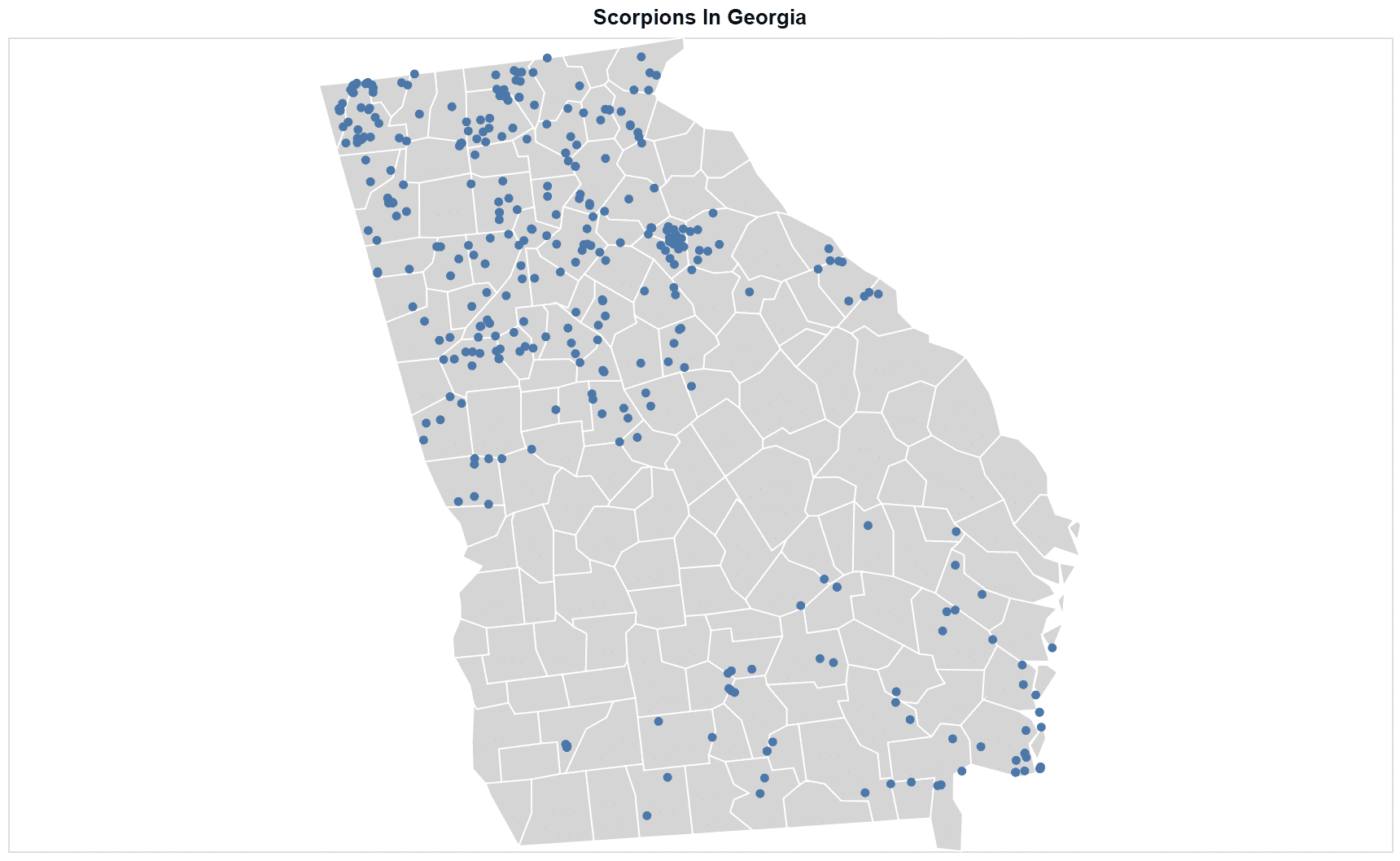 The scorpions in Georgia are mostly observed in north and central Georgia. They can both be observed in the Piedmont region.

The best time to find scorpions is at night when they come out to hunt for prey. You may also find them by carefully lifting rocks or tree bark, where they hide underneath during the warmth of the day.

If you come across a scorpion in the wild, simply leave it alone.

The problem is when you find one in your home. The first step is not to panic. The scorpion is more scared of you than you are of it. It will not attack unless it feels threatened or it is provoked.

If you experience scorpions in your home regularly, then keep a dustpan and broom handy. They are mostly found in attics, basements, kitchens, and bathrooms.

Simply sweep the scorpion into the dustpan or into a container. Wear gloves to reduce the risk of being stung.

In the event, you find a scorpion on the wall, sweep it onto the floor and into a container. They have very tough exoskeletons, so they should survive the fall. Empty the dustpan or container outside.

It's not uncommon to lose sight of a scorpion in your home, as they are going to try and get away from you and hide. You can use black light. Their exoskeletons will light up for a short period under UV light.

You may sometimes see a scorpion underwater such as in a swimming pool or in the sink. Can scorpions swim or live under the water? Find out here.

How To Prevent Scorpions

Prevention is always better than removal and if you live in an area where you have frequent scorpion visits, then you may want to consider the following preventative measures:

While there are 4 known species of scorpion in Georgia, chances are you will seldom come across them, unless you find them in your home. Being nocturnal, they only come out at night, which means that they are not often seen.

It's recommended that you shake out clothing and boots before putting them on, as scorpions can get into a host of different areas, including tangled in clothing or hiding in the darkness of a boot, which increases the risk of being stung.