There are 15 tree frogs identified in North Carolina. Not all species live in trees, some prefer shallow waters, even though they are known as tree frogs.

The comprehensive list below will help you identify these frogs, whether in your yard or you've seen them when out walking in nature. The 15 species of tree frog you may encounter in North Carolina include:

The Northern cricket frog is one of the species of tree frogs that do not live in trees. These small frogs are one of the smallest vertebrates you will find in North America. They grow to 1.5 inches (3.8cm) in length.

Their colors range from green and brown to gray with triangular patterns. They usually have some dark bands on their legs with a white bar that runs from the eye to the foreleg.

The Northern cricket frog is active most of the year, except when the water freezes during mid-winter.

They can jump at excessive distances of up to 3 feet when escaping predators. They are also brilliant swimmers.

These small frogs with wart-like skin can grow up to 3.5cm in length with a variety of colors and patterns. They range from green to brown and gray with a brown to orange stripe down their back with a triangular mark on their heads.

You are more likely to find these frogs in moist areas where they are close to a permanent water source. They enjoy shallow waters with ample vegetation.

They are not great climbers, so when they do climb trees, they don't climb very high. You may hear them calling, which sounds like the sound marbles make when they click together.

This is known as a New World tree frog and is not often seen due to their habitats being destroyed.

They grow to around three inches (7.6cm) in length and are green with wide stripes. Some have orange to gold spots on their legs. They can be easily identified by the lavender stripe with white bordering that runs down the side of the body.

These frogs can be found in brush areas, close to shallow ponds, and bogs. They prefer areas that have thick moss.

This frog is often known as the common gray tree frog or Northern gray tree frog. They vary in color and are able to camouflage their colors based on the substrate they are sitting on. They can range from gray to brown or green.

They can camouflage themselves from pitch black to pure white, but their color changes considerably slower than a chameleon.

The legs have dark bands which contrast with the orange or yellow on the underside of their arms and legs.

Females have a white throat and do not call, but males which have black, brown, or gray throats during mating season, do call. Females are larger than males.

These tree frogs can survive freezing winters to below 8°C.

They are found in forest areas and will climb high into trees, though they lay their eggs in ponds, fountains, water gardens, and swamps.

The American green tree frog is a New World tree frog that is commonly spotted in back yards.

It is a medium-sized frog that is green in color, growing up to 2.5 inches (6cm) in length.

The green on their body can range from olive to lime color and changes based on the temperature and light. Some have tiny patches of white or gold on their skin with cream color lines that run from their jaw to their groin.

They do not have wart-like skin. In fact, they are smooth with yellow to white bellies.

You can find them where there is plenty of floating plants, such as lakes, marshes, streams, and small ponds. They are found in swimming pools from time to time. 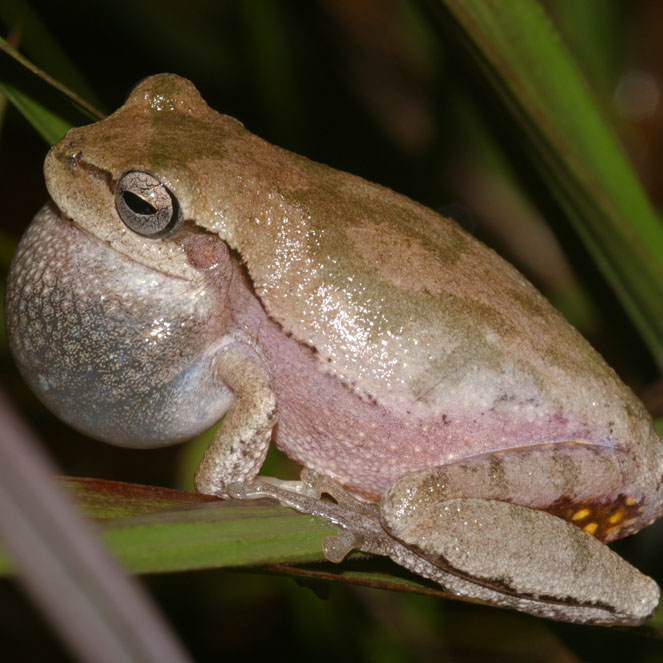 The Pine Woods tree frog is a small frog growing up to 1.5 inches.

They have a tan to brown, gray, or green body with irregular-shaped bands and dark patches. They have a bandit mask on their face.

They have a fast-tapping call that sounds very similar to Morse code.

These tree frogs prefer being high up in the trees in pine flat woods, forests, and cypress swamps.

They breed in shallow waters, where they also lay their eggs. 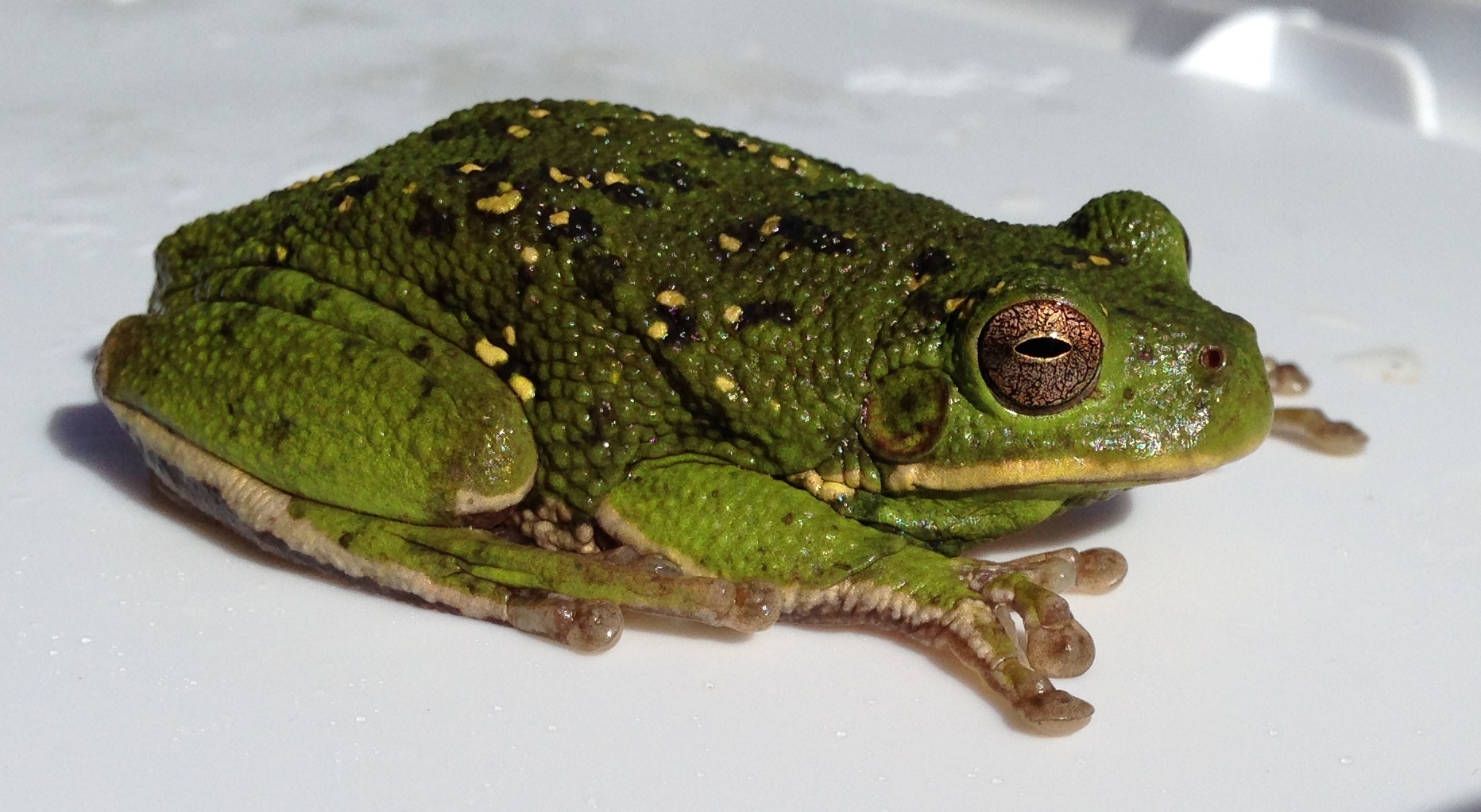 This is the largest native tree frog you will come across in the United States growing to 2.8 inches (7cm) in length.

It varies in color from green to yellow, brown to gray, usually with green to yellow spots. It has leathery skin that changes color based on temperature, lighting, and surroundings.

This is a loud tree frog with a barking call that is often repetitive. They do chorus with other frogs of a similar species.

These frogs will spend their day in the trees and will burrow in sand to escape high temperatures.

The squirrel tree frog prefers moist areas where they can find shelter and food, such as swamps, lakes, streams, and marshes. They are often seen in gardens, woods, and under logs.

These tree frogs often call during or after rain and sound similar to a squirrel chattering.

The Mountain chorus frog is also a small tree frog, growing up to 1.5 inches (4cm) in length.

They are olive-green to gray in color with a distinctive X marking on their backs. They also have a dark triangle between their eyes, which sets them apart from the Spring Peeper.

They also have the typical chorus frog marking, which is a white line on their upper lip.

They prefer being high and are found in woodlands, forest areas, and on hillsides, where there are shallow waters nearby for breeding and egg-laying.

This is a very secretive frog species and is often seen in early Spring when they start to breed when a chorus will get together in woodland pools to call and attract a mate.

Their call is best described as running your finger down the side of a comb.

The Brimley's chorus frog is a tan frog, small in size with a black to dark brown stripe that runs down the side of the body.

There are usually three pale strips on the back with a yellow belly. They do not have the dark triangle between their eyes, which is seen in other chorus frogs.

They can be found breeding in swamps, floodplains, roadside ditches, and marshes from December to April. They have a trill and short call.

The spring peeper is probably one of the better-known chorus frogs due to the high-pitched sound they call at the start of the spring.

They are the first frogs to call in spring and when in a chorus, they can sound like sleigh bells.

They prefer areas where there is plenty of water with shrubs and grasses where they can breed.

Males are very aggressive towards other males.

The upland chorus frog is another of the small tree frogs of North Carolina that grow to 1.5 inches (4cm).

They are gray/brown, red/brown or plain brown in color with dark patches and are nocturnal and very secretive. You may never see them, but you may hear them after rain.

They enjoy a host of habitats that are moist with ample vegetation. They will never be too far from a permanent water supply.

The southern chorus frog is a stout frog with wart like-skin and small in size. They grow to around 1.25 inches and have spotted markings on their skin that help them camouflage into their pinewood habitat.

They are nocturnal and very shy.

They have broken lines of dark spots on the back and legs.

You can find them in pine savannas and forests, where they like to burrow into the soil.

They move to water during the breeding season where males hide in grasses and holes, sometimes submerging themselves in water.

This s the smallest frog in North America and has a dark stripe running through each eye and down the side of the body.

Their main color can be red to brown.

They prefer low-lying grassy areas that are moist.

They are light brown in color, but some have a pink or green coloration to them.

You can find them in marshy swamps, but due to their shy nature, they will remain hidden and out of sight.

The ornate chorus frog grows to 1.5 inches (4cm) in length with their color based on where they live.

Colors range from green and brown to red. They have brown stripes or spots that run from the nose down the side of the body. Their tummy is white with yellow spots that can be found just in front of the back legs.