There are 6 species of tree frog that you may come across during your time in Illinois.

Maybe you're wondering what tree frog your cat brought in from the back yard or what frog you saw when you went for a walk this afternoon.

Continue reading for detailed information on the six species of tree frog you can find in Illinois.

The bird-voiced tree frog in Illinois

The bird-voiced tree frog (Hyla Avivoca) is a very slender tree frog that grows up to 5 cm (2 in). The female is larger than the males.

These frogs have gray-brown backs, the color may change based on background or weather. They have dark patches on their backs with a warty appearance. You will see white spots below the eye with black borders and large toe pads.

Their calls are also different with the bird-voiced tree frog having a bird-like whistle in rapid succession, while the gray tree frog has a repeated trill that is musical in sound.

The bird-voiced tree frog can be found in river valleys, wooded swamps, ponds, lakeshores, and where there is ample vegetation where they can hide and stay secure.

They are tree climbing and will climb high into trees.

The eastern cricket frog (Acris Crepitans) measures up to 1.5 inches or 3.5cm in length. They prefer to live near a permanent water source, such as a slow running stream, ponds, lakes, and marshy areas.

These small frogs are brown, tan, green, or yellow with a large triangle right between the eyes and a rough skin. They have a stripe on the back of their thighs and a rounded snout. They have a shrill call that clicks.

These daytime frogs remain active throughout the year. The only time they slow is activity is midwinter.

They eat insects and are prey to a number of different species.

They can leap up to three feet in one jump and are excellent swimmers, which helps them escape predators quickly and effectively. 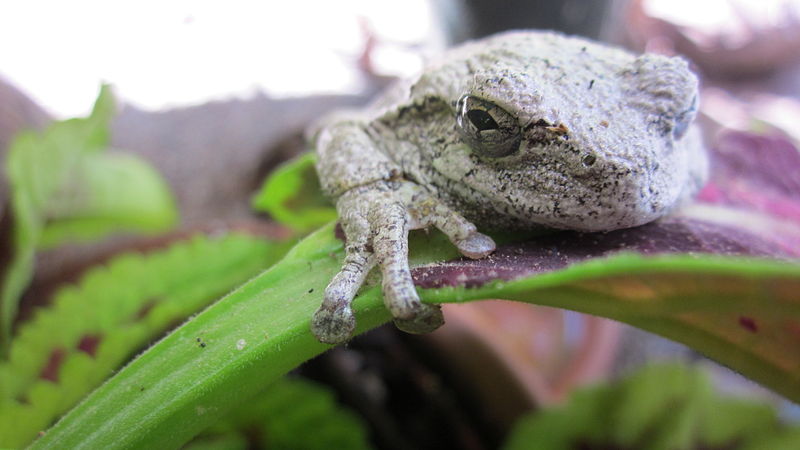 The gray tree frog is popular in Illinois

They are very similar in appearance and habitat, though there are some telltale signs that can tell them apart.

These frogs can be found at any elevation where you find water sources, both temporary and permanent. They enjoy ponds, lakes, swamps and old fields, woodlands, and back yards.

The gray tree frog will grow up to around two inches or five centimeters in length. They have wart-like skin and come in a host of different grays with black patches on their backs.

It's not uncommon for these frogs to change to a green color during mating season.

The male will become very territorial during the breeding season, but are tolerant of other males and females the rest of the year, as long as they are of similar size.

Don't be fooled by a hibernating gray tree frog during the winter months when eighty percent of their body freezes, even their heartbeat can be suspended temporarily.

The male has a loud advertisement call that sounds like a trill, the Eastern Gray Tree Frogs trill is slower than that of the Cope's Gray Tree Frog, which tends t be higher pitched and much faster.

The green tree frog (Dryophytes cinereus) is often found in teams, ponds, lakes, and marshes. These small frogs grow up to two and a half inches in length with females being bigger than males.

Their color ranges from light to dark green and yellow-green with a light-colored belly. These small amphibians have a white to yellow colored stripe that runs down the side of the body, combined with golden spots appearing on the back.

They are prey to lizards, snakes, birds, and larger fish.

They have a nasal bell-like call that is repeated quickly over a minute. When the weather is damp, their call will be louder.

Spring peeper can be found in various places in Illinois

The spring peeper (Pseudacris Crucifer) can be found in Illinois and other areas throughout the United States, they have also been reported in Cuba.

These frogs are often found in lowlands that are near swamps and ponds. They are excellent climbers, though they prefer to be down on the ground, hiding in an abundance of leaf litter.

The spring peeper is a small amphibian that grows up to 25mm as an adult. They range in color from olive to gray and grown to yellow or red. They have a white to cream belly with a dark cross on their backs.

These frogs are only at sexual maturity when they reach three years of age. Females can lay up to one thousand eggs in a shallow pond, which will hatch within twelve days, and tadpoles transforming to frogs within ninety days.

Spring peepers tend to live for up to five years.

They are best known for their high-pitched whistle call, a single note which is repeated at intervals. Mating calls start from early April and May.

They can be found hiding in logs and in tree holes where they enjoy an insect-based diet.

The western chorus frog (Pseudacris triseriata) is a small tree frog that grows up to 1.6 inches or 4cm.

It is green-gray in color, sometimes olive, brown or red. They have three dark brown to gray stripes that extend down their backs. These can be broken or reduced stripes.

Their belly is cream to white in color. They have a single white stripe that runs across their upper lip, with a dark stripe running across the eye. Some of these frogs have a triangular spot on their heads.

Males tend to be slightly smaller than the female. Males also have a yellow vocal sac when they call.

They can be found in a variety of habitats from marches to river swamps and meadows to grassy pols and more.

It’s not very common to see a Western Chorus Frog, as they are secretive and nocturnal, which means they venture out once the sunsets.

Males and some females will call in large choruses, males make certain calls to attract females to their mating area. Their call can be heard from more than half a mile away and is a distance creek that is repeated over twenty times per minute.