Many spiders are afraid of wasps, but there are 20 common spiders that eat wasps, bees, and flies as part of their diet.

Some spiders feed on pollinating insects and if you are wondering what spiders eat bees and wasps, continue reading to find out more.

How Do Some Spiders Capture Wasps, Bees, And Flies?

There are two ways that spiders catch wasps and bees, depending on whether they are ambush predators or they lie in wait in their webs.

Some spiders spin sticky webs, which entangle insects. The spider then moves in, sometimes biting the wasp or bee, injecting a chemical that will paralyze the insect, before they cover them in silk webbing to eat at their convenience.

There are also ambush spiders, that lie in wait in plants and on flowers for pollinating insects to lend. As soon as the prey gets within reach, the spider will lung forward and bite the wasp or bee, while they insert a paralyzing chemical, which restrains the insect, while they entangle it and drag it back to their web to eat in safety.

The twenty common spiders that eat wasps, bees, and flies include:

The yellow garden spider is a black and yellow spider, first described back in 1833.

They are easy to identify with a black and yellow abdomen with an almost white head space.

Their webs are often found in sunny areas where they stay hidden. They also spin their webs along the eaves of houses and in outbuildings.

When a wasp or bee becomes entangled in the web, the yellow garden spider moves back and forth to trap the insect before they insect the venom. 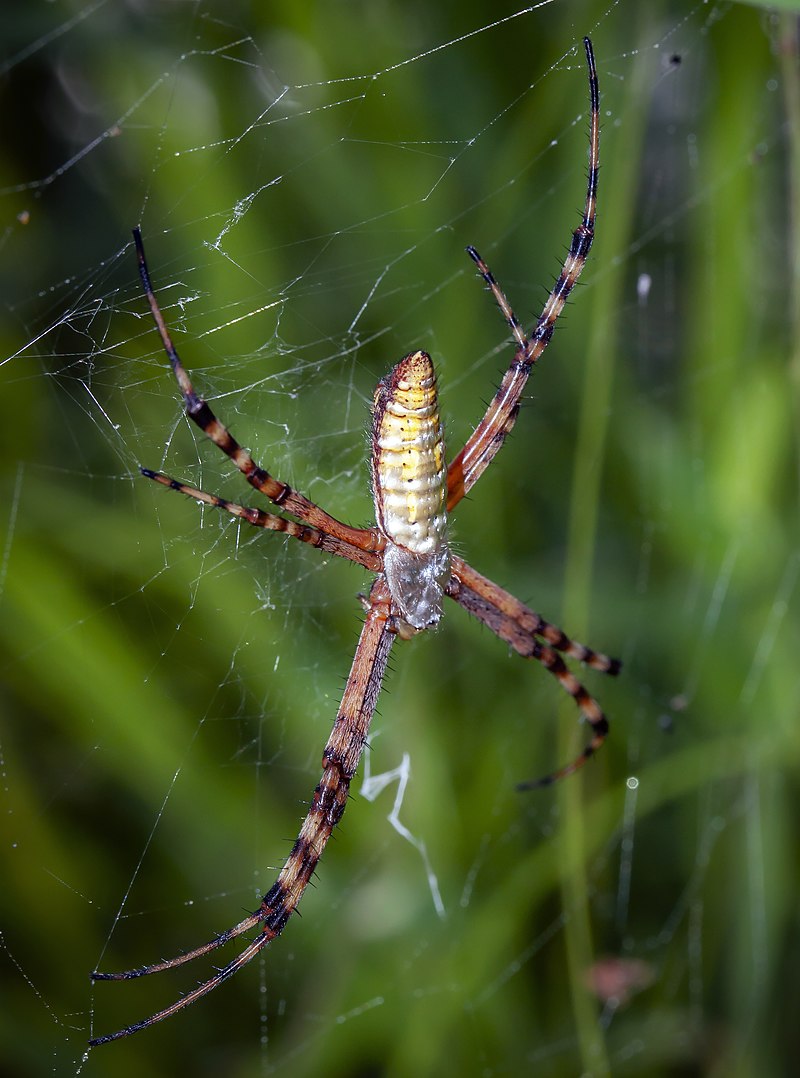 Banded garden spiders spin webs which can be up to 60cm in diameter. The web is determined by the size of the spider with webs reaching up to two meters.

These lie-and-wait spiders patiently sit in their webs, waiting for insects to get trapped in the web, before it insects its venom to paralyze the insect, covering it in silk until it is ready to be eaten.

Silver garden orbweavers can grow to 12mm for females, three times the size of the male.

They have a unique UV light that reflects off their body and web, which could be used to attract pollinating prey, such as bees.

These spiders prefer dry and human environments and have set steps when it comes to capturing prey.

The spider uses its vibration receptors to identify when prey is captured in the web, they then bite the prey and carry it to a place of safety in the web, where they can eat at their leisure.

As with other garden spiders, these do eat wasps and bees that become entangled in their webs, covering the prey in silk and injecting it with venom to subdue it, so the spider can eat it when they are ready. 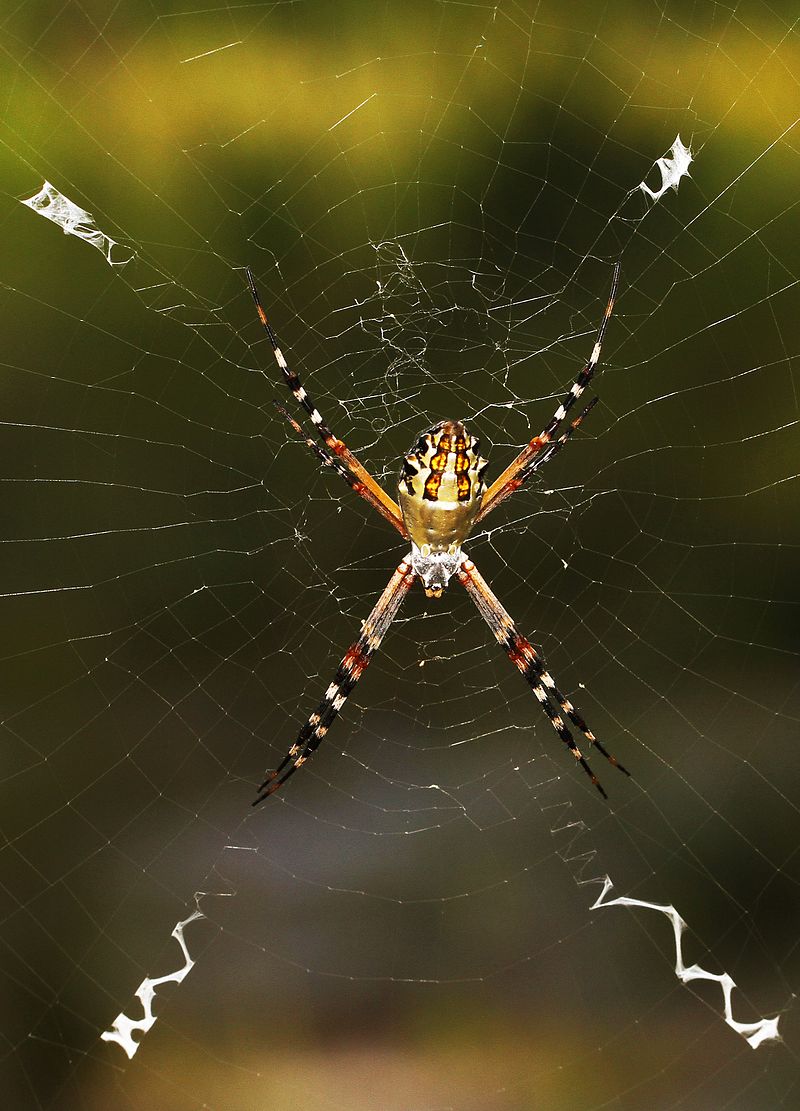 Florida garden spiders are part of the orb-weaver family and are restricted to the southeast United States, where they build large sticky webs, which they use to capture and eat their prey, using their venom, which insects a paralyzing chemical that helps the spider manipulate the prey and keep it for later feeding.

Black tunnel web spiders are very distinct when it comes to males and females.

Females grow to 30mm in body length with a yellow or orange black head space and orange-brown legs. The abdomen is purple-black with chevron markings.

Males have a darker head space with dark red to brown legs and a purple to black abdomen. Their front legs are longer, which is used to hold onto the female during breeding.

These spiders make long tunnel-shaped webs that are not sticky and are often hidden under rocks and logs. There is an opening with wider silk which is used to catch prey.

They feed on anything that comes close enough to their webs, including wasps and bees.

These spiders have black and silver on their abdomen with a black head space. When they are born they are completely silver and change to include some black as they age. The silver reflects UV light, which makes them visible.

They are often seen in mountainous areas, suburban areas, and in farmland, along with being observed on the edge of wood and bamboo forests where sunlight is abundant.

Their primary diet is small flies, though they will eat wasps, bees, and ants. They sit and wait for prey in their webs.

Northern crab spiders are common in North America and are a flower spider species, usually hunting in flowers that are similar in color to their body, waiting to capture wasps, bees, and flies.

Their legs, head space, and abdomen are covered in short stiff hairs with red streaks on their abdomen and a V mark that points towards the back. Legs are yellow with red on their tibia and metatarsus.

These are ambush spiders. They wait in flowers for insects to come close, using their long front legs to capture the prey, as they bite and inject them with a chemical to help them ensnare and move the prey back to their webs.

Goldenrob crab spiders have flat bodies that are wide with the ability to walk forwards, backward, and sideways. Their front legs are long and held open, which is used to capture prey.

The Goldenrod crab spider is white or yellow, depending on the flowers they are hunting on, giving them excellent camouflage.

Females are lighter in color with white or yellow and dark on the sides, sometimes there is brown or red on the abdomen.

Males are darker and have red or brown shells. Males also have red and white bands, both laterally and dorsally.

They inhabit forested areas and can be found on plants and flowers, including goldenrod and milkweed. 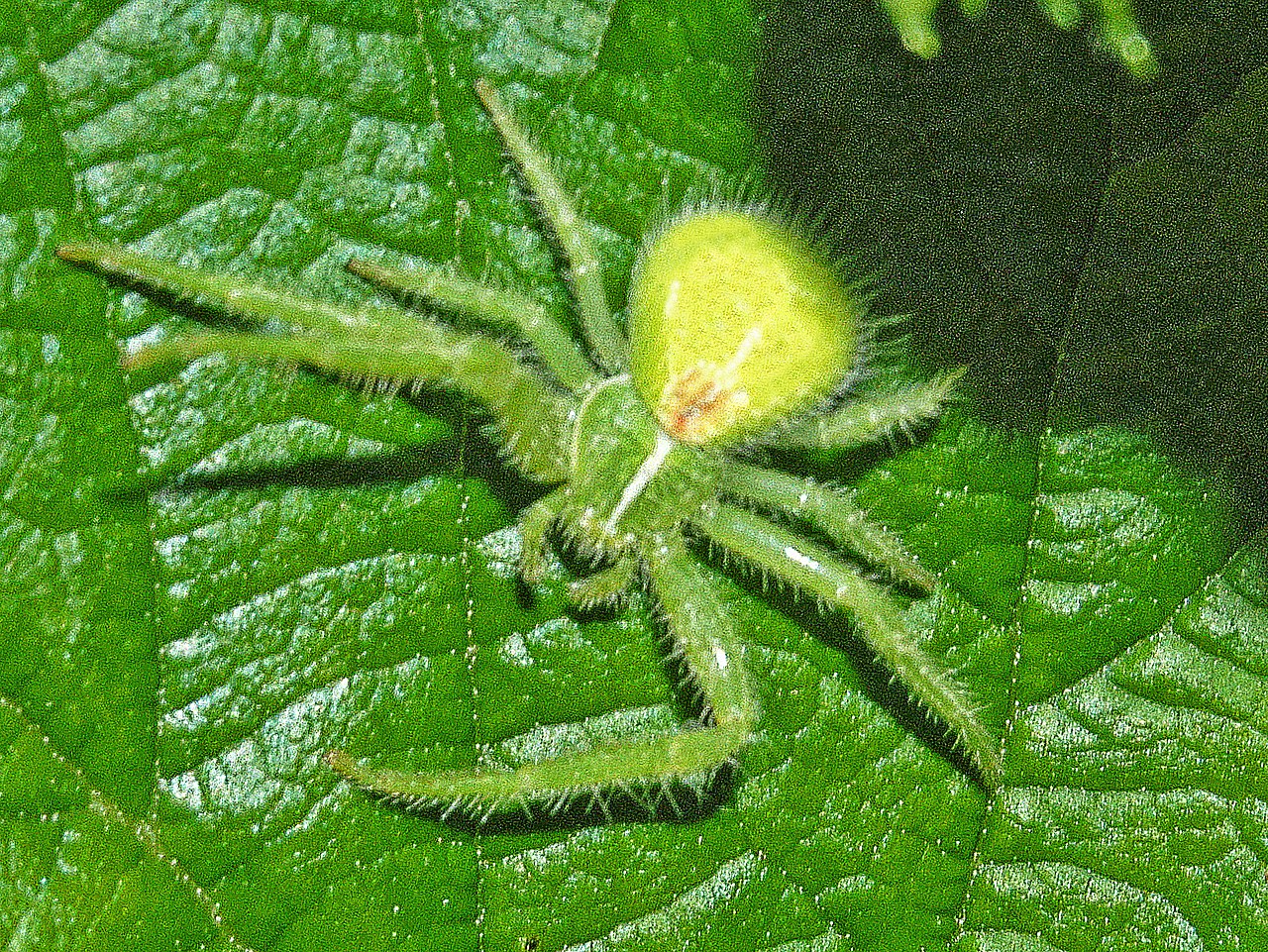 They are pale green with a pale yellow to light green abdomen and green legs. There are white bristle hairs on the legs and body.

They are common in bushes and woodlands where there is an abundance of sun, often seen on trees, shrubs, and plants. 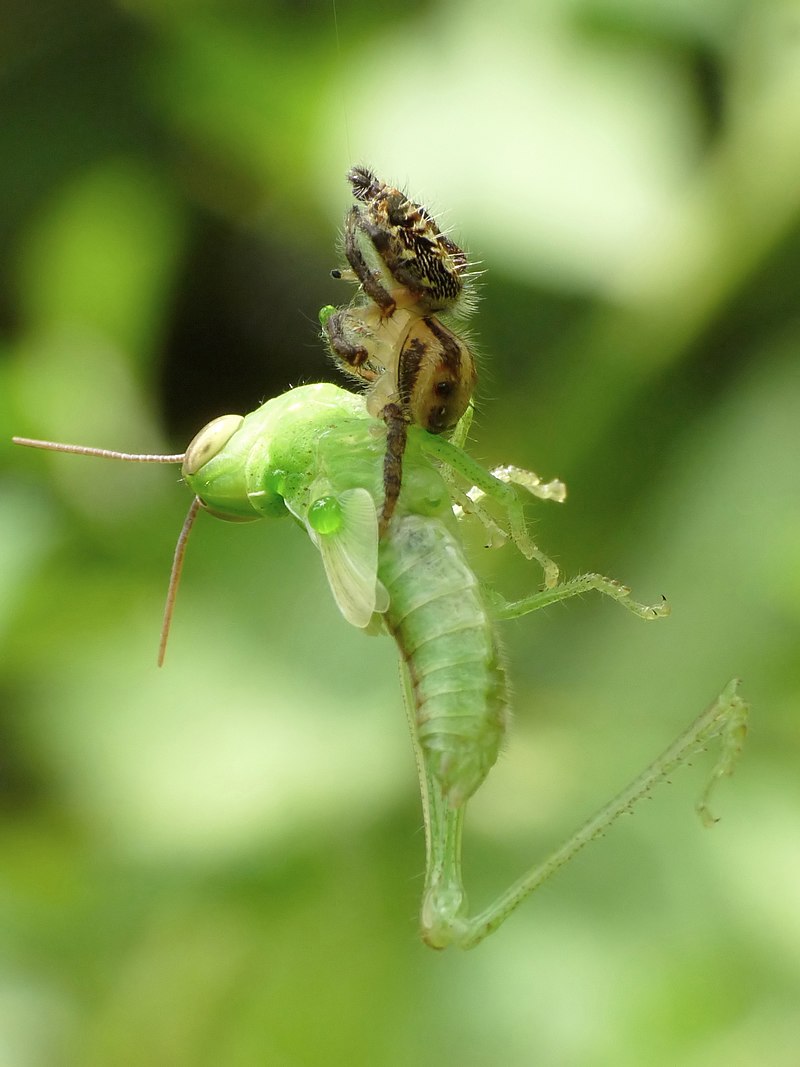 The heavy-bodied jumper is a member of the jumping spider family with females growing to 9mm in body length.

These spiders have the ability to jump up to four to five times their body length, which they use as an ambush tactic.

Their webs are used as somewhere for the spider to hide and to eat its prey.

They use their fast jumping to pounce on their prey, flinging one single silk to entangle the prey before they bite it, cover it in webbing, and drag it back to their web. 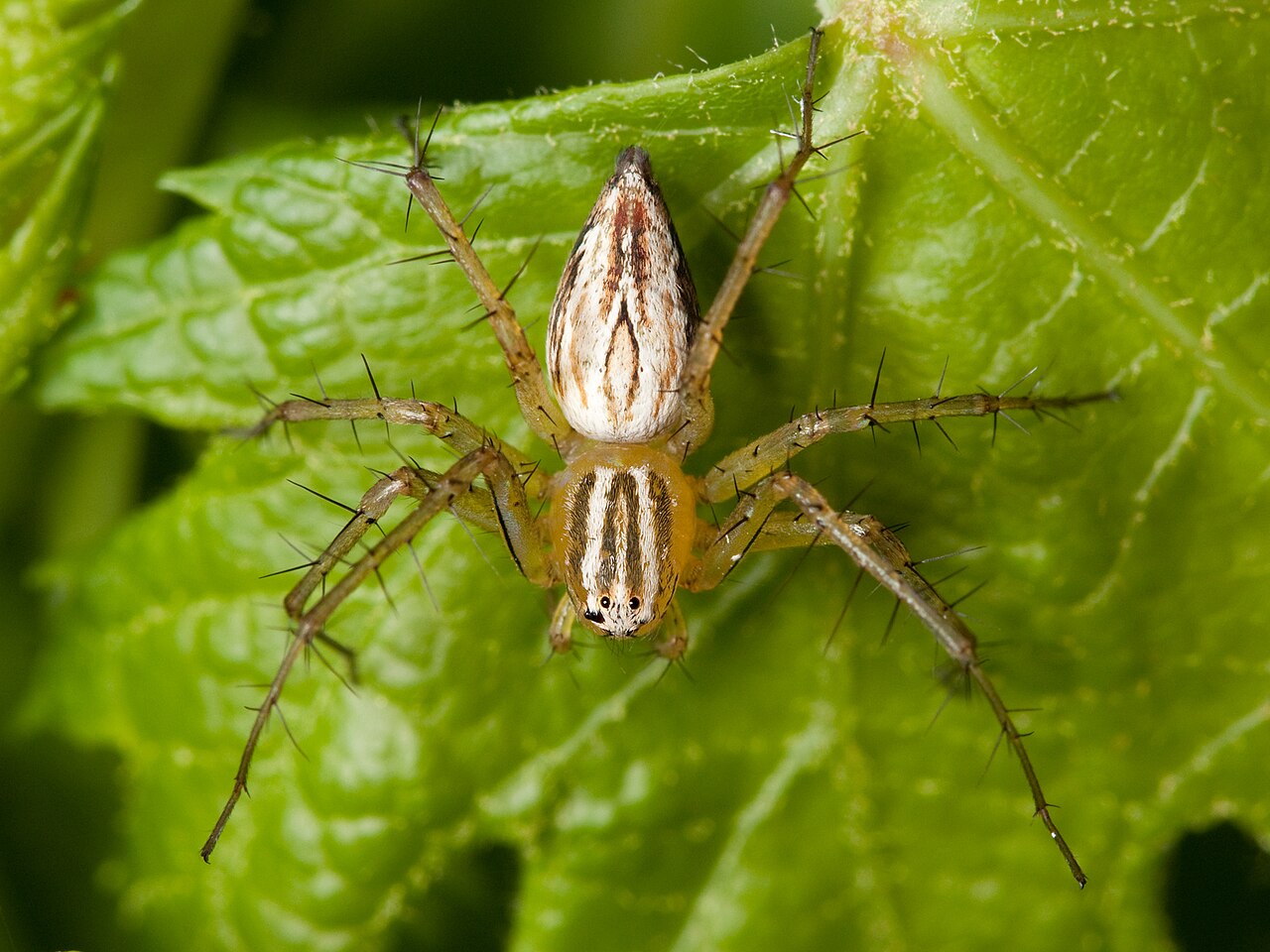 They are cream, brown, or orange with females having stripes on their abdomen and head space. 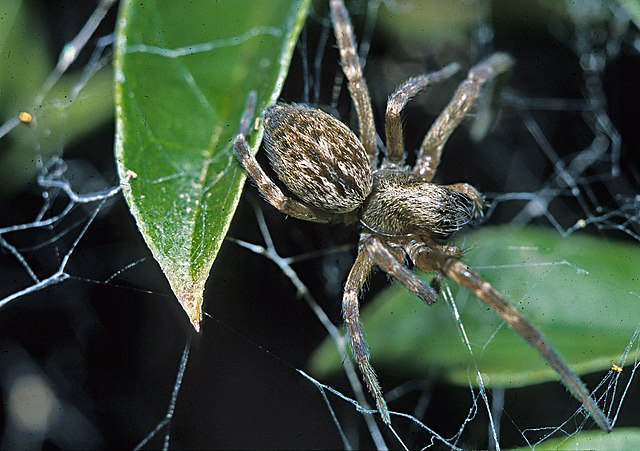 Their abdomens and head space are covered in light gray hairs and spots, with purple to brown colored hairs on the legs, which are in stripes.

They are common in homes and are seldom found in wild habitats. They create messy webs on window frames, corners of ceilings, under furniture, and benches. They are web builders and wait for food to come to or near their web before capturing it.

Bees and wasps that accidentally get entangled in the sticky web are rushed at and bitten, while the prey is further entangled, making it unable to move.

White crab spiders can change their color from white to yellow, which helps them hide from predators and stalk prey in daisies that are similar in color to themselves.

Their bodies reflect UV light, which attracts bees to the flower.

They grow to 30mm including the legs.

Their abdomens are pentagonal in shape with two bumps on them. Their legs look similar to a crab.

These spiders are excellent pest control and eat a host of insects from bees to butterflies to crickets and flies. The white crab spider sits on flowers, ambushing any prey that arrives. 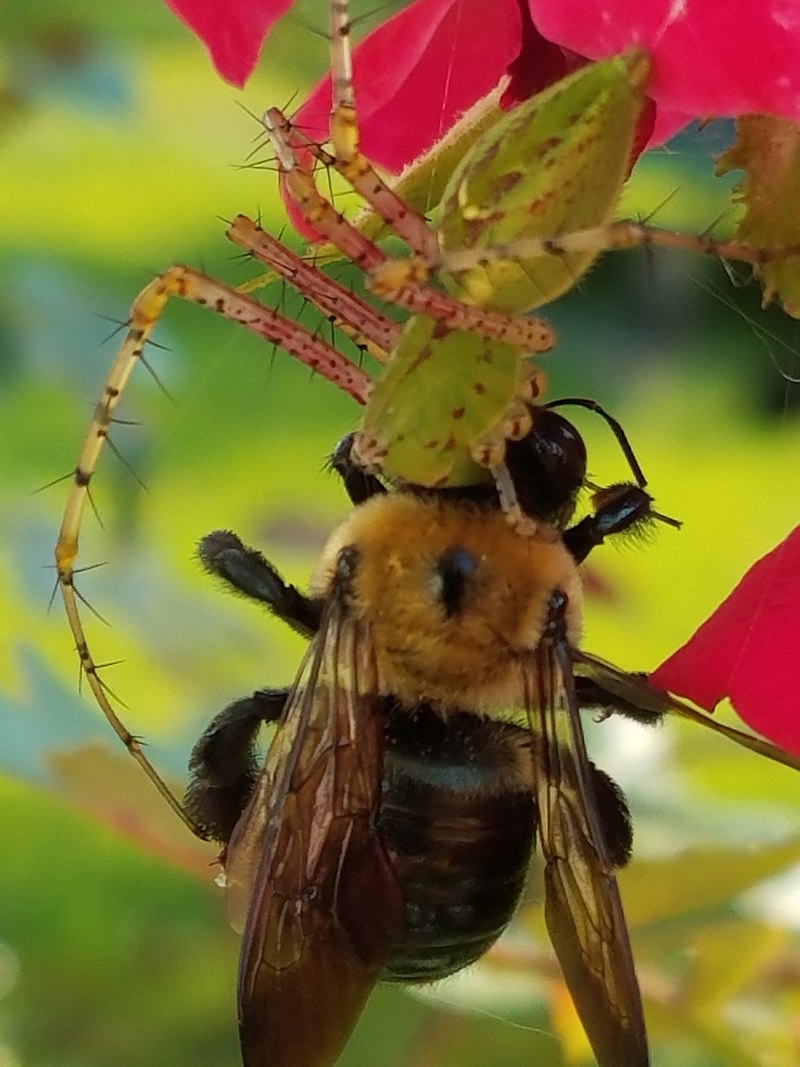 Female green lynx spiders can grow to 0.87 inches (22mm) in body length, while males are smaller, growing to around 0.47 inches (12mm) in length.

These spiders have red patches between their eyes and on their bodies.

Their eyes have white hairs, while the abdomen has six chevron markings, where the centers point forward.

They have green or yellow legs with black spots.

They can change color from green to pale yellow with red streaks. Gravid females can change their color for around two weeks, helping them blend in with their environment. 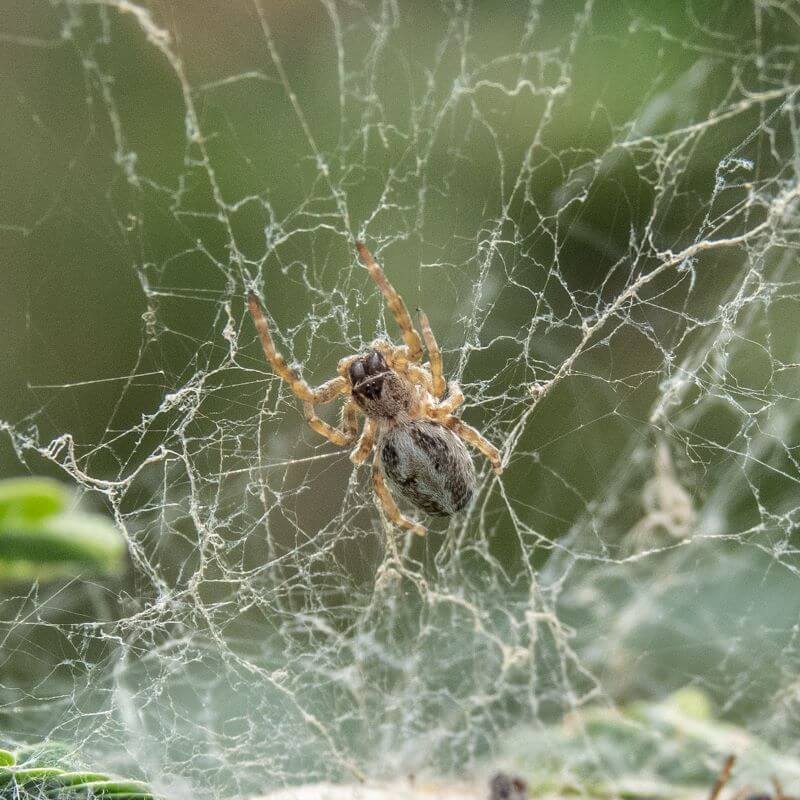 The Indian cooperative spider is a short spider with fine hairs. The hairs make the spider look ash-colored with longitudinal white stripes on their abdomens with six pairs of dots.

They are commonly found in prickly pear bushes or trees, bushes, and fences which are sturdy for their web construction.

They prefer shaded areas and are often found along river banks, where there is a permanent water source that attracts insects. Once an insect gets ensnared in their web, the spider hurries over to pull it to their next.

These spiders are known for their communal feeding, where spiders share the food, even if they didn't take part in the capture. 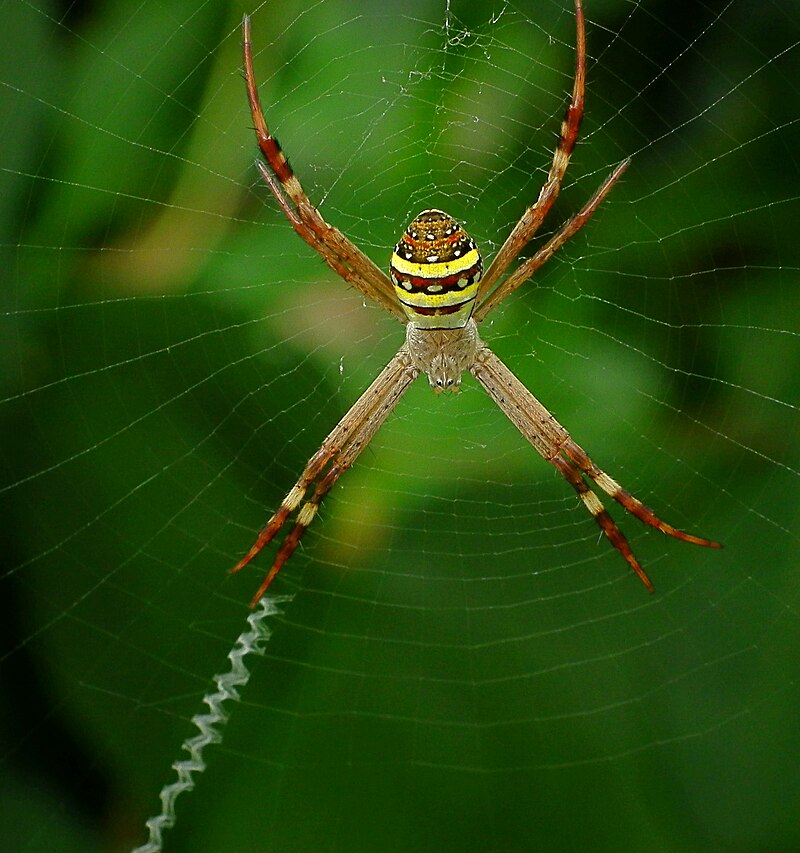 The St Andrews cross spider has a silver, red, yellow, and blank banding on its glossy head space with two yellow belts below.

Females can grow to 16mm in body length, while males grow to 4mm are brown in color.

Their webs are usually constructed on low vegetation, where it is able to catch an abundance of insects from flies and butterflies to bees. They are part of the orb-weaver family and will wrap their prey in silk before they eat it. 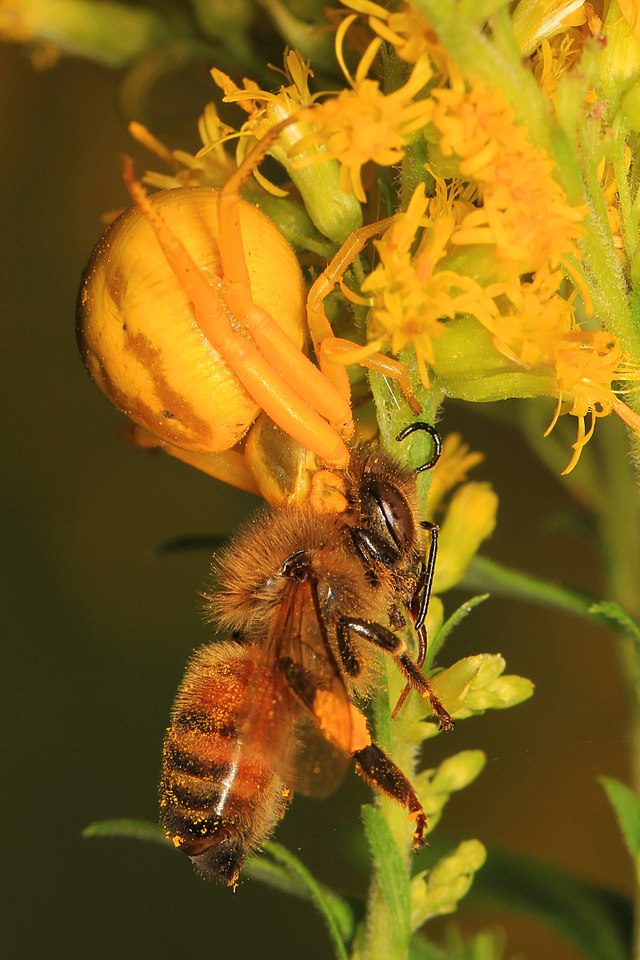 White-banded crab spiders have a white line that runs through their eyes.

They are sit-and-wait predators that will capture pollinators that visit the flowers or plants where the spider is hiding in wait.

Their strong front legs help them seize their prey with females being larger than the male.

Females change their body color from white to yellow and vice versa, depending on their environment, while males remain one color throughout their lifetime with darker front legs and a golden abdomen.

They do not build webs but wait in flowers to catch pollinators. 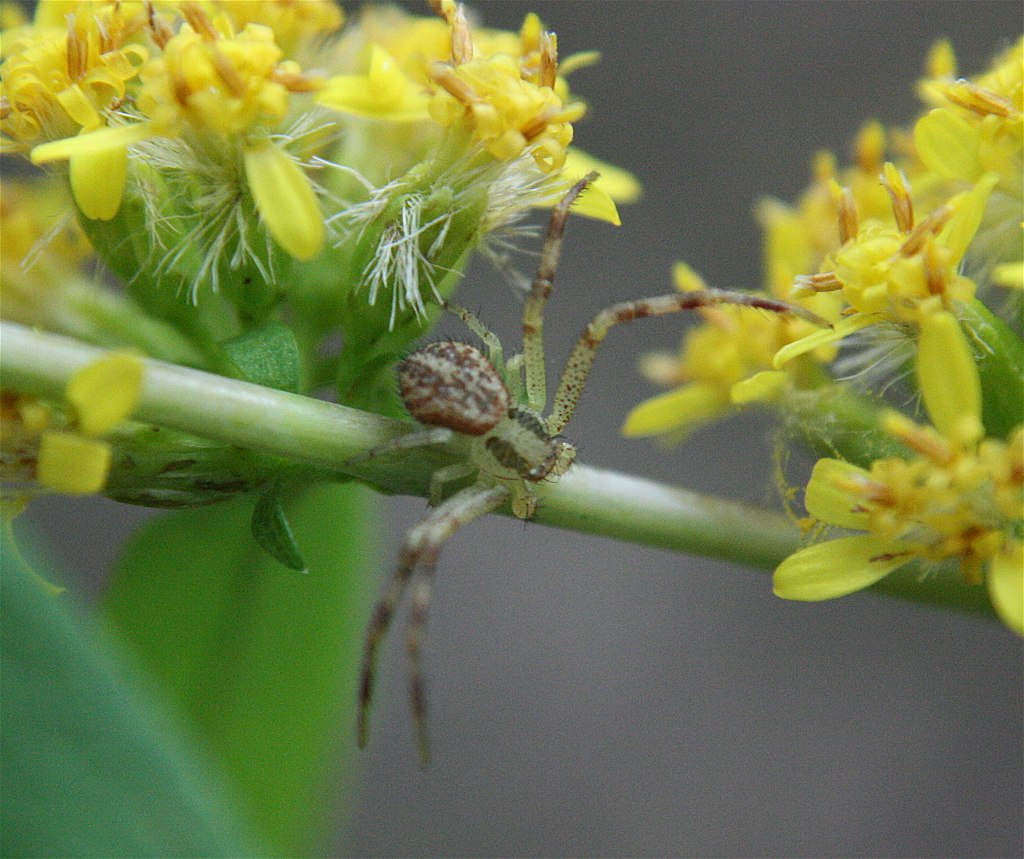 Swift crab spiders belong to the Thomisidae family and can be identified for their long front legs and short back legs.

Females are easier to identify and are yellow in color with round abdomens.

These spiders live close to flowers and prey on pollinating insects. They are often seen on small trees, bushes, and shrubs. 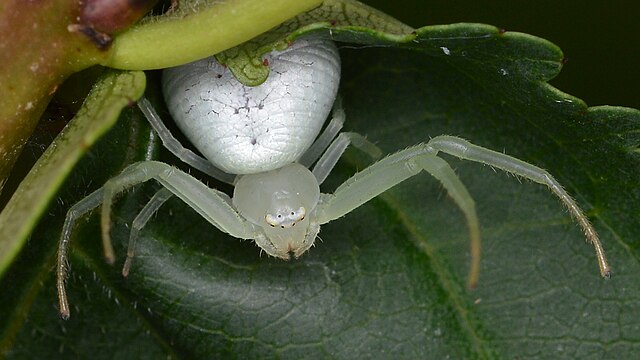 American green crab spiders have the ability to walk forwards, backward, and sideways.

They have long front legs, which they use to grab their prey, which is collecting pollen from the flower where the spider is hiding in wait. The second pair of legs are larger, stronger, and longer than the others.

These spiders are bright green and due to their tiny size, they can hide in flowers in plain sight. Their abdomens are diamond-shaped and there is sometimes some red banding on the abdomen.

Spiders all play a vital role in the environment and even if they are scary, they are important to the ecosystem.

While most spiders are afraid of wasps, wasps are spider predators with some wasps using spiders to feed their young, such as the Spider Wasp.

The spiders that do eat wasps and bees have web-making skills or excellent ambush skills, which enables them to catch the wasp or bee without being stung.